Control charts play a vital role in monitoring processes and are used to remove assignable causes that are responsible for substandard products (or services), wastes, reworks, and high production or manufacturing costs. Shewhart [1] introduced control charting techniques in the 1920 and showed that these can be applied in different industries. Shewhart-type control charts are very famous for monitoring processes in different areas of productions due to their easy implementation and high speed in detecting large shifts. They are usually referred to as memoryless charts because they only use the current information. Since Shewhart-type charts are efficient in detecting large shifts, researchers have designed new control charting techniques to efficiently detect small-to-moderate process shifts as quickly as possible, including large shifts. These are referred to as memory-type control charts as they use the current and past information to compute the charting statistics, which makes them more sensitive in identifying small–to-moderate shifts. More specifically, Page [2] and Roberts [3] designed the cumulative sum (CUSUM) and the exponentially weighted moving average (EWMA) control charts, respectively. The properties of EWMA control chart have been studied by many researchers in the statistical process control (SPC) area. A lot of modifications to the EWMA chart have been introduced in the literature to enhance its performance in detecting small-to-moderate shifts. References [4,5] proposed the double EWMA (DEWMA) chart with asymptotic control limits. Later on, a lot of researchers worked on DEWMA control with different techniques. Shafqat et al. [6] proposed the DEWMA chart with asymptotic control limits based on linear prediction. Capizzi et al. [7] presented the adaptive EWMA control chart to detect instantaneously small-to-large magnitudes of shifts. Zhang et al. [8] studied DEWMA under time-varying control limits with different values for the smoothing parameters. More basic information about the control charts can be found in [9–12].

2  The Design Structure of the Neutrosophic Control Charts Structure

2.1 The Design Structure of the Proposed NDEWMA Chart

Let Xi be a quality characteristic of a process whose distribution is normal with mean and variance ( and be a sequence of independent and identically distributed (iid) observations from the process, where XLi and XUi are the minimum and maximum values of indeterminacy interval. When the process is in-control (IC), then ; otherwise, or .

In this study, we are interested in the detection of shifts in the process mean from its IC value to an out-of-control (OOC) value for assuming that the process variance is IC and remains unchanged. The NDEWMA chart is based on current and past observations with the NEWMA plotting statistic applied as an input in another NEWMA statistic. The charting statistics of the NEWMA can be expressed as:

where and thus, the NDEWMA charting statistic is given by:

and . Note that denotes the neutrosophic smoothing constant. The starting values are typically defined as . Hence, the asymptotic mean and variance of the NDEWMA chart for large values of i can be written as:

where . Here kN is control limits coefficient which is customarily taken corresponding to the desired value of IC ARL.

2.2 The Design Structure of the Proposed NTEWMA Chart

The NTEWMA chart is based on current and past observations with the NEWMA smoothing procedure utilizes sampled information three times which can be mathematically defined as:

where and ZNi is as defined in Eq. (2). Note that denotes the neutrosophic smoothing constant and the starting values of . Hence, the asymptotic mean and variance of the NTEWMA chart for large values of i can be written as:

where and . The control limits of the NTEWMA control chart were obtained using individual measurements. Note though, if subgroups of nN > 1 are collected, then simply substitute XNi with the sample mean and with .

1.    Specify the values of the smoothing parameter and parameters of the distribution (say, and ). Generate random samples with and from a normal distribution that is . Initially, if the process is IC.

3.    Calculate the plotting statistics ZNi and WNi for each random sample using Eqs. (2) and (6).

4.    Compare the plotting statistics calculated in Step 3 to their respective control limits found in Step 2. Proceed until a point plots for the first time beyond the control limits and record the number of rational subgroups as one value of run length.

6.    Calculate the neutrosophic mean, the standard deviation of the run-length (RL) and the percentiles of the RL obtained in Step 5 to get the NARL, NSDRL, , and NP75. If the attained NARL0 is equal to the specified NARL0, record the control limits and design parameters (these are considered as optimal design parameters and control limits). Otherwise, adjust the value of kN and repeat Steps 1 to 6 until NARL0 is equal to the specified NARL0 value.

7.    Next, generate random samples and use the optimal design parameters and control limits to evaluate the OOC characteristics of the run-length using Steps 3 to 6 by introducing a shift () in the process location and calculate the NARL, NSDRL, NP25, NP50 and NP75.

Note that the design parameters () of the NDEWMA and NTEWMA charts are selected in such a way that the target (or desired) NARL0 value is obtained.

The control chart is the fundamental method of the SPC for checking the technical analysis of any industrial process monitoring. The performance of the control chart is evaluated using the run-length distribution, which is the most famous method used to check the control chart’s ability to identify the exact value of the run-length characteristics at each value. In this paper, we have used the nominal NARL equal to 500 to compute the run-length characteristics under the standard normal distribution, i.e., N(0, 1). To evaluate the OOC run-length distributions, the shift in the process is expressed in terms of the standard deviation, i.e., where denotes the scale of shift. The values of NARL1using the Monte Carlo simulations algorithm in Subsection 3.1 are presented in Tabs. 1 and 2 for the NDEWMA chart and Tabs. 3 and 4 for the NTEWMA chart. More specifically, the first row of each cell shows the NARL values, second row of each cell shows the NSDRL and 3 to 5 rows of each cell show the percentile points (NP25, NP50 and NP75) of the run-length distribution. Tabs. 1 and 2 present the results of proposed NDEWMA control chart when and respectively, for the same values of . Tabs. 3 and 4 present the results of proposed NTEWMA control chart when and respectively, for the same values of . From Tabs. 1–4, it can be seen that for the same design parameters, there is an increasing trend in the values of NARL1 when increase, for small shifts; however, there is a decreasing trend in the values of NARL1 when increase, for large shifts. Moreover, small values of are preferred over larger values when the detection of small shifts are of interest; however, moderate to large values of are more effective in detecting moderate to large shifts. In other words, when shifts increase, the NARL1 shows a decreasing trend when the smoothing constant is large. The NARL1 decrease as the values of ] increase, which implies that an increase in the neutrosophic sample size has a positive effect on the performance of the proposed control charts. 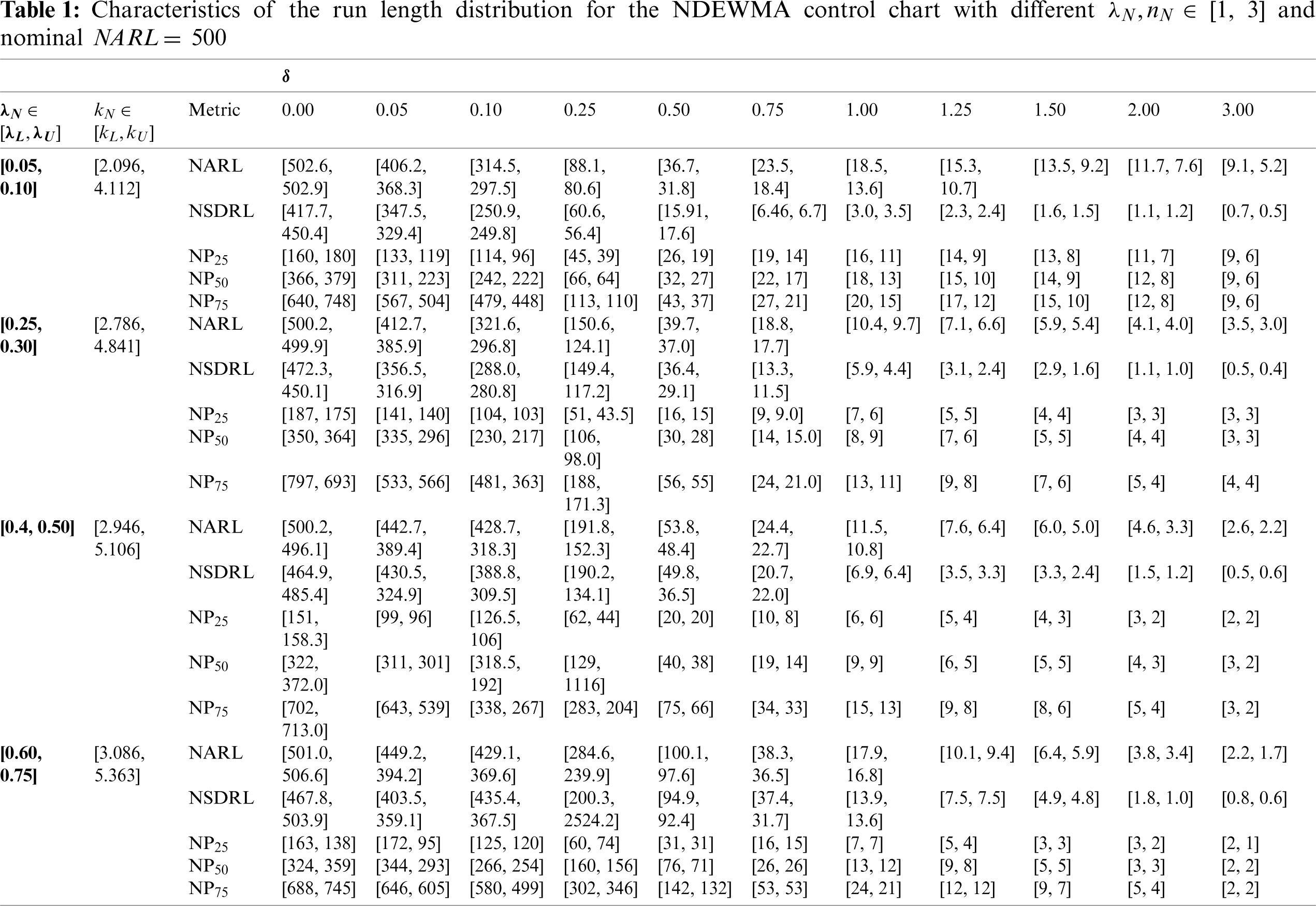 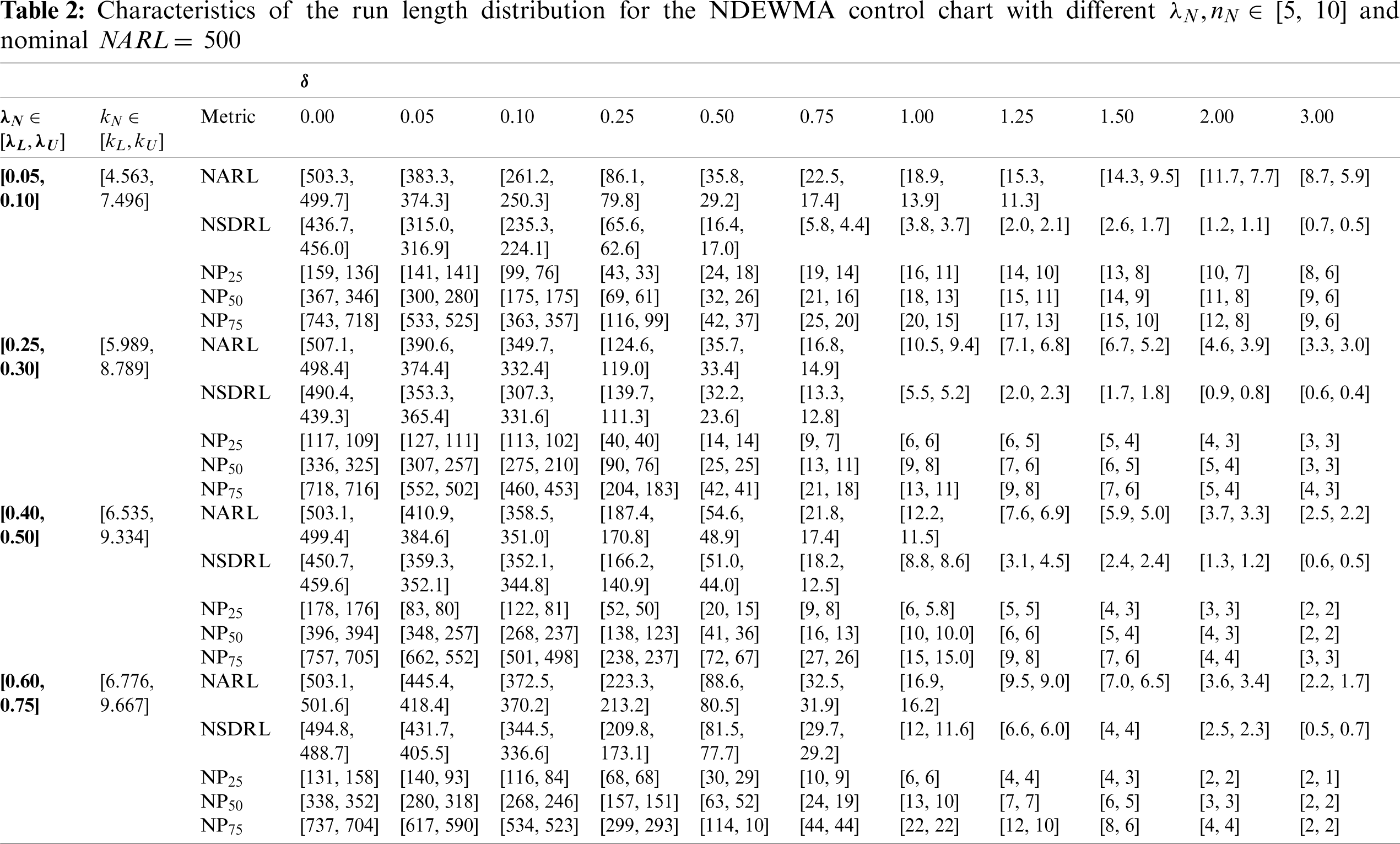 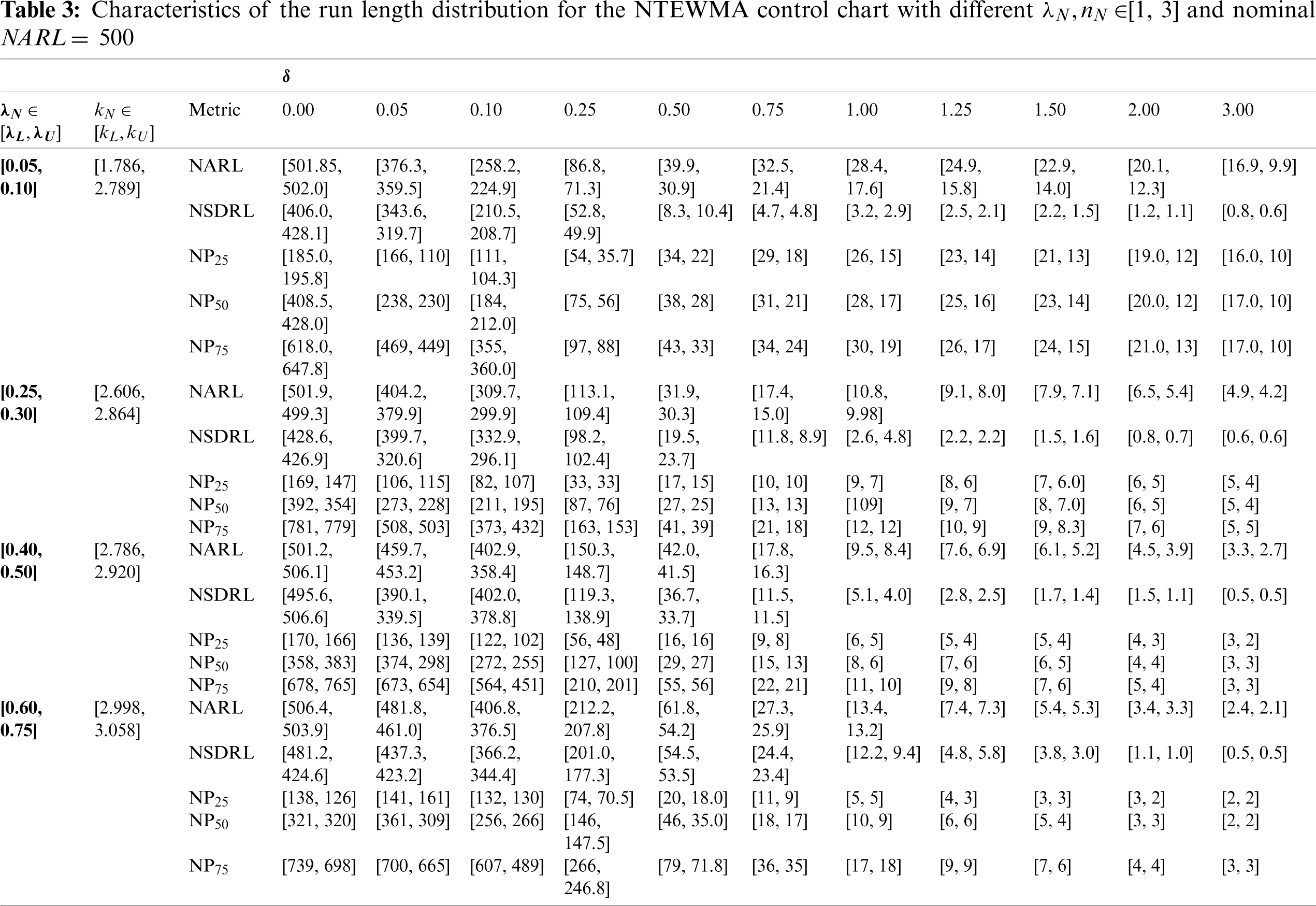 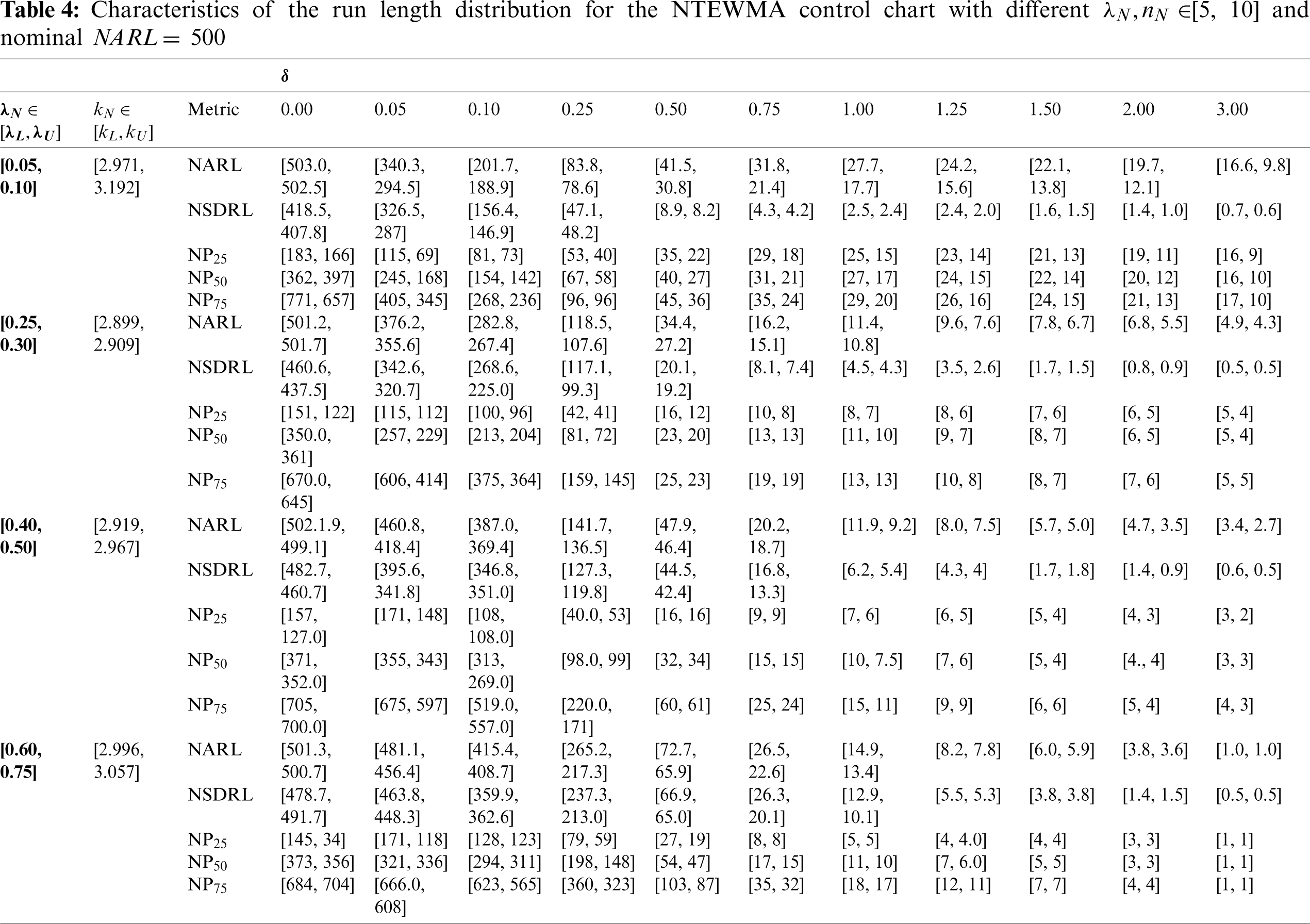 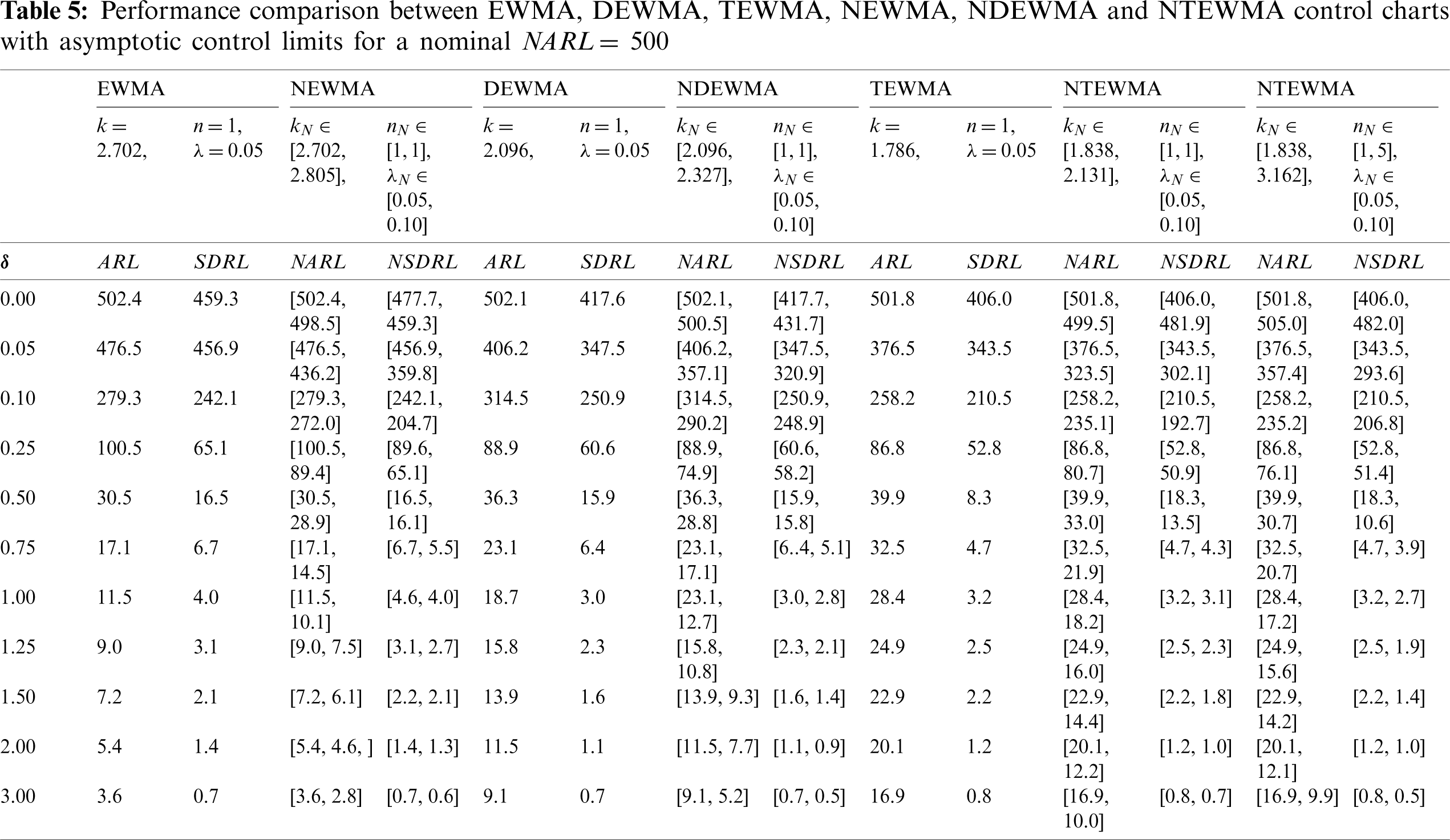 Perform better than the NEWMA chart for small to moderate shifts. Note though, the NEWMA chart has the best performance for large shifts as compared to the NDEWMA and NTEWMA charts.

For the simulated data, we suppose that and . Note that 200 observations of the process mean from the normal distribution are generated, the first 100 observations were generated assuming that the process is IC, with and and the next 100 observations are generated assuming that the process has shifted with . The simulated data along with as well as the and charting statistics are shown in Figs. 1–6. From Tabs. 1 and 3, the calculated NARL for NDEWMA chart is [31.3, 37.3] and the one for the NTEWMA chart is [29.9, 40.9]; thus, it is expected that the shift in the simulated data of the NDEWMA and NTEWMA charts should be detected OOC between samples 31 and 37 and between samples 29 and 40, respectively. Using the asymptotic control limits, we select and the control limits coefficients for the NEWMA chart are while those of the NDEWMA chart are and for the NTEWMA chart, . From Alevizakos et al. [27], the control limits coefficients of the EWMA, DEWMA and TEWMA charts are given by k = 2.702, 2.055 and 1.838, respectively. 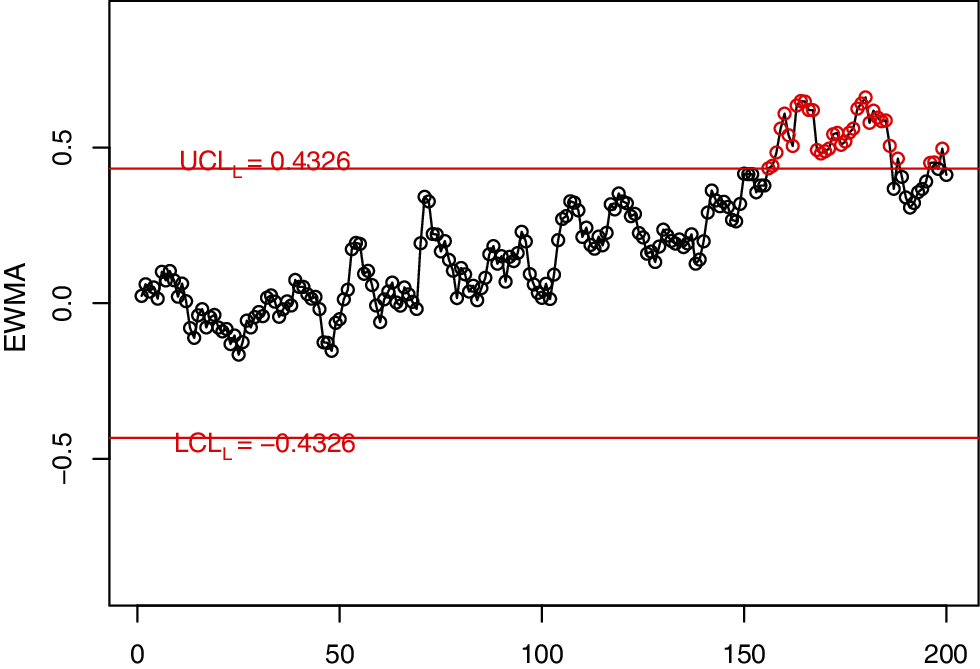 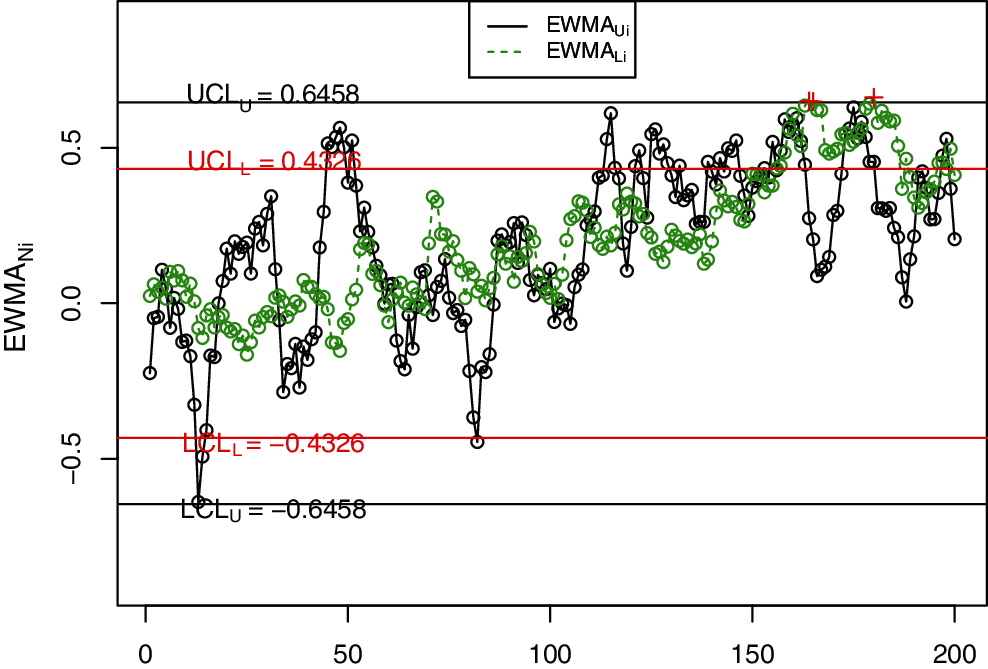 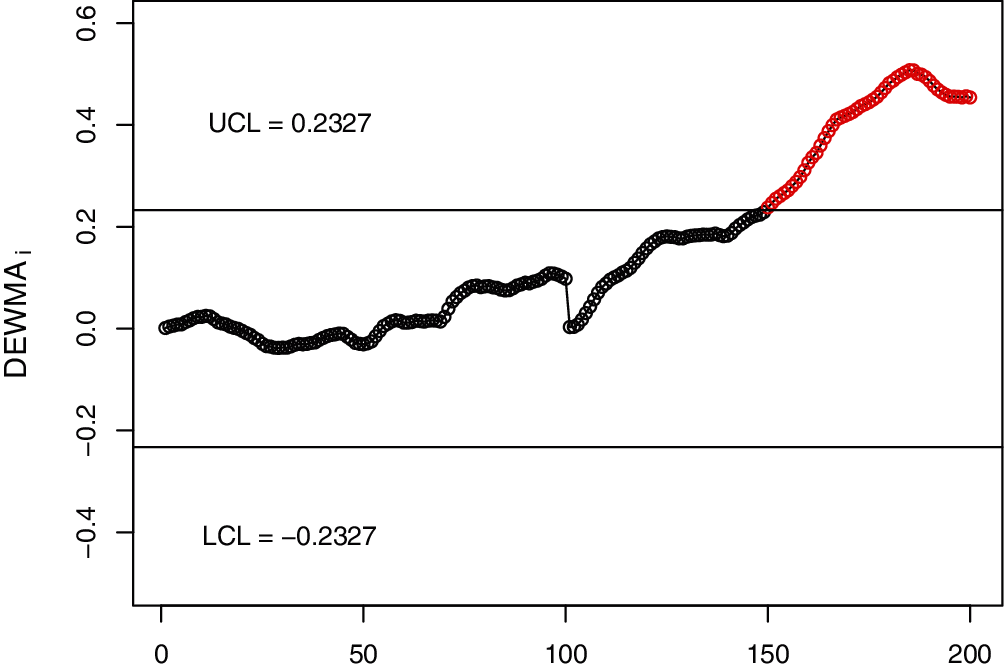 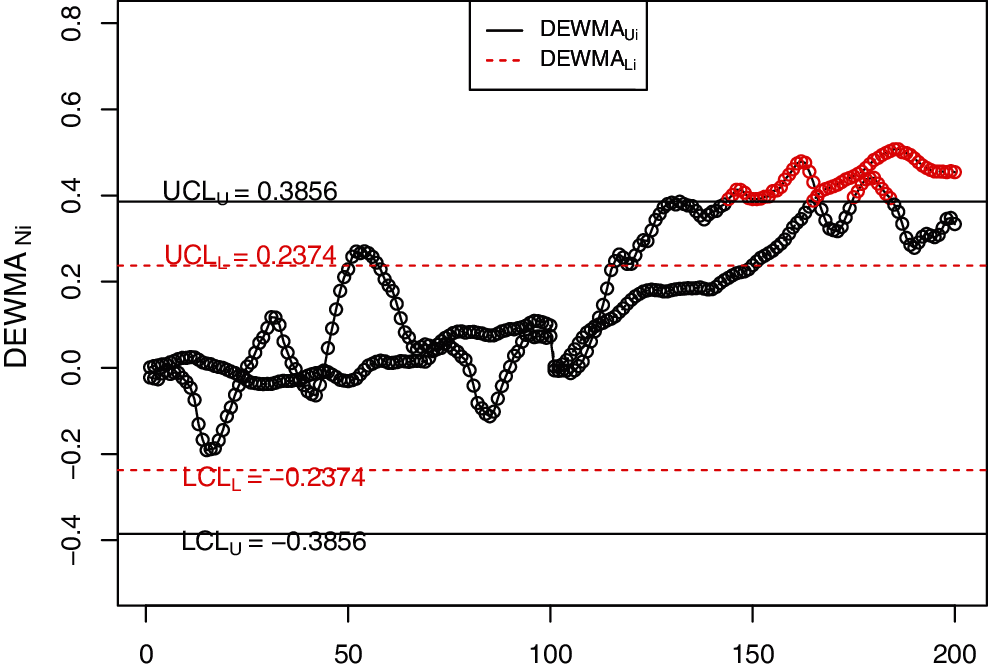 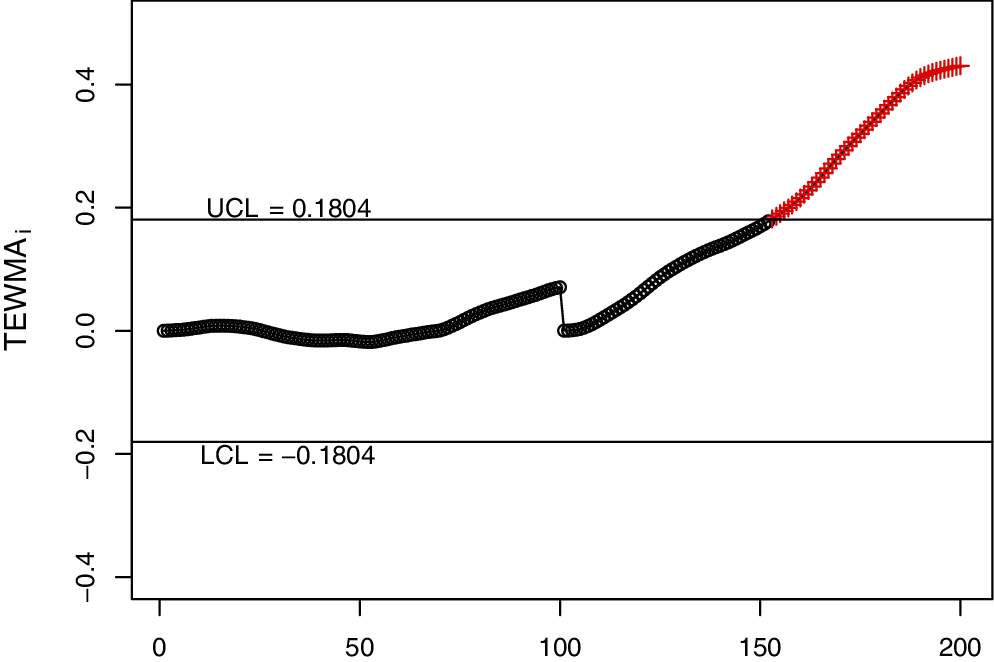 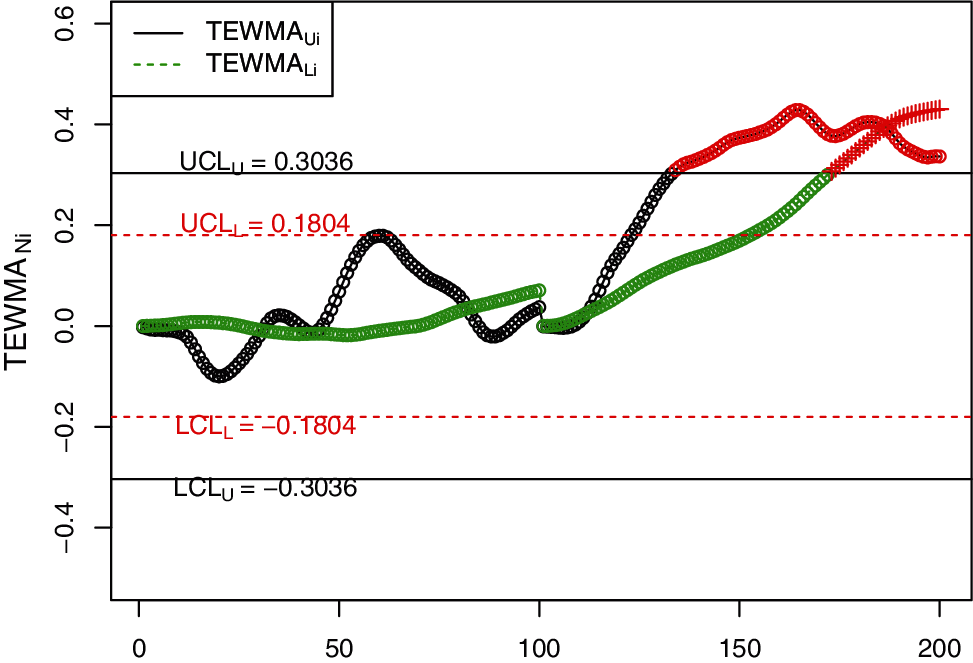 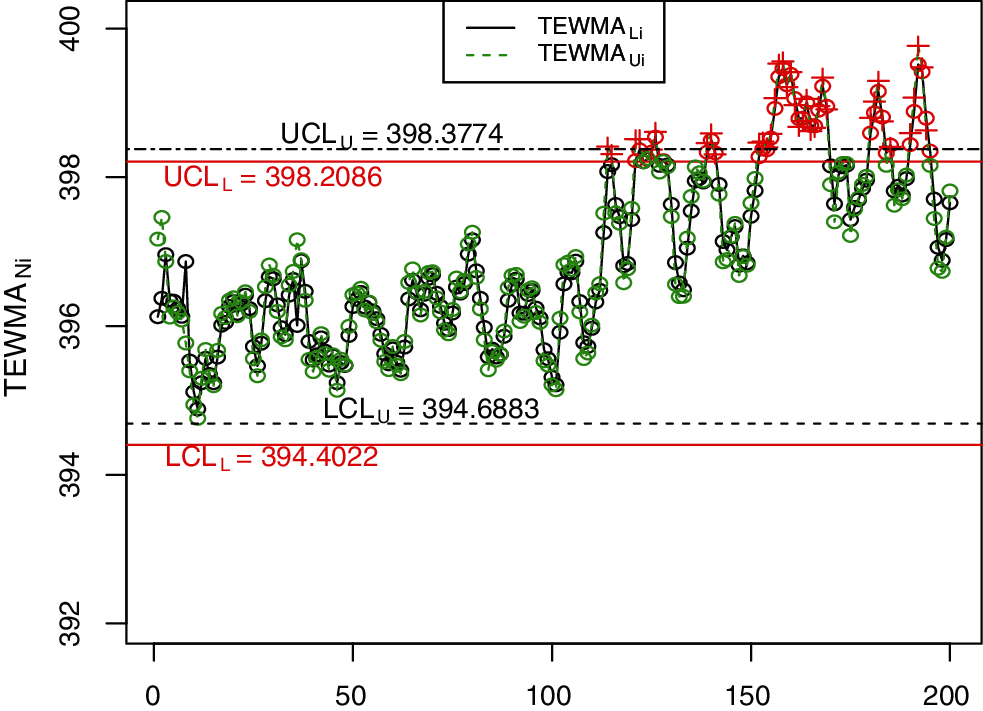 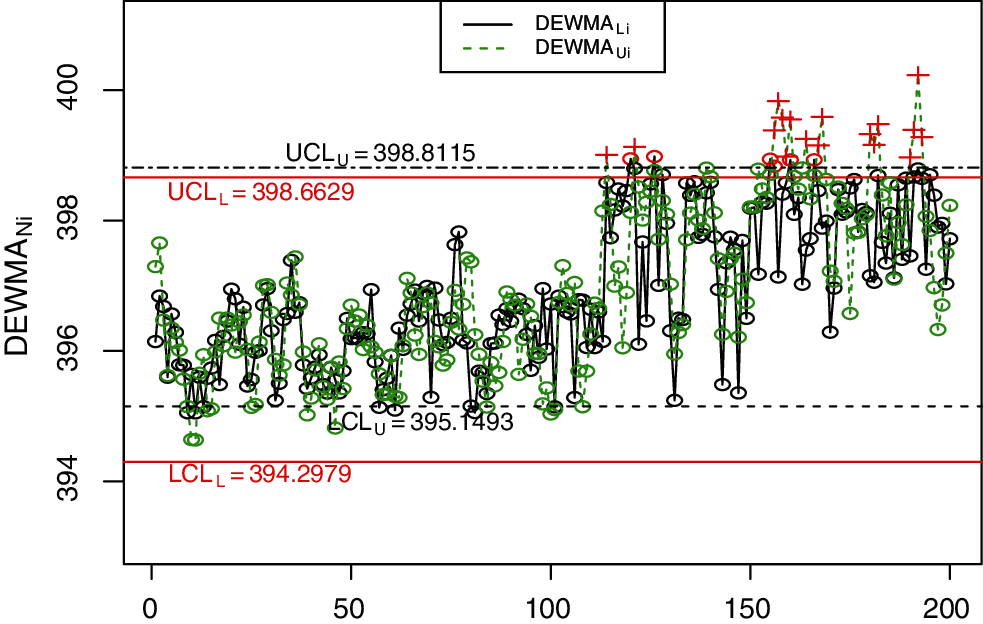 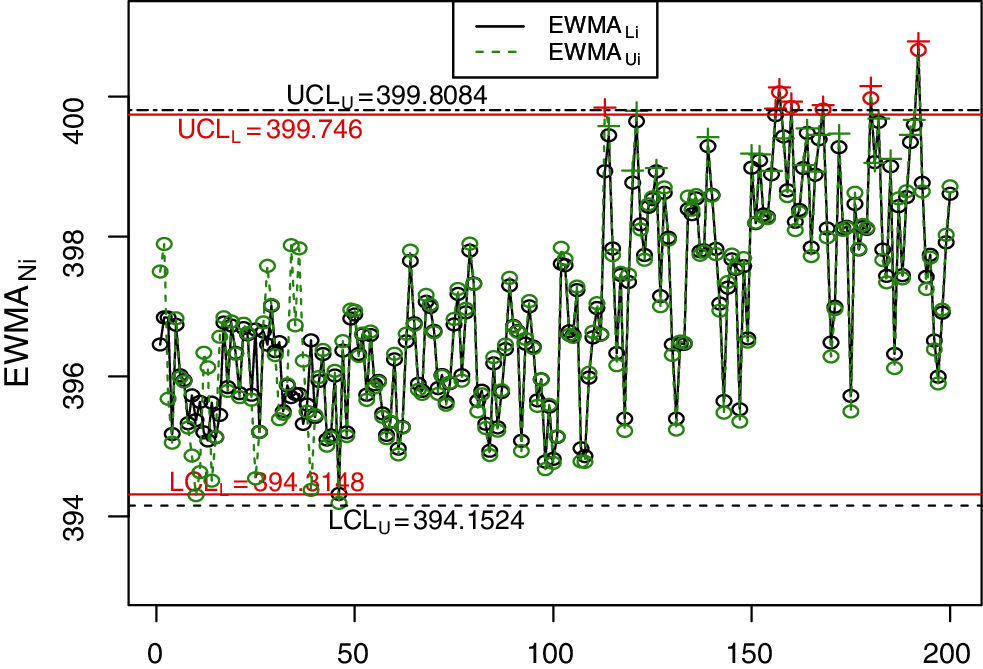 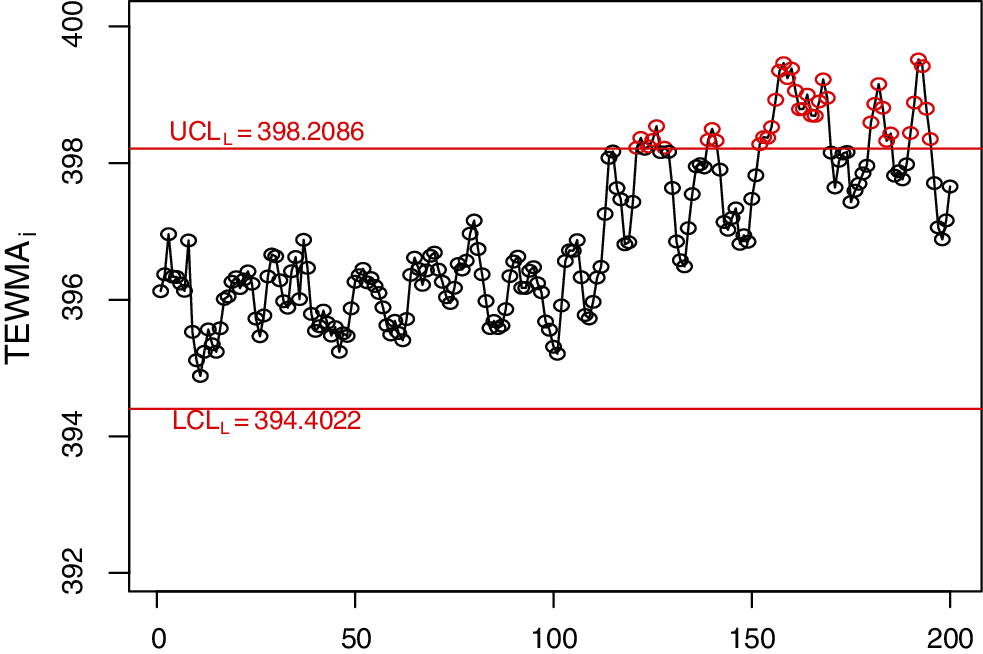 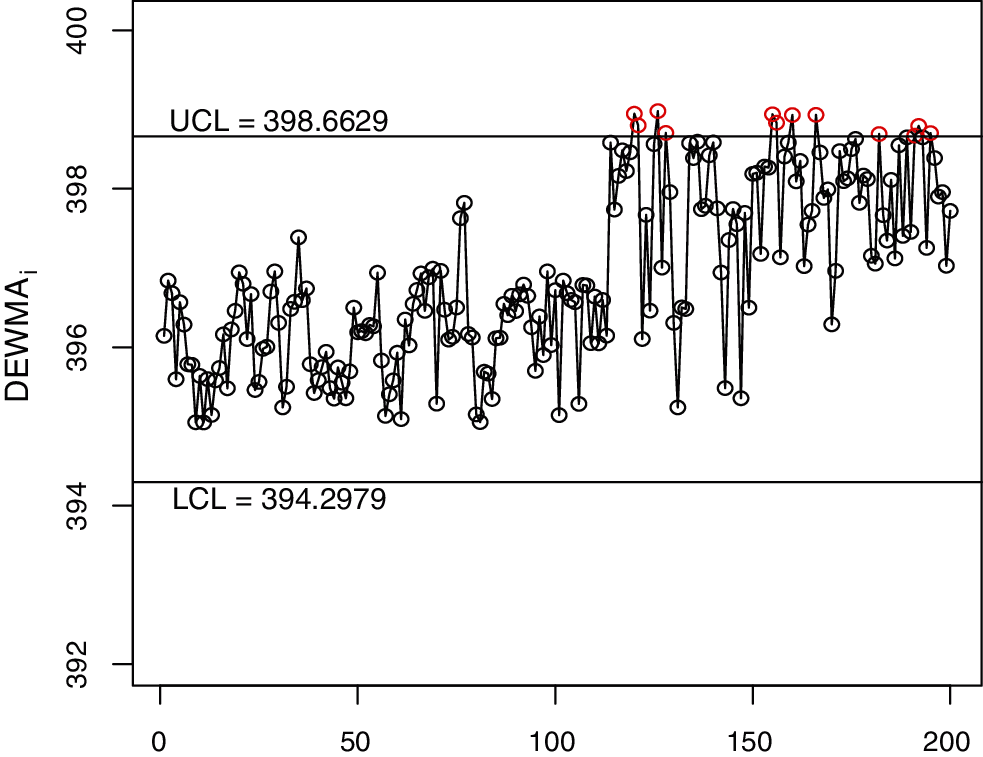 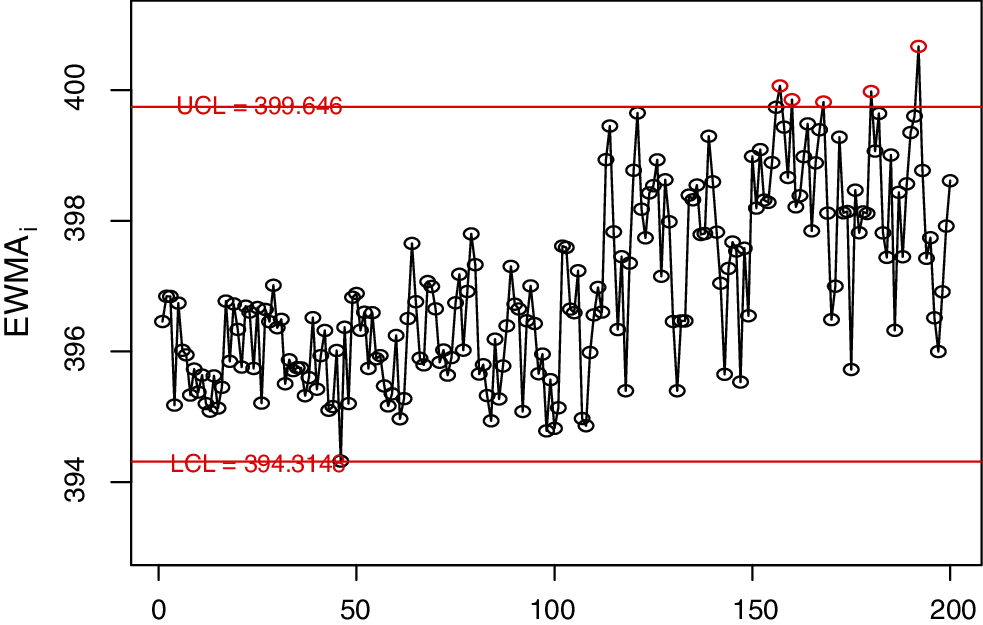 The traditional Shewhart chart is the most preferred monitoring scheme in detecting large shifts more quickly; however, for small-to-moderate shift detection, the EWMA, DEWMA, and TEWMA control charts have been shown to have better performance. In this paper, we proposed new NDEWMA and NTEWMA control charts under an uncertainty environment, and these are shown to outperform the existing NEWMA chart for small shifts detection. We studied its run-length performance using the asymptotic control limits under neutrosophic environments with neutrosophic Monte Carlo simulations in R software. The NTEWMA chart is more efficient in a wider range of shifts as the value of the smoothing parameter increases. The results showed that the NTEWMA chart is very efficient in small shift detection when the smoothing constants are small. Finally, we applied the NTEWMA and NDEWMA charts as well as the EWMA, NEWMA, DEWMA, and TEWMA charts to simulated data and data from an electrical engineering process, where the results confirmed the findings.