To address these limitations, this study develops a novel 3D object detector and adaptive space division model to quantitatively infer traffic accidents, as illustrated in Fig. 2. This method assumes the availability of 2D region proposals in RGB images, which can be easily obtained from some object detection frameworks [5–7]. Then, a set of deformable frustums are generated based on 2D region proposals and point cloud. Different from [8], this method extracts frustum-wisely features based on FPS-Net and FE-Net, and then uses a subsequent ED-Net to down-sample and up-sample these frustum-wisely features. Together with a detection header, the proposed method implements an end-to-end estimation of oriented 3D boxes. Subsequently, ALSR is developed to separate bounding boxes, and then SST is used to discriminate whether the reduced bounding boxes overlap, which can achieve collision detection. Extensive experiments are conducted on two datasets, KITTI benchmark [9] and our SHTA dataset. As illustrated in Fig. 1, SHTA dataset is collected in Shanghai urban roads by using surveillance cameras and LIDAR, which contains 5,672 crash records in different conditions. 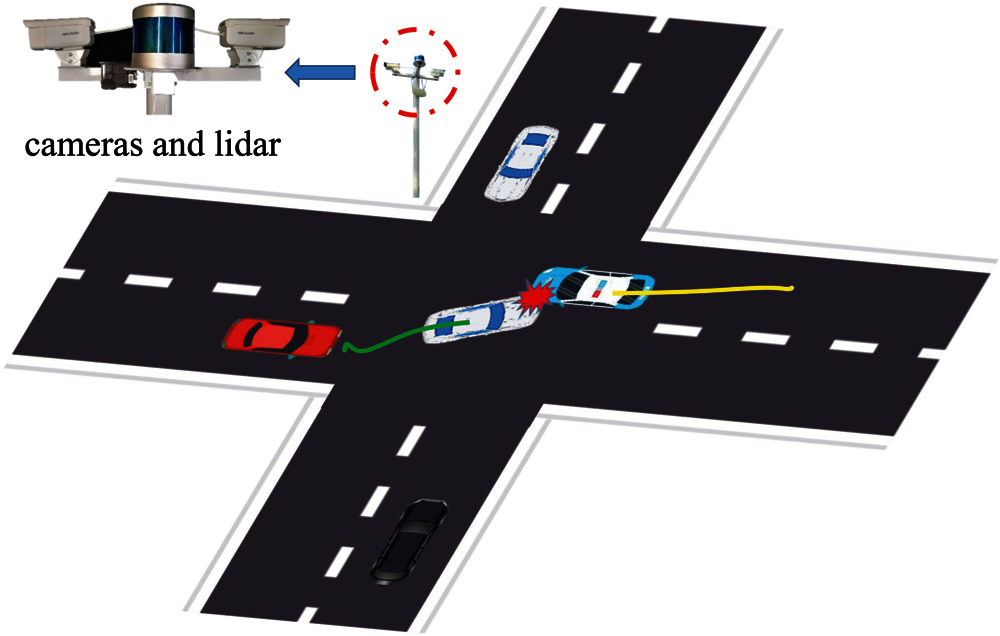 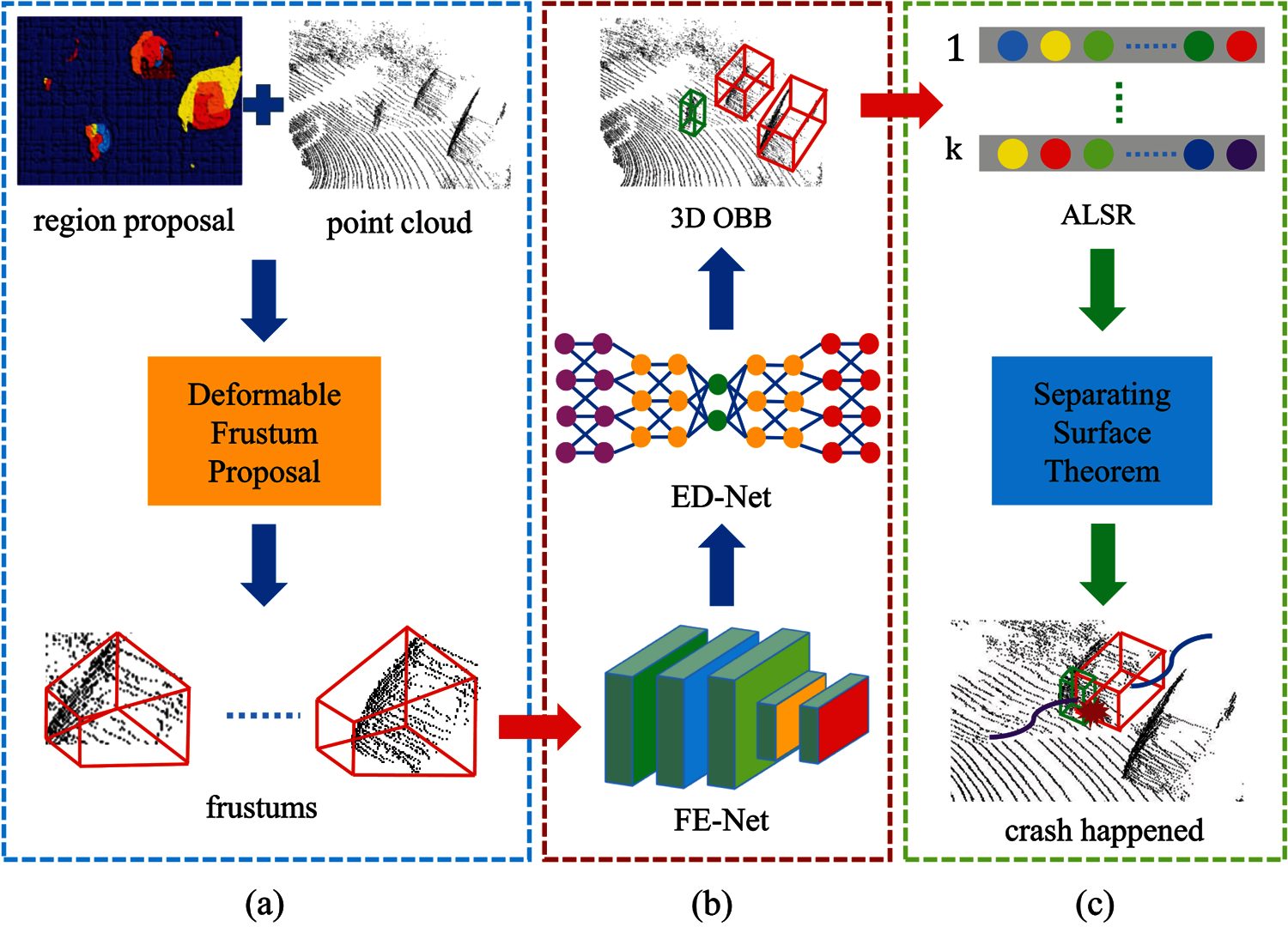 Figure 2: The pipeline of the proposed method. (a) Deformable frustum proposal based on 2D region proposals in an RGB image and point clouds. (b) 3D OBB regression framework. (c) Collision detection based on ALSR and SST

The contributions of this paper are summarized as follows:

1.    This method proposes a novel 3D object detector based on deformable frustum proposal, which can achieve an end-to-end 3D OBB regression in complex scenarios including occlusion and scale transform.

The rest of this study is organized as follows. Section 2 briefly reviews relevant researches on traffic accident detection, and some methods of 3D object detection based on RGB images and point clouds are summarized. The proposed method is fully presented in Section 3. Extensive experiments on the KITTI benchmark and SHTA dataset are elaborated in Section 4. Section 5 concludes our research of this paper.

As shown in Fig. 2, our system consists of two modules: 3D OBB regression and collision detection. Section 3.1 details some modules of 3D OBB regression framework, such as deformable frustum proposal, FE-Net, and ED-Net. Then, traffic crash is predicted using ALSR and SST in Section 3.2.

By assuming the availability of 2D region proposals in RGB images that are easily obtained from some object detection frameworks, the proposed method generates a sequence of deformable frustums, and then extracts frustum-wisely features via FPS-Net and FE-Net. Subsequently, ED-Net is designed to down-sample and up-sample frustum-wisely features to obtain multi-scale feature maps. Together with a detection header, our method supports an end-to-end prediction of 3D OBB.

To reduce search space and detect occluded objects, this method takes advantage of 2D region proposals in RGB images that are generated by region proposal network. Different from [8], our method assumes that the joint calibration of camera coordinate system and LIDAR coordinate system has already been performed, which means the optical axis of the camera is perpendicular to each 2D region proposal. As illustrated in Fig. 3, a specific frustum is generated for each 2D region proposal by sliding along the optical axis between the image plane and the far plane. Owing to N (N = 3) aspect ratios of 2D region proposals generated by a 2D object detector, the width and height of frustums are changeable. In addition, our method uses a parameter σ (σ = 0.9, 1.0, 1.2) to control the depth of frustums, as the inaccurate depth between the image plane and the far plane is defined by the range of the depth sensor. Thus, each object owns deformable frustums .

Figure 3: Illustration of how deformable frustums are generated for 2D region proposals in an RGB image

To extract frustum-wisely features, this method uses FPS-Net to obtain points from deformable frustums according to the principle of the most distant point. Then, our method applies FE-Net that includes convolution layers and max-pooling layers, followed by IR-Block, as shown in Fig. 4. Inspired by [28], IR-Block combines the Inception module with residual connection based on 1 × 1 convolution and 3 × 3 same convolution. Different from [27], the proposed method uses relative coordinates as the input of FE-Net. Each Δ Pi is obtained by subtracting each Pi with the centroid C of the frustum, Δ Pi = Pi − C for i = 1,…, n.

Figure 4: The architecture of FE-Net

To solve scale transform, the proposed method concatenates frustum-wisely feature vectors to form a feature map of the size L × d × 1 (d = 256, L is the number of objects), which is the input of subsequent ED-Net. As shown in Fig. 5, ED-Net is composed of two modules: (a) the encoder that gradually contracts the spatial dimension of feature maps with 1 × 1 convolution and 1 × 2 max pooling, and (b) the decoder that gradually expands the spatial dimension and object details based on 1 × 2 deconvolution. The size of the same convolution kernel is 3 × 3. Deconv layer upsamples the feature map to the same resolution as that in the encoder module, which is concatenated together along the feature dimension. On top of ED-Net is the detection header, which is used to classify object categories and generate 3D OBB. Given K categories, the classification branch outputs a feature map of the size . Our method uses focal loss [29] as the loss function, which helps solve the problem of data imbalance between different classes. Different from [8], this method parameterizes a 3D OBB by its center , shape , and yaw angle θ. The regression loss is smooth L1 loss and corner loss [8], which are used to regularize all parameters of a 3D OBB.

Figure 5: The architecture of ED-Net

To accurately infer traffic accidents, our method splits 3D OBB via ALSR. ALSR is a space partitioning method based on spectral clustering. First, ALSR uses an alternative optimization model to calculate the coefficient matrix. Then, the affine matrix is obtained based on the coefficient matrix. Finally, this method uses the standard segmentation method to split the affine matrix to obtain k subspaces.

The data matrix D of 3D OBB is reconstructed in directions of column and row, respectively. Thus, ALSR is established according to Eq. (1). C denotes column coefficient matrix and R means row coefficient matrix. λ is a regularization parameter, which is used to balance the impact of each other.

To speed up the convergence, this algorithm adopts the gradient descent method, as shown in Eqs. (4) and (5). 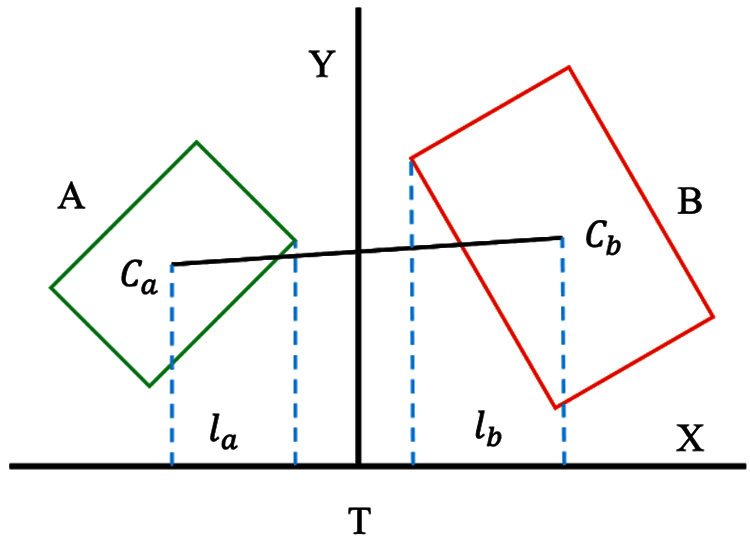 A large number of experiments are conducted on NVIDIA GTX 1080 GPU in this study. Section 4.1 depicts the KITTI detection benchmark and SHTA dataset. Section 4.2 evaluates the performance of 3D OBB regression, and then compares it with the state-of-the-art methods. The performance of collision detection is demonstrated in Section 4.3.

The KITTI detection benchmark contains 7,481 training and 7,518 testing RGB images and corresponding LIDAR point clouds, including three categories: Car, Pedestrian, and Cyclist. The proposed method trains our 3D object detector for Car and Pedestrian by splitting original data into 3,712 and 3,769 samples. The 3D IOU evaluation metrics are 0.7 and 0.5, respectively.

To achieve detection of traffic accidents, our SHTA dataset was collected with surveillance cameras and LIDAR in Shanghai urban roads, including 5,672 crash records in different conditions such as occlusion and truncation. This method retrains our 3D object detector by fine-tuning the pre-trained network to generate 3D OBB. Then, traffic accident is predicted via ALSR and SST. As shown in Table 1, crash severity is classified into four levels, including no-injury, no-capacitating injury, incapacitating injury, and fatal injury.

Our 3D object detector are trained on KITTI benchmark and SHTA dataset, respectively. 3D object detector introduces 2D region proposals of Faster-RCNN [6] with ResNet-101 [30] for the KITTI detection benchmark. Using these 2D region proposals, this method samples 2,048 points from point clouds for each frustum based on FPS-Net. This method regards predicted boxes whose centers fall in the ground-truth boxes as positive samples and counts the others as negative samples. During both training and testing, data augmentation is used with random flipping (with a probability of 0.5) and random rotation (from −π to π) to deal with angle transform. Before training, some hyperparameters need to be set. The batch size is set as 32 to generate 32 random samples of each frustum. The initial learning rate is 0.001 and decays one-tenth of the original every 30th epoch of the total 60 epochs. This method uses Adam optimizer with weight decay of 1e-05.

Table 2 illustrates the performance of our 3D OBB regression framework on the KITTI detection benchmark. This method outperforms most approaches in average precision (AP) and runtime. Especially, it improves upon the previously best model PV-RCNN [31] by 4.13 mAP, showing effectiveness of deformable frustum proposals. It gets better results on nearly all categories and has the biggest improvements on object categories that are often occluded (+1.37 AP for pedestrians and + 1.10 AP for cars). Besides, our method achieves great advantages in terms of speed (−0.03 s for runtime) thanks to the deformable frustum proposal decreasing the computing cost of point clouds. Fig. 7 shows the performance comparison of five methods (i.e., F-PointNet [8], F-ConvNet [27], PointRCNN [22], PV-RCNN [31]) including ours, under two different challenging conditions including scale transform and partial occlusion. Our method exceeds other methods under these conditions due to ED-Net providing multi-scale feature maps, texture information, and depth information. As a result, our 3D object detector is accurate and robust for traffic accident detection. 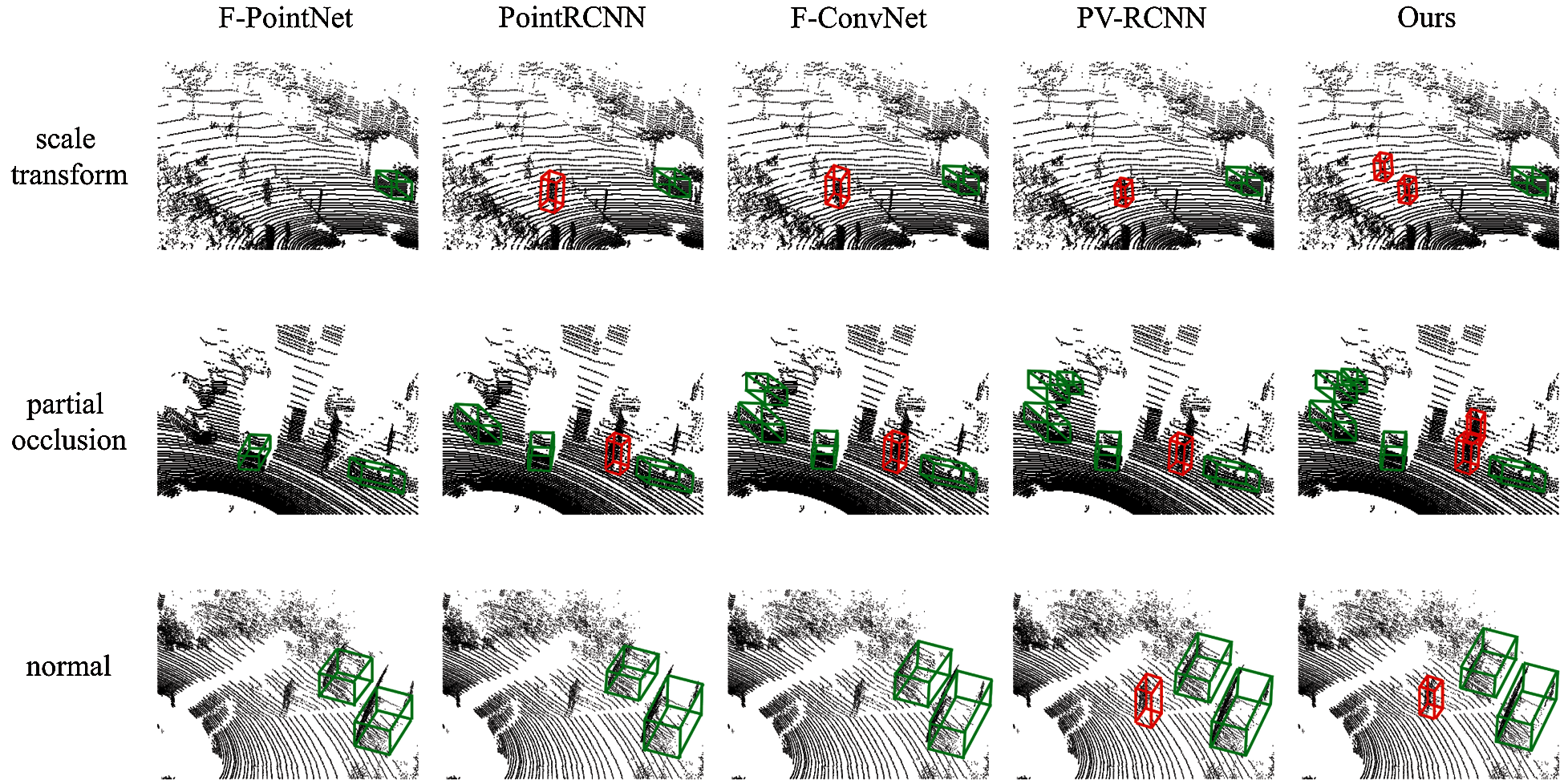 The proposed method predicts traffic accidents with ALSR and SST. To assess the performance of collision detection, this method introduces three metrics including precision (P), recall (R) and frames per second (FPS) as shown in Eqs. (6) and (7).

Table 5 shows the comparison result of seven different collision detection approaches including Ijjina method [3], Yun method [10], Singh method [11], Chong method [12], Liu method [13] and Yao method [14]. Our method exceeds other approaches in terms of accuracy and runtime. Especially, it improves upon the previously best model by 3.24 P and 2.15 R thanks to adaptive space segmentation. In addition, it has the biggest improvements on the speed (+8 FPS), showing influence of separating surface theory.

4.3.2 Influence of the Number of Subspaces

ALSR divides the 3D OBB into k subspaces. Then, SST makes 15 × k judgments to infer traffic accidents. Thus, the number of subspaces plays an important role in collision detection. Table 6 illustrates the influence of k on the performance of collision detection. As k increases, the prediction accuracy (ACC) of our method firstly increases and then decreases. Experiments show ACC is better when k is 256.

In this paper, a traffic accident detection system, based on 3D OBB regression and adaptive space segmentation, is proposed to effectively predict traffic accidents. A novel 3D object detector is adapted to generate 3D OBB for further traffic accident detection based on deformable frustum proposal, FE-Net, and ED-Net. Besides, this method proposes ALSR and SST for collision detection. Extensive experiments on SHTA dataset demonstrate this method outperforms other SOTA approaches in terms of accuracy and running speed. In the future, our SHTA dataset will be expanded and contain more different traffic scenes.

Acknowledgement: The authors wish to express their appreciation to the reviewers for their helpful suggestions which greatly improved the presentation of this paper.