Abstract: During mine filling, the caking in the pipeline and the waste rock in the filling slurry may cause serious safety accidents such as pipe blocking or explosion. Therefore, the visualization of the inner mine filling of the solid–liquid two-phase flow in the pipeline is important. This paper proposes a method based on capacitance tomography for the visualization of the solid–liquid distribution on the section of a filling pipe. A feedback network is used for electrical capacitance tomography reconstruction. This reconstruction method uses radial basis function neural network fitting to determine the relationship between the capacitance vector and medium distribution error. In the reconstruction process, the error in the linear back projection is removed; thus, the reconstruction problem becomes an accurate linear problem. The simulation results show that the reconstruction accuracy of this algorithm is better than that of many traditional algorithms; furthermore, the reconstructed image artifacts are fewer, and the phase distribution boundary is clearer. This method can help determine the location and size of the caking and waste rock in the cross section of the pipeline more accurately and has great application prospects in the visualization of filling pipelines in mines.

In the process of mining, cemented tailing filling technology is often adopted to reduce environmental pollution and solve problems such as surface subsidence [1]. The slurry of the mine filling body is a solid–liquid two-phase flow that contains tailings, waste rock, cementing material, water, and other components, which flows in a complex manner in the filling pipeline [2]. During transportation, owing to pressure change, pipe distribution position, and other factors, problems such as internal deposition, scaling, and blockage of pipelines can easily occur, which can affect the safety of the filling pipeline and the mine filling process. To avoid the blockage of the filling pipeline and reduce the detection cost, the visual detection of the pipeline has attracted increasing attention [3]. Liu et al. [4] proposed the use of electrical resistance tomography technology to detect the filling pipeline, but there was no considerable imaging effect. Electrical capacitance tomography (ECT) technology can help visualize the phase distribution in a pipeline cross-section and obtain reliable and intuitive results for pipeline detection.

In this study, an ECT reconstruction feedback network based on an RBFNN was established, and the center selection of the RBFNN was realized using the orthogonal least squares (OLS) algorithm. There are major errors in the calculation results of linear reconstruction algorithms. Using a feedback reconstruction network, the errors were removed, and accurate imaging results were obtained.

In Section 2, the system model and mathematical principle of capacitance tomography are introduced. Section 3 describes the proposed ECT feedback network reconstruction method, the RBFNN, and the training dataset. In Section 4, the corresponding experiments and results are presented. Section 5 presents a summary and prospects for future research.

In this study, an ECT system was investigated and verified through simulation experiments. The ECT system is illustrated in Fig. 1. This system consists of a 12-electrode ECT sensor, a capacitance measurement circuit, and an upper computer (PC).

The 12-electrode ECT system was studied, and there were 66 independent measured capacitance values. Fig. 1 shows the ECT sensor. In the two-dimensional ECT model shown in Fig. 2, 12 electrodes are distributed on the outside of the pipe and close to the pipe wall; furthermore, a shield is used to reduce interference from the outside of the system, and there are two different media in the pipe under test. 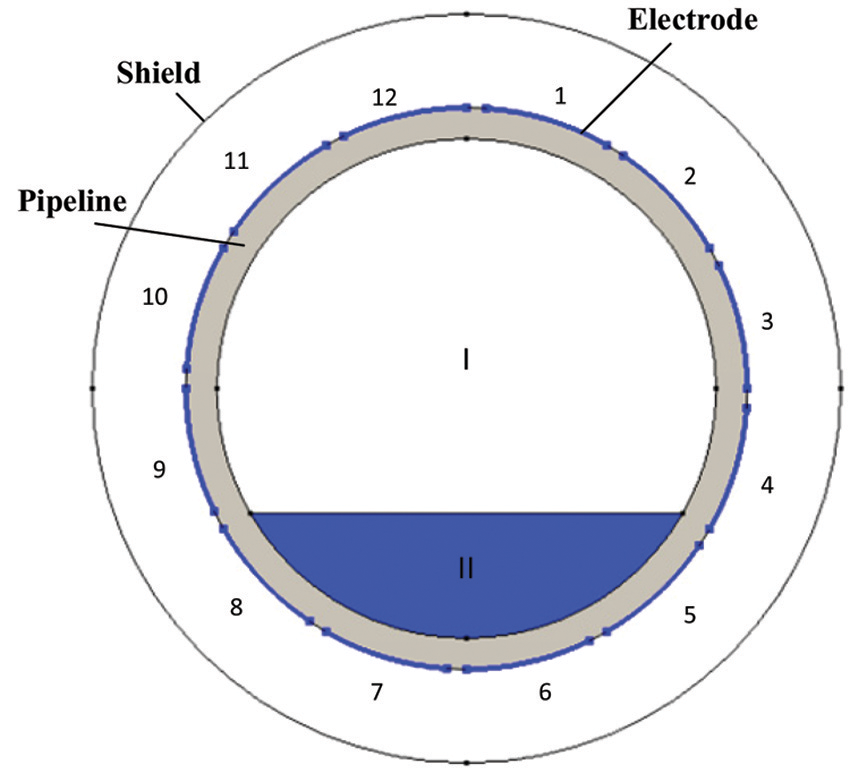 where represents the normalized capacitance vector, S is the sensitivity matrix, and g is the normalized dielectric constant matrix. S represents the sensitivity of the capacitance vector to the permittivity distribution. The changing trend of the dielectric constant vector can be reflected by the pixel distribution; that is, g can also be represented as a pixel vector.

Because the number of pixels required for imaging is much larger than the number of measured capacitance values, the dimension of g is much larger than that of C. The number of calculations required for sensitivity S will increase with an increase in the precision of the sensitive field partition. Because the condition number of S is large, the disturbance with a small measured capacitance value will cause a large change in the dielectric constant [20]. Therefore, the solution to the inverse problem based on Eq. (2) is inconclusive.

To address these problems, this paper proposes the use of an RBFNN to establish the nonlinear relationship between capacitance and dielectric constant values and to select the center of the RBFNN using the OLS method.

In this study, the LBP reconstruction algorithm was used to solve the ECT inverse problem, and an RBFNN was used to realize the nonlinear mapping between the approximation measurement capacitance and LBP reconstruction error. An OLS was used to optimize the RBFNN. Thus, the ECT feedback network was implemented. This section introduces the overall framework of the ECT feedback network based on the RBFNN, the principle of OLS-RBF, and the generation of the training set.

In the LBP algorithm, the solution of the dielectric constant value is expressed as follows:

where represents the transpose of the sensitivity matrix. Because the LBP algorithm is a linear reconstruction algorithm and there is a nonlinear relationship between the measured capacitance and dielectric constant distribution in the ECT reconstruction problem, the reconstructed image is not accurate, and severe distortion and artifacts may occur. The image error (IE) of the LBP reconstruction is expressed as follows:

Hypothesis represents the nonlinear relationship between the measured capacitance and the reconstruction error. Therefore, we have

which can be obtained through Eq. (4) as follows:

An RBFNN has a feedforward structure with a single hidden layer, and the application of its kernel function can map low-dimensional linearly indivisible data to high-dimensional space, making it linearly separable in a high-dimensional space [21]. Owing to its local approximation ability and nonlinear characteristics, it can approximate the continuous function of arbitrary accuracy. Owing to the inaccuracy of the inverse problem of ECT and the nonlinearity of the distribution of capacitance as well as the media constant, the reconstruction of the LBP algorithm will result in major errors. The proposed reconstruction algorithm uses the trained RBFNN to predict such errors and eliminate them in the reconstruction process in order to realize an accurate calculation of the media distribution. The structure of the RBFNN is shown in Fig. 4. The input of the network is the capacitance vector, and the output is the predicted IE. 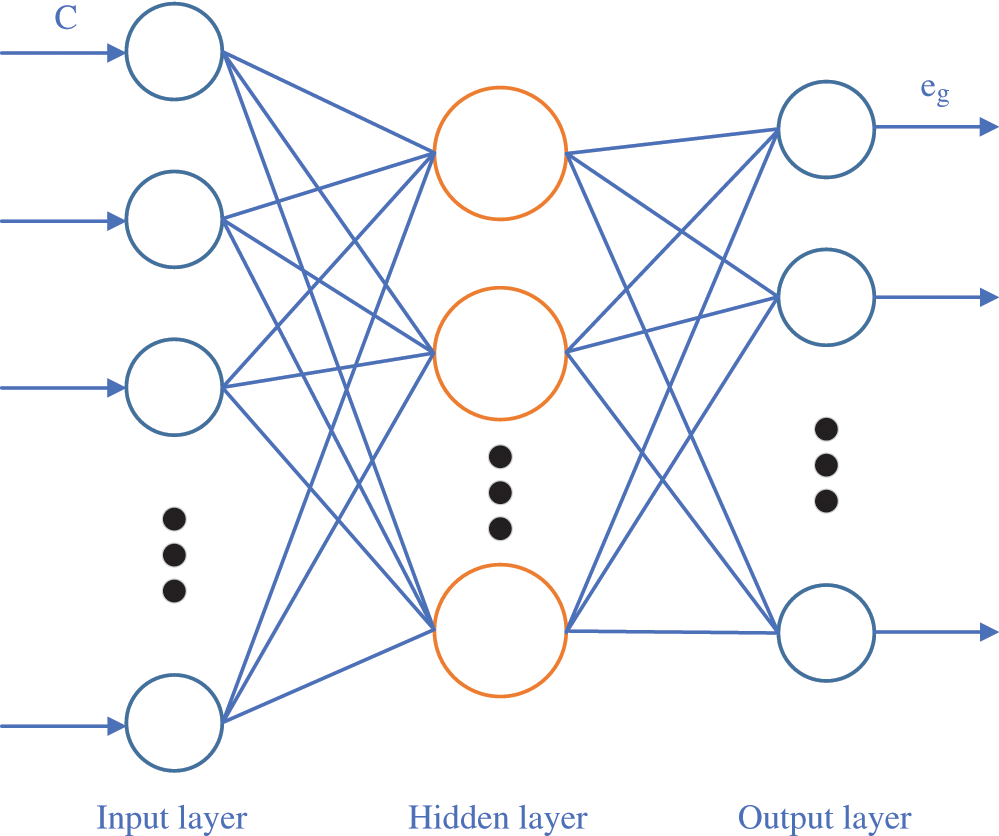 RBFs are non-negative real-valued functions whose values depend on the input distance from the central point and are radially symmetric. The Gaussian function is expressed as follows:

where x is the input, is the center point of the ith node of the hidden layer, is the width variance of the ith node, and is the Euclidean norm. Let y be the output of the network-output layer node,

is the weight of the ith hidden layer connected to the output node, which is determined by the linear OLS method through input x and the corresponding expected output. The hidden layer is composed of M nodes. The input data are inputted to the network, and the response of the hidden layer is calculated; subsequently, the output of the network is calculated using the initial weight. In the training process, the weight is constantly adjusted to minimize the error between the network output and the expected output. The RBFNN is also called the local response function [22] because it only trains some weights that have a significant influence on the output.

When using an RBFNN, the most important factor is selecting the center point. In this study, the OLS algorithm was used to select the center and construct the RBFNN. RBF network can be viewed as the following regression model:

OLS transforms the P set into orthogonal basis vectors, and then obtains the effect of each basis vector on the output,

where, A is an upper triangular matrix in M dimension with diagonal 1, W is an N × M matrix, and

where H is a diagonal matrix whose diagonal element is ,

is an orthonormal basis vector. And Eq. (9) can be transformed into

where, g in OLS algorithm is represented as

in Eq. (9) can be solved by the following formula:

The gram-Schmidt method can be used to obtain the value of the least squares estimate .

COMSOL Multiphysics finite element software was used to establish four distributions of ECT models: single-core, two-core, three-core, and stratified. When modeling different samples in COMSOL, different parameters were used to describe their characteristics. Figs. 5a–5c show the core distribution, and the parameters describing the sample are the center position and radius. Fig. 5d shows the stratified distribution, and its parameters are the height of the stratified distribution interface and the inclination angle between the normal line of the interface and the horizontal line. Different samples can be created by generating random parameters.

Each distribution sample was simulated by COMSOL to obtain 5,000 datasets, with a total of 20,000 data sets. Each dataset consists of a measured capacitance vector C and a dielectric constant value vector g. C and g are the input and expected output of the network, respectively. To accelerate the convergence speed of the network training, before using the data set to train the network, each group of measured capacitance values needs to be normalized. The normalization formula for C is as follows:

To verify the effectiveness of the proposed reconstruction method, two criteria of correlation coefficient (CC) and image error (IE) are used to quantitatively evaluate the reconstruction accuracy: 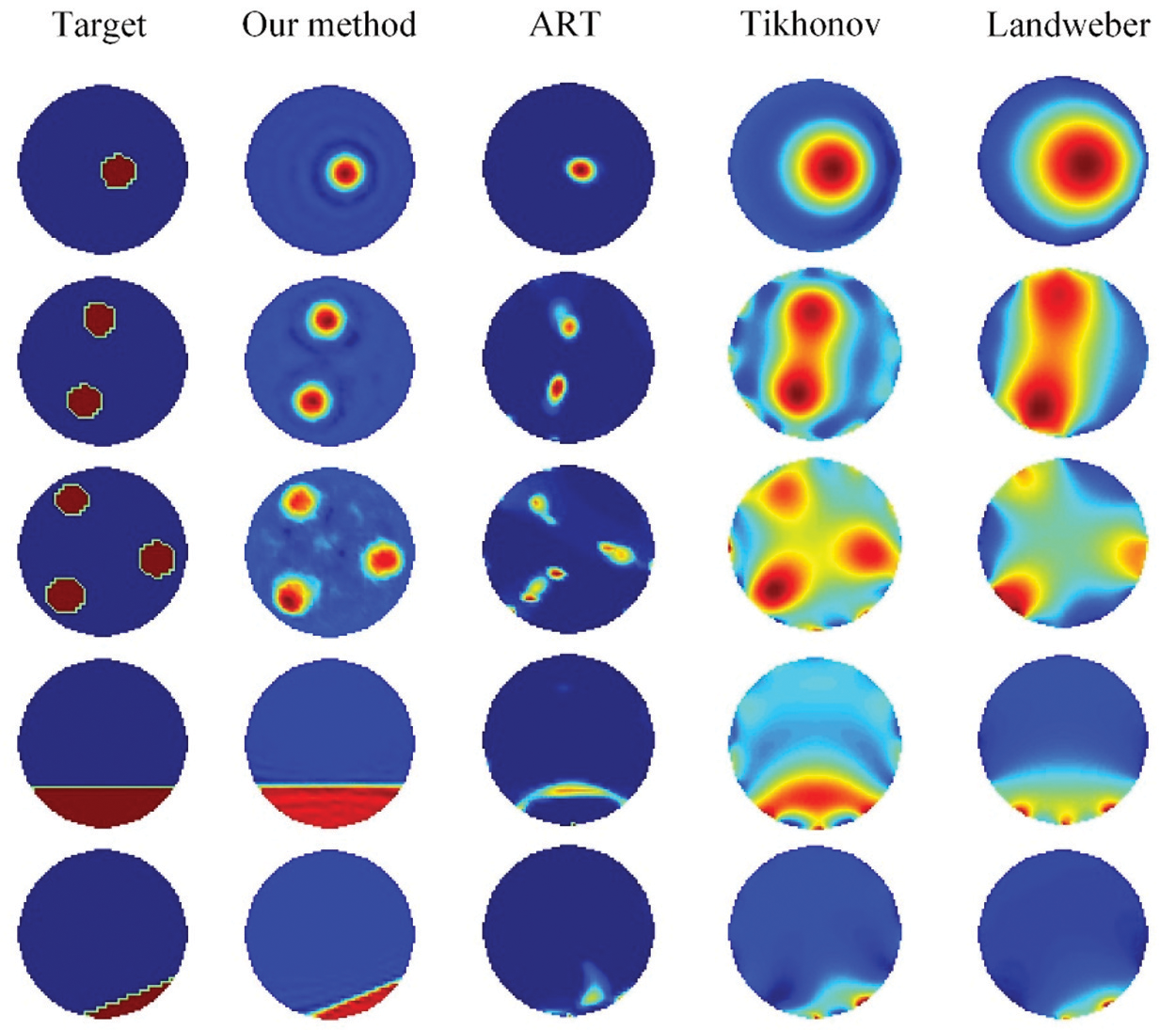 To further study the anti-noise performance of the algorithm, the capacitance data are added to the noise and then inputted to the feedback reconstruction network for calculation. The signal-to-noise ratio (SNR) is expressed as follows: 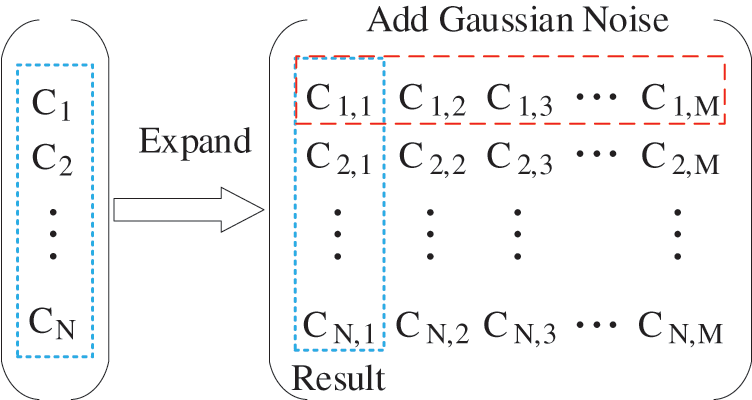 Acknowledgement: I would like to acknowledge Professor, Ningbo Jing, for inspiring my interest in the development of innovative technologies.

Funding Statement: This research was supported by the National Natural Science Foundation of China (No. 51704229), Outstanding Youth Science Fund of Xi'an University of Science and Technology (No. 2018YQ2-01).

Conflicts of Interest: We declare that we have no financial and personal relationships with other people or organizations that can inappropriately influence our work, there is no professional or other personal interest of any nature or kind in any product, service and/or company that could be construed as influencing the position presented in, or the review of, the manuscript entitled, “Visualization Detection of Solid–Liquid Two-phase Flow in Filling Pipeline by Electrical Capacitance Tomography Technology”.