Cell extrusion in development and cancer, what MARCKS the difference for epithelial integrity?

Abstract: Cell extrusion is an active mechanism to eliminate non-viable or supernumerary cells in healthy epithelia. It also plays a role in carcinogenesis, both in tumor growth (apical extrusion) and metastasis (basal extrusion). Embryonic tissues like the neuroepithelium, on the other hand, present rates of proliferation comparable to that of carcinomas, without the occurrence of cell extrusion. However, the downregulation or phosphorylation of actin-modulating proteins like MARCKS, causes extensive neuroepithelial apical cell extrusion. As changes in MARCKS proteins phosphorylation and expression have also been correlated to carcinogenesis, we propose here an integrated model for their functions in epithelial integrity.

The function of epithelia as barriers is achieved by the tight mechanical coupling of their participating cells. This poses a major challenge: tissue integrity must be preserved despite the constant cell turnover caused by proliferation and cell death, or the eventual occurrence of aberrant cell behavior, such as in cancerous transformation (Villars and Levayer, 2020; Eisenhoffer et al., 2012). One active mechanism for maintaining epithelial density and integrity is cell extrusion, a set of processes involving biochemical and mechanical signaling concerted to achieve the expulsion of a cell from the epithelial layer, either through its apical or basal side (Nanavati et al., 2020; Eisenhoffer and Rosenblatt, 2013). In this section we will introduce the mechanisms seen in physiological conditions, and in the next, those in pathological or experimental situations.

Conversely, “live apical cell extrusion” appears as the main counterbalancing mechanism to maintain constant cell densities against epithelial proliferation, and it occurs regularly in many homeostatic epithelia, like the tips of intestinal microvilli, where it was first identified (Madara, 1990). In this type of extrusion, “live” means that the cell will remain alive and playing an active part in the process, to eventually die by anoikis after the extrusion has been completed (Slattum and Rosenblatt, 2014). It requires stretch-activated ion channels (Piezo), S1P and the Rho-myosin pathway, and also produces regular topological changes in the organization of the epithelium, based on the collective action of surrounding cells (Nanavati et al., 2020; Eisenhoffer et al., 2012).

Basal extrusion is not a common phenomenon in physiological conditions, except during embryogenesis. For example, in vertebrates, neural crest cells acquire the ability to traverse the basal lamina and migrate away from the ectoderm during neurulation, through a process of epithelial-mesenchymal transition (EMT), modulated by an increase in cell density and stiffness in the surrounding tissues (Nanavati et al., 2020; Barriga et al., 2018; Acloque et al., 2009). Epithelial-mesenchymal transition is now considered part of a bidirectional process, highly involved in both development and cancer, known as epithelial-mesenchymal plasticity (EMP; Yang et al., 2020).

Responsible for nearly 90% of all cancer cases worldwide (http://www.iarc.fr), carcinomas (malignant cancers originated in epithelia) present an extreme case of proliferative activity. Cell extrusion appears as a pivotal cellular process, both in their control and pathogenesis. For example, a proposed cell competition mechanism termed Epithelial Defense Against Cancer (EDAC; Tanimura and Fujita, 2020), implies the live apical extrusion, followed by anoikis, of transformed cells. This mechanism has been extensively studied in mammalian epithelial (MDCK) cultures and zebrafish embryo epidermis, by experimentally transforming a subset of cells through the mosaic expression of oncogenic proteins, like H-RasV12 or v-Src. The extrusion mechanism involves the activity of the complexes paxillin/plectin/EPLIN and myosin-II/spectrin in these oncogenic-transformed cells (Kasai et al., 2018; Takagi et al., 2018) and polarized changes in tensile forces involving RhoA, filamin and vimentin in the surrounding cells (Kajita et al., 2014).

Excessive or maintained tension in the epithelium, however, can prevent apical detachment of the extruded cells, leading to the formation of multilayered cell accumulations. This phenomenon has been observed when depleting caveolae in non-transformed cells surrounding transformed ones, in a process involving the membrane phospholipid phosphatidylinositol(4,5)bisphosphate (PIP2) and the formin FML2 (Teo et al., 2020). Transformed cells resistant to anoikis can thus generate protrusive tumors, such as the polyps seen in the premalignant stages of colorectal adenocarcinoma. Furthermore, if cells from a growing tumor undergo EMT and basal extrusion, they would eventually cause metastasis (Ortiz et al., 2021; Slattum and Rosenblatt, 2014). Adenomatous Polyposis Coli (APC) was indicated as a switch in the decision between apical and basal extrusion. Normally, APC acts by favoring a basal accumulation of contractile F-actin, leading to apical extrusion, but either gene disruption or the expression of an oncogenic mutant APC, causes cells to extrude basally (Marshall et al., 2011). Basal cell extrusion was also promoted upon the expression of a different Ras protein, the more commonly found in cancers K-RasV12 (Slattum et al., 2014), as well as after down-regulation of E-cadherin in H-RasV12-expressing cells (Hogan et al., 2009). An interesting recent report linked autophagy, which has been associated with bad prognosis in carcinomas, to the downregulation of E-cadherin in breast cancer cells (Damiano et al., 2020).

Cell Proliferation and Morphogenesis vs. Cell Extrusion in Development

In embryonic development, epithelia must maintain their integrity while simultaneously enduring high proliferation rates and morphogenetic forces. An extreme case is represented by the neuroepithelium, from which the millions of neurons and glial cells in the central nervous system originate. In this naturally-overcrowded epithelium, cells accommodate by means of a pseudostratified organization maintained by interkinetic nuclear migration, a cell-cycle synchronic, cytoskeleton-driven movement of nuclei between the apical and basal poles of cells (Strzyz et al., 2016; Sauer, 1935). In addition, neuroepithelial cells have to confront the forces generated by the morphogenetic movements of neurulation, which include cell shape changes (elongation and apical constriction) and convergent extension cell rearrangements (Nikolopoulou et al., 2017; Wallingford, 2012). Despite all this, apical cell extrusion is not normally seen in the neuroepithelium, and the reason might again lie in tissue tension generated by the cytoskeleton.

The flexion of the neural folds has been shown to partly depend on the modulation of two properties of the neuroepithelium: cell density, associated to cell proliferation, and tissue stiffness, associated to actomyosin-based cell contractility (Zhang et al., 2019; McShane et al., 2015). For example, an experimental upregulation of the Hippo-YAP/TAZ pathway, which modulates cell proliferation in response to mechanical stress (Aragona et al., 2013), caused hyperproliferation in the chick neuroepithelium, eventually leading to the generation of apical cell protrusions (Cao et al., 2008). Conversely, YAP (Yes-Associated Protein) deletion in neural crest prospective cells, bordering the neural and non-neural ectoderm, resulted in neurulation defects (Wang et al., 2015). On the other hand, the apical constriction in primary neurulation relies on the association of actomyosin and Rho GTPases with the cadherin-based adhesion complexes of neuroepithelial cells (Escuin et al., 2015; Kinoshita et al., 2008). Severe neurulation defects, accompanied by massive apical cell extrusion, were evident upon the perturbation of Rho (Kinoshita et al., 2008) and another protein that is normally localized around the apical actomyosin ring: the Myristoylated Alanine Rich C-Kinase Substrate (MARCKS; Aparicio et al., 2018).

Normally, MARCKS accumulates apically in chick neural plate cells (Zolessi and Arruti, 2001) and the functional inactivation of both genes caused severe defects in neurulation and neural tube morphogenesis in mice (Chen et al., 1996; Stumpo et al., 1995) and zebrafish (Prieto and Zolessi, 2017). In the chick, either MARCKS knockdown or its protein kinase C (PKC)-induced phosphorylation (leading to a loss in membrane attachment and apical localization), caused a failure in neural tube closure, with the neural plate remaining flat and wider than normal (Aparicio et al., 2018). The most remarkable effect at the cellular level was a general reduction in apicobasal polarity, accompanied by massive apical cell extrusion. Supra-apically localized cells did not detach immediately and remained viable for some time, even dividing in that ectopic position. These observations indicated a live apical cell extrusion mechanism, as described above for oncogenic cells (Fig. 1). 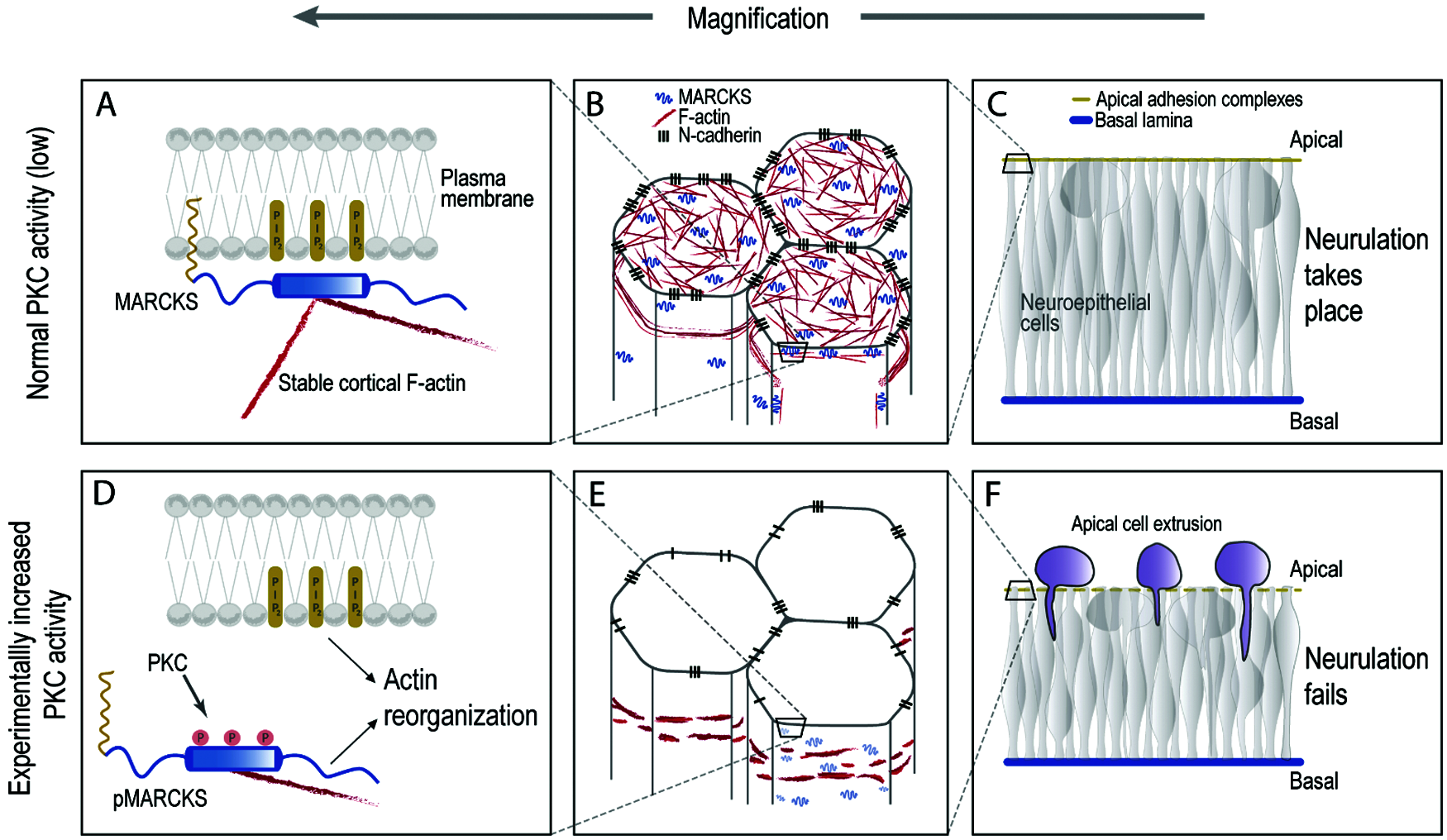 Figure 1: MARCKS hyper-phosphorylation at the ED causes apical extrusion in the neuroepithelium. Partly speculative model to explain the role of MARCKS in neurulation. In the normal chick neural plate cells (A–C), MARCKS is largely present in a non-phosphorylated form, hence attached to PIP2 at the plasma membrane, while simultaneously binding two actin filaments (A and B). This configuration would promote apico-basal cell polarity and cell adhesion, strengthening the epithelial phenotype of the neural plate cells, which is necessary for neurulation (C). If MARCKS is extensively phosphorylated upon experimental PKC activation (or if it is down-regulated, not shown in the figure), it detaches from the plasma membrane, releasing PIP2 and one actin filament, with an effect on cortical F-actin stability (D–E). This would cause a reduction in apico-basal cell polarity and adhesion, accompanied by apical cell extrusion and a failure to close the neural tube (F) (Aparicio et al., 2018).

On the other hand, PKC activity is usually deregulated in cancer (Newton, 2018), and different studies have indicated that MARCKS expression is downregulated in transformed and cancerous cells (Bickeböller et al., 2015; Rohrbach et al., 2015; Jarboe et al., 2012; Michel et al., 2009; Brooks et al., 1996; Joseph et al., 1992; Wolfman et al., 1987). In in vitro-transformed cells, this downregulation was at the transcriptional level, and was related to either v-Src tyrosine kinase activity or to an initially increased PKC activity, while deleterious mutations in the MARCKS-encoding gene were detected in human colorectal cancer cells displaying microsatellite instability (Michel et al., 2009). Some studies, however, have indicated a correlation between an increase in MARCKS expression and bad prognosis in different cancers (Chen et al., 2017; Browne et al., 2013; Micallef et al., 2009). This apparently paradoxical observation might have a very simple explanation on the observation of a higher-than-normal MARCKS ED phosphorylation in several highly-expressing cancers (Chen et al., 2017; Chen and Rotenberg, 2010). In lung cancer cells, the overexpression of a non-phosphorylatable MARCKS or the competitive inhibition of endogenous MARCKS phosphorylation with an ED-mimetic peptide, reduced EMT and cell invasiveness, and increased radiation sensitivity (Rohrbach et al., 2017, 2015; Chen et al., 2014). Altogether, these observations have led to the idea that MARCKS is a bonafide tumor suppressor, whose membrane-binding and actin crosslinking activities are necessary to prevent cells from acquiring a malignant phenotype, keeping at least three processes at bay: cell proliferation, cell invasiveness and resistance to apoptosis.

We can consider the epithelial phenotype as one endpoint of a continuous line that leads to the mesenchymal phenotype in the other, with several intermediate stages along the line, dynamically connected by EMP. We propose that MARCKS-family proteins act as dynamic switches continuously influencing the cell’s position along this line (Fig. 2). A well-regulated proportion of unphosphorylated MARCKS, enough to simultaneously bind most of the free PIP2 while anchoring crosslinked actin filaments to the membrane, will make cells firmly attach to each other and acquire an epithelial phenotype, getting closer to an endpoint. Any physiological, pathological or experimental changes in this balance (lower or too high MARCKS expression; higher PKC-type phosphorylation), would drive cells towards the mesenchymal endpoint of the EMP line. One of the resulting events in this epithelial-mesenchymal transition would be cell extrusion, either apical or basal, with different outcomes regarding the fate of the extruded cells depending on both cell-intrinsic and cell-extrinsic factors.

Figure 2: A model for the role of cell extrusion and MARCKS protein in carcinogenesis. In a healthy epithelium, transformed cells tend to be expelled by apical cell extrusion followed by cell death (anoikis). Some transformed cells may however gain the ability to stay attached to the apical side of the epithelium after extrusion. If these cells are at the same time resistant to cell death and proliferative (both hallmarks of cancer cells), they will generate a primary tumor, which is initially “benign”. Eventually, some cells in this tumor may gain the ability to basally extrude, escaping from the epithelium and invading other tissues and organs, where they form secondary tumors (metastasis). This implies a process known as “epithelial-mesenchymal plasticity”, which is associated with the degree of cell adhesion and apico-basal polarity. The balance between MARCKS expression and its phosphorylation at the ED would modulate this process.

Conflicts of Interest: The authors declare that they have no conflicts of interest to report regarding the present work.