Abstract: Periodontal disease is the leading cause of tooth loss, which is also a high-risk factor for other diseases including oral cancer and cardiovascular disease. Periodontitis is one of the most common type of periodontal diseases. Interleukin-1β (IL-1β) plays a key role in the pathogenesis of periodontitis. However, the mechanism how IL-1β is produced during periodontitis is still unclear. In the present study, we found that human β-defensin 2 (hBD2) enhances IL-1β production through an LPS-primed human acute monocytic leukemia (THP-1) macrophage model. Inhibition of P2X purinoceptor 7 (P2X7) reduced hBD2-enhanced IL-1β production. Incubation of LPS-primed THP-1 macrophages with potassium chloride also suppressed hBD2-enhanced IL-1β production. Silence of inflammasome adaptor Nod-like receptor family pyrin domain containing 3 (NLRP3) led to reduced hBD2-enhanced IL-1β production. Likewise, inhibition of caspase-1 also resulted in the decrease of IL-1β. Moreover, an ethidium bromide uptake test indicated that hBD2-activated caspase-1 mediated pyroptotic pore formation. Subsequent lactate dehydrogenase detection and flow cytometric analysis indicated that hBD2 also induced pyroptosis. In brief, these findings illustrated not only the mechanism of hBD2 in enhancing the inflammatory response, but also provided novel therapeutic targets for periodontitis.

It is well known that two signals are required for IL-1β production. First, exogenous stimuli (e.g., lipopolysaccharide, LPS) induce transcription of pro-IL-1β through the Toll-like receptor (TLR). Second, extracellular stimuli including ATP initiate the assembly of an inflammasome via NOD-like receptors (NLRs, e.g., NLRP3 and AIM2) to activate IL-1β by caspase-1 (Latz, 2010). During this process, ATP-activated purinergic receptor P2X7 is essential for inducing assembly of NLRP3 inflammasome, activation of caspase-1 and mature IL-1β production (Kayagaki et al., 2011; Mariathasan et al., 2006). However, the mechanism how IL-1β is produced in periodontitis is still unclear. Human β-defensin (hBD) expressed by human normal gingival epithelial cells plays a vital role in the innate immune response and protects human from infection (Liu et al., 2014; Yang et al., 1999), which also has antimicrobial effect in gingiva of periodontitis patients (Wang et al., 2015). Our previous work in patients with periodontitis has indicated that the anti-microbial ability of hBD2 is stronger than hBD1 and hBD3 (Wang et al., 2015). Other studies further demonstrated that hBD2 modulates human immunity through inducing monocytes including macrophage productions of chemokines and proinflammatory cytokines including IL-1β (Chaly et al., 2000; Rohrl et al., 2010a). To date, the role of hBD2 on IL-1β production in periodontitis is not known.

In addition, IL-1β could promote caspase-1/Gasdermin D (GSDMD)-induced pyroptosis, which is critical for controlling infection (Bergsbaken et al., 2009; Miao et al., 2010; Wang et al., 2017b). Pyroptosis in macrophage during innate immune response might be a regulatory mechanism to protect human from infection in periodontitis and subsequently maintain the normal number of immune cells to avoid excessive inflammatory responses (Fleetwood et al., 2017). GSDMD, a substrate of both caspase-1 and caspase-11/4/5, leads to non-selected membrane pore formation which can be detected by EtBr or 7-AAD staining (Fink and Cookson, 2006; Zhang et al., 2018). However, whether hBD2 could induce pyroptosis of macrophage through IL-1β is unclear.

Thus, the primary aim of this study is to investigate whether hBD2 enhances IL-1β production and pyroptosis in periodontitis using LPS-primed THP-1 macrophage model. 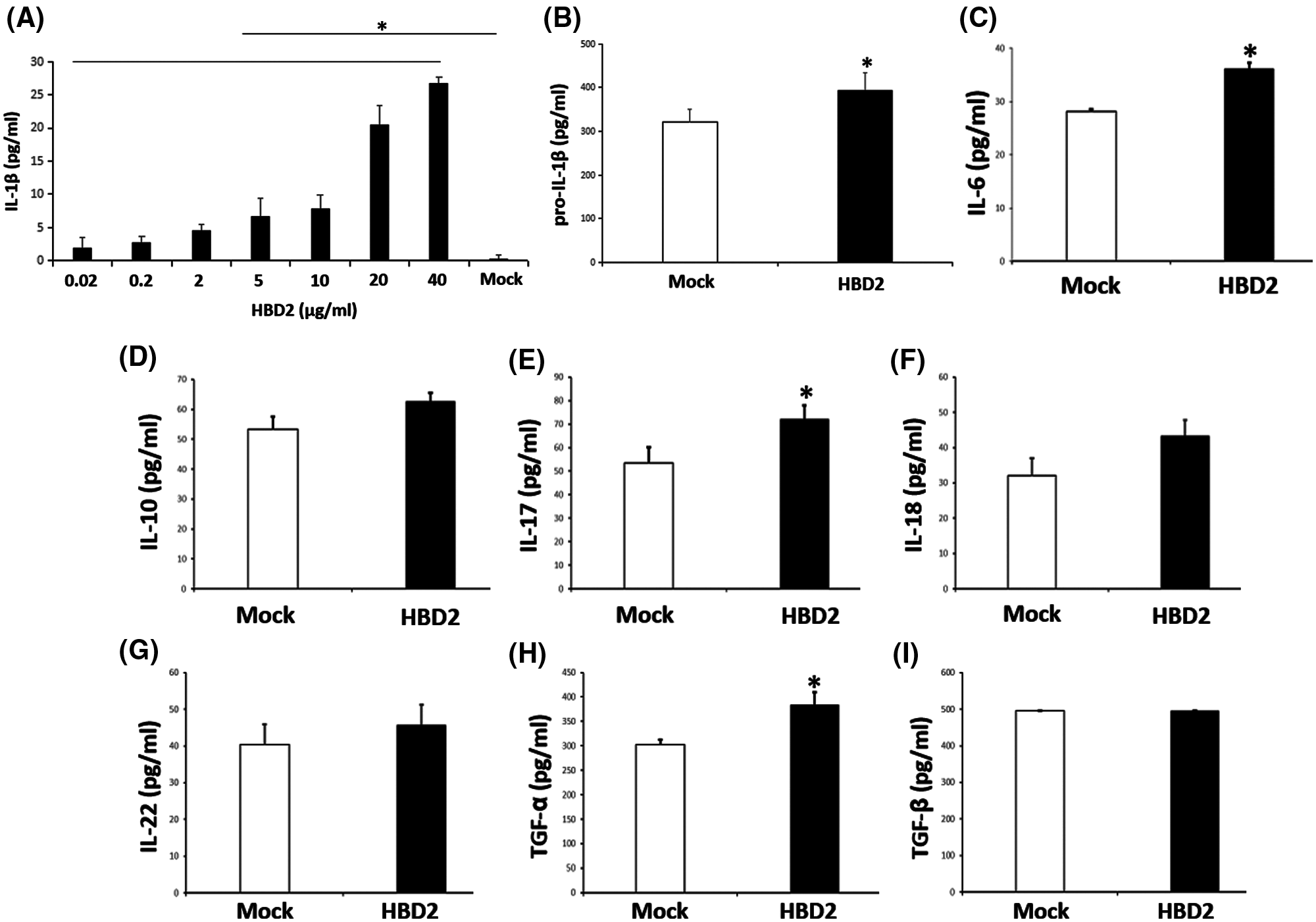 Pore formation was determined by EtBr stain permeability as described previously (Fink and Cookson, 2006). Briefly, THP-1 cells were plated on coverslips in the well of 24-well plate. Subsequently, cells were differentiated by PMA and stimulated using LPS as described above. After discarding the medium, coverslips were covered by 15 mL PBS supplemented with 10 mM SYTO 42 (blue) and 25 mg/mL EtBr (red) for 5 min in dark following the treatment with various compounds (5 mM ATP, 20 μg/mL hBD2, 100 mM YVAD-cmk). Images were acquired for further analysis. Pore formation was investigated by the percentage of EtBr positive-stained cells.

THP-1 cells plated in 24-well plates were differentiated by PMA and stimulated using LPS as described above. After the treatment with various compounds (5 mM ATP, 20 μg/mL hBD2 (according to optimization of concentration in Fig. 1A), or 100 mM YVAD-cmk), the culture medium was collected for the measurement of released LDH according to the manufacturer’s instruction.

All experiments in this study were repeated three times and average values of three experiments were presented as the mean ± SD calculated by STDEV formula in Excel. The significance of all data was estimated by a Tukey’s multiple-comparison test in the ANOVA analysis using the SigmaStat 3.5 software. Importantly, statistical significance was accepted when P < 0.05.

Previous studies have indicated the effect of ATP on the secretion of IL-1β is mediated by P2X7, which can be inhibited by KN-62 and oATP (Elssner et al., 2004; Ferrari et al., 2006). Results indicated that inhibition of P2X7 by oATP and KN-62 suppressed IL-1β production in LPS-primed THP-1 macrophages treated with ATP (Fig. 2A) or hBD2 (Fig. 2B). Above data suggested that hBD2 treatment of LPS-primed THP-1 macrophages leading to increased IL-1β production was mediated by P2X7.

Figure 2: hBD2 treatment of LPS-primed THP-1 cells increases IL-1β production via P2X7.
(A and B) The concentration of released IL-1β in the cell medium measured by ELISA (N = 3 per group). Statistical analysis is based on a one-way ANOVA with Tukey’s multiple-comparison test. *P < 0.05.

A previous study has indicated that defensins promote ATP efflux for subsequent immune response (Vylkova et al., 2007). To address whether hBD2 enhances IL-1β production through promoting ATP efflux in LPS-primed THP-1 macrophages, the autocrine ATP inhibitor apyrase was used. It was indicated that apyrase did not influence the effect of hBD2 on IL-1β production (Fig. 3). 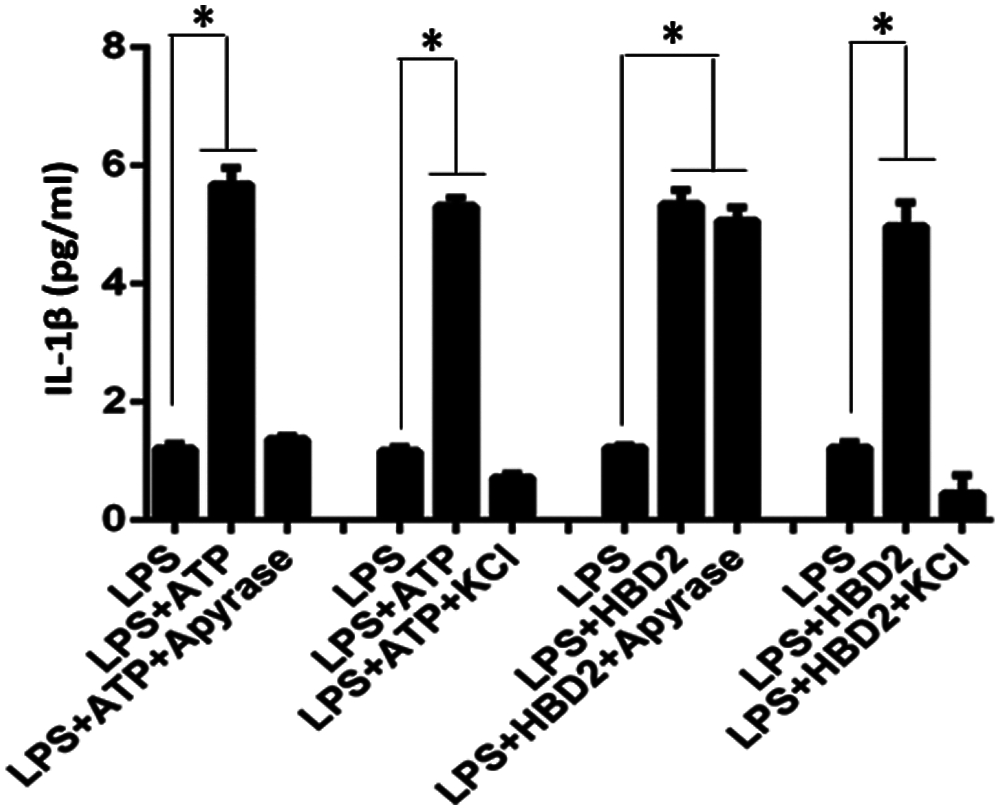 Figure 3: K+ efflux is required for IL-1β production in hBD2-treated LPS-primed THP-1 cells. The concentration of released IL-1β in the cell medium measured by ELISA (N = 3 per group.). Statistical analysis is based on a one-way ANOVA. *P < 0.05. Figure 5: hBD2 treatment of LPS-primed THP-1 cells increases IL-1β production through caspase-1 activation.
The concentration of released IL-1β in the cell medium measured by ELISA (N = 3 per group). Statistical analysis is based on a one-way ANOVA with Tukey’s multiple-comparison test. *P < 0.05. 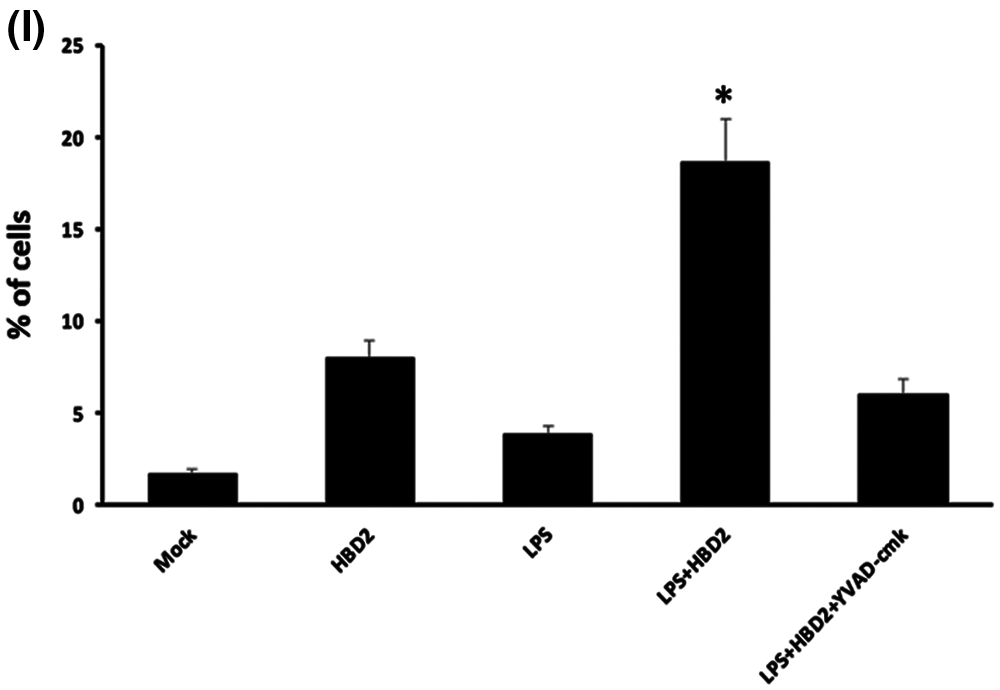 It was showed that hBD2 could induce the protein level of caspase 1, NLRP3, NF-kB and pro-IL-1β, suggesting that hBD2 may have the effect on protein synthesis of inflammatory cytokines. However, no study has indicated this effect of hBD2. As a non-coding RNA, miRNAs regulate protein expression of target genes at post-transcriptional level (Krol et al., 2010; Trionfini and Benigni, 2017). Limited studies have showed that defensin may be associated with microRNA regulation in the immune defense. All these studies together suggested that hBD2 may regulate protein level of inflammatory cytokines through miRNA (Duskova et al., 2013; Liao et al., 2017).

Several issues needed to be focused on in the future study. First, it remains to be determined whether hBD2 associated with P2X7 to mediate IL-1β production in hBD2 treatment of LPS-primed THP-1 macrophages, though a previous study has demonstrated that alarmins bind to P2X7 (Chen et al., 2014). Second, the mechanism how hBD2 regulates cytosolic K+ efflux and the pathway involved in hBD2-induced pyroptosis still needed to be identified. Third, the gingival hBD2 level and IL-1β level should be detected simultaneously for analyzing the relationship between hBD2 and IL-1β in periodontitis patients and the periodontitis model in mice. Finally, the role of hBD2 and IL-1β in periodontitis and pyroptosis should be further identified by the experimental mice model of periodontitis using LPS injections into the gingival tissue to mimic periodontal disease.

In summary, this study demonstrated that hBD2 induced NLRP3 expression to promote IL-1β production and pyroptosis through ATP-activated P2X7 in LPS-primed THP-1 macrophages. The present study illustrated the mechanism by which hBD2 promotes the inflammatory response and following pyroptosis and provided novel therapeutic targets for the treatment of periodontal disease.

Availability of Data and Materials: The data of the present study are available from the corresponding author upon reasonable request.