Stem cells including mesenchymal stem/stromal cells (MSCs) and hematopoietic stem cells (HSCs) are promising tools for regenerative medicine applications (Priester et al., 2020). Stemness properties of the stem cells include limitless self-renewal proliferation and the ability to differentiate into all cell-types in a body (Barati et al., 2021). Similarly, cancer stem cells also exhibit limitless self-renewal proliferation, which is eventually responsible for resistance to cancer-therapy and/or for cancer-relapse (Lang et al., 2021, Treisman, Li and Zhu, 2021). Obtaining the ability of infinite proliferation, cancer cells may become immortalized. In the meaning of self-renewal avoiding exhaustion, stem cells have to proliferate by themselves at least to keep their population with functioning stem cells (Fig. 1). For the self-renewal proliferation, quiescent initial stem cells should be stimulated by the proliferation-signaling from either outside or inside of the stem cells. Reactive oxygen species (ROS) may have physiological roles as signaling molecules that regulate stem cells function (Matsuda et al., 2018). In particular, redox-mediated regulation has significant implications for stem cell biology particularly in the hypoxic situation of repair-injuries (Paul et al., 2014). In general, the stem cells in a hypoxic microenvironment exhibit low levels of ROS that may allow to proliferate and/or to protect stem cells, whereas intermediate levels of ROS may promote the differentiation of stem cells (Pasha et al., 2021). High levels of ROS may cause the senescence of stem cells or apoptosis/cell-death. However, regulator mechanisms of the dynamism in different stem cells as well as downstream mechanisms about the homeostasis of stem cells are practically unclear. MSCs may secrete various cytokines and growth factors as well as extracellular vesicles termed secretome which contain microRNAs (miRNAs), mRNAs, and the cytokine/growth-factor proteins (Basalova et al., 2020). Secretome of stem cells may exert its effects generally via the paracrine signaling (Lanfredi et al., 2021). Consistently, recent reports also suggest that the activity of stem cells is predominantly mediated by the paracrine effect of secretomes (Jiang et al., 2021). In fact, manipulation of stem cells-derived secretome has emerged as a novel alternative therapeutic option for several diseases and/or in regenerative medicine (Rajan et al., 2016). The miRNAs frequently being enclosed in secretome are endogenous single-strand non-encoding RNAs with the length of about 20 nucleotides, which are generally found in eukaryotic organisms (Bartel, 2009). The miRNAs can affect the stability and/or translational efficiency of their target mRNAs resulting in downregulated gene expression and reduced protein output (Mohr and Mott, 2015). More than 1,000 miRNAs have been revealed to regulate a series of biological processes including proliferation, differentiation, and apoptosis (Dexheimer and Cochella, 2020). By utilizing this miRNAs in secretome, stem cells might provide proliferative signaling each other for the maintenance of stemness in a stem cell pool. In fact, miR21 in a stem cell exosome could enhance the proliferation of cells (Yang et al., 2020; Li et al., 2018). In addition, miR590 found in exosome has been established to be a promoter of cell proliferation, migration and invasion in numerous cancer cells, as well as in human umbilical cord MSCs (Liu et al., 2017). Interestingly, miR21 regulates the expression of BTG2, a member of APRO family, suggesting that miR21 and the expression of BTG2 are negatively correlated during carcinogenesis (Mao et al., 2015a). Besides, miR590 exerts their effects through targeting TOB1, also a member of APRO family. Furthermore, miR511 in exosome promotes the proliferation of human hepatoma cells by targeting the 3’UTR mRNA of BTG1, also a member of APRO family (Zhang et al., 2017). In addition, miR32-5p was significantly upregulated in colorectal cancer tissues compared with adjacent normal tissues, which might regulate proliferation/invasion of cancer stem cells through inhibiting and/or decreasing the expression of TOB1 in APRO family (Liang et al., 2019). Exosome containing miR486-5p has facilitated osteoblast differentiation by repressing TOB1 expression (Chen et al., 2020). In this way, the relationship between miRNAs and APRO family proteins has attracted much attention for the regulation of stem cell proliferation. 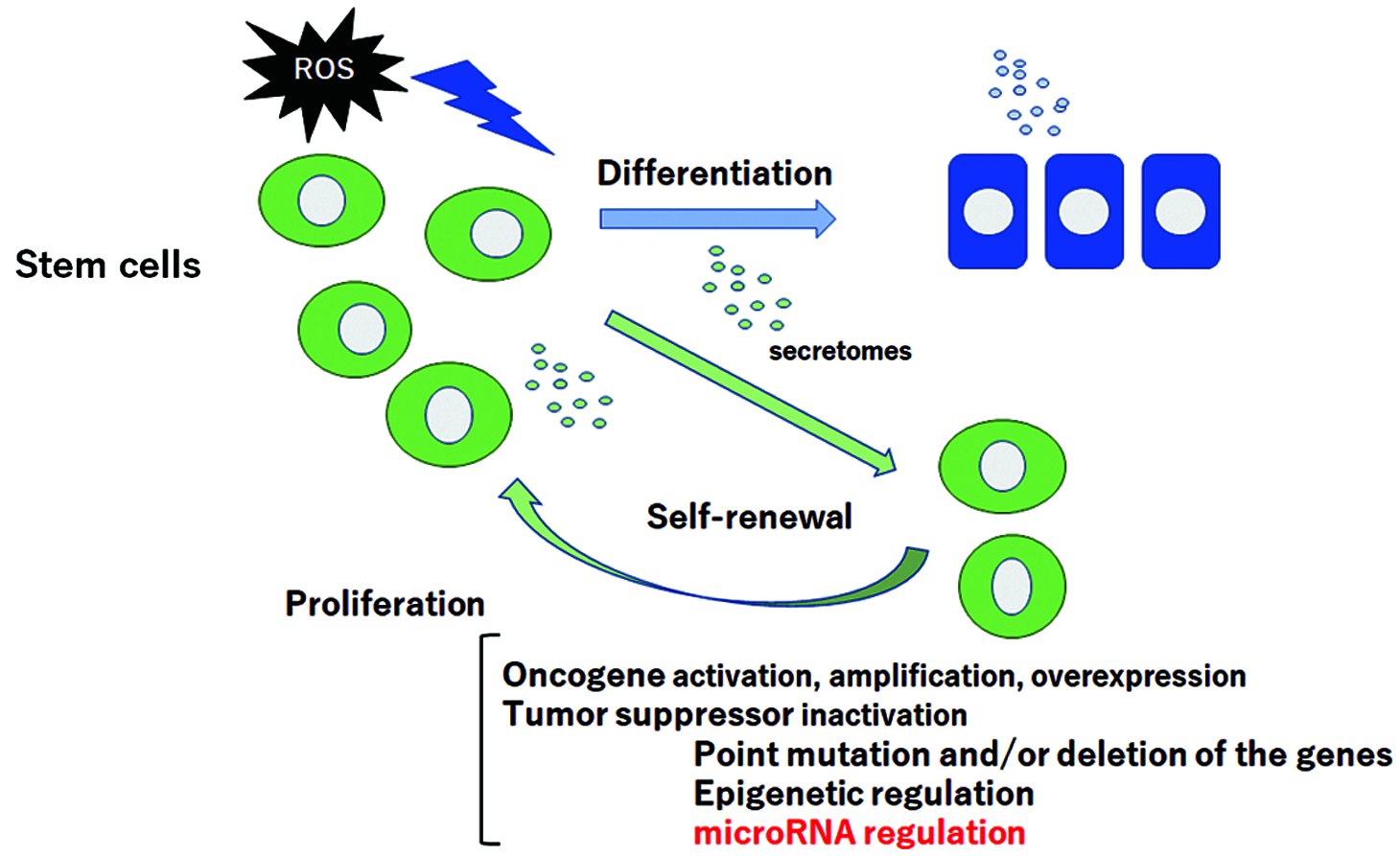 The APRO family anti-proliferative genes are characterized in immediate early growth responsive genes (Matsuda et al., 2001). The gene products include PC3/TIS21/BTG2, BTG1, TOB1, TOB2, ANA/BTG3, PC3B and others (Matsuda et al., 2001). These APRO family proteins have been described to participate in diverse human diseases such as cancers, which have also been implicated in a variety of cellular processes including cell-division, DNA repair, and mRNA stability (Yuniati et al., 2019). Accordingly, APRO family members consequently may be involved in physiological and/or pathological processes including cell proliferation, cell differentiation, apoptosis/programmed cell death, and acting as tumor suppressors (Yuniati et al., 2019). In fact, APRO protein expressions are frequently downregulated in many human cancers and in stem cells (Micheli et al., 2015). In addition, significant prognostic effects of APRO family members have been shown in defined cancer types (Yang, Shen & Sun, 2018). As for stem cells, knockdown of TOB1 has increased proliferative activity of rat MSCs in vitro (Gao et al., 2016). The expression of TOB1 in MSCs may also be regulated by miR218 (Gao et al., 2016). In addition, TOB1 and TOB2 could inhibit proliferation of mouse embryonic stem cells, which does not compromise the basic properties of stem cells (Chen et al., 2015). Downregulation of Nanog with siRNA has resulted in reduction of pluripotency markers such as Klf2 and Oct-4 in P19 stem cells, whereas expression of TOB1 has been upregulated by the Nanog-silencing (Choi et al., 2012). BTG1 appears to be required for maintaining stem cells quiescence and self-renewal (Farioli-Vecchioli et al., 2012). In addition, TIS21/BTG2 plays a pivotal role in maintaining the actual stem cells compartment in HSCs and hematopoiesis (Kim et al., 2008). BTG2 interacts with CAF1 deadenylase through its APRO domain, a defining feature of APRO family, to control cell proliferation (Stupfler et al., 2016). Long serial analysis of gene expression has suggested that TOB1 is differentially expressed during prenatal skeletal muscle development (Yuan et al., 2011). The expression of TOB1 increases with cellular senescence or aging, demonstrating that the proliferation potential of myoblasts decreases along with the increase of TOB1 in postnatal muscle development (Yuan et al., 2011). In addition to affecting proliferation/differentiation during cellular development, all APRO family proteins might play an imperious role on keeping homeostasis in normal healthy cells but not in cancerous cells under a physiological condition in cellular stresses and/or carcinogenesis. It seems to be impossible that almost all cancer cells would differentiate without cancer-healing. For example, genomic profiling of B-cell leukemia and lymphoma has pointed BTG1 towards a role as a rising star of tumor suppressors (Moafi et al., 2017; Mao et al., 2015b), since BTG1 is frequently deleted or mutated in these malignancies (Moafi et al., 2017; Mao et al., 2015b). Furthermore, plasma exosome-derived BTG-1 protein may be a potential biomarker for the prognosis in patients with non-small cell lung cancer (Wan et al., 2021). Tumor growth suppression by adenovirus-mediated introduction of TOB1 in pancreatic cancer has been reported suggesting an application for chemotherapy-resistant cancer peritonitis (Yanagie et al., 2009). Problems of the engineered adenovirus vectors lie in the limited duration of target gene expression and the immunogenicity of the viruses. Artificial exosomes containing APRO proteins could suppress therapy-resistant cancer cell growth with less immunogenicity. The relationship between APRO molecules and carcinogenesis in a cell may be reminiscent of the relationship between cytotoxic T cells and cancer cells in a body called “immune check points”. (Fig. 2) We would like to suggest here tentatively to use a term “stemness check points” for the former relationship. As mentioned above, we consider the “stemness check points” molecules seem to be certain miRNAs. In general, cancer cells might contain cancer stem cells. Hence, we suppose that the word “stemness check points” could be replaced with the word “onco-check points”. These findings have suggested that APRO genes and/or proteins might work as potential implements for cancer therapy. However, it has to be confirmed accurately and would be a part of future intensive research. 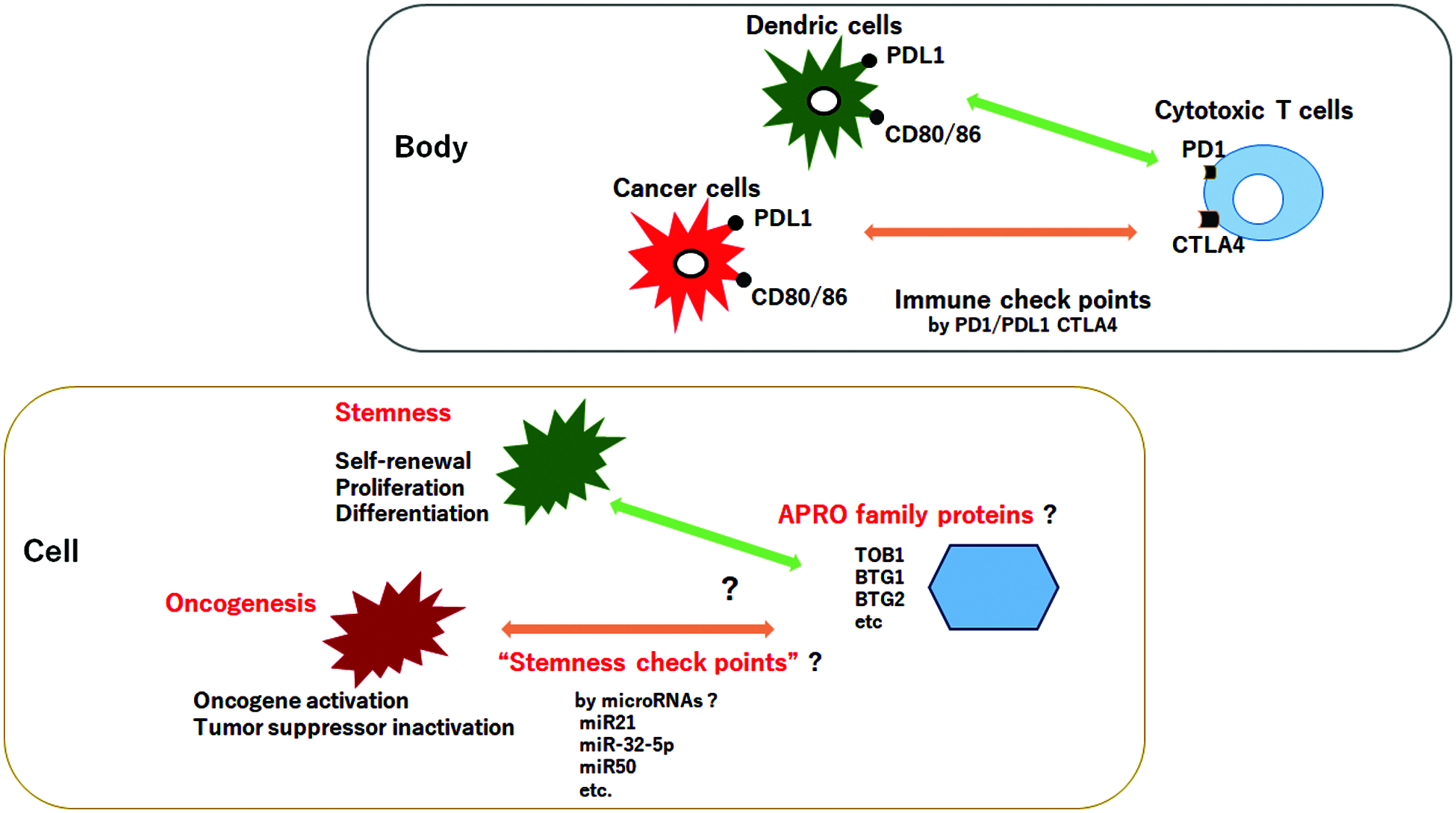 Figure 2: The relationship between cytotoxic T-cells and cancer-cells/dendritic-cells in a body resembles to the relationship between tumor suppressor APRO family proteins and oncogenesis/stemness-homeostasis in a cell. It could be hypothesized that the former is regulated with “immune checkpoints” molecules such as PD1/PDL1 and CTLA4, whereas the latter may be regulated by “stemness checkpoints” microRNAs for targeting APRO family proteins.