An Adjustable Variant of Round Robin Algorithm Based on Clustering Technique

Abstract: CPU scheduling is the basic task within any time-shared operating system. One of the main goals of the researchers interested in CPU scheduling is minimizing time cost. Comparing between CPU scheduling algorithms is subject to some scheduling criteria (e.g., turnaround time, waiting time and number of context switches (NCS)). Scheduling policy is divided into preemptive and non-preemptive. Round Robin (RR) algorithm is the most common preemptive scheduling algorithm used in the time-shared operating systems. In this paper, the authors proposed a modified version of the RR algorithm, called dynamic time slice (DTS), to combine the advantageous of the low scheduling overhead of the RR and favor short process for the sake of minimizing time cost. Each process has a weight proportional to the weights of all processes. The process’s weight determines its time slice within the current period. The authors benefit from the clustering technique in grouping the processes that are similar in their attributes (e.g., CPU service time, weight, allowed time slice (ATS), proportional burst time (PBT) and NCS). Each process in a cluster is assigned the average of the processes’ time slices in this cluster. A comparative study of six popular scheduling algorithms and the proposed approach on nine groups of processes vary in their attributes was performed and the evaluation was measured in terms of waiting and turnaround times, and NCS. The experiments showed that the proposed algorithm gives better results.

This section is divided into two subsections: (i) CPU scheduling, and (ii) Clustering technique.

The most common of the preemptive scheduling algorithms is the RR scheduling [5], known hereafter as Standard RR (SRR), used in timesharing and real-time operating systems [6]. In RR scheduling, the operating system is driven by a regular interrupt by the system timer after a short fixed interval called standard time slice (STS) [7–10]. After that interruption, the scheduler switches the context to the next process selected from the circular queue [11,12]. Thus, all processes are given a chance to receive CPU service time for a short fixed period. The fixed time slice influences the efficiency of RR algorithm; short time slice leads to high overheads, and long time slice may leads to starvation between processes. In addition, scheduling criteria (i.e., waiting time, turnaround time, and NCS) affect performance of the scheduling algorithm [13–15].

Clustering means dividing the data into groups that are useful and meaningful [16]; greater homogeneity (or similarity) within a cluster and greater difference between clusters bring about better clustering. Clustering is a type of classification in that it generates labels of the clusters [17,18]. Classification of data can be completed using clustering without prior knowledge. A clustering algorithm is the process of dividing abstract or physical object into a collection of similar objects. Cluster is a collection of data points; points in the same cluster are like each other and different from points in other clusters. The type of the data determines the algorithm used in the clustering, for example, statistical algorithms are used for clustering numeric data, categorical data is clustered using conceptual algorithms, fuzzy clustering algorithms allow data point to be classified into all clusters with a degree of membership ranging from 0 to 1, this degree indicates the likeness of the data point to the mean of the cluster. Clustering algorithms are categorized into traditional and modern [19]. K-means is the most commonly and simplest clustering algorithm. Its simplicity comes from the use of the squared error as stopping criterion. In addition, the time complexity of the K-means algorithm is low O(nkt), where n: the number of objects, k: The number of clusters, and t: The number of iterations. K-means algorithm divides the dataset into K clusters (

), represented by their centers or means to minimize some objective function that depends on the vicinity of the subjects to the cluster centroids. The function to be minimized in K-means is described in Eq. (1) [20].

where K is the number of the clusters set by the user,

is the weight of x,

is the centroid of cluster Ck, and the function ‘dist’ computes the distance between the object x and the centroid

. The K-means clustering method requires all data to be numerical. The pseudo-code of K-means algorithm is as follows:

1. Apply the clustering algorithm for different values of k. For instance, by varying k from 1 to n clusters.

2. For each k, the total Within-cluster Sum of Square (WSS) is calculated.

3. Plot the curve of WSS according to the value of k.

4. The location of a knee in the curve indicates the appropriate number of clusters.

Organization: The rest of this paper is divided as follows: Section 2 discusses the related work. The proposed algorithm is presented in Section 3. Section 4 discusses the experimental implementation. Section 5 concludes this research work (see Fig. 1). 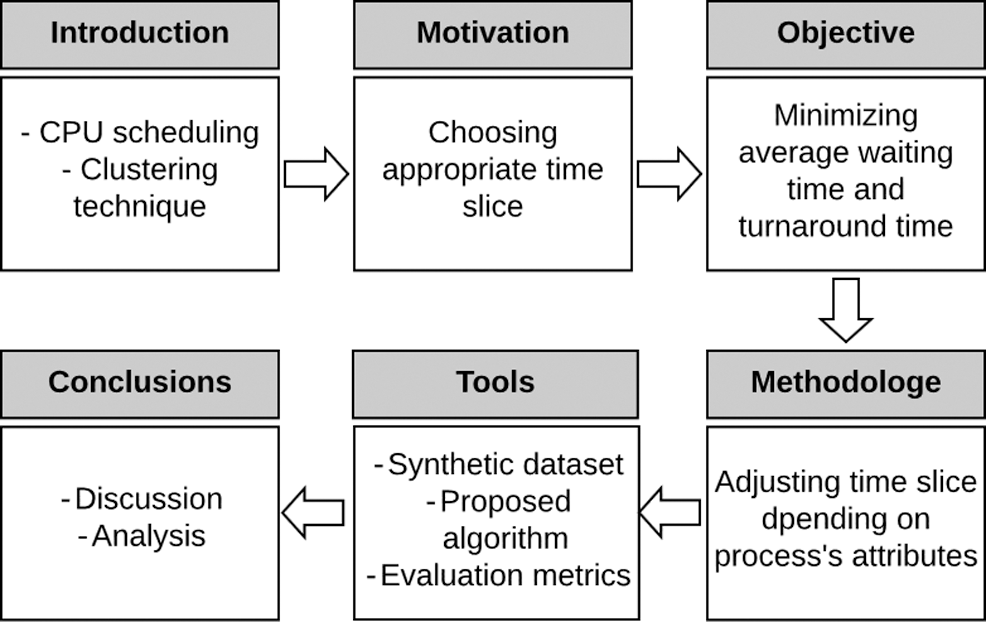 Figure 1: Organization of the paper

in the successive rounds. Lipika benefited from SJF in which the processes are ordered increasingly based on their burst times (i.e., the process with the highest burst time will be at the tail of the ready queue and the process with the lowest burst time will be at the head of the queue) [25–27]. Adaptive80 RR is a dynamic variant of SRR proposed by Christoph and Jeonghw [6]. The time quantum equals process’s burst time at 80th percentile. The authors imitated Lipika’s [24] in sorting the processes in increasing order, and the time slice in each is calculated depending on the burst times of the processes in the queue. A hybrid scheduling technique based on SJF and SRR named SJF and RR with dynamic quantum (SRDQ) is proposed by Samir et al. [28]. SRDQ divided the queue into Q1 and Q2 based on the median; Q2 for long the processes (longer than the median) and Q1 for the short processes (shorter than the median). Like Lipika’s [24] and Adaptive80 RR [6] algorithms, SRDQ sorts the processes in the queue in ascending order in each subqueue. Proportional Weighted Round Robin (PWRR) is a modified version of SRR proposed by Samih [15]. PWRR assigns the time slice to a process proportional to its weigh which is calculated by dividing its burst time by the summation of all processes’ burst times in the queue. Adjustable Round Robin (ARR) is another dynamic version of the SRR proposed by Samih et al. [13]. Under a predefined condition, ARR gives short process a chance of execution until termination without interruption. Amended Dynamic Round Robin (ADRR) is a dynamic version of SRR proposed by Uferah et al. [12]. In every cycle, the time slice is adjusted based on the burst time of the process. Like Lipika’s [24], SRDQ [28] and Adaptive80 RR [6] algorithms, the processes are sorted in ascending order. Dynamic Round Robin (DRR) CPU scheduling algorithm is a dynamic version of the SRR algorithm based on clustering technique proposed by Samih et al. [29]. DRR starts by grouping similar processes in a cluster; the number of clusters is obtained from Silhouette method. Each cluster has a weight and is assigned a time slice, and all processes in a cluster are assigned the same time slice. They benefit from the clustering technique in grouping processes that resemble each other in their features. 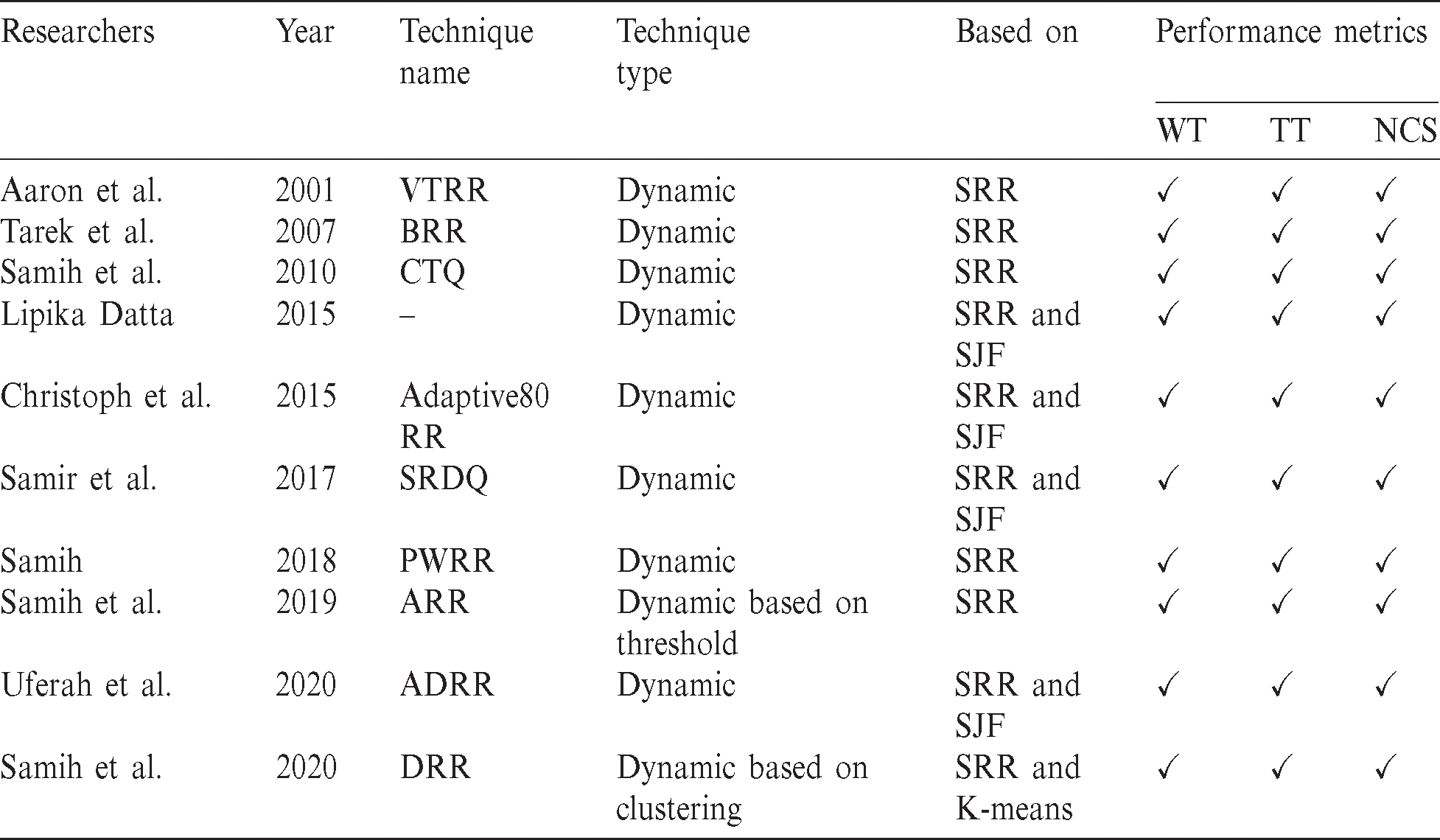 The processes’ weights (PW), ATS, PBT, and NCS depend on the process’s burst times (BT), and are calculated in the next subsections. The proposed work starts by grouping similar processes in clusters. The similarity between processes depends on BT, ATS, NCS, PW and PBT. K-means is the most commonly algorithm used in clustering. The proposed work consists of three phases: Data preparation, data clustering, and dynamic implementation.

In the data preparation phase, PW and NCS are calculated. The weight of the ith process (PWi) is calculated from Eq. (3):

where N is the number of the processes, and BTi is the burst time of the ith process. NCS is calculated from Eq. (4):

STS is determined by SRR, and

indicates the largest integer smaller than or equal to X. If the burst time of a process is greater than the STS, the time slice of this process equals STS. The ATS assigned to a process in a round is calculated from Eq. (5).

PBT of a process in a round is calculated from Eq. (6).

The proportional time slice (PTS) of a process in a round is calculated from Eq. (7).

In the data clustering phase, Silhouette method is used to find the optimum number, k, of clusters, then K-means algorithm clusters the data into k number. BT, PW, ATS, PBT and NCS are the clustering metrics used in the proposed work. Each data point is assigned to the nearest centroid, each group of points assigned to the same centroid results cluster. The assignment and updating steps are repeated until all centroids do not change. The Euclidean (L2) distance is used to quantify the notion of ‘closest’.

In the dynamic implementation, the process with long burst time results small PTS, which causes many NCS. To avoid overhead resulted from more NCS, a threshold which is an implementation choice is determined. The weight of the

executes for CTSl. Awarding more time to the process that is close to its completion enables it to complete its execution and leave the queue, which in turn decreases the number of processes in the queue.

is the dynamic time slice assigned to process Pr in cluster l. In successive rounds, RBT will be updated according to Eq. (11). The proposed algorithm is described in Fig. 2. 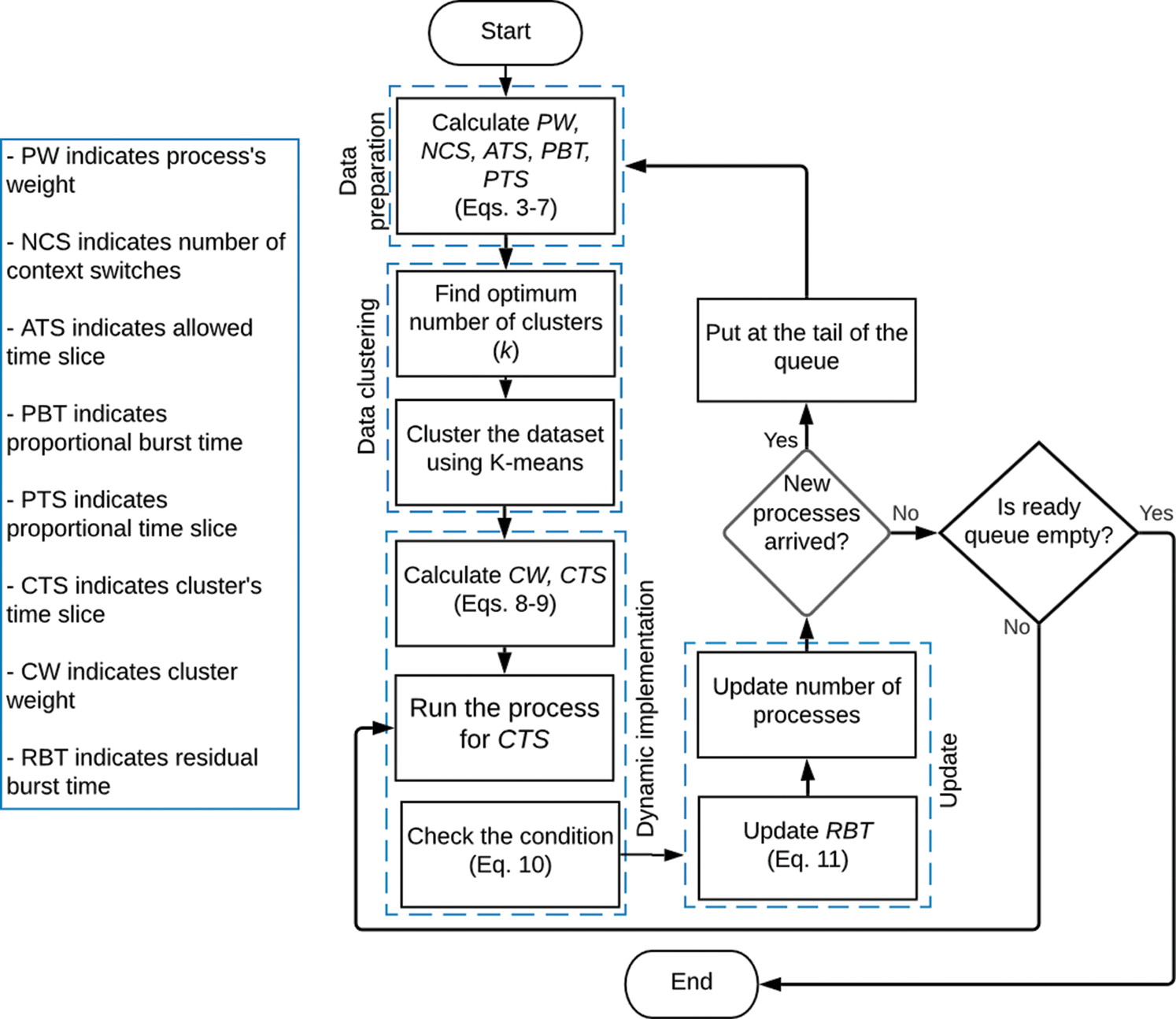 The following example illustrates the proposed technique. Tab. 2 contains the first dataset used in the experiments. The optimal number of clusters is indicated from the location of a knee in the curve in Fig. 3. 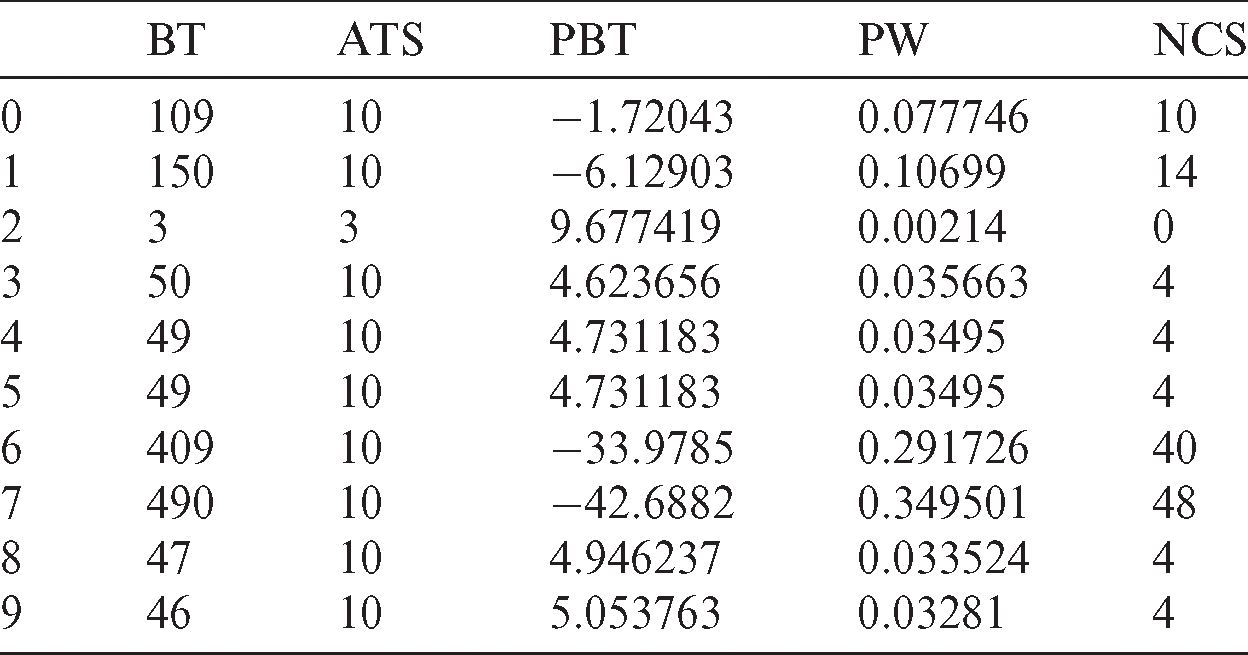 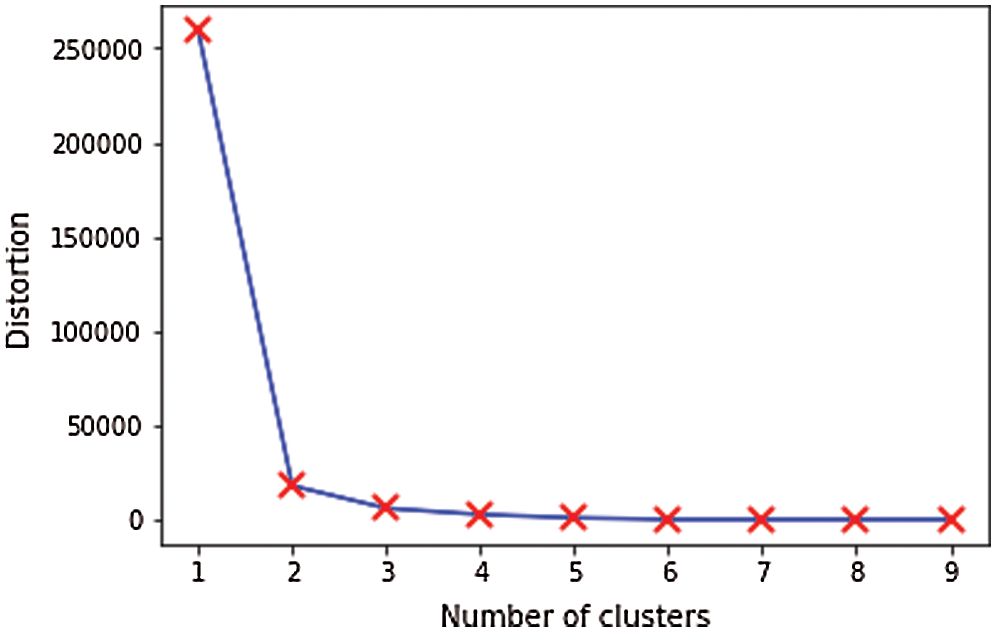 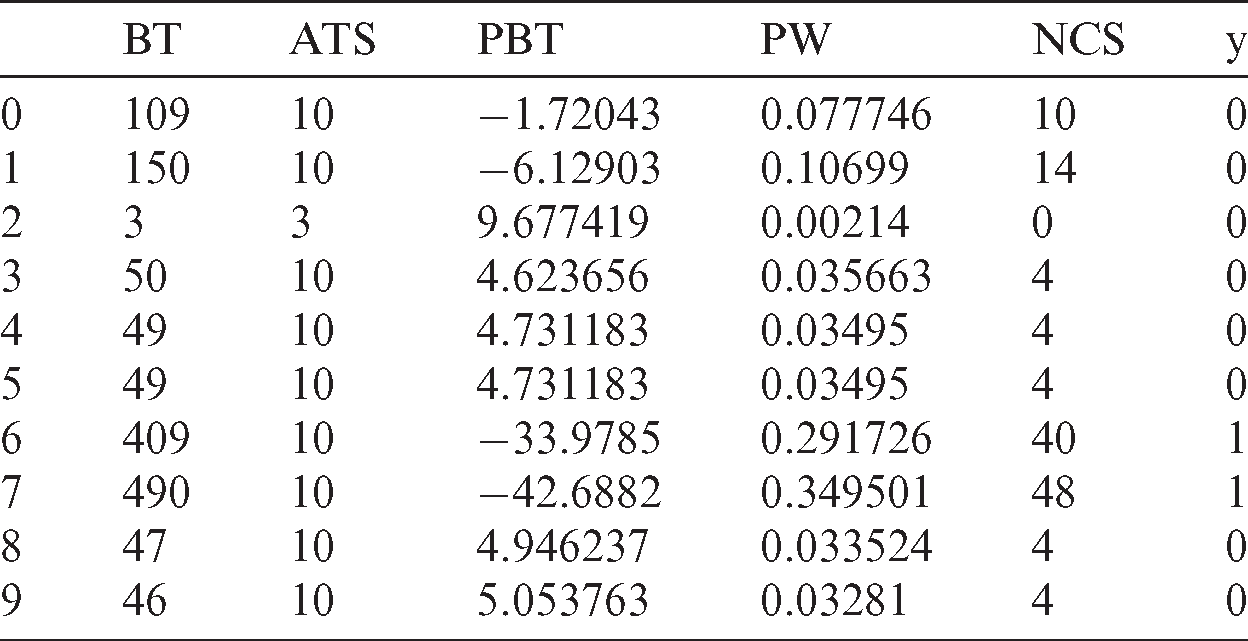 The performance of the compared algorithms was tested using nine synthetic datasets [29]. The burst times in each dataset are randomly generated. The number of process, BTs, NCSs, PBT, and ATSs in each dataset differ from the other. Detailed information on datasets is presented in Tab. 4. 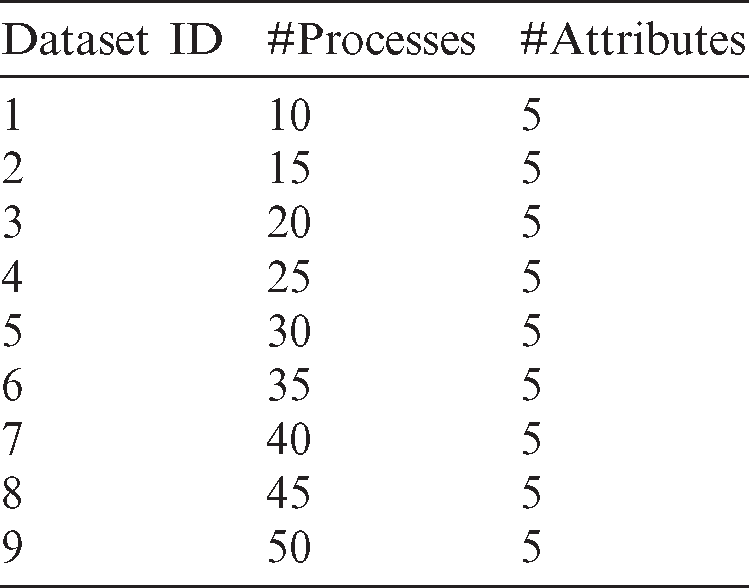 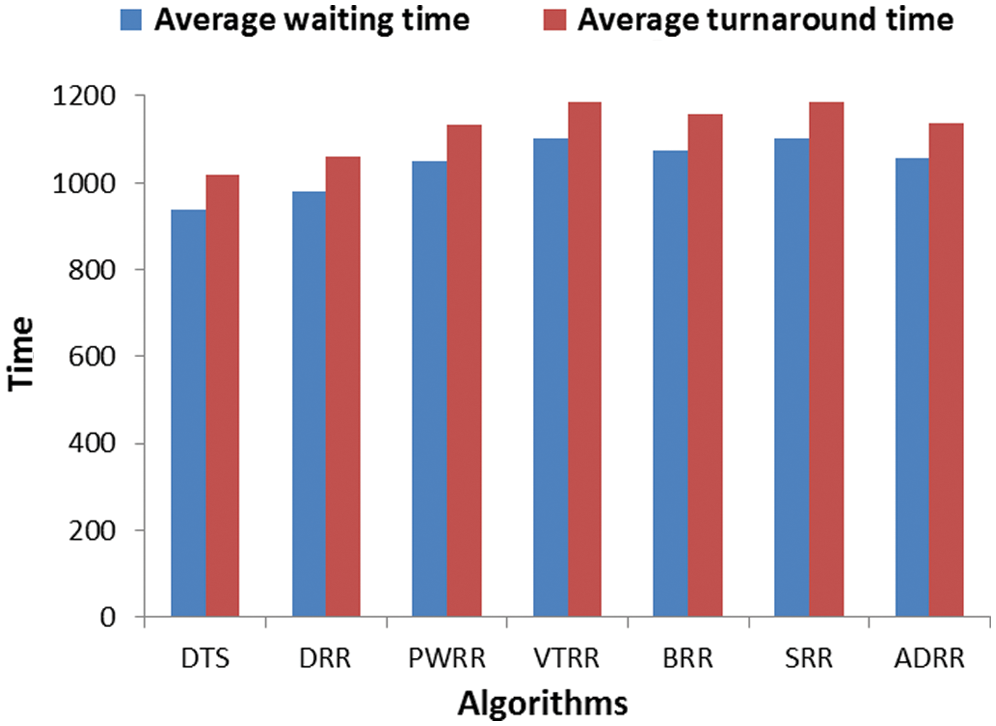 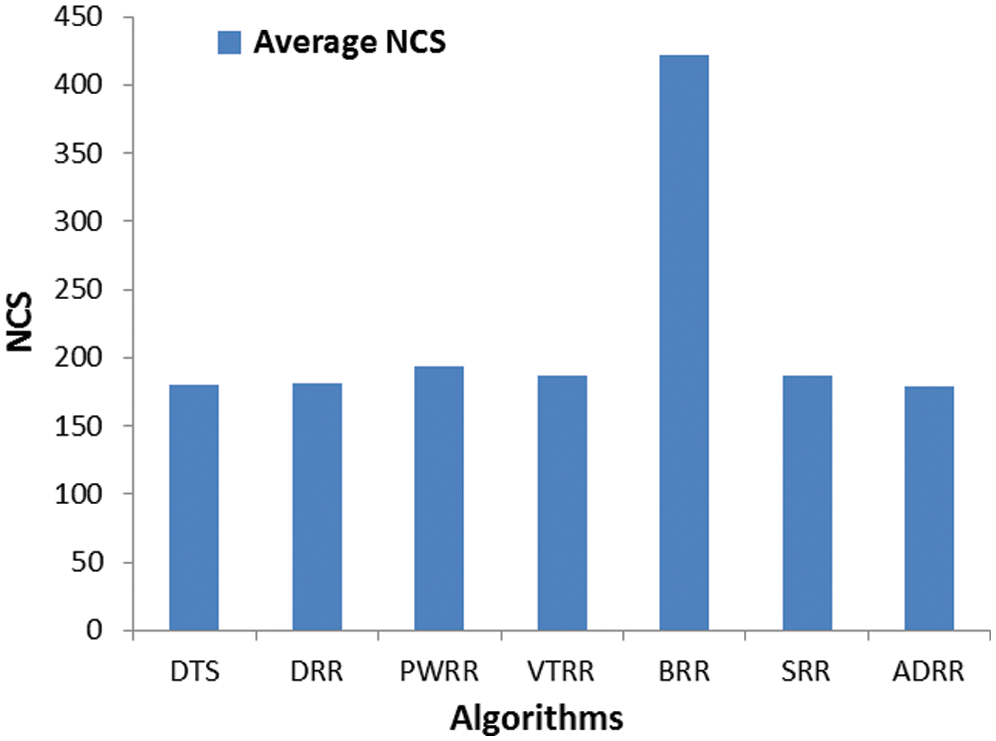 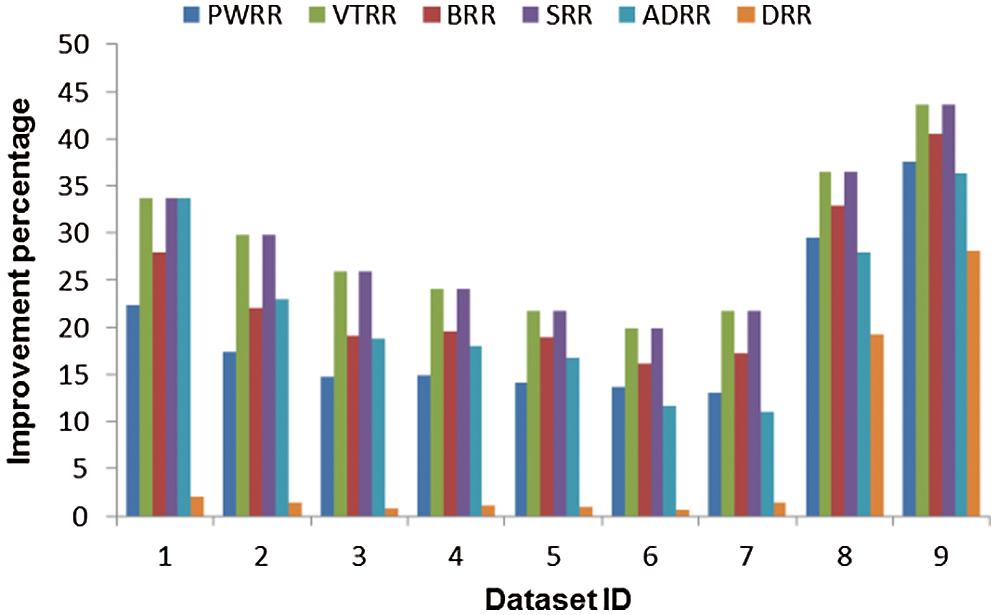 Figure 6: Improvement percentage of the proposed algorithm over the compared algorithms (case 1) 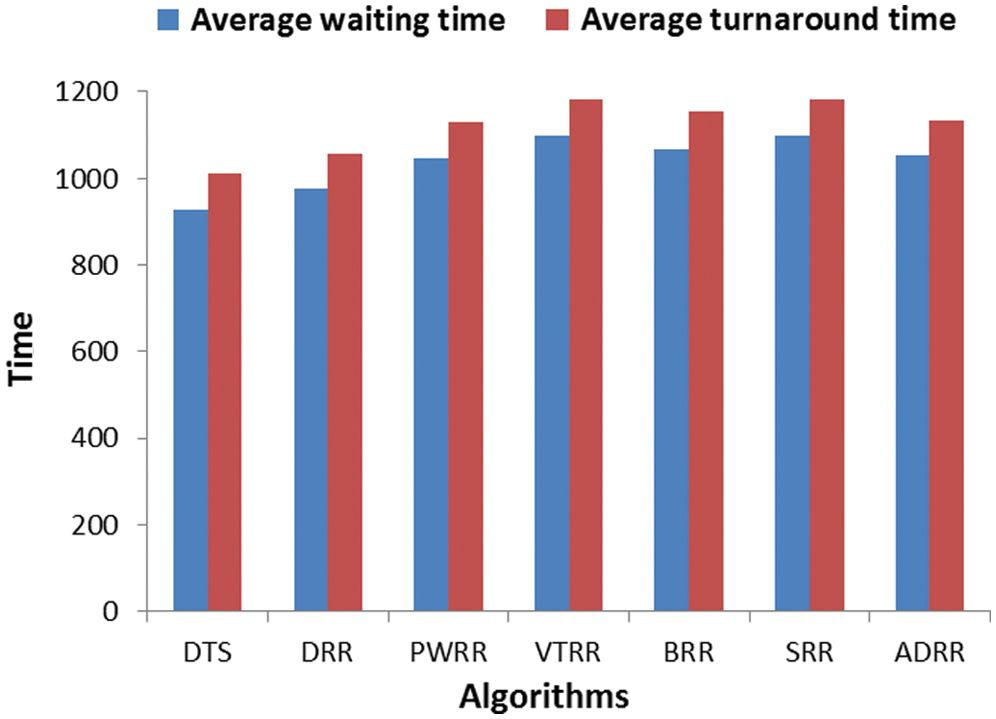 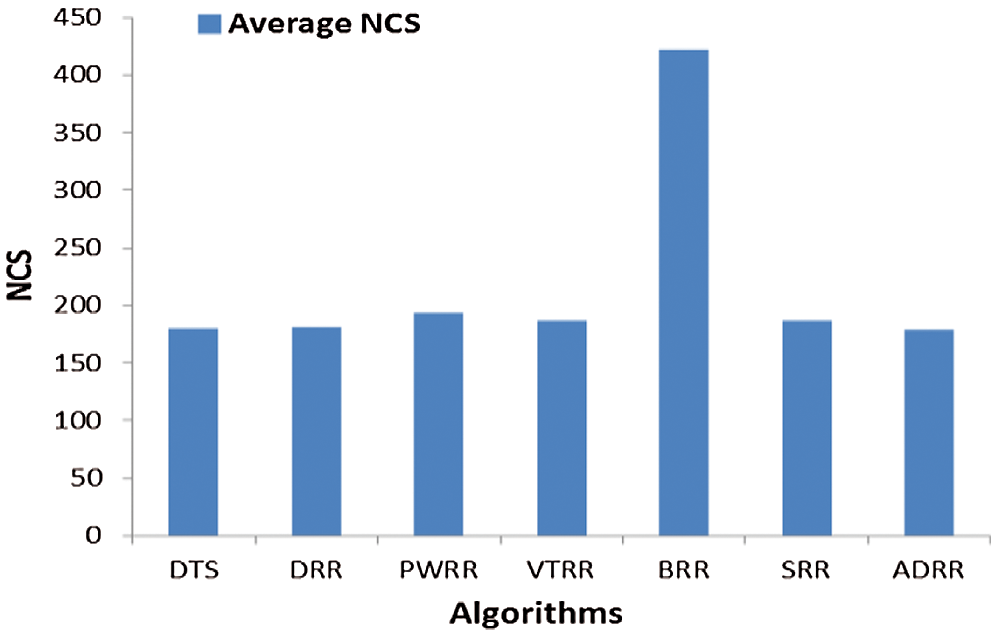 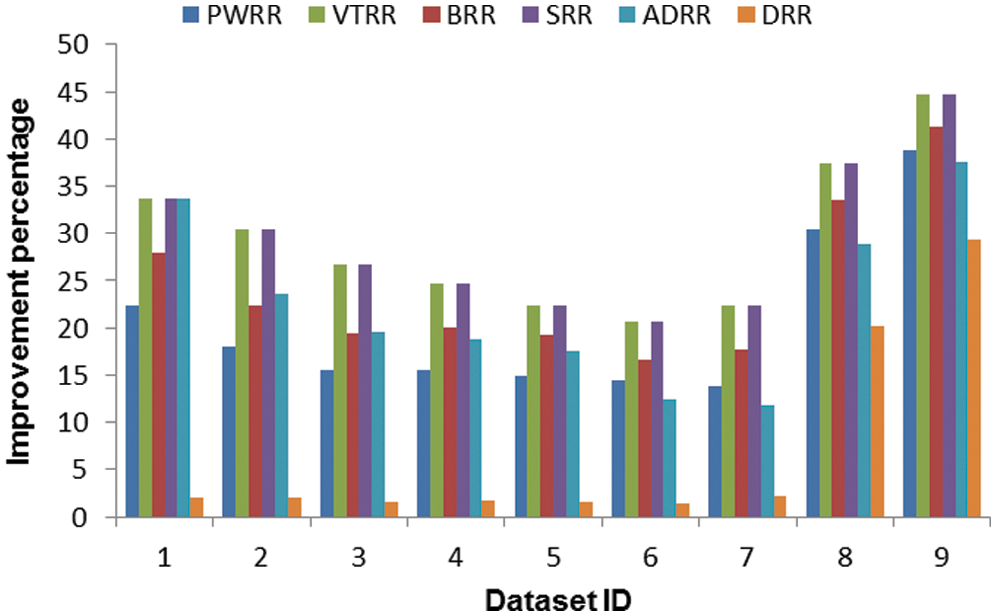 Figure 9: Improvement percentage of the proposed algorithm over the compared algorithms (case 2)

Funding Statement: The author(s) received no specific funding for this study.

Table A2: Improvement percentages of the proposed algorithm over six scheduling algorithms (case 1)

Table B3: Improvement percentages of the proposed algorithm over six scheduling algorithms (case 2)