Abstract: Object recognition and location has always been one of the research hotspots in machine vision. It is of great value and significance to the development and application of current service robots, industrial automation, unmanned driving and other fields. In order to realize the real-time recognition and location of indoor scene objects, this article proposes an improved YOLOv3 neural network model, which combines densely connected networks and residual networks to construct a new YOLOv3 backbone network, which is applied to the detection and recognition of objects in indoor scenes. In this article, RealSense D415 RGB-D camera is used to obtain the RGB map and depth map, the actual distance value is calculated after each pixel in the scene image is mapped to the real scene. Experiment results proved that the detection and recognition accuracy and real-time performance by the new network are obviously improved compared with the previous YOLOV3 neural network model in the same scene. More objects can be detected after the improvement of network which cannot be detected with the YOLOv3 network before the improvement. The running time of objects detection and recognition is reduced to less than half of the original. This improved network has a certain reference value for practical engineering application.

Object recognition and location have important application value in the service robot, industrial automation, self-driving, and other fields. In the traditional methods, the objects in the scene are mostly segmented by the features of the objects to achieve the purpose of recognition [1–4]. According to the nature of feature extraction, the object recognition method can be classified into global feature and local feature. Global features refer to the overall attributes of the image, including features such as color, texture, and shape, which are characterized by good invariability, simple calculation, and intuitive representation [5]. Local features refer to the features extracted from the local area of the image, including features such as edges, corners, lines, etc., which have a small degree of correlation between features and will not affect the detection and matching of other features due to the disappearance of some features under occlusion [6]. Traditional scene object recognition methods can only segment and recognize simple objects with low recognition accuracy and efficiency. In the case of complex indoor scenes, object recognition effect is even worse. For the location of scene objects, the common method is to use binocular stereo vision to calculate the image parallax map and obtain the location information of each pixel in the whole scene image, which may have defects such as low calculation accuracy and slow speed. In recent years, with the development and application of deep learning technology in the direction of machine vision, it provides a new research direction for scene object recognition [7]. For example, Yang et al. [8] proposed an improved fast-YOLO model, combined with semi-global matching SGM algorithm to process binocular image data, and realized the detection and location of scene pedestrians. Peng et al. [9] used the Mask R-CNN neural network model combined with the nearest point search algorithm (ICP) to realize the recognition and location of scene objects in binocular vision.

In view of the problems such as low accuracy of scene object recognition and location, this article proposes an improved YOLOv3 neural network combining the with RGB-D camera to realize real-time identification and location of indoor objects.

In our experiments, it is found that when YOLOv3 network is applied to object recognition in indoor scenes, there are problems such as slow recognition speed and object missing detection in dark places. Aiming to solve the above problems, this article proposes an improved YOLOv3 network to increase the real-time performance of the network and the robustness of object detection and recognition. The DarkNet53 is used by YOLOv3 as the backbone network, the network is characterized by the use of a deep residual network (ResNet) to alleviate the problem of gradient disappearance caused by increasing depth. When the network is deeper, the effect of feature transmission is gradually weakened, which will reduce the robustness of the network to object detection and recognition. This article proposes a method to build the backbone network of YOLOv3 by combining the deep residual network (ResNet) with the densely connected convolutional networks (DenseNet).

In a neural network, more abundant image features are obtained by stacking the number of layers of the network, so the increase in the number of network layers means that the extracted features of different layers are richer. However, this is not the case. As the network deepens, the performance of the network quickly reaches saturation, and then even performance degradation begins. In order to solve the problem of network performance degradation, He et al. [14] proposed a deep residual network model, which greatly solved the problem of performance degradation caused by network deepening. Depth of the residual network is the core of the block as a unit, as shown in Fig. 1. Each cell block is composed of a series of layers and a shortcut. The shortcut connects the input and output of the module together, and then add at the element level crossing the middle tier. It does not produce additional parameters and increase the complexity of the calculation, and ensure that the performance of the network after deepening will not be worse than before.

In a deep residual network, because adding shortcut identity mapping, it can express the input and output relationships at level l by:

In this formula, Xl −1 is the input image feature, l is the layer number of neural network, stands for nonlinear operational combinations including BN (Batch Normalization), ReLu, convolution, and Xl is the output image feature. 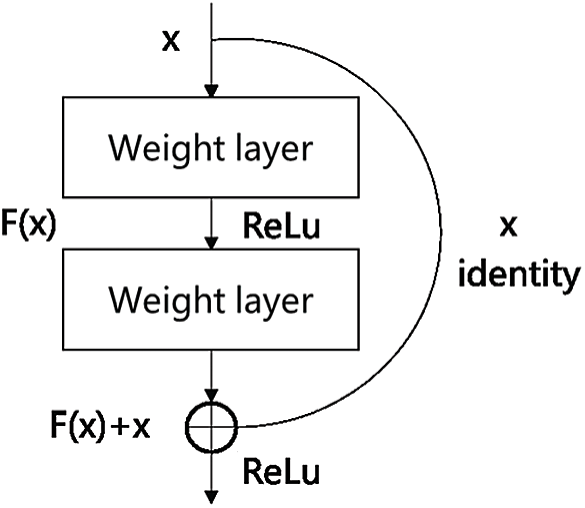 In DenseNet, the input and output relationship of layer l can be represented by the following formula since the current layer is closely connected to all the subsequent layers:

Deep residual network and densely connected convolutional networks are combined as the backbone network of YOLOv3. After many times of improvement and experimental verification, an improved network model is finally obtained, and the new backbone network structure is shown in Tab. 1. 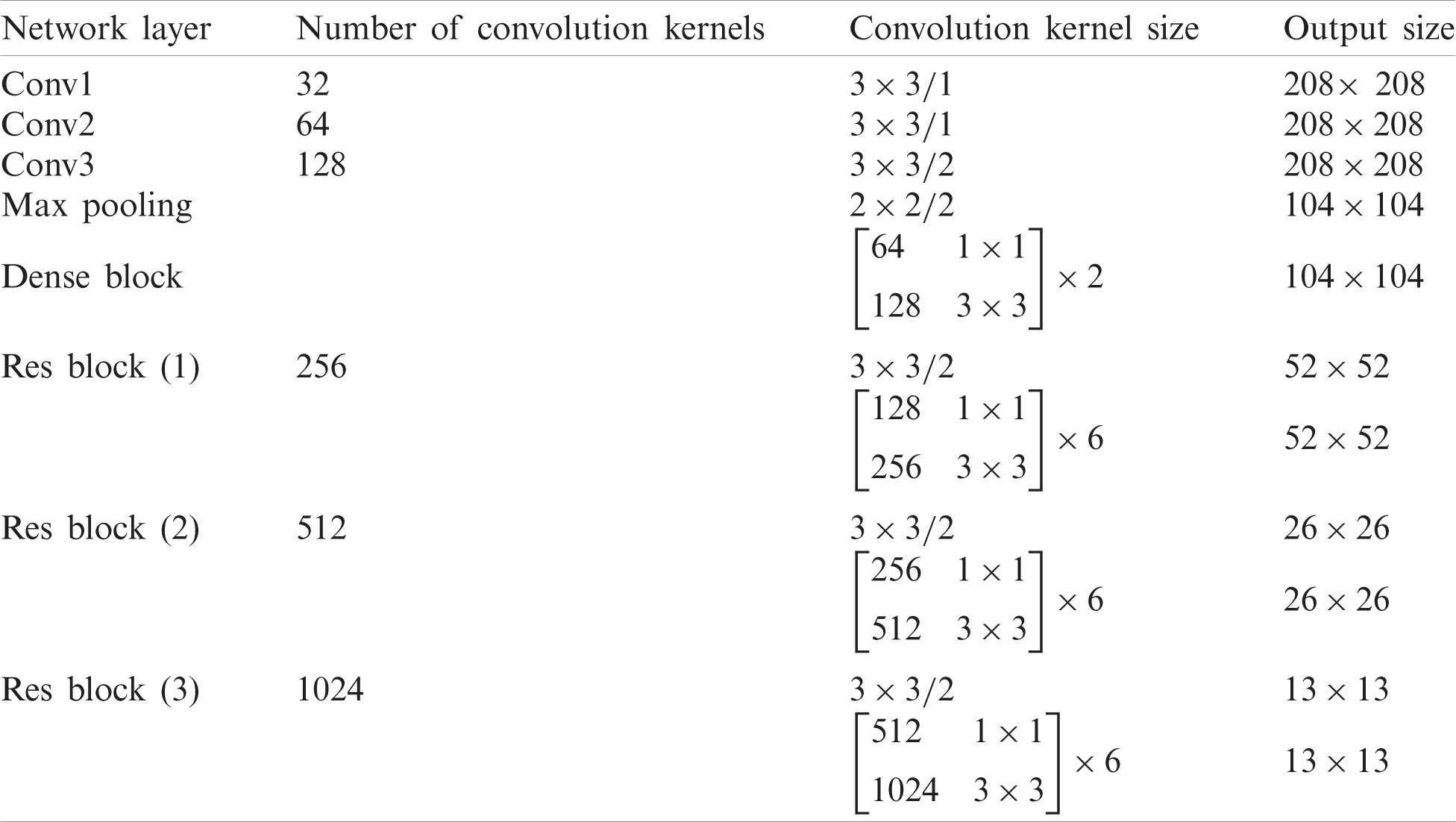 In the improved combined network, the input image is subjected to 1 densely connected convolution networks and 3 deep residual networks to extract features. Compared with the original DarkNet53 backbone network, the new combined network uses densely connected convolution networks and shallow images features can be communicated to deep convolutions better and faster, realizing multi-feature multiplexing and fusion. It can effectively increase the information transmission efficiency and gradient transmission efficiency of the entire network, which is conducive to the combination of up sampling and shallow features. The new combined network still uses the residual network as feature extraction network. The feature extraction network structure has three residual blocks, which improves the ability to select and extract features. Fig. 3 shows the new backbone network.

The RGB-D camera used in this article is a RealSense D415 depth camera produced by Intel. This camera can obtain both RGB and depth maps, and can easily build point cloud maps based on the obtained RGB and depth maps. It has binocular infrared camera combined with infrared structured light coding technology, and it can obtain the depth information of the scene quickly and conveniently.

In order to verify the effect of the networks, we do some experiments with a RealSense D415 camera. RealSense SDK 2.0 is used to provide API interface driver for RealSense D415 RGB-D sensors, and it can read the RGB image and depth map with the frame rate at 25 fps.

In this experiment, 3584 indoor scene pictures are collected, 2560 of which are used as training set data and 1024 as verification set data. LabelMe annotation tool is used to label the objects in the indoor scene pictures. The objects are labeled mainly include cups, people, books, tables, chairs, mobile phones and computers. The annotation information is exported as a Json file. The marking process is shown in Fig. 4. 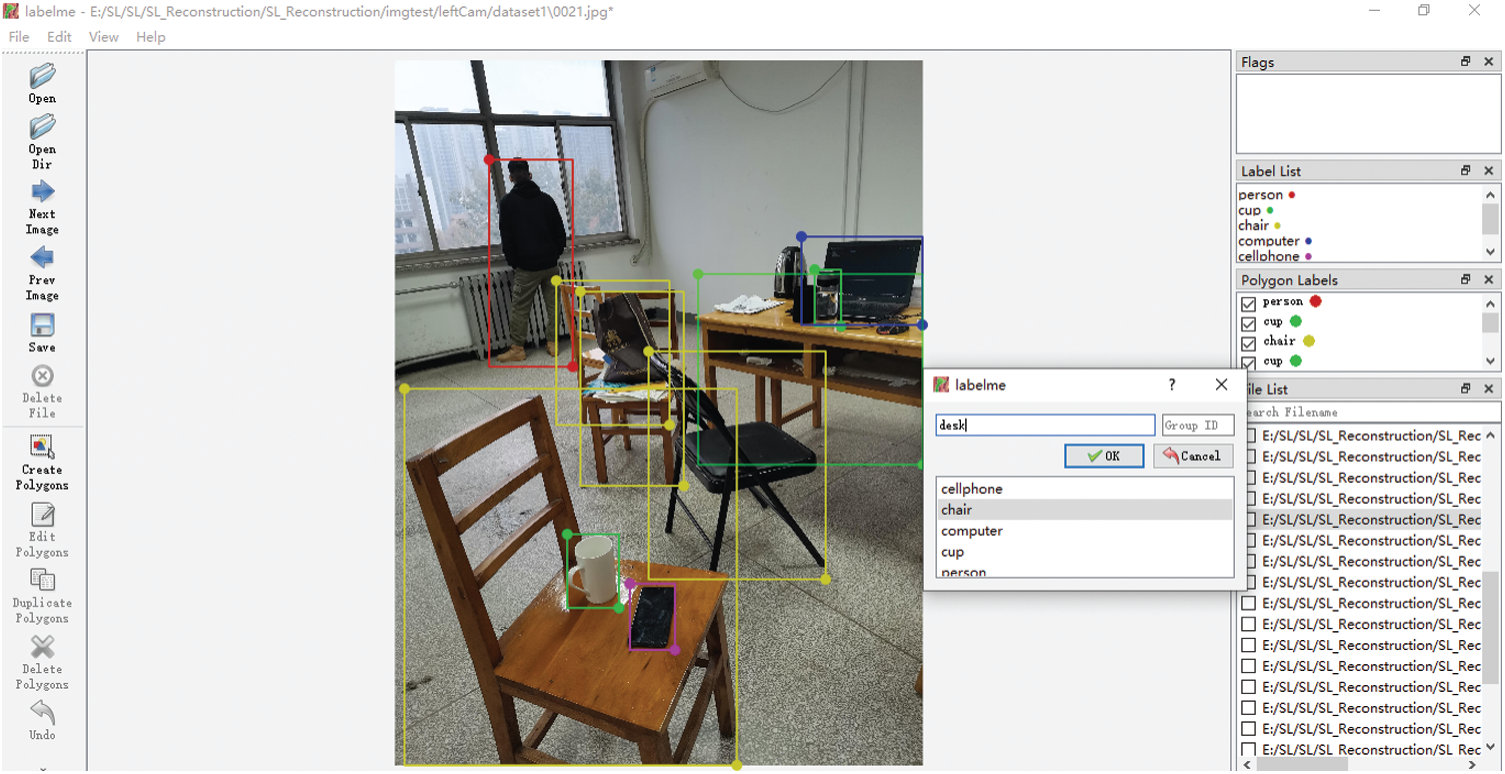 In order to increase the size of the training set, we use transfer learning to train the collected indoor scene data based on COCO dataset. COCO data set is a huge deep learning data set released by Microsoft. It includes about 200000 tagged images, more than 1.5 million object instances, and a total of 80 categories [16]. The experimental platform used in this paper is: Intel Core i7-8300k CPU, GeForce GTX 1080 GPU, 16G RAM, Windows 10 system. The training rate is set to 0.001. Multi-scale strategy is used to generate more training samples by rotating angle, adjusting saturation or exposure, which improves the robustness of the network model for object recognition in different indoor environments.

Fig. 5 is the curve of accuracy and loss with the number of iterations when the improved YOLOv3 network is used to train the indoor scene data set. It can be seen from the figure that when the training network is iterated to about 20,000 times, the accuracy has basically tended to 100%, and the loss value has basically stabilized. From the perspective of parameter convergence, the network training results are ideal. 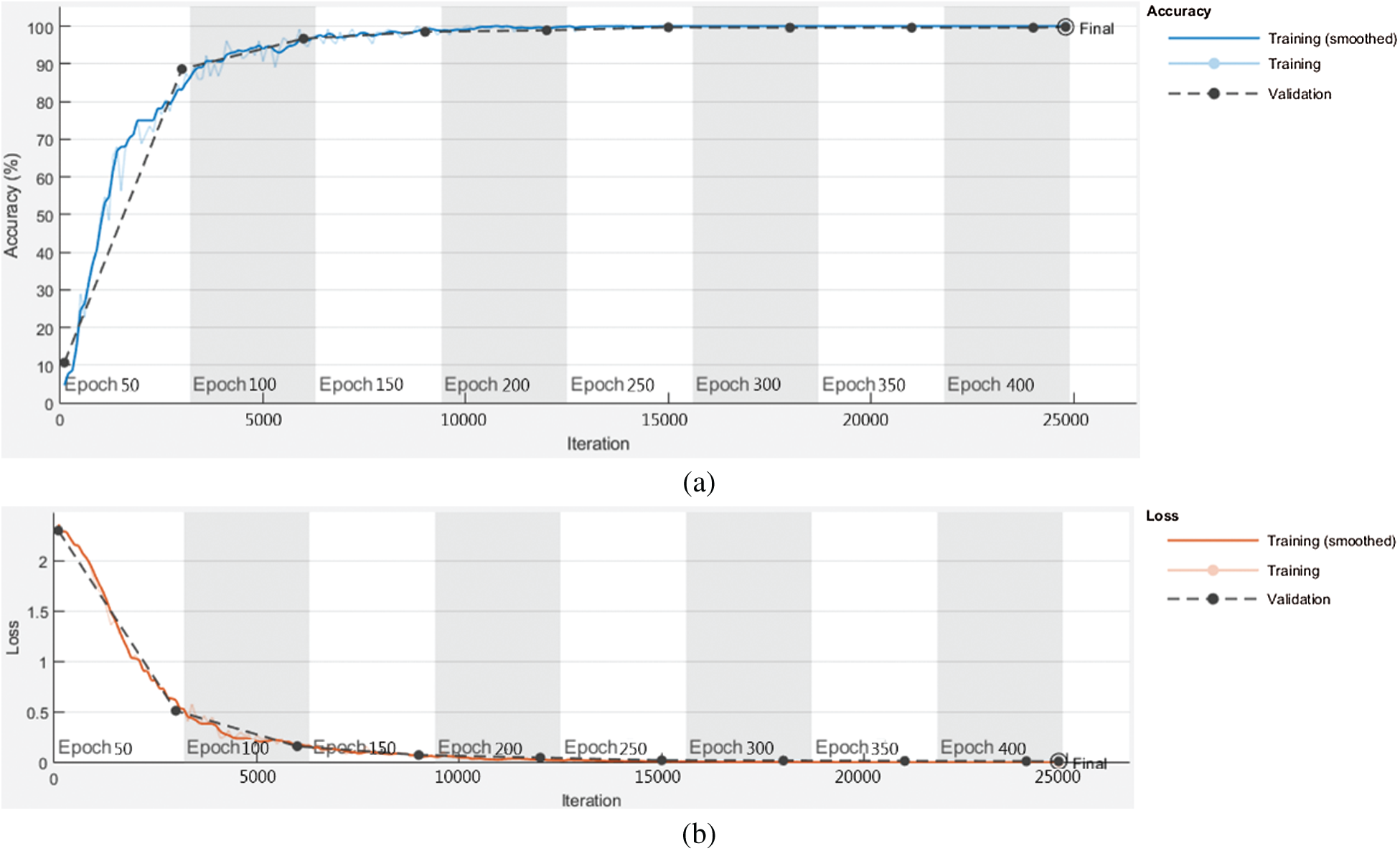 Figure 5: The curve of accuracy and loss with the number of iterations. (a) Accuracy (b) loss value

An improved network model of YOLOv3 is proposed, which backbone network is constructed by combining the dense connection network with the deep residual network. The improved network is utilized to realize real-time recognition and location of indoor scene objects combined with RGB-D camera. Experiment results proved that the detection and recognition accuracy and real-time performance by the new network are obviously improved compared with the previous YOLOV3 neural network model in the same scene. More objects can be detected which cannot be detected with the YOLOv3 network before the improvement. The running time of objects detection and recognition is reduced to less than half of the original. This improved network has a certain reference value for practical engineering application.

Acknowledgement: The authors would like to thank the anonymous reviewers and the editor for the very instructive suggestions that led to the much-improved quality of this paper.

Funding Statement: This work was supported by Henan Province Science and Technology Project under Grant No. 182102210065.