Abstract: This research implements a random dot kinematogram (RDK) using virtual reality (VR) and analyzes the results based on normal subjects. Visual motion perception is one of visual functions localized to a specific cortical area, the human motion perception area (human analogue for the middle temporal/middle superior temporal area) located in the parieto–occipito–temporal junction of the human brain. The RDK measures visual motion perception capabilities. The stimuli in conventional RDK methods are presented using a monitor screen, so these devices require a spacious dark room for installation and use. Recently, VR technology has been implemented in different medical domains. The test method proposed in this study include a VR-based RDK that can independently measure human motion perception abilities without any spatial constraints via a VR head-mounted display. Subsequently, the VR-based RDK was implemented, and the visual perception abilities of the normal subjects were measured based on varying coherences. In both screen- and VR-based RDK tests, the easier the stimulus is, the higher the correct answer rate and the shorter the reaction time. No significant differences in coherence thresholds were observed between the two test methods. The VR-based RDK proposed in this study can be used as a diagnosis tool for visual motion perception and neurodegenerative disorders affecting the posterior region of the brain.

Random dot kinematogram (RDK) test sets a coherence value among random dots displayed on a screen, where the designated dots move in a specific direction defined by the ratio and the remaining dots move randomly as noise [1]. The RDK test is effective for measuring visual motion perception in spatiotemporal dimensions. However, as the conventional RDK is measured by displaying the moving dots on a screen, certain spatial and environmental constraints require control over the surrounding environment, such as the size of the screen, the viewing distance between the test subject and screen, and the overall brightness of the laboratory environment.

Thus, we propose a virtual reality (VR)-based RDK in this study to overcome these limitations. As the VR-based RDK can control various measurement conditions such as screen size, field of view, and dark-room environment composition using VR technology, the visual perception ability can be measured in specific to the individual body shape and unique viewing angle of the subject. In addition, the effectiveness of the VR-based RDK was validated by conducting a comparative experiment with screen-based RDK. Therefore, this study demonstrated that the proposed VR-based RDK could conveniently test the visual motion perception without space constraints, and the coherence threshold remained unvaried from the conventional screen-based RDK in normal subjects.

In RDK tests, a certain percentage of dots are designated as signal dots that display unified motion in a single coherent direction, and the remaining percentage of dots are regarded as noise dots moving in random directions, as depicted in Fig. 1. The ratio of the number of signal-to-noise dots is defined as the coherence. The direction of the signal dots and coherence were randomly presented to the subjects, who were required to enter the direction of the perceived global motion. A correct response was recorded when the subject identified the same direction as that in the stimulus. Overall, the main objective of this test was to measure the subjects’ perception of visual motion that is primarily conducted at the human motion perception area (human analogue for the middle temporal/middle superior temporal area, hMT+) located in the parieto–occipito–temporal junction of the human brain [2–6]. In particular, extensive damage to the bilateral posterior cortical area causes complete loss of visual motion perception, which is a clinical syndrome called akinetopsia [7–11]. In less severe instances, impaired visual motion perception is evident in diseases with posterior cortical dysfunction, such as the Alzheimer’s disease [12,13], Parkinson’s disease [14], and autism spectrum disorders [15]. Therefore, the visual motion perception measured using the RDK can be applied to various clinical situations that may assist in the early diagnosis of neurodegenerative diseases.

VR is a simulation technology that can realize and provide the experience of a real world via a computer-generated virtual world. Recently, various hardware technologies have been developed for introducing VR environments in several diverse applications. As the display is the most important element of a VR system, various types of display hardware have been developed for practical use. The latest development of display hardware for VR is the head-mounted display (HMD), which blocks the outside view to induce a sense of virtual immersion. Based on the user’s movement, the HMD device seamlessly tracks the current position and orientation to continually produce the virtual world and immerse the user’s entire field of view [16].

Conventional computer-based applications allow the users to interact with the environment using a keyboard and mouse, but the HMD-based VR applications employ user-friendly controllers such as remote controls, sensor gloves, and treadmills [17]. Therefore, numerous currently implemented VR applications use HMDs for highly enhancing the user experience in the virtual environment with striking similarities to the real world [18]. Recent research has confirmed the possibility of utilizing VR as an alternative route for medical intervention and delivery. In particular, VR related technology has is used as a technology for assisting the diagnosis and rehabilitation of stroke, cerebral palsy, severe burns, and Parkinson’s disease. The VR is advantageous as a medical tool as it saves space and provides real-time feedback in a convenient interface to ensure safe practice and training environment. In addition, VR extends the ability to customize treatment requirements including the improved ability to coordinate assessment and training procedures [19].

3  Design and Implementation of VR-Based RDK

The screen-based RDK was simultaneously implemented in the Unity 2019.2.9.1f environment to confirm the applicability and suitability of the VR-based RDK; the hardware specifications of each RDK are listed in Tab. 1. 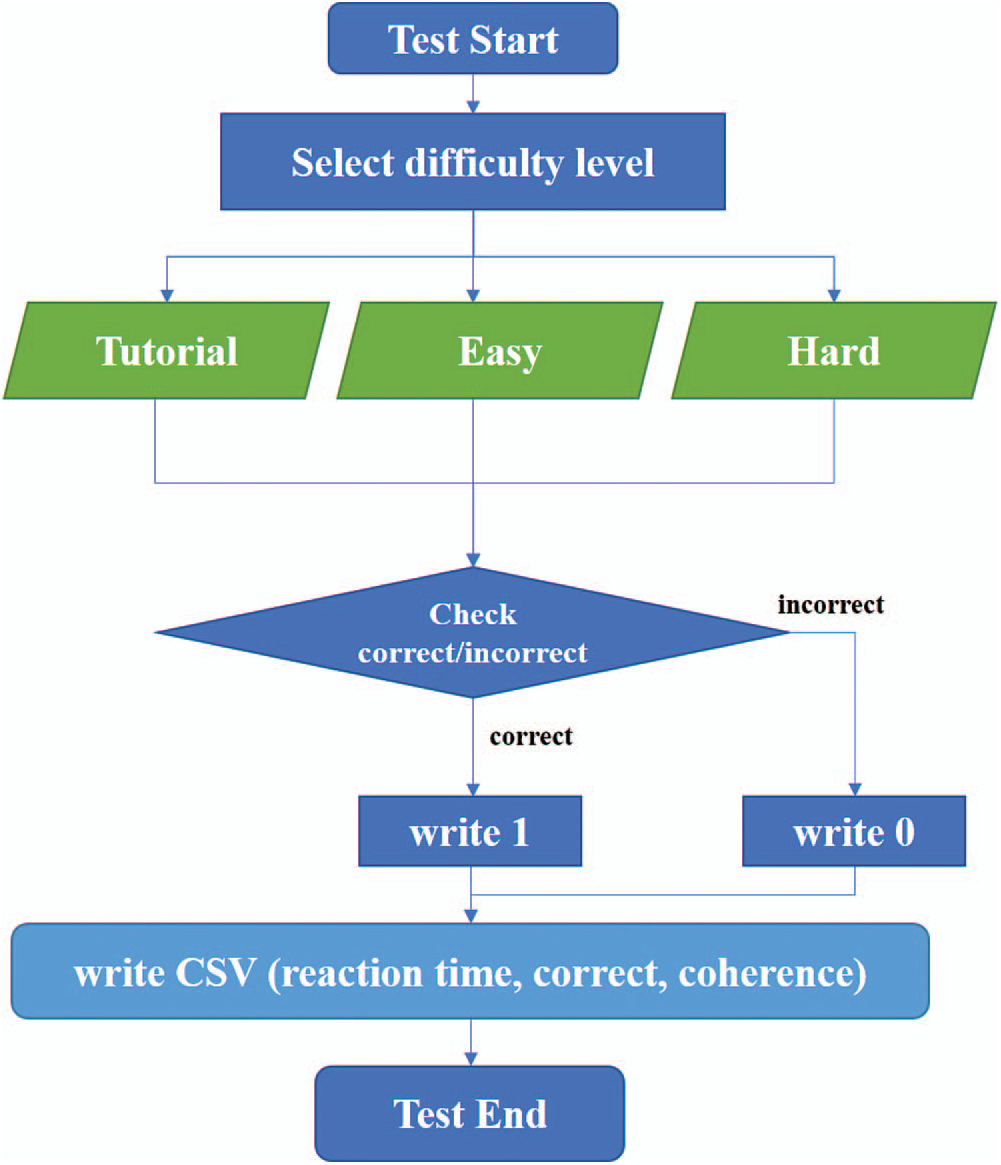 A detailed flow chart of the VR-based RDK is presented in Fig. 3. Subjects first perform the tutorial task, and afterwards, easy and difficult stimuli are presented in order. Difficulty levels are determined by the coherence ratio of the signal dots: 100% or 90% for tutorial level, 70%, 60%, 50%, or 40% for easy level, and 30%, 25%, 20%, or 15% for the hard level move in the same direction. Each VR-based RDK was repeated 10 instances for a particular subject, and the entire data were automatically saved in a .csv file as the subject’s entry was completed.

All the experiments followed the tenets of the Declaration of Helsinki, and the study was approved by the Institutional Review Board of Seoul National University Bundang Hospital (B-2008/633-303). We recruited 20 normal subjects over 18 years of age; each subject provided a written informed consent to participate in the current study under the following inclusion criteria: 1) subjects without a history of dizziness, neurological disorders, eye movement disorders, or ophthalmic diseases; 2) subjects without a history of neuromuscular or musculoskeletal disorders that may significantly interfere with button operation using fingers; 3) subjects with normal cognitive function (score on the Korean version of Mini-Mental State Examination 24), 4) subjects without a history of misuse of drugs or psychotropic drugs, and 5) subjects who fully understood the contents of the clinical research and agreed to participate. Thereafter, the RDK scores obtained from the screen-and VR-based RDK experimental tests were compared for the 20 normal subjects.

Tab. 2 presents detailed information on the 20 subjects (mean age: 33.6), including 7 men and 13 women, who were randomly assigned for testing with the VR or the screen first.

At the tutorial level, which is relatively easy, a coherence of 100% and 90% was conducted four times for each direction (left: “ −”, right: “+”) of the moving dot to induce adaptation toward the operation of the VR-based RDK for the test subjects. Subsequently, the test was performed 10 times by randomly adjusting the coherence ratio to 70%, 60%, 50%, and 40% for the easy level, and thereafter, 30%, 25%, 20%, and 15% for the hard level. The average value of the correct score and reaction for each of the 10 tests were calculated and recorded in the VR-based RDK system. Regardless of the global motion acting in the left or right direction, the subject’s correct response rate increased and the reaction time decreased for a larger coherence (easier stimulation). This trend was consistently observed for both the screen and VR stimulation, as depicted in Figs. 5 and 6. 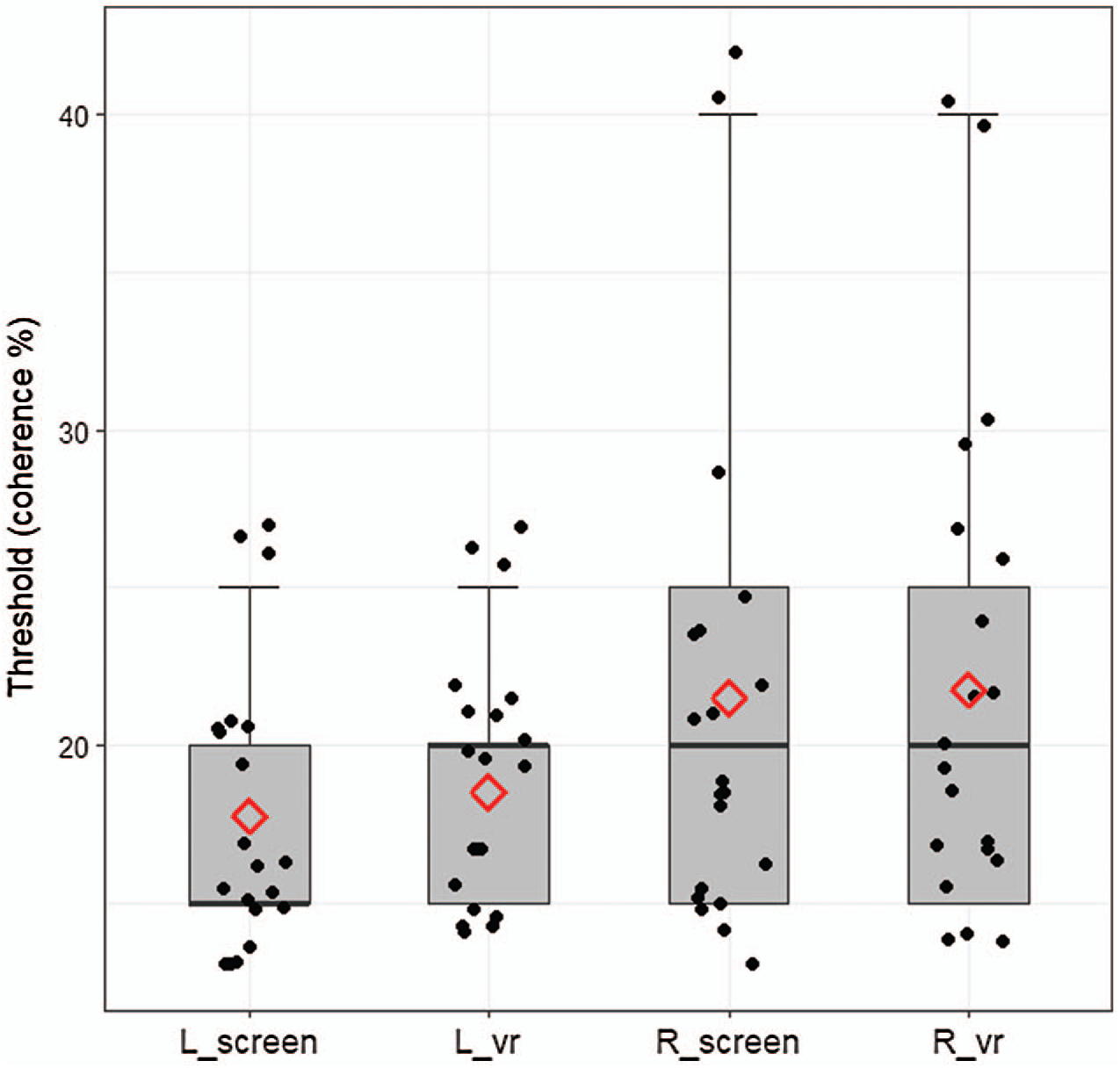 In this study, we designed and implemented a VR-based RDK that measured visual motion perception ability using a VR HMD with Unity engine. Unlike the screen-based RDK that operates on a monitor screen, the VR-based RDK is advantageous of being relatively independent of the space constraints. In addition, it provides an excellent environment with an enhanced sense of immersion for the test subjects. Moreover, the VR-based RDK is suitable for testing under various assigned conditions (inducing changes in the subject’s posture and varying environmental factors), and the examiner can conveniently review the subject’s response and test results in real time. However, the application of VR on patients under certain conditions (children, disabled personnel, novel users) could be challenging owing to the nature of VR. This VR-based RDK was designed and implemented under testing conditions for adults and the elderly, and its upgradation based on suitability for various ages and conditions is planned for future research. An additional advantage of VR-based RDKs is that the Unity engine is highly compatible with VR HMDs and can be readily applied to various VR hardware devices as well as operating systems. Moreover, future improvement and testing will be conducted to include various environments and locations for the subjects. Furthermore, the present research team will develop a new version of the RDK based on the current VR-based RDK by incorporating new motion variants for the dot objects in the existing RDK tests.