Design and Implementation of T-Shaped Planar Antenna for MIMO Applications

Abstract: This paper proposes, demonstrates, and describes a basic T-shaped Multi-Input and Multi-Output (MIMO) antenna with a resonant frequency of 3.1 to 10.6 GHz. Compared with the U-shaped antenna, the mutual coupling is minimized by using a T-shaped patch antenna. The T-shaped patch antenna shapes filter properties are tested to achieve separation over the 3.1 to 10.6 GHz frequency range. The parametric analysis, including width, duration, and spacing, is designed in the MIMO applications for good isolation. On the FR4 substratum, the configuration of MIMO is simulated. The appropriate dielectric material ɛr = 4.4 is introduced using this contribution and application array feature of the MIMO systems. In this paper, FR4 is used due to its high dielectric strength and low cost. For 3.1 to 10.6 GHz and 3SRR, T-shaped patch antennas are used in the field to increase bandwidth. The suggested T-shaped MIMO antenna is calculated according to the HFSS 13.0 program simulation performances. The antenna suggested is, therefore, a successful WLAN candidate.

Multiple Input and Multiple Output (MIMO) devices can send and receive simultaneous signaling at the same power level and maximize high data rate demands in modern communication systems. This is because the MIMO mechanism will increase the channel’s capability at both sides without increasing transmitting power. MIMO devices have considerable interest in improving stability and power on the platform of wireless mobile communications.

In compact MIMO antenna architecture, one crucial consideration is to minimize associations between certain elements, particularly the interconnections between various elements and the electromagnetic interactions [1]. When the radio contact includes more than one antenna, this is known as (MIMO) [2]. MIMO can be used for both channel robustness and channel efficiency enhancements.

To ultimately gain from MIMO [3], it is essential to use channel coding for distinguishing information from various channels. Several types of MIMO can be used from SISO, like SIMO and MISO, to complete the MIMO system. This requires processing but gives additional channel robs/data throughput capacity. These all can increase efficiency significantly, but usually at the disadvantage of the extra processing and the number of antennas used [4]. When selecting the correct alternative, performance balances against costs, available capacity, and the resulting battery life have to be accomplished. Shannon’s law determines the highest rate at which erroneous data may be transported in the presence of noise over a given bandwidth.

Although some changes can be made to simplify the modulation system and increase the signal-to-noise ratio, these changes are not necessarily straightforward or inexpensive, and they often represent a compromise to accommodate the different factors involved. Therefore, more ways to enhance the data output on various networks are required [5]. MIMO is one way to improve wireless networking and is thus of great importance. The fact that MIMO can provide additional storage capacity is one of the main benefits of spatial multiplexing. This is achieved by spatial multiplexing by using multiple paths as external channels for data transfer. The overall volume of data accessible on radio channels is constrained by the physical limitations established by Shannon’s law.

Ultra-wideband is a wireless technology that requires deficient energy levels for fast, high-frequency communications across most radio spectrums. UWB has conventional non-cooperative visualization capabilities. UWB typically applies to an indicator or device with a limited relative bandwidth exceeding 20% or an absolute range exceeding 500 MHz. As the applications of UWB MIMO antenna supports for long range communication with low transmission power this band can be utilized, that in-turn applicable for Internet of Things (IoT). A study and order of 14th February 2002 utilizing the Federal Communications Commission authorize unlicensed utilization of the UWB at 3.1–10.6 GHz. This is projected to offer a competent utilization of scarce radio bandwidth whereas enabling both the high rate of Personal Area Network (PAN) wireless connectivity data and long-range applications of low data rate in addition to imaging and radar systems.

The general concept of a single-link contact device is seen in Fig. 1. It consists of three main contact components: a transmitter, channel, and receiver. The transmitter input information is the message to be transmitted to the destination from the source. The transmitter’s essential function is to relay the message to the channel via an antenna. An antenna is a way to radiate (send antenna) or receive (absorb antenna) radio waves. Data modulation is the systematic modification of the carrier signal’s characteristics as amplitude, phase, or frequency by message signal. (a) ease of transmission, (b) minimize noise and interference, and (c) relay multiple signals over a single channel can be used to modulate a message using a sender. It is amplified through a power amplifier before transmitting the signal out of the transmission antenna. The channel is the mechanism used to meet the destination or source of the transmitting data. When the data is transmitted through the channel, other undesirable results are seen. For example, it absorbs the noise from the local environment, and since the signal reflects and responds from different barriers to the signal line, the signal sent by the transmitter is emitted in various forms, also known as multi-track, at various times. Even the transmitter signal may be entirely obscured or blacked out by barriers. The recipient’s job is to remove the requested message from the received signal. 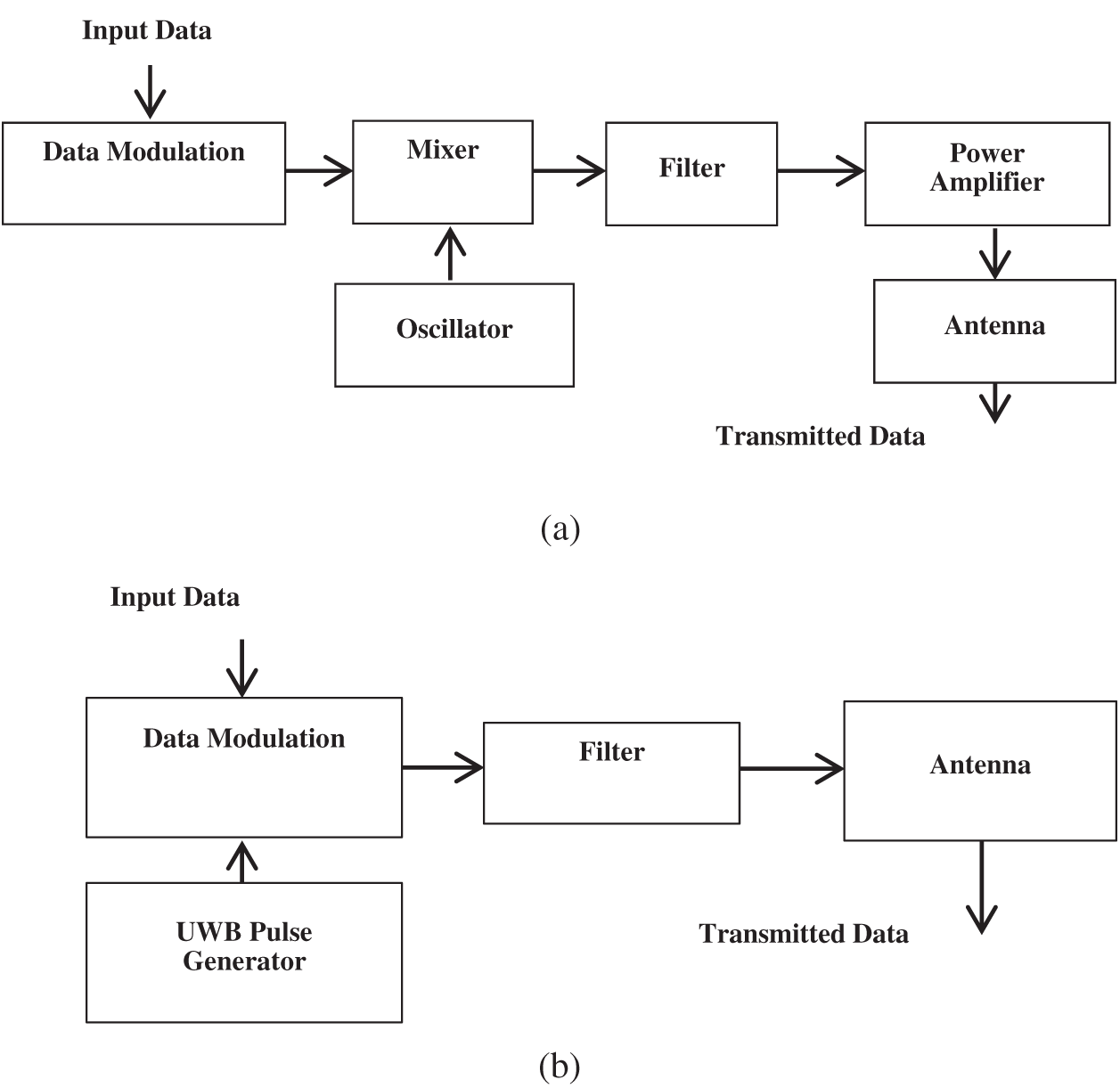 UWB communication differs radically from all other communication methods because the pulses produced by a UWB pulse generator are used to communicate between transmitters and recipients by extremely narrow RF pulses. The use of a short-term pulse as the contact blocks directly produces an extensive bandwidth, as the interpretation of the Fourier frequency domain is based on the assumption that a minimal signal in a time domain provides a comprehensive spectrum signal. An important distinction between standard radio transmissions and UWB radio transmissions is the standard transmissions relay information by separate energy/frequency/phase modulation of the sinusoidal wave. UWB transmissions can relay data by producing radio power at particular times and taking up broad bandwidths, allowing pulse or time modulation. Details on UWB signals may also be transmitted (modulated) by encoding pulse polarity and pulse amplitude/orthogonal pulses. UWB pulses can be emitted sporadically to support time-position modulation at comparatively lower pulse frequencies and be emitted at rates up to the opposite of the UWB pulse spectrum. At channels pulse rates above 1.3 Gps, pulse-UWB systems assisted forward error correction encoded data rates above 675 Mbps were demonstrated. UWB communication is carriers accessible, such that data, as in the case of narrowband and broadband systems, are not modulated in a continuous waveform with a particular carrier frequency.

This section discusses the Two T-shaped planar antennae for the operation of the MIMO design technique in detail. In Fig. 2, the planned flexible textile antenna is shown. 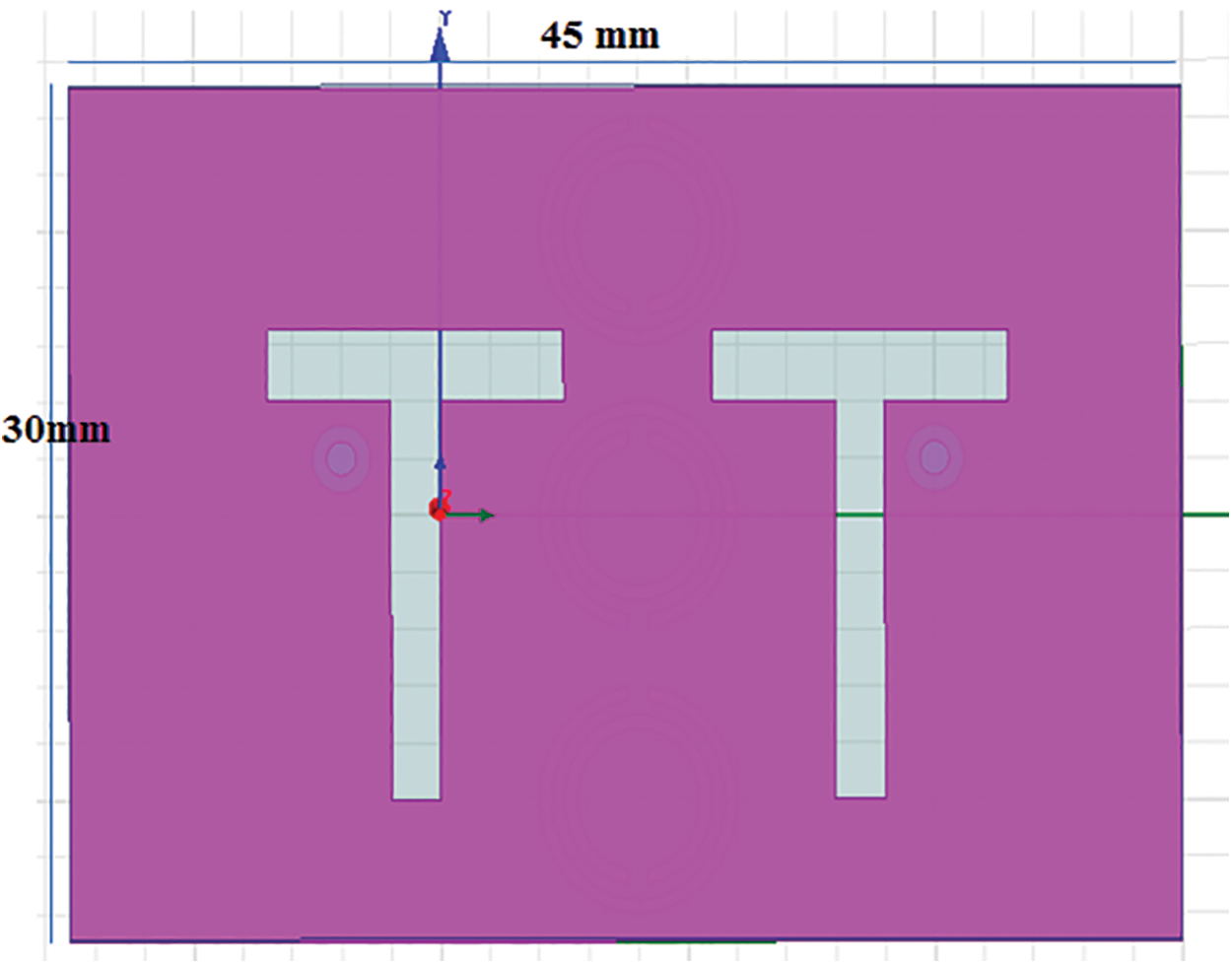 The Federal communications authorize UWB communications between 3.1 and 10.6 GHz. Then the center frequency is calculated by using the formula value as 5.7 GHz. To minimize the antenna size, the effect on antenna efficiency of different parameters is noted first, and no particular parameter is found to affect just one antenna character. The antenna resonance frequency varies considerably due to the reduction in size and the feedback leakage bandwidth reduces. Also, it no longer displays an omnidirectional radiation pattern. The patch, in this case, is similar to a capacitive load, which may reduce the antenna’s resonance frequency. Consequently, a significant size reduction can be accomplished without altering the radiation pattern by accurately selecting the patch’s dimension. The Ansoft HFSS is used to direct the development and antenna geometry is to minimize experimental cut-and-trying process cycles. For MIMO applications on impedances and radiation patterns of the array, the T-shaped antenna array is planned.

When several antennas are mounted with space less than λ/2, the radiation efficiency of antenna and channel capability is often severely degraded by reciprocal coupling. To further separate the MIMO antenna, the lower and the top bands are fitted with an inverted T-slot and a revolving resonant line extension. The feed lines then comprise two T-slits, which achieve greater impedance. A high isolation MIMO dual-band antenna with improved bandwidth for WLAN will finally be acquired using the Split Ring Resonator (SRR) in the ground plane. Here, the operating frequency was taken between 3.1 and 10.6 GHz for analysis Eq. (1) :

where W is the width of the patch, esonance frequency, v is the signal speed, Eq. (2)

where is the substrate dielectric constant, Eq. (4)

where is the process of length adjustment, Eq. (6)

Where is the substrate dielectric constant, Eqs. (7) and (8)

The parameter of the suggested antenna is depicted below.

The performance of Two T-shaped planar antennae depends significantly on the feed point location, which can be located at the as shown in Fig. 3. Where is the direction of the source point on the X and Y. Simulation was carried out by taking values along the x-axis and y-axis to find the optimal feeding point relevant to better output of two T-shaped planar antennas. The theoretical feeding point position is calculated using parameter values described in Tab. 2, where the theoretical values and the axis (X, Y) are to be determined. This analysis was made by taking a few above and below positions. Best results could be achieved on the X and Y by relating the loss of return attained, VSWR, directivity, cost, performance, on the whole, radiation pattern, etc. 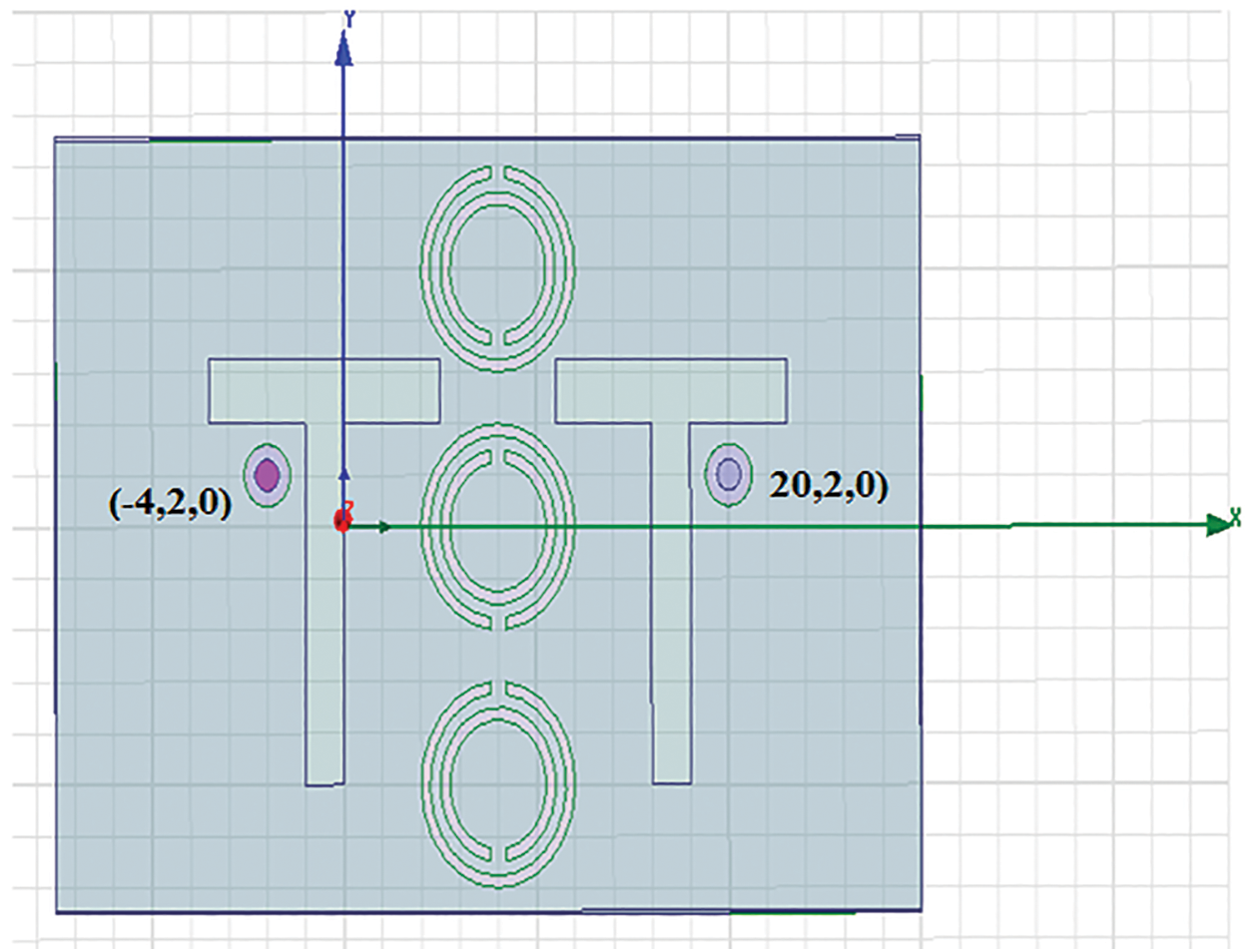 The simulation and optimization were carried out with a T-shape microstrip antenna’s configuration with an operating frequency of between 3.1 and 10.6 MHz. Then, the circular metamaterial 3-SRR was applied to the antenna base to expand its bandwidth, as shown in Fig. 4.

The projected configuration of planar two T-shaped MIMO antennas with 3-circular SRR is shown in Fig. 5 in the 3-D model. The compression is rendered with co-axial feed for these two T-shaped antennas.

In this step, initial simultaneous use of the measurements of the T-shaped antenna was carried out. Such optimization was again carried out to achieve the final simulation’s effects, including optimizing the number of three circular SRR metamaterial on the ground level, where three SRR metamaterials were applied to the final antenna configuration.

Fig. 6 displays the return loss results of antenna simulation after optimization. It is shown that a return loss of less than −10 dB can be obtained during the simulation.

It is determined using a particular frequency spectrum that the voltage signal to noise ratio gives power capabilities. Fig. 7 clearly outlines the examination of VSWR.

Figure 8: The radiation pattern of the suggested model

Fig. 9 shows that there is a gain of 1.92 dB on an antenna of four three-strand metamaterials. In the meantime, Figs. 8 and 9 demonstrate the antenna radiation model of 3-SRR simulation metamaterials.

The Envelope Correlation Coefficient (ECC) is another significant parameter of the MIMO antennas. An ECC can be used to test the complexity of a MIMO scheme. ECC = 0 means the antennas are decoupled completely, as ECC = 1 means they are short-circuited essentially (Fig. 10). Here, the ECC value seems to be 0.00185, making it decoupled.

By adjusting the feed point settings, the output of a planar T-shaped antenna is controlled. The return loss, VSWR, and radiation pattern were measured at each feeding point location. It is exposed that the feed point position selection by reducing the optimal return loss and other restraining aspects will significantly increase the gain, directivity, and effectiveness of an antenna patch. In this part of the research work, the UWB band could be achieved using three circular type SRR in the ground plane. In future, this work can be further extended by enhancing the bandwidth by means of varying the shape and materials used.