PBOAs are designed based on simulation of various natural phenomena, behavior of living organisms, physical laws, genetic sciences, rules of the games, and so on. In a general classification based on the design idea, PBOAs are categorized into 4 groups: swarm-based, physics-based, evolutionary-based, and game-based optimization algorithms.

Evolutionary-based optimization algorithms are inspired by genetics and inheritance laws. Genetic Algorithm (GA) is the most famous algorithm in this group, which is designed based on simulation of reproduction process and Darwin’s theory of evolution by natural selection [58]. Artificial Immune System (AIS) inspired by the mechanism of the human body and the human immune system against viruses and microbes is another evolutionary-based optimization algorithm [59]. Some other evolutionary-based optimization techniques are: Evolutionary Programming (EP) [60], Cultural Algorithm [61], Evolution Strategy (ES) [62], Differential Evolution (DE) [63], Biogeography-Based Optimizer (BBO) [64], Artificial Infectious Disease (AID) [65], Genetic Programming (GP) [66], and Improved Quantum-inspired Differential Evolution (IQDE) algorithm [67].

In this paper, a new optimization algorithm entitled All Members-Based Optimizer (AMBO) is designed to provide suitable quasi-optimal solutions for various optimization problems. In the proposed AMBO, all members of the population, regardless of their position in the search space, participate in updating the population matrix. Various steps of implementing AMBO are explained and then its mathematical formulation is presented. The performance of AMBO in providing quasi-optimal solution is evaluated for twenty-three standard objective functions of different types.

The rest of the article is organized as follows. In Section 2, the proposed AMBO algorithm is described and modeled. In Section 3, the proposed algorithm is simulated for optimizing different objective functions and the results are presented. Statistical analysis of the results is carried out in Section 4. Finally, the conclusions of this investigation and suggestions for future studies are presented in Section 5.

In AMBO, the population matrix is represented using Eq. (1).

In the proposed AMBO algorithm, population members are updated in two stages. In the first stage, each member of the population is updated based on the position of different members of the population in the search space. The important point in this process is that the new position is acceptable to a population member if it improves the value of the objective function. Otherwise, the update is not acceptable and the member remains in its previous position. The first stage is simulated using Eqs. (3) to (5).

where is the number of selected members to lead the population members, t denotes the algorithm replication counter, T is the maximum replication of the algorithm, is the new value for dth problem variable, r is a random number in the interval , is the new position of ith population member based on the first stage, and is its objective function value.

In the second stage, the population matrix is updated based on the best member. In this stage, similar to the first stage, the new position is acceptable to a population member if it improves the objective function. The second stage of AMBO is simulated in Eqs. (6) and (7). 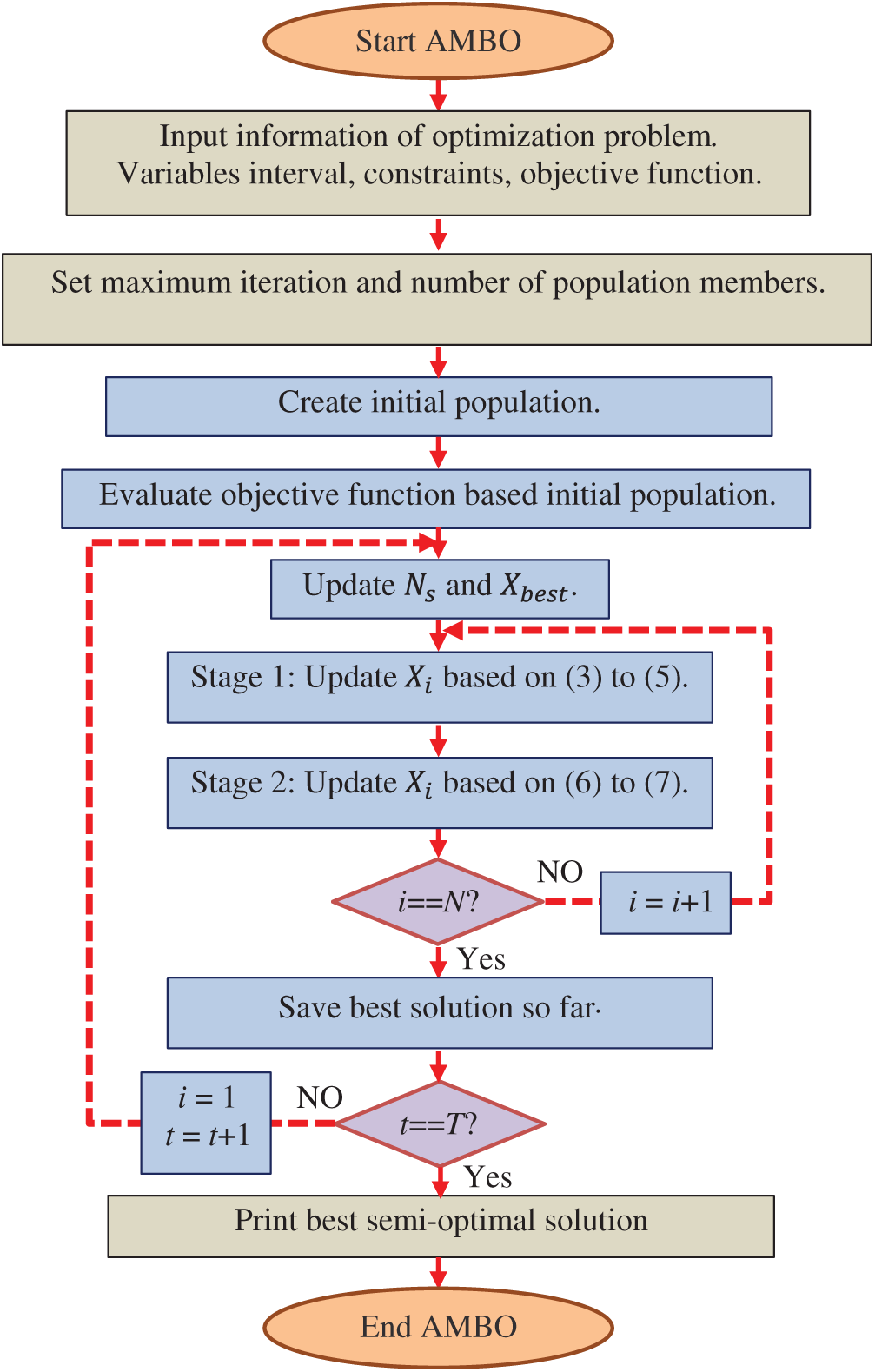 In this section, the ability of AMBO for solving optimization problems and providing quasi-optimal solutions is evaluated. For this purpose, AMBO is implemented on a set of twenty-three standard objective functions from three different types including unimodal, high-dimensional multimodal, and fixed-dimensional multimodal functions. Complete information of these objective functions is provided in the Appendix (Tabs. A1 to A3).

The third group of objective functions, including F14 to F23, is selected from the fixed-dimensional multimodal type. The results of the implementation of the proposed algorithm and eight other optimization algorithms on these objective functions are presented in Tab. 3. The results in this table show that AMBO is the best optimizer for F15, F16, and F17 target functions. 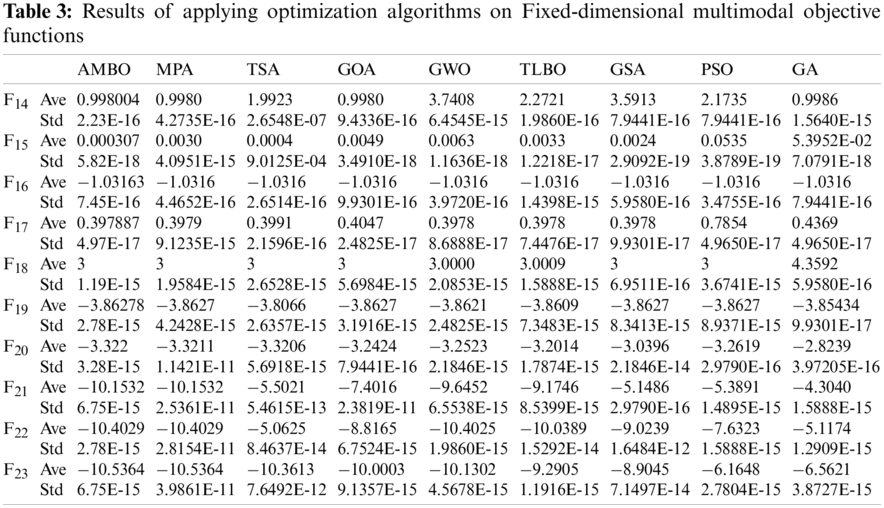 Two important indicators for evaluating the performance of the optimization algorithms in solving optimization problems are the exploitation index and the exploration index. 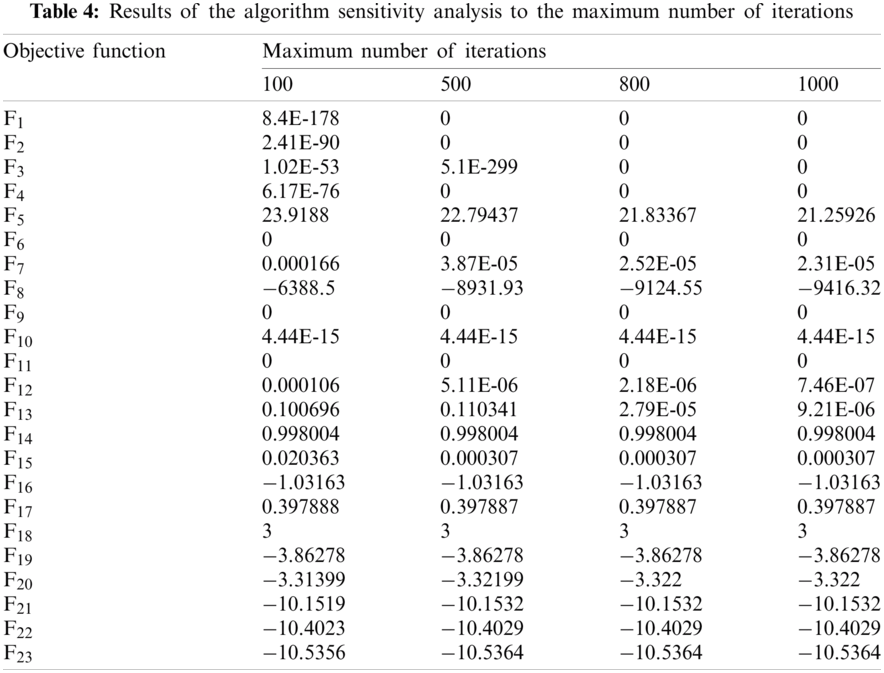 In this section, the sensitivity of the AMBO to the two parameters of maximum number of iteration and number of population members is evaluated.

Also, in order to analyze the sensitivity of the proposed algorithm to the number of population members, the AMBO has been implemented independently for different populations with number of 20, 30, 50 and 80 members. The results of this simulation for the number of different members of the population are presented in Tab. 5. It is analyzed from Tab. 5 that the value of fitness function decreases when number of search agents increases. 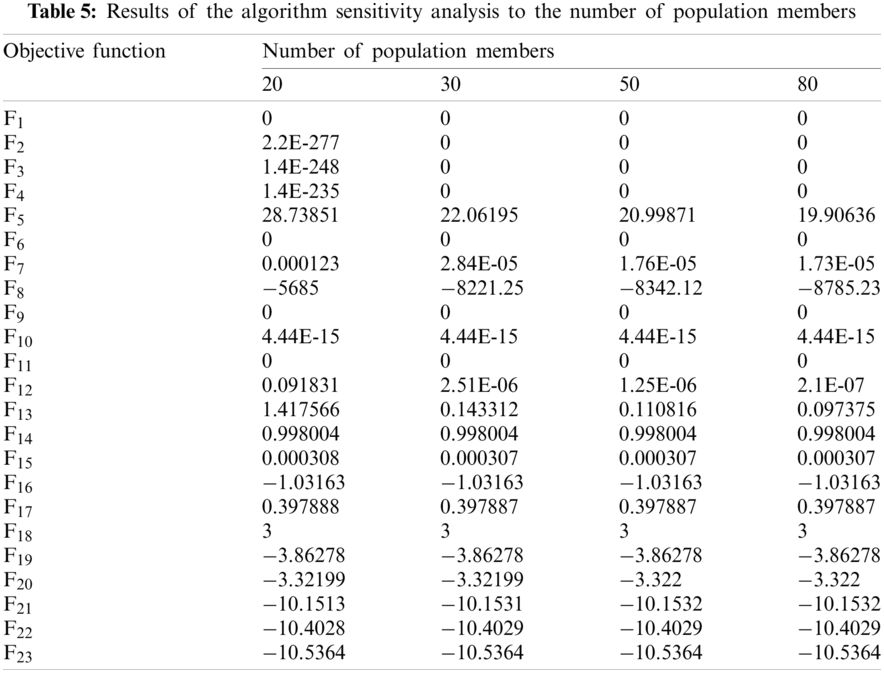 The results of optimizing the unimodal objective functions showed that AMBO is more capable than other algorithms in solving such problems and therefore, it is superior considering the exploitation index. Also, the results of optimization for multimodal objective functions showed that AMBO with high exploration power is able to provide suitable quasi-optimal solutions for this type of functions. Based on the simulation results, it can be concluded that the proposed algorithm has an acceptable ability to solve various optimization problems and is superior and much more competitive than other mentioned optimization algorithms.

The authors suggest some ideas and perspectives for future studies. Design of the binary version as well as the multi-objective version of the AMBO is an interesting potential for future investigations. Apart from this, implementing AMBO on various optimization problems and real-world optimization problems can be considered as some significant contributions, as well.

Appendix A. Information of objective function

Information on the twenty-three objective functions used in the simulations is presented in Tabs. A1 to A3. 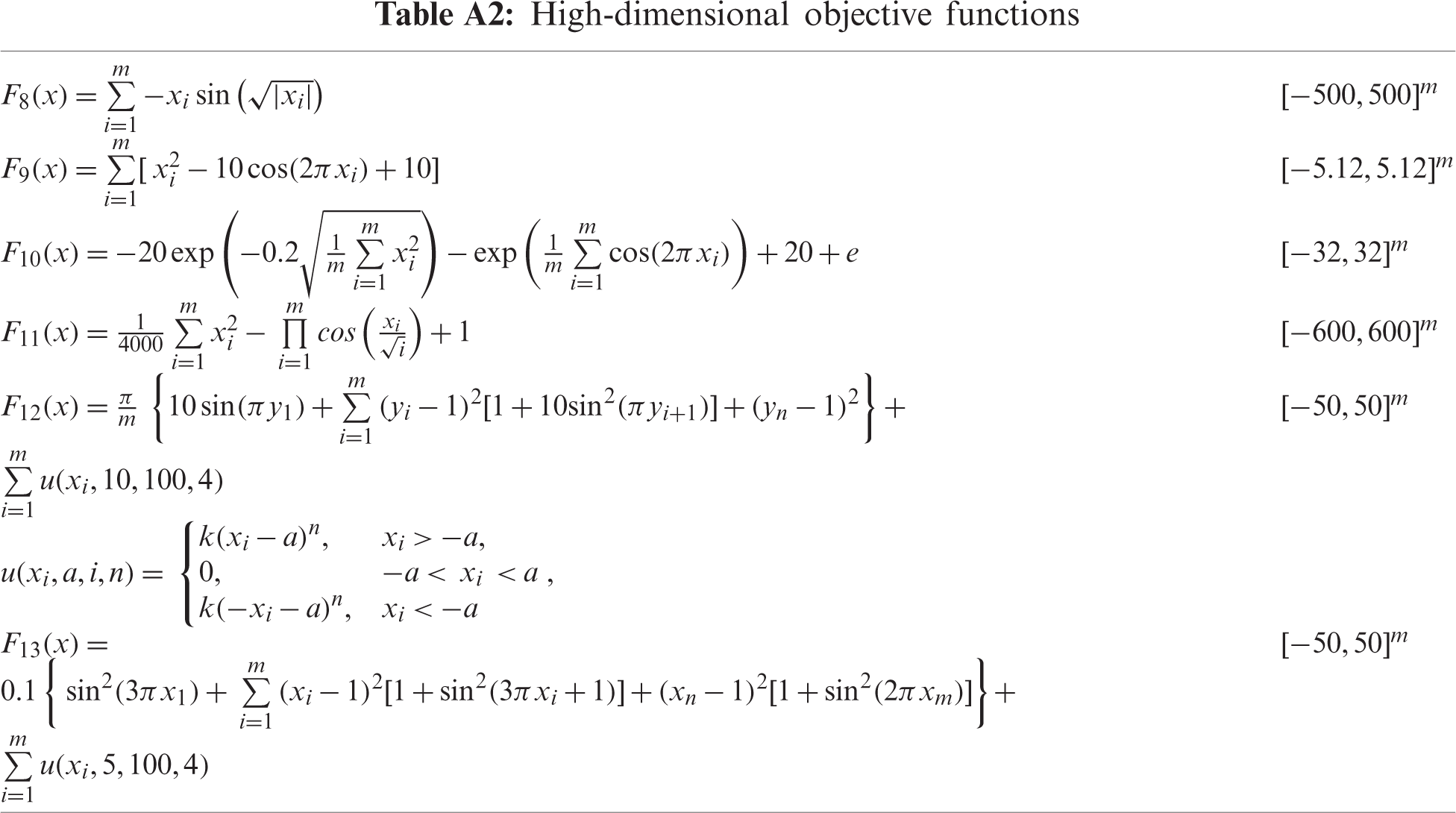 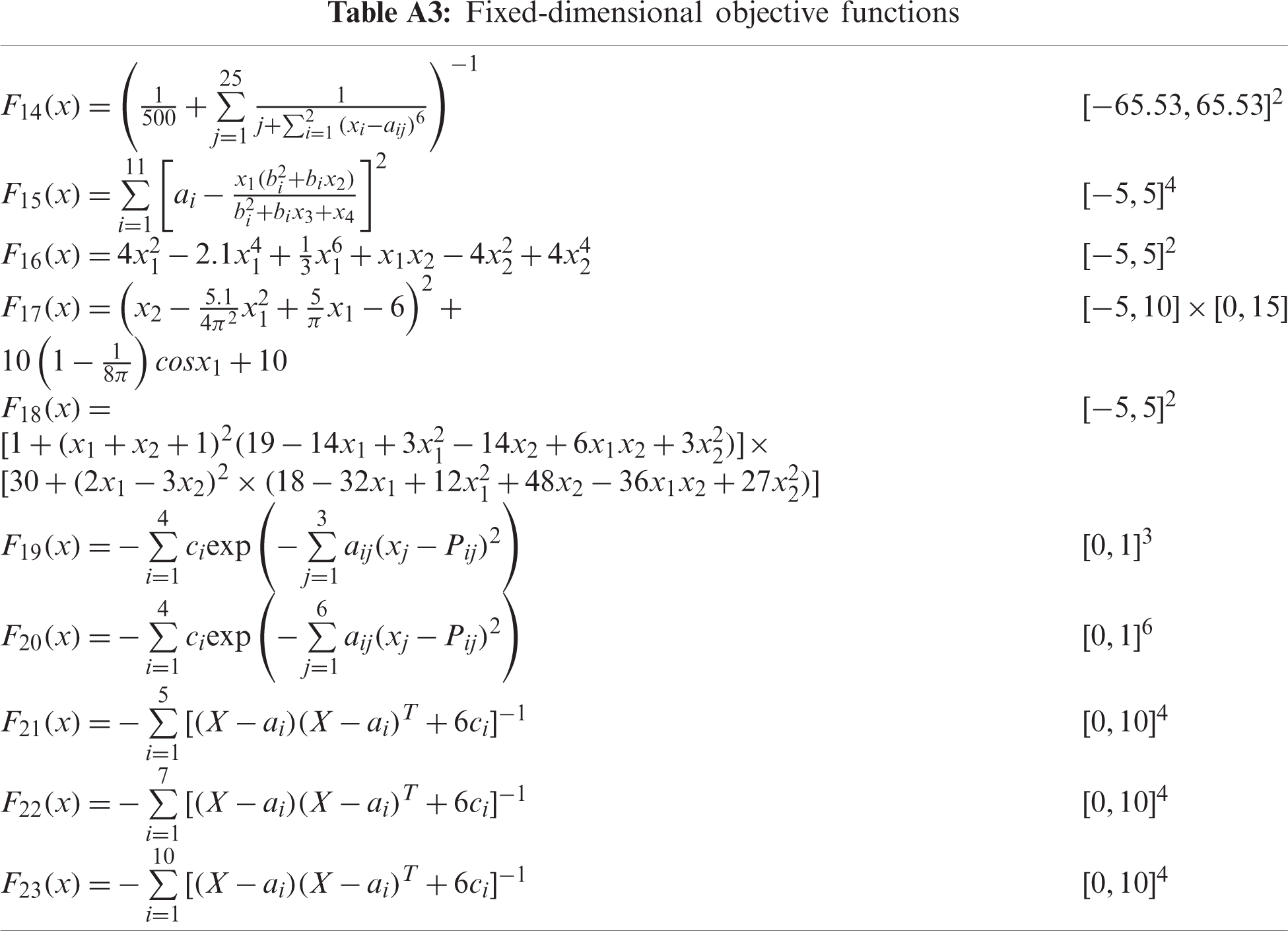