Abstract: Most interesting area is the growing demand of flying-IoT mergers with smart cities. However, aerial vehicles, especially unmanned aerial vehicles (UAVs), have limited capabilities for maintaining node energy efficiency. In order to communicate effectively, IoT is a key element for smart cities. While improving network performance, routing protocols can be deployed in flying-IoT to improve latency, packet drop rate, packet delivery, power utilization, and average-end-to-end delay. Furthermore, in literature, proposed techniques are very much complex which cannot be easily implemented in real-world applications. This issue leads to the development of lightweight energy-efficient routing in flying-IoT networks. This paper addresses the energy conservation problem in flying-IoT. This paper presents a novel approach for the internet of flying vehicles using DSDV routing. ISH-DSDV gives the notion of bellman-ford algorithm consisting of routing updates, information broadcasting, and stale method. DSDV shows optimal results in comparison with other contemporary routing protocols. Nomadic mobility model is utilized in the scenario of flying networks to check the performance of routing protocols.

A new paradigm of the Smart City model is correlated with quality of life, public security, emergency relief and other urban development resources [1]. Connectivity of aerial vehicles can only be made possible by using internet of things to reshape the concept of smart cities [2]. Due to aerial vehicles changing topological structure, measuring signal strength either indoor or open-air is a tough task. However, proposed model utilized decision tree to find out UAV’s location and improve signal power [3]. Flying vehicles may be scheduled for effective transfer of items using intelligent transportation. UAVs move in three dimensions which can be useful in agriculture, transportation, & military missions. As a result, the urgent demand for vehicle-aided computing in aerial vehicles for smart cities is introduced [4]. In general, Fig. 1 demonstrates the concept of smart cities integration with aerial vehicles. 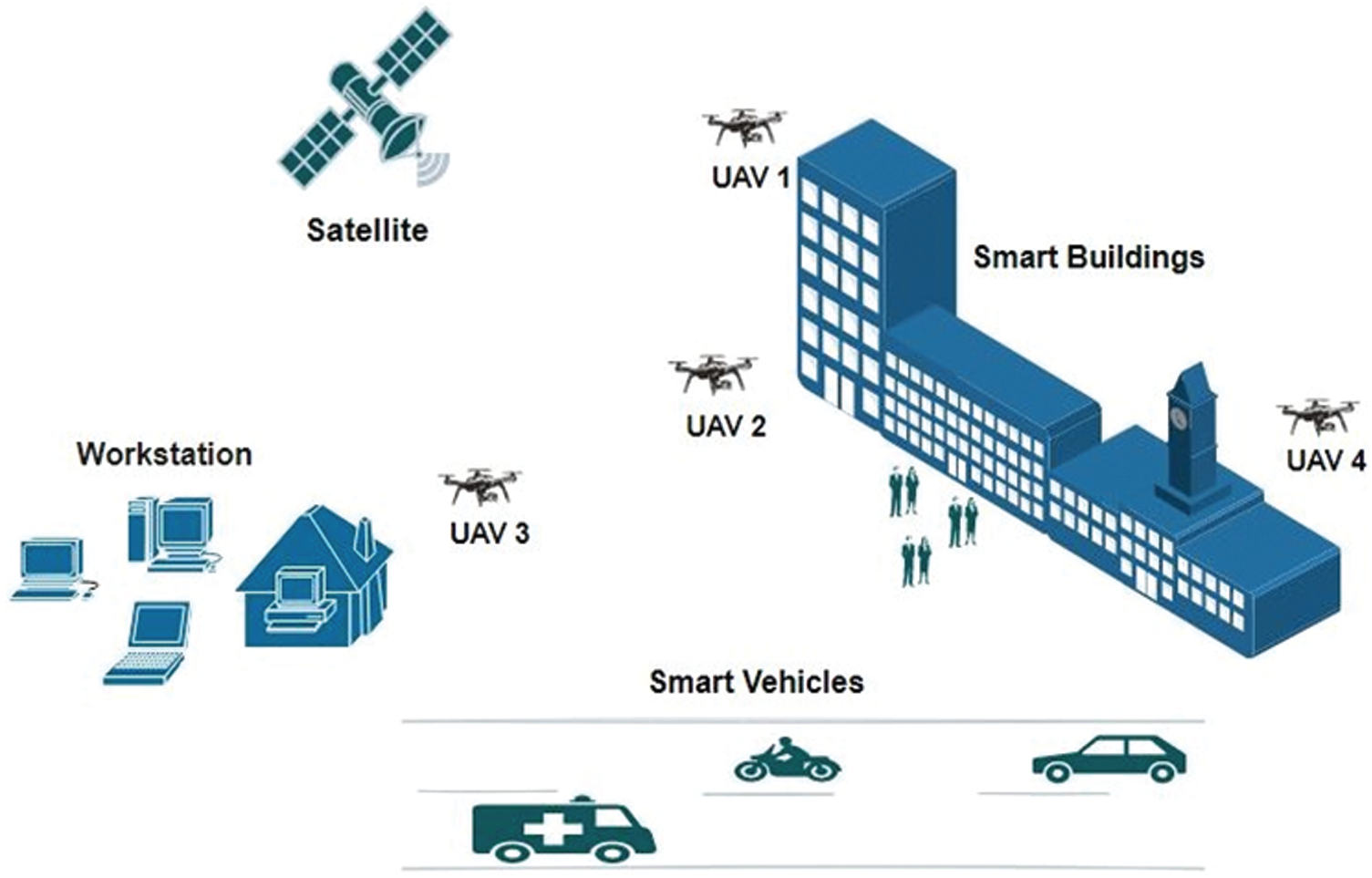 Aerial ad hoc networks require routing protocols for selecting optimal route selection. Enhance-AntHocNet routing technique is suggested to increase network lifetime. A novel parameter energy stabilizing threshold is incorporated in working of ant colony optimization to conserve UAV’s energy [5]. Flying ad hoc network (FANET) has an advantage over other areas, due to its availability, easy and fast deployment in every situation. It also enables inter- and intra-UAV networking for collaboration and cooperation among the Internet of Flying Things (IoFT) [6]. Moreover, multi-point relay (MPR) technique can be utilized to tackle duplicate data transmission of packets illustrated in Fig. 2 Since UAVs operate in swarms and exchange data in offline mode, they can compile data without access to the internet. FANETs have enhanced IoFT with no Line of Sight (LoS) issues and data sharing from very far missions. UAVs are lightweight and can move in any direction at a speed of 30–460 km/h. Due to changing network topology frequently during operation data routing from air-to-air and air-to-ground suffers. The ability to embed an effective routing protocol is a key component in the life of UAVs. Drones are categorized into two types: F-i-x-e-d- W-i-n-g (FW) and R-o-t-a-r-y-W-i-n-g (RW). Fixed-wing aerial vehicles are more capable for longer surveillance fight time with optimal aero-dynamic design and flight speed. In contrast, rotary-Wing can vertically take-off from any position and fly in much lower altitudes [7]. Tab. 1 describes the main difference between Fixed-wing and Rotary-wing. 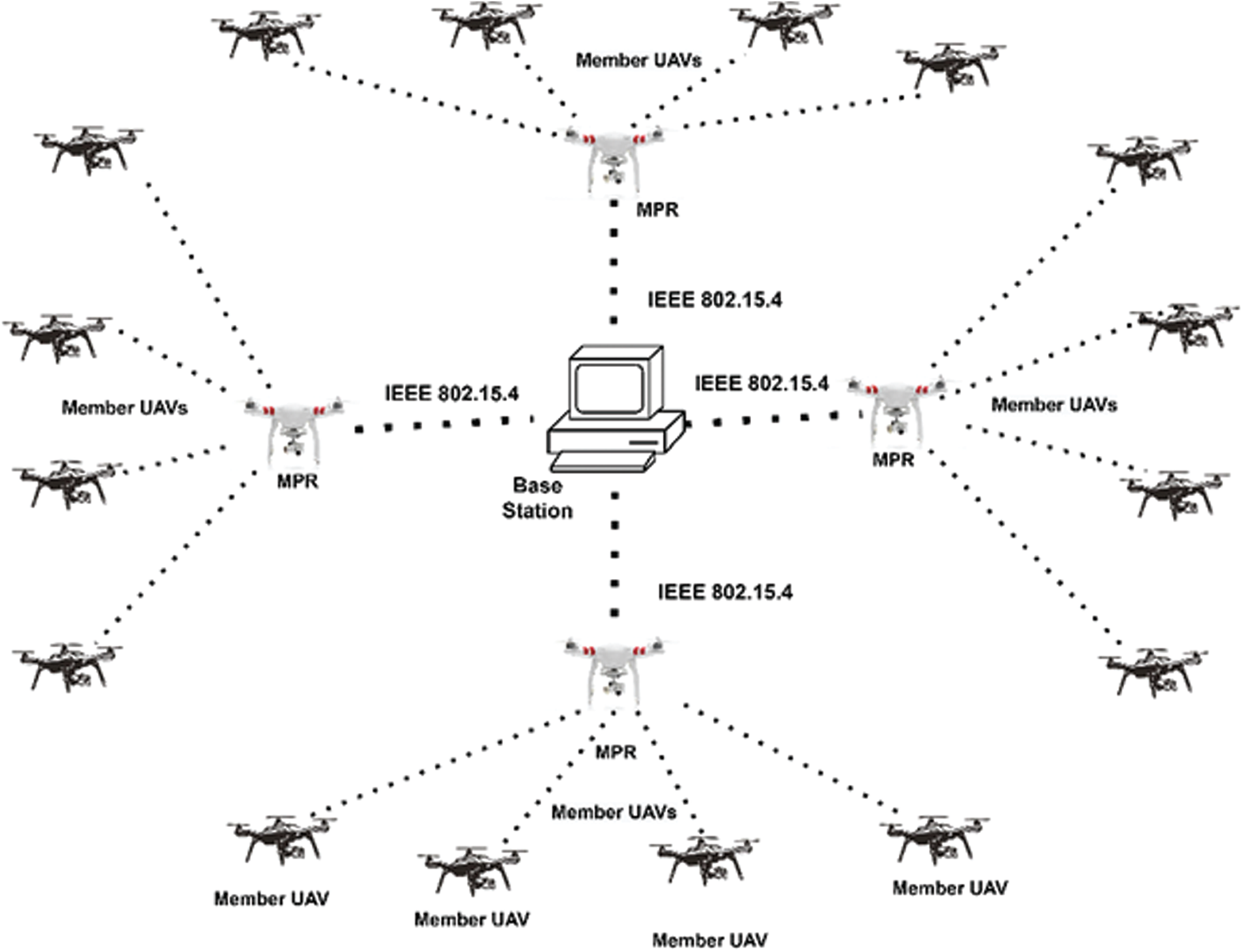 Intelligent UAVs are small in size and light-weighted with limited resources, such as band-width and storage. In the light of the above problems, the contributions of this article are as below.

•   Implementation of various routing protocols in the area of flying Ad-hoc networks.

•   Nomadic mobility model is used to enhance the capabilities of UAV’s.

The diverse nature of IoT devices gives solutions to design smart cities. In smart cities, IoT has allowed various types of devices to communicate and share information using special protocols. It also offers services to citizens and government entities. IoT-based routing protocol is introduced to strengthen various connected gadgets. The best-fit approach reinforces to repair channel links while connecting with nodes. However, the alternative opportunistic routing, which eliminates unnecessary data packets while improving transmission end-to-end delay to boost-up performance [8]. UAVs and fifth-generation (5G) IoT networks were introduced for Smart Cities. Novel hierarchical multi-UAV architecture is proposed for collaboration and trajectory problem-solving. The UAV mission control pattern distribution and swarm behaviors which address to elect cluster head. Among aerial vehicles and base stations, the use of 5G technologies helps to prevent handover problems [9]. The loss of connection breakage is caused by low-power energy nodes. As a result, an attacker will easily breach the network; thus, a robust neural technique called back propagation learning algorithm is used to protect communication in IoT-based networks [10]. Although intelligent IoT introduces multi-tier computing, which integrates Cloud, Fog, and Edge approaches [11]. However, attackers can access a complex IoT network by increasing the length of transmitted packets in order to degrade resources. An intrusion detection system is programmed to filter data packets that cause disruption [12]. Decision-making is having a special role in between aerial vehicles and IoT devices while transferring data packets. In order to mitigate packet length and balancing node energy, the Markov decision mechanism formulates a threshold that allows UAVs to transfer energy. UAV-enabled wireless power transfer system shows the dependency of each node to solve cognitive processes [13]. At the same time, aerial vehicles take part in industrial internet of things (IIoT) applications for inter and intra communication to perform optimal multipath routing [14]. A hybrid algorithm is proposed which is based on Markov decision process and random serial dictatorship for wireless charging of IoT devices using unmanned aerial vehicles [15].

Scientists have observed a number of problems with flying vehicles, including congestion, delay, and unbalanced energy while receiving data packets. While delivering value-added internet of things services to maintain a trade-off between energy consumption and operating time, although providing a solution to delay and energy-aware UAV selection [16]. AntHocNet routing is the approach inspired from the behavior of ants which can be implemented with different mobility models in the area of flying networks. Using our proposed scheme, ISH-DSDV is a table-driven routing by targeting flying ad hoc networks. To control the problem of energy imbalance and conserve aerial vehicles network life-time ISH-DSDV routing is formulated.

The DSDV routing protocol is used in the dynamics of aerial networks in this section. In addition, each UAV receives routing packet information from flying networks, which causes topology changes or, in some cases, forwards data packets and terminates the process. Because of the deployment of DSDV, every aerial node must have all of neighbors’ information. To avoid congestion, this strategy uses a unique mechanism called sequence number allocation by target node, which optimizes phase shifts. Every flying-IoT node prefers high sequence number in comparison with low. This protocol updates information in the routing table, which includes three metrics: final destination, distance, and next node [17]. Formulated approach gives the best use of information during transferring from one node to another. Working in the area of flying networks, a stale data entry method is introduced, which allows for the easy removal of entries that are not updated. Whereas the Fig. 3, elaborates the concept of improved sequencing heuristic based DSDV routing protocol for flying networks. The proposed algorithm consists of the following steps which are as under. 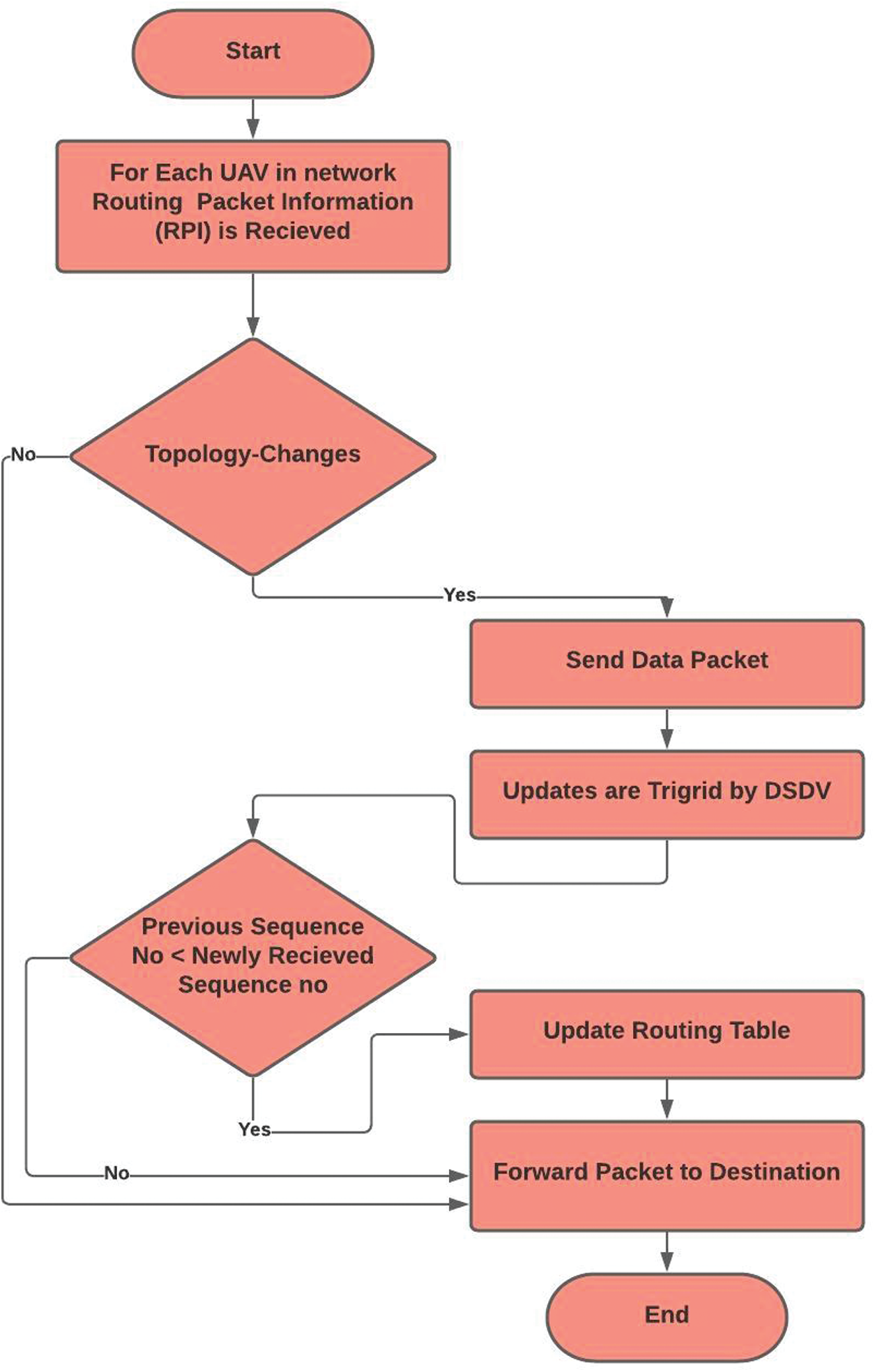 This parameter updates the overall routing table and broadcasts to all nodes in the network.

The UAV will be automatically removed from the network if the flying node does not refresh the routing table information.

The ISH-DSDV is the optimum technique for the internet of flying vehicles because it is appropriate for a minimal number of nodes. This method, on the other hand, is ideal for dynamic pattern-based flying networks.

Using the idea of nomadic mobility in this research, flying nodes move randomly at a specific point. Within the zone, aerial vehicles cover the maximum distance from the reference point. A random way point is employed while going from one region to another. This mobility pattern divides the flying-space to avoid collision [18]. Fig. 4 shows the moment of thirty unmanned aerial vehicles using nomadic mobility model.

UAV’s are placed in a diverse topological structure having network size of 1000 m × 1000 m. The flying network employs a nomadic mobility paradigm with thirty-one nodes, one of which is a land station. For comparison, we examined six routing protocols, and our proposed solution is based on DSDV routing.

This section includes the parameters to evaluate the behavior of the network.

The rate of successful packets delivered over a communication medium to the final destination. Throughput is measured in kilobyte per second (Kbps), as shown in Eq. (1). Internet of flying vehicles faces a lot of problems due to dynamic behavior. In terms of throughput estimation, moreover, AntHocNet and DSDV routing shows better results. AntHocNet, AOMDV, DSDV, DSR, M-DART and ZRP routing methods are used to evaluate network throughput in Tab. 2 and Fig. 5. While the graphical view of Tab. 2 is mentioned in Fig. 6. 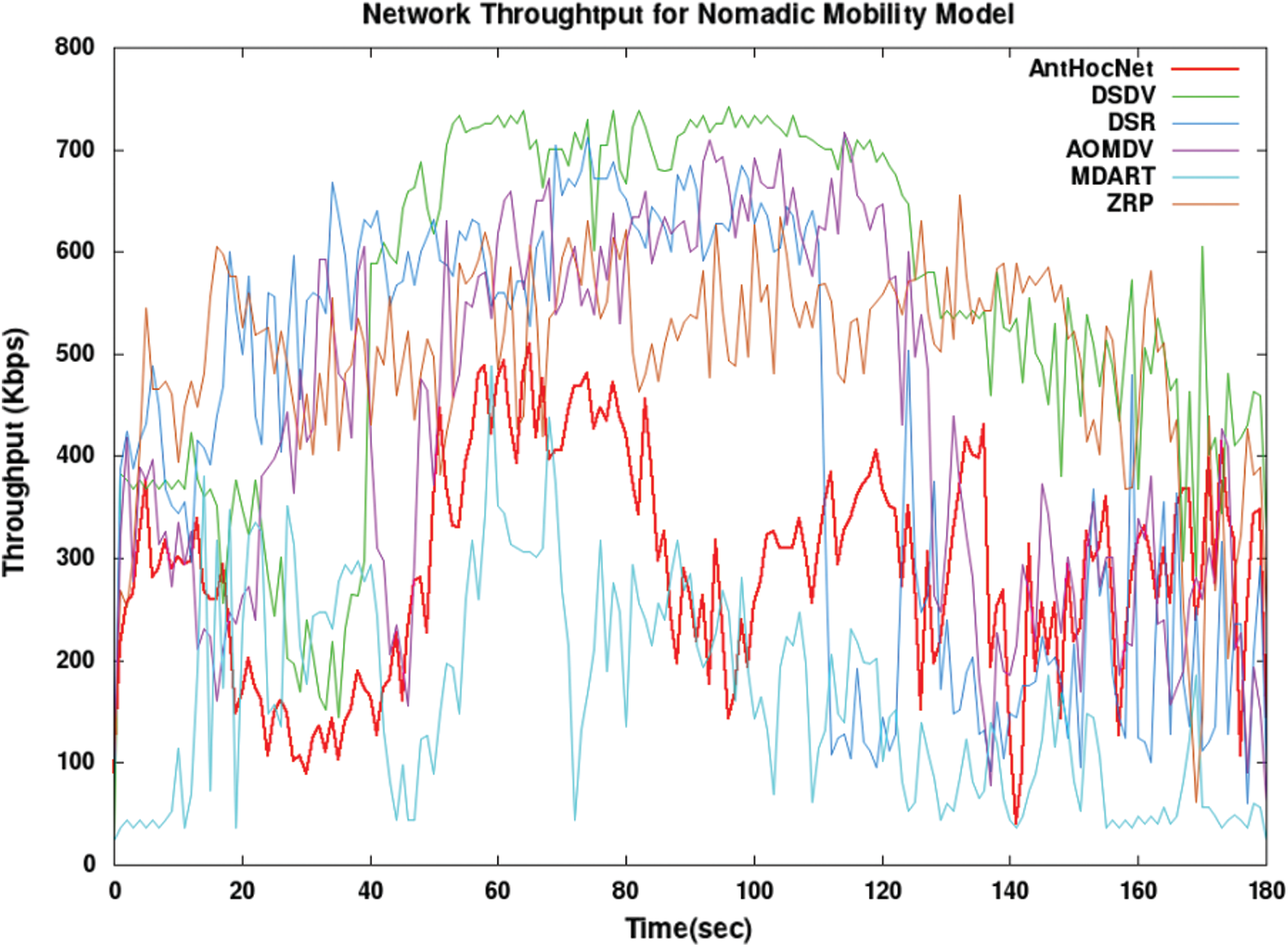 Number of data packets drops, it causes delays and has a negative effect on the performance of the service. High level of latency indicates a less reliable network which is not feasible for fast-changing topological networks. Tab. 3 describe packet drop rate study of each routing protocol. Therefore the packet drop counts are presented in Figs. 7 & 8 which shows the abstract graphical view. 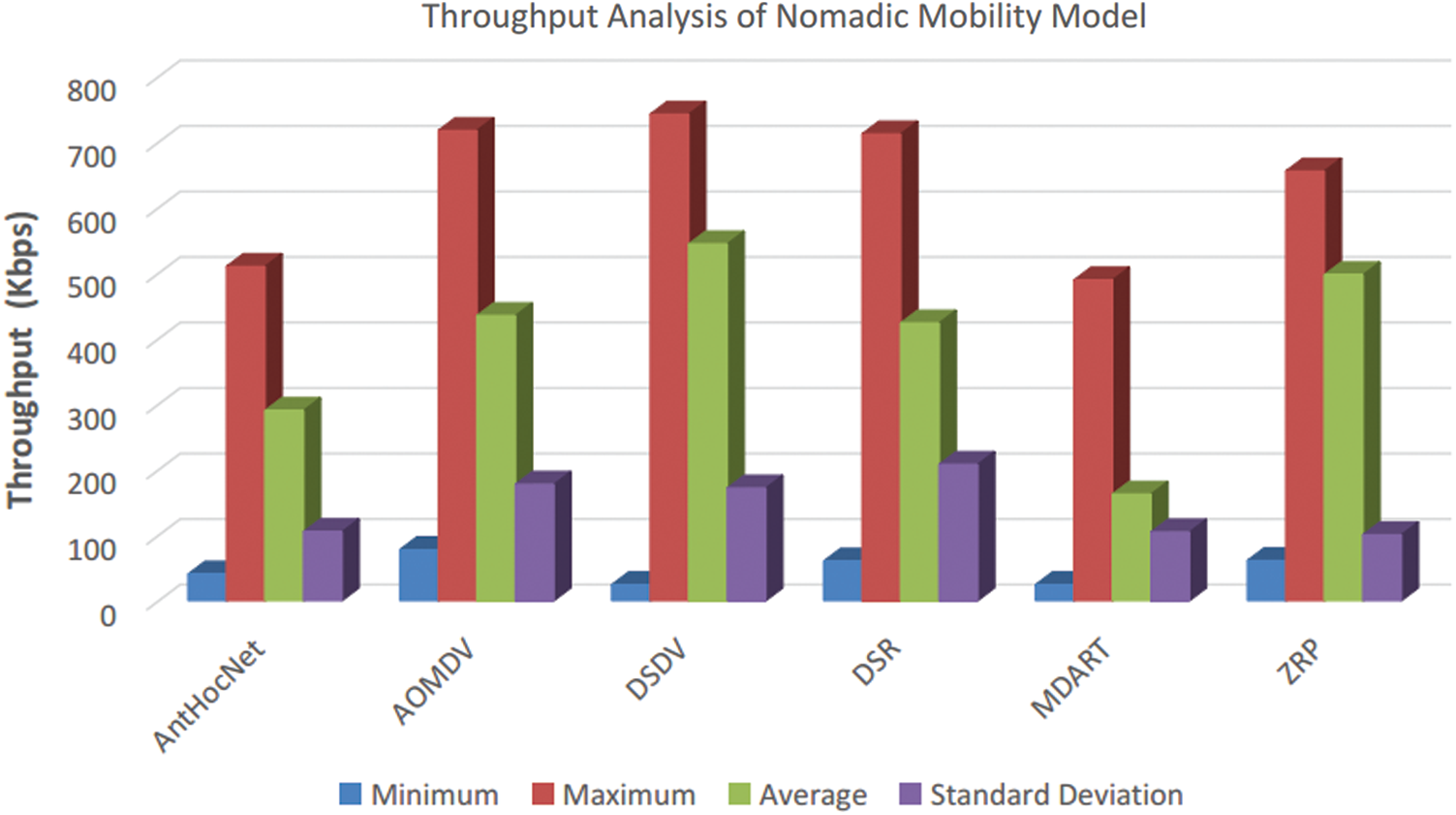 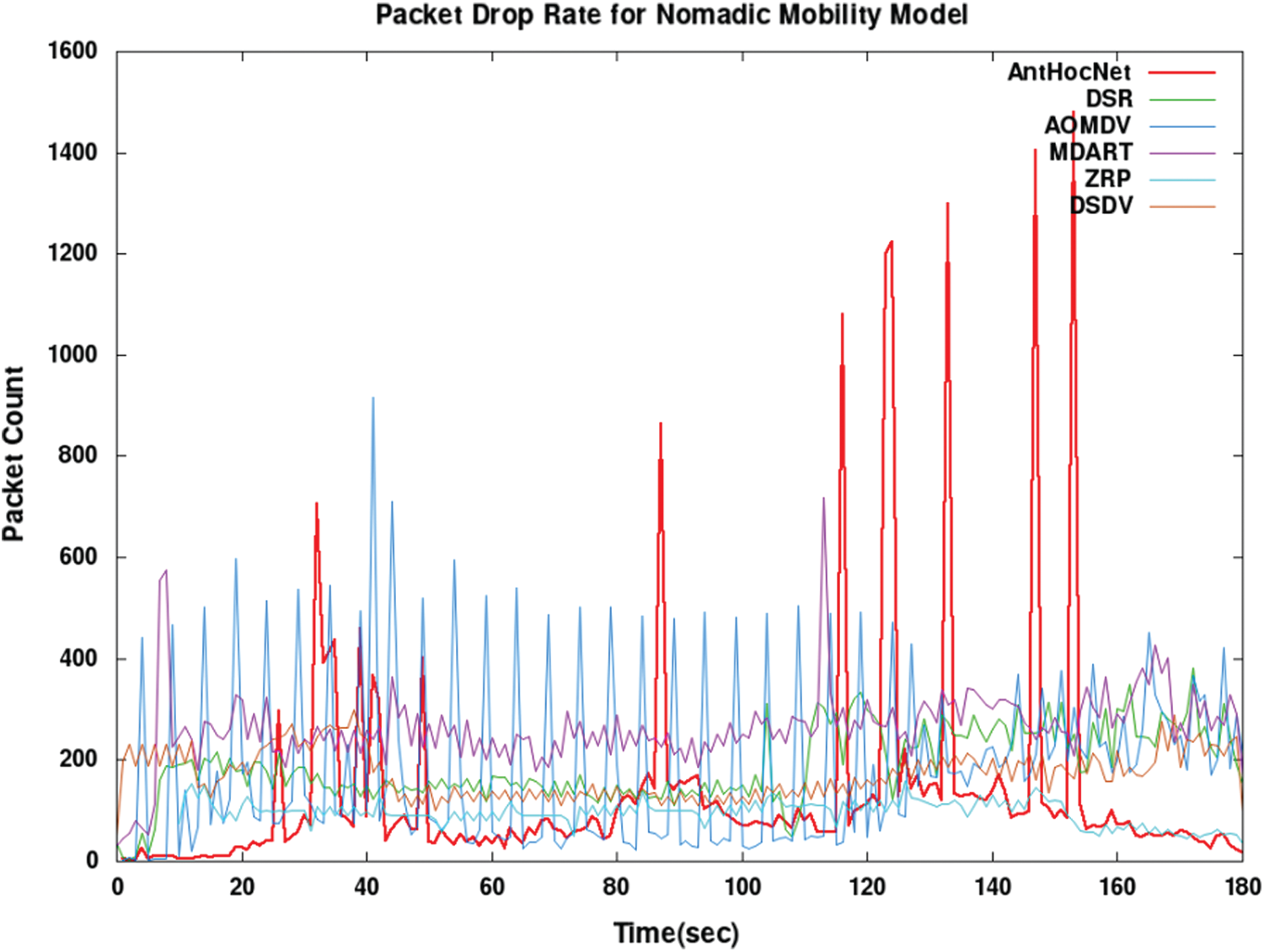 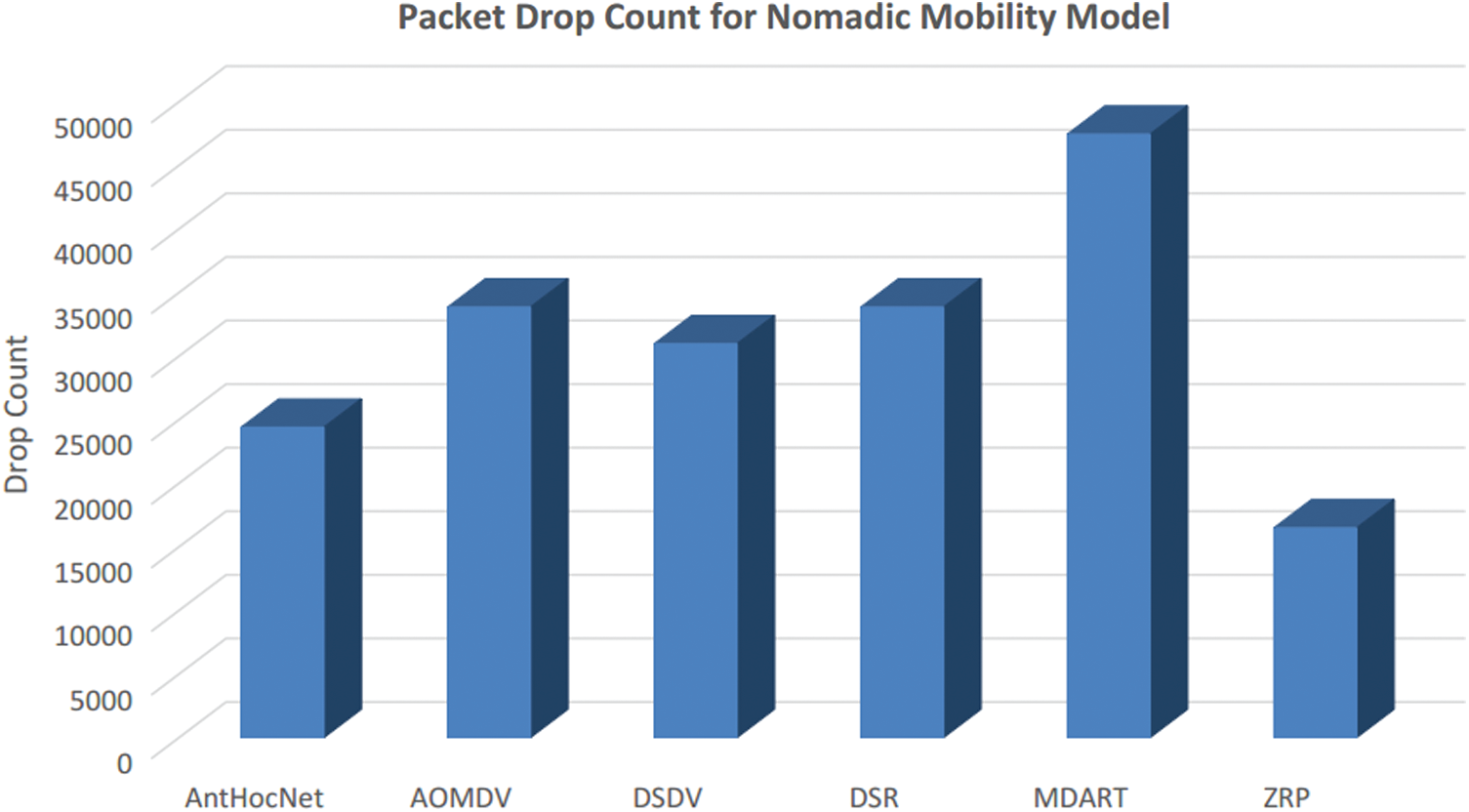 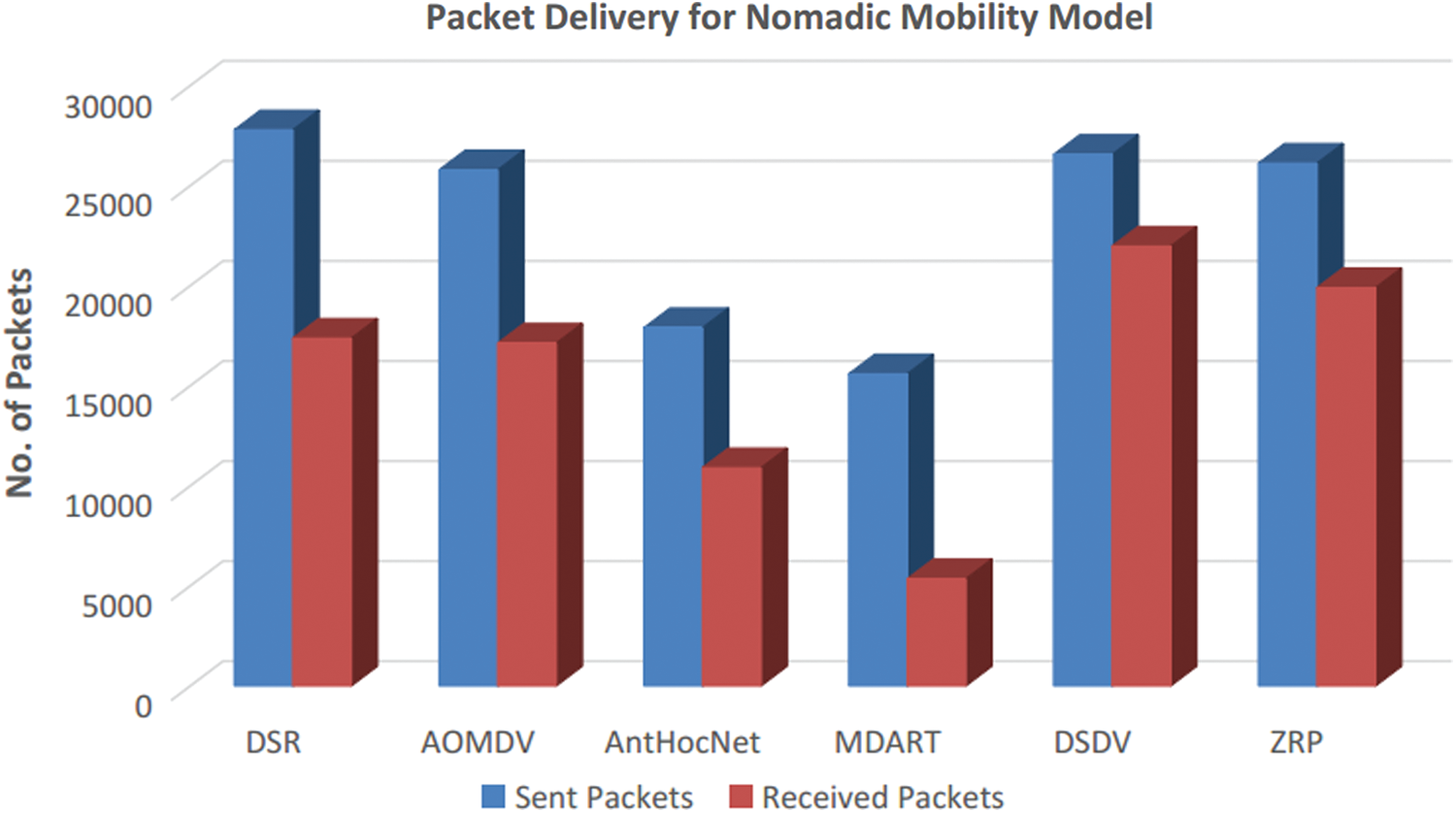 The parameter packet-loss is well explained in Tab. 5 and Fig. 10 shows the same metrics in graphical form where different routing protocols are used. DSDV shows very less packet loss in comparison with other routing techniques. However Tab. 5 is having the brief study regarding packet loss using DSR, AOMDV, AntHocNet, M-DART, DSDV & ZRP. 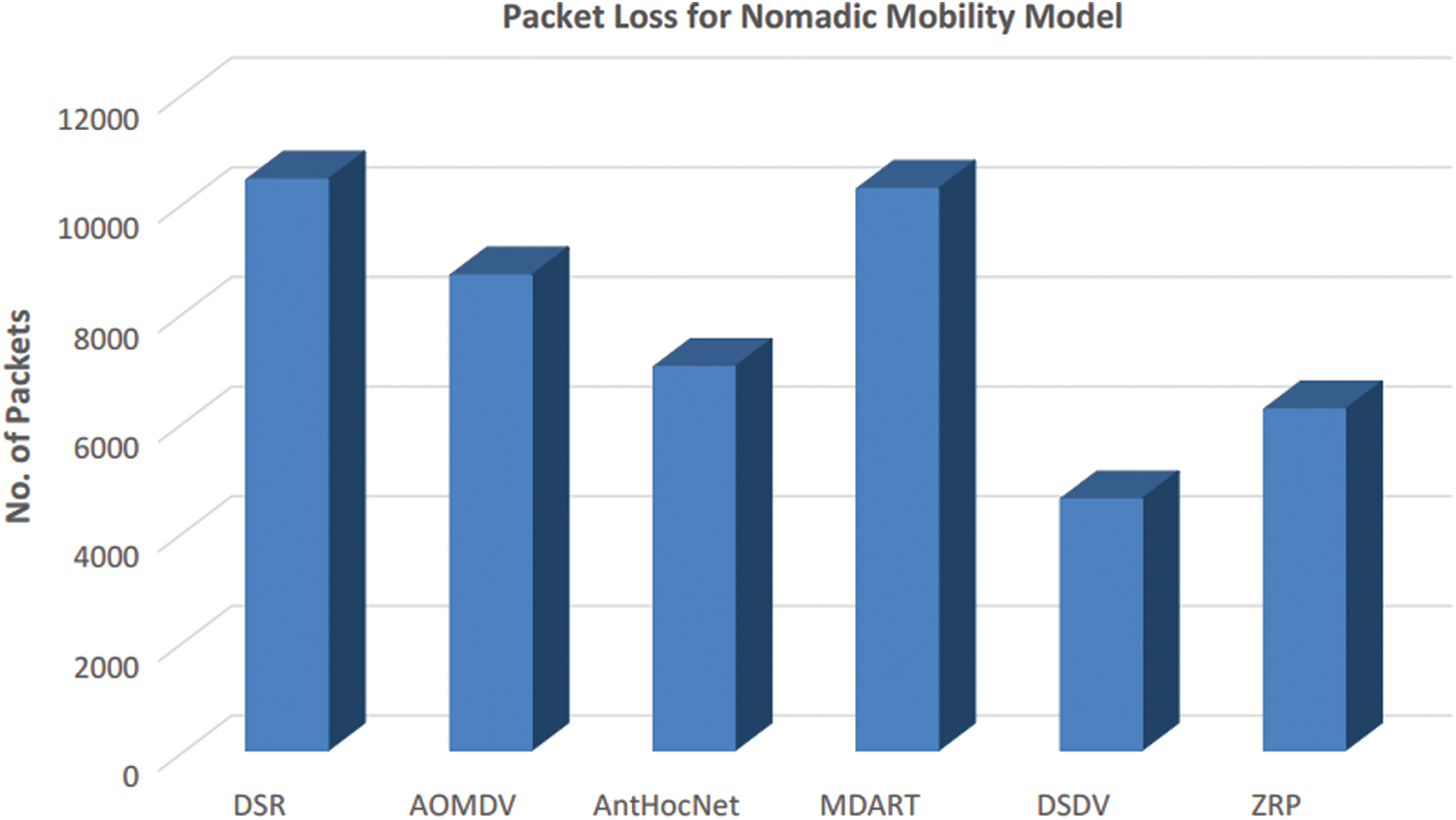 The overall sum of the delivered data packets divided by per unit time in kilo bits per second use to calculate network utilization. Channel utilization with two different scenarios in flying-IoT networks are given in Tab. 6. The performance is properly checked and presented in Fig. 11. 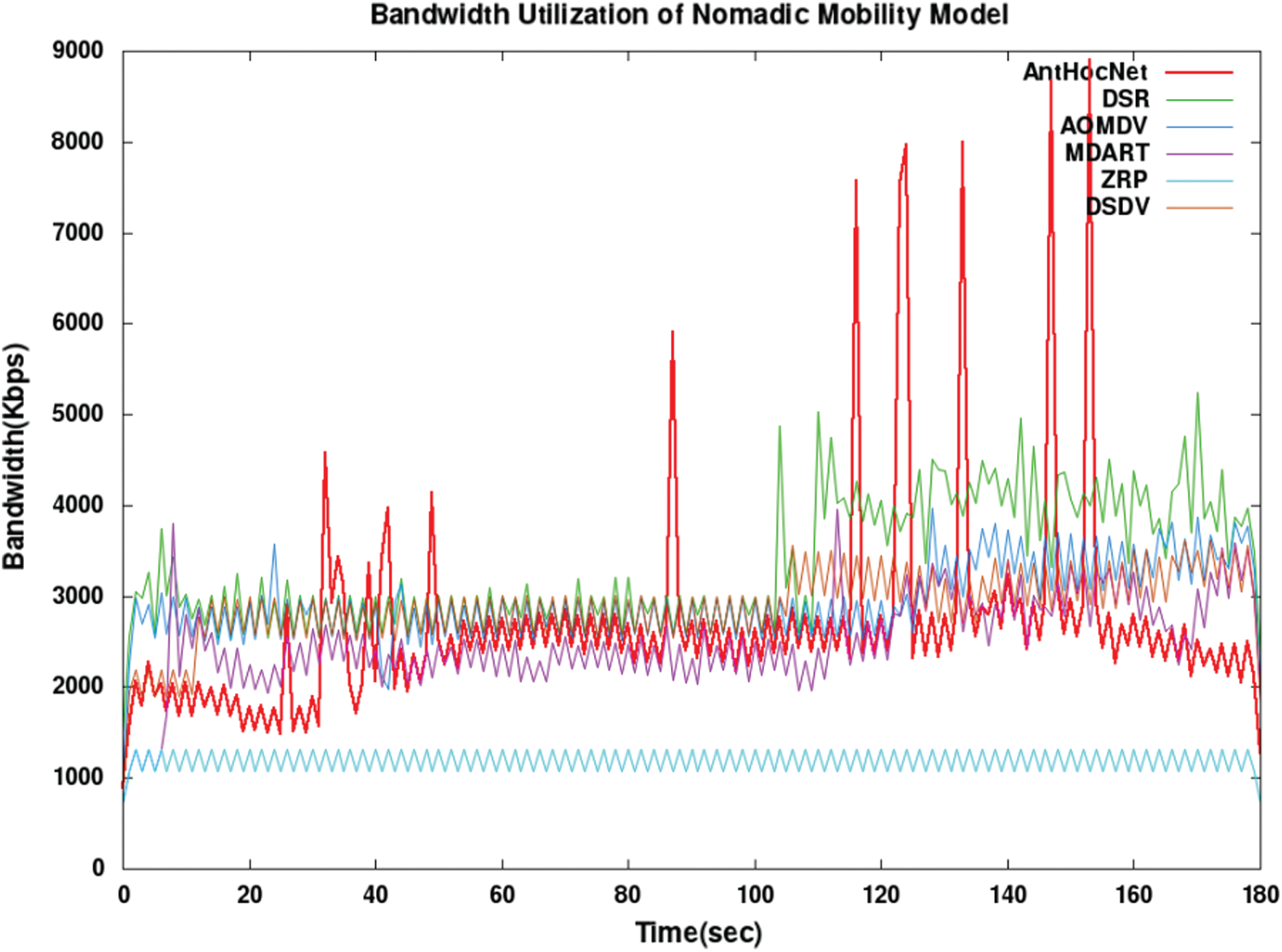 Network flow in NS-2(v2.35) may trace the cycle from initializing information packets until it reach by the target node. While doing simulation three routing techniques shows better results which include DSDV, M-DART and ZRP. Fig. 12 and Tab. 7 illustrates DSDV routing is having very less delay factor in comparison with other protocols. Eq. (3) shows delay formula which are as under. 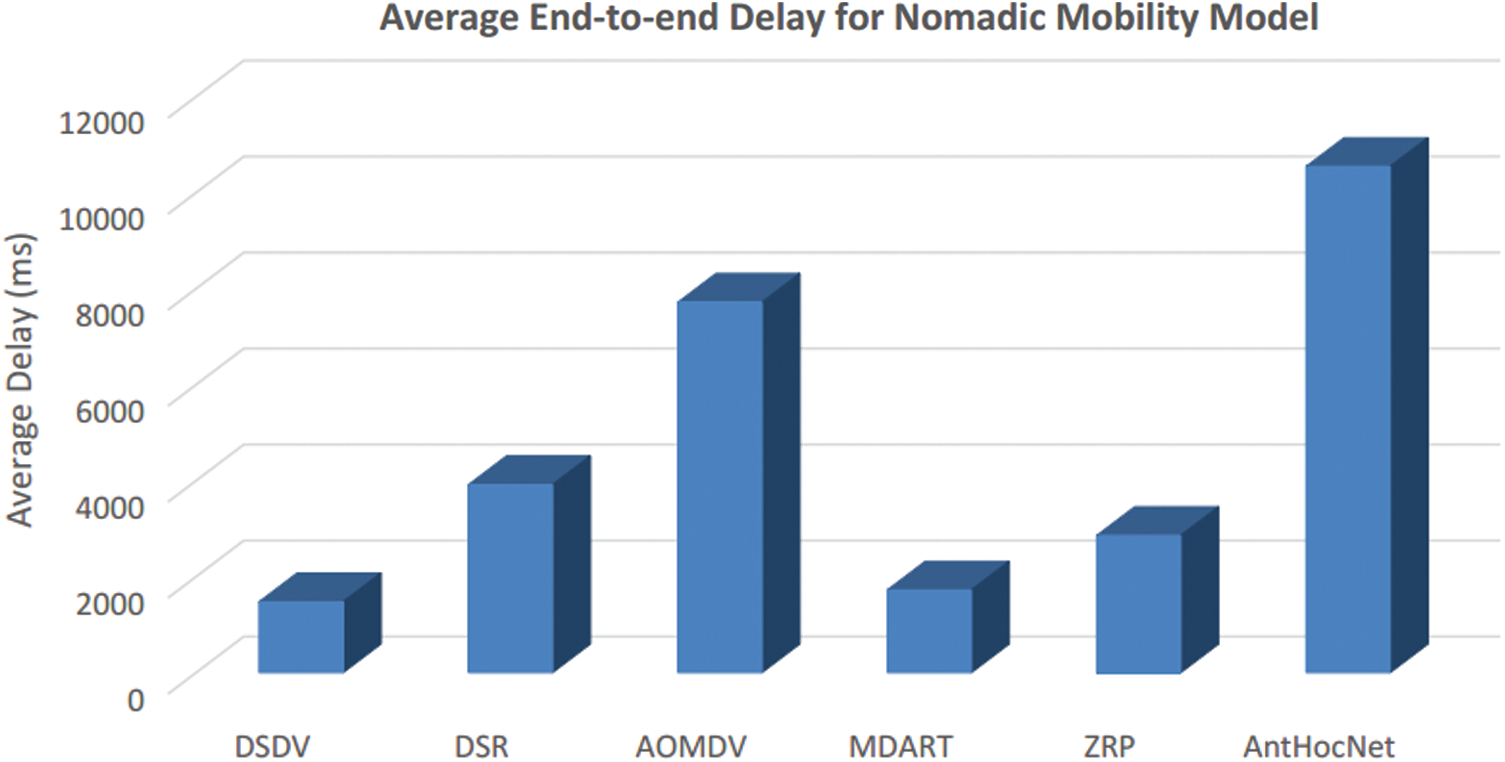 Flying-IoT with the integration of smart cities is the better approach to overcome on end-to-end delay. FANETs are the most reliable and easy to deploy in any situation, which has gained the interest of the scientific community and industrial stakeholders. Flying-IoT works mostly in three-dimensional environments to better support applications. The key problem that a flying-IoT network faces is to ensure that all limited resources can be used effectively. The main aim behind this research study is to address resource problems in terms of throughput, bandwidth, End-to-End delay, packet delivery ratio. In the area of flying-IoT networks, DSDV is lightly weighted for enhancing network lifetime. The nomadic mobility model has played an essential role in solving the problems associated with UAV networks.

In overall analysis, the proposed solution has performed well and utilized resources more efficiently. Simulation results showed that light-weighted-ISH-DSDV is a better choice to deploy into the dense network. In the future, for secure communication in smart cities, cyber-secure protocol will be a novel contribution.