Since some attributes have more influences in discriminating the classes, an alternative approach is to apply an attribute weighting method. In this approach, different weights are assigned to different attributes with a higher weight for attributes that have more influences. Although there are many methods proposed to calculate the weights for naïve Bayes learning, these methods incorporate the weights by raising the power of the conditional probabilities. However, incorporating weights in this manner may cause the conditional probabilities to behave inversely. In this paper, we propose a method to address this issue. The proposed method is evaluated on public benchmark datasets and compared to other baseline attribute-weighting methods.

Yu et al. [11] proposed a weighted adjusted naïve Bayes, where the attribute weights are iteratively adjusted using the wrapper method. Weights are updated by using a threshold to evaluate the performance of the current attribute weights. The final optimised weights are then used to train the attribute weighted naïve Bayes. A similar work was seen in the work of Yu et al. [12] where they proposed a hybrid attribute weighting method that combines filter and wrapper approaches. Rather than initialising a constant weight for each attribute, the correlation-based weight filter is applied to initialise the weights. The wrapper method is then applied to iteratively update the weights. Such methods, however, have high computational cost.

In this section, we describe our proposed method and the rationale of our method.

The naïve Bayes classifier is a probabilistic model that applied the Bayes theorem in classification [15]. Given an instance to be classified based on the values of n attributes, A = (a1, a2, …, an), we can calculate the conditional probability that the class of this instance is C as below:

In practice, we are only interested in the numerator in Eq. (1), which is the joint probability of class C and the attributes. With the strong conditional independence assumption in naïve Bayes classifier, this joint probability can be expressed as the following:

The naïve Bayes classifier classifies the instance by maximizing the probability at the right hand side of Eq. (2). The class of this instance is labelled as cj if

3.2 Rationale of Our Proposed Method

The conditional probability represents the probability of observing the value ai given that the class is cj. This probability should be larger if the chance to observe ai is highly dependent on class cj. The weight wi of attribute ai should also be larger if this attribute has a higher influence compared to other attributes. When we incorporate the weights into the naïve Bayes, we are looking for a relationship as in Eq. (5), 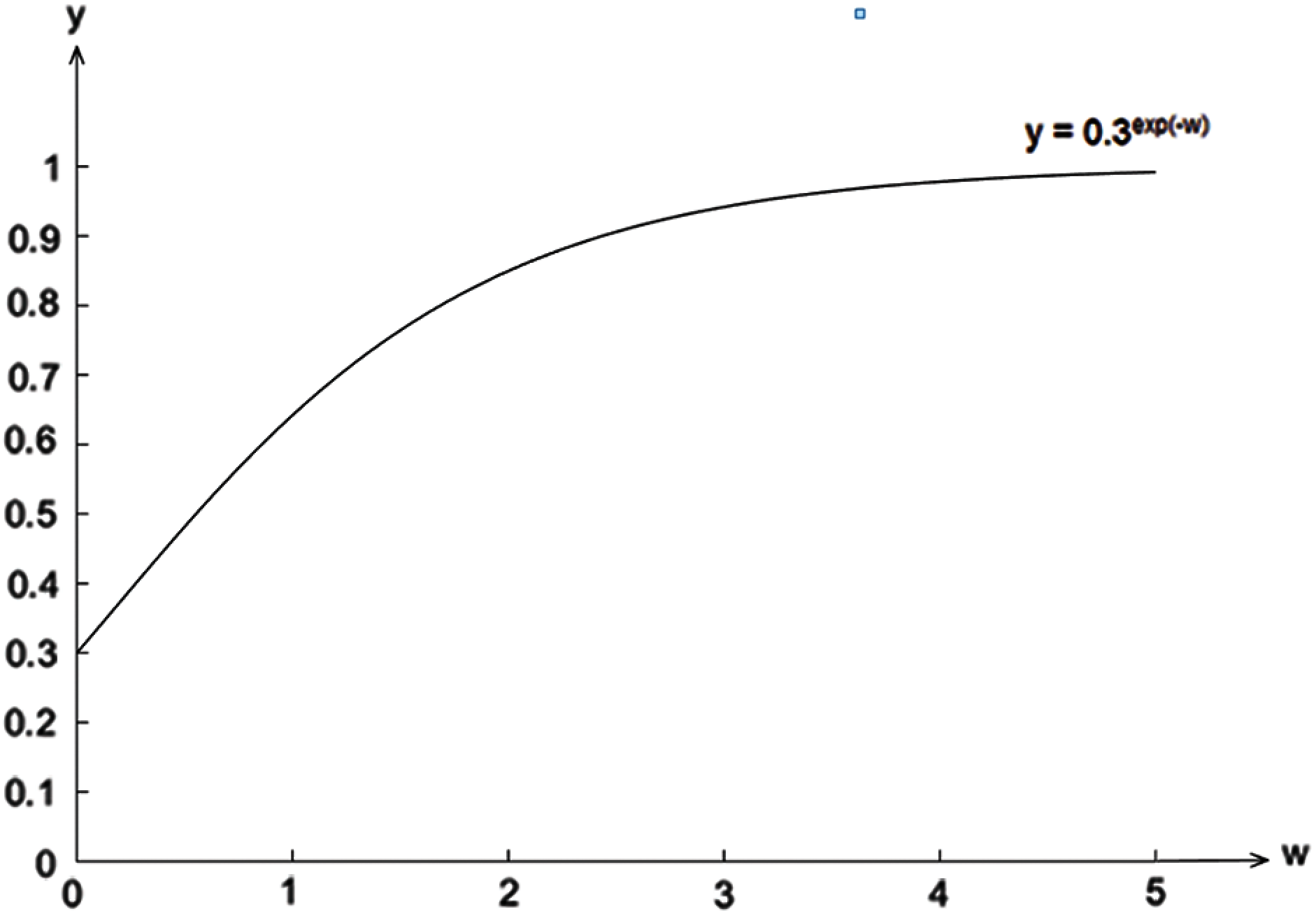 Figure 1: The changes in for different weight values (w)

The performance of our method is evaluated on a collection of 9 public benchmark datasets obtained from UCI repository [16] and 1 dataset obtained from the United States Food & Drug database (FDA) [17]. The FDA dataset contains 7 attributes to classify the severity of adverse drug events encountered by Osteoporosis patients from year 2004 to 2018. Tab. 1 provides a description of the datasets used in the experiments.

All instances with missing values were removed from the dataset and numerical attributes were discretized using the supervised discretisation method of Fayyad et al. [18]. Numerical attributes that have only one interval after discretization are not included in the modelling process.

To evaluate the performance of our method, these data were cross-validated using a 5-fold cross-validation method. Stratified sampling method is used to sample the training data. The train:test ratio is 70:30 for each class. The classification performance was obtained by averaging the results from the 5 runs. Two measurements were used to evaluate the classification performance: accuracy and F1. Accuracy measures the number of times the model correctly makes the prediction, while F1 is the harmonic mean of precision and recall. 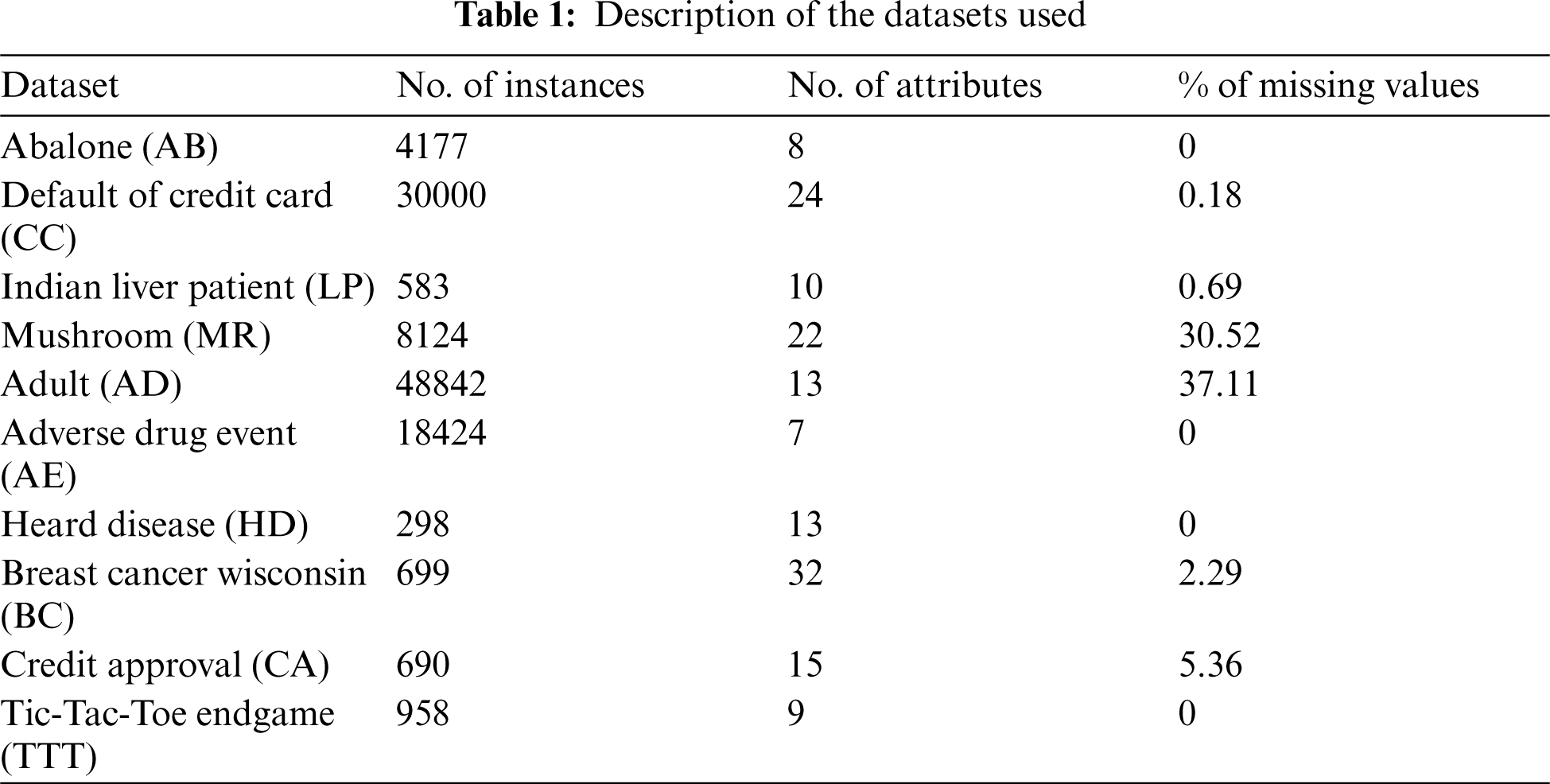 The classification performance of our method using KL measure as attribute weights and standard naïve Bayes is presented in Fig. 2. Our method performed better in both accuracy (Fig. 2a) and F1 measures (Fig. 2b) for 6 of the datasets (AB, CC, LP, MR, AD and AE). Both methods achieved the same performance for BC dataset. The standard naïve Bayes performed better for HD, CA and TTT datasets. 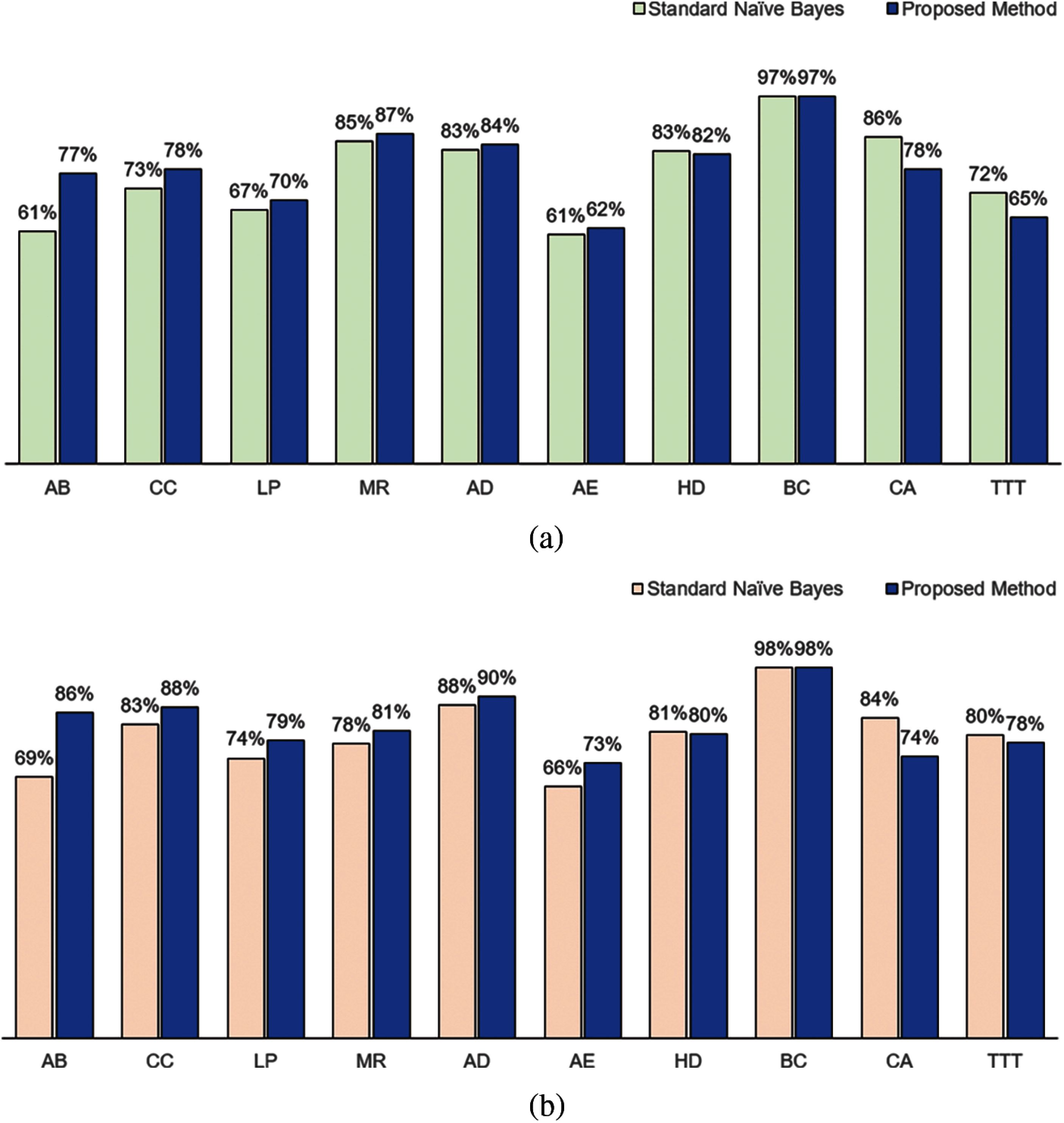 Figure 2: Classification performance in terms of (a) Accuracy and (b) F1 between standard naïve Bayes and proposed method using Kullback-Leibler measure as the attribute weight 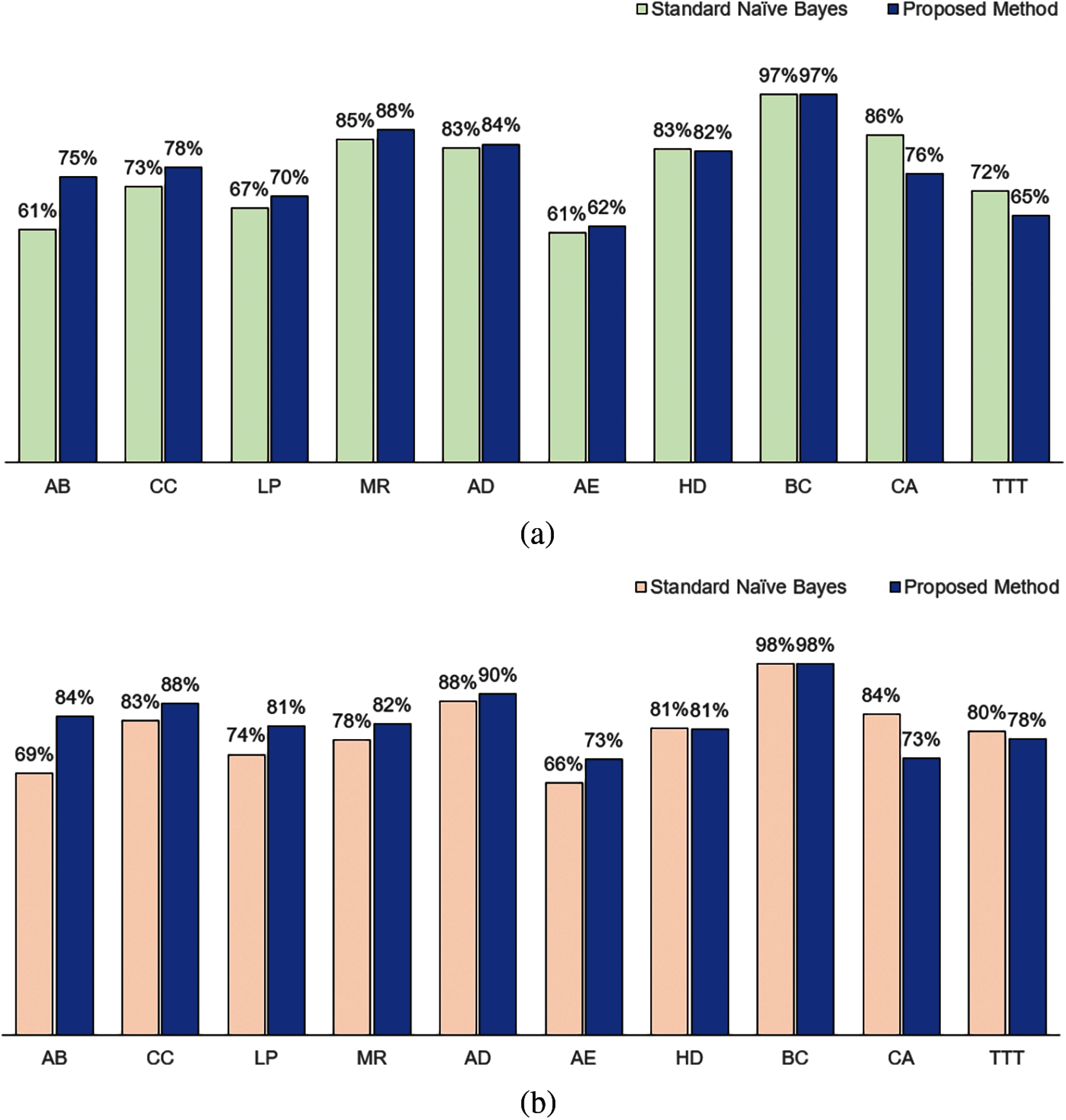 Figure 3: Classification performance in terms of (a) Accuracy and (b) F1 between standard naïve Bayes and proposed method using information gain measure as the attribute weight 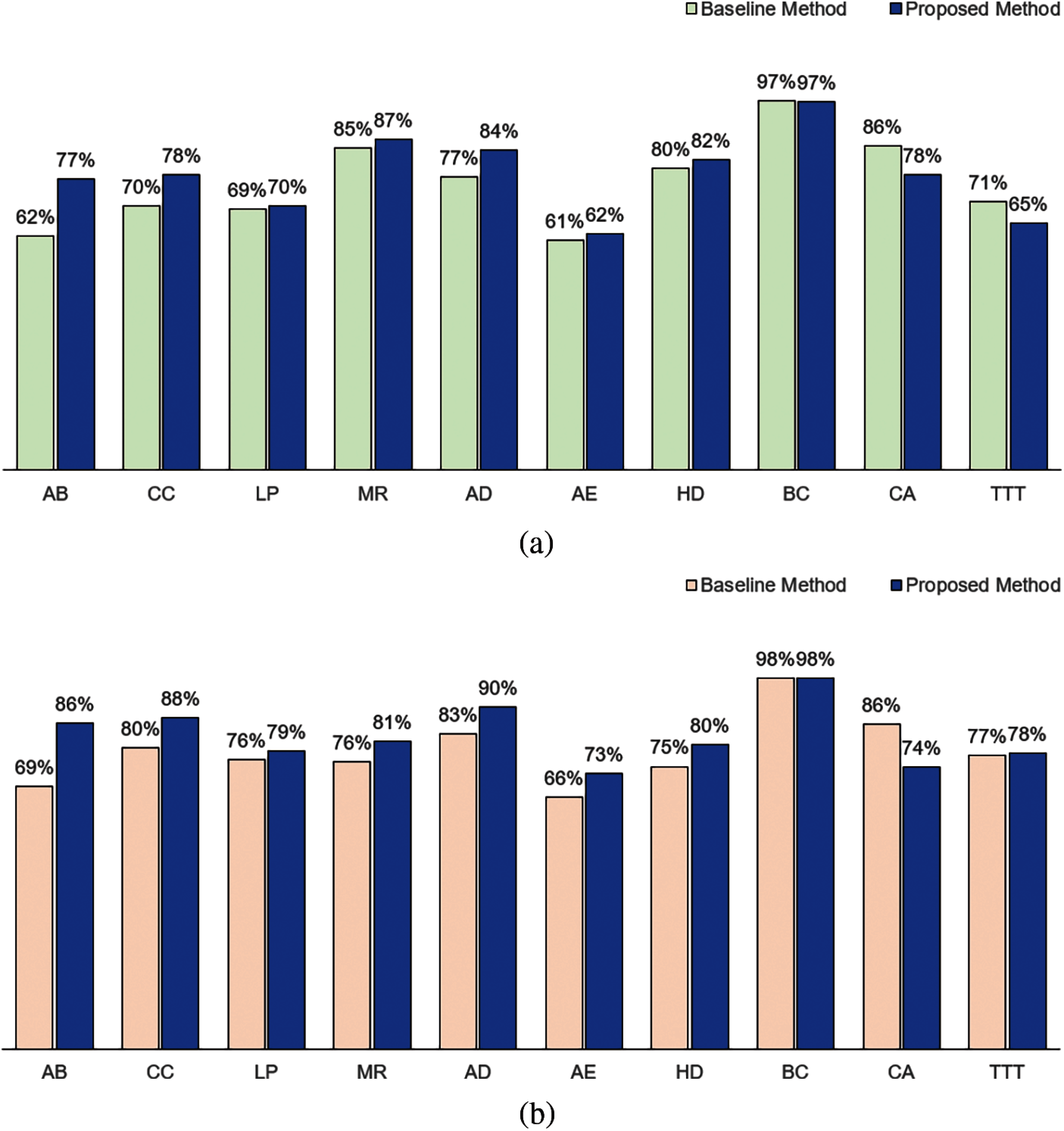 Figure 4: Comparison between baseline method and proposed method based on Kullback-Leibler measure: (a) Accuracy and (b) F1

When IG measure is used as the method to compute attribute weights, we observed the same performance results. As shown in Fig. 5, in terms of accuracy, our method performed better for AB, CC, LP, MR, AD, AE and HD datasets; has an equivalent performance in BC dataset and not as good in CA and TTT datasets as compared to the baseline method. In terms of F1, our method performed better for 8 datasets (AB, CC, LP, MR, AD, AE, HD and TTT), performed equivalently for the BC dataset, and not as well for CA dataset. 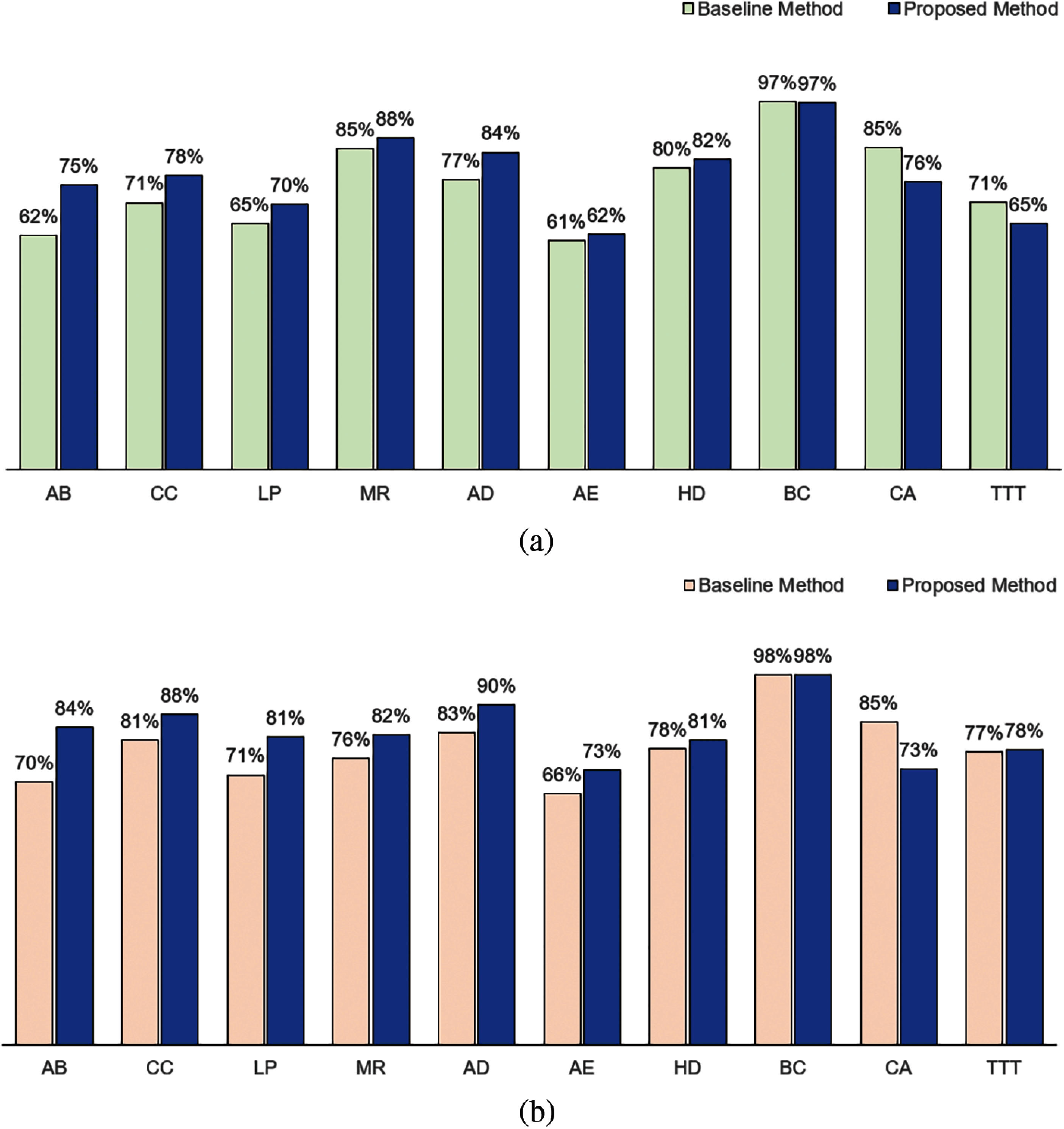 Figure 5: Comparison between baseline method and proposed method based on information gain measure: (a) Accuracy and (b) F1

5.3 Further Investigation on the Classification Performance 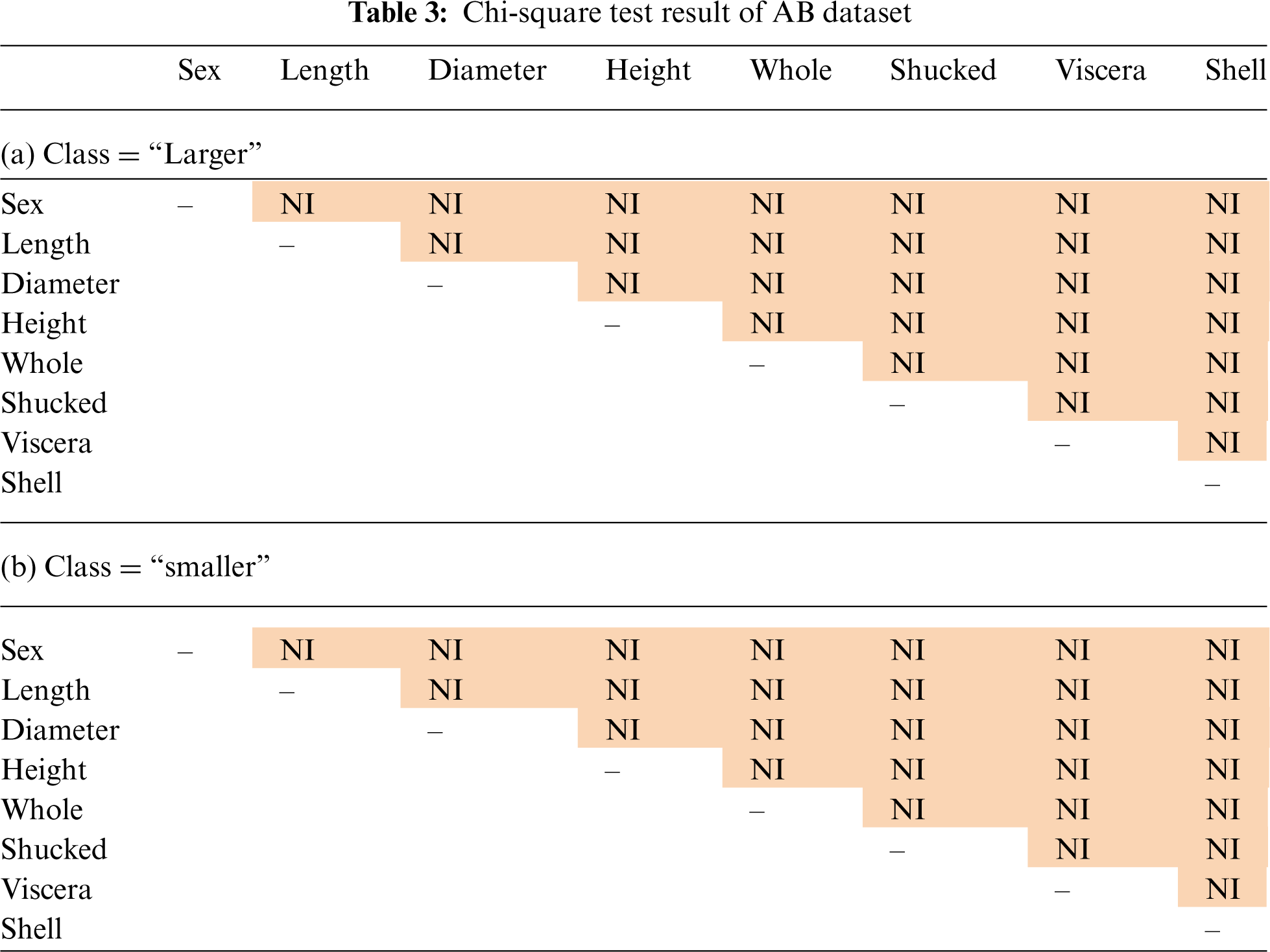 Tab. 4 shows the results of chi-square test on CA dataset, where our method did not perform as good as the standard naïve Bayes and baseline methods. This dataset has 9 attributes with two classes: “positive” and “negative”. Although some “NI” values were observed in Tab. 4, there are also many “I” values. These results showed that some of the attributes in CA dataset are pairwise independent. Although the independence assumption does not hold for all the attributes, the violation is not as serious compared to AB dataset. 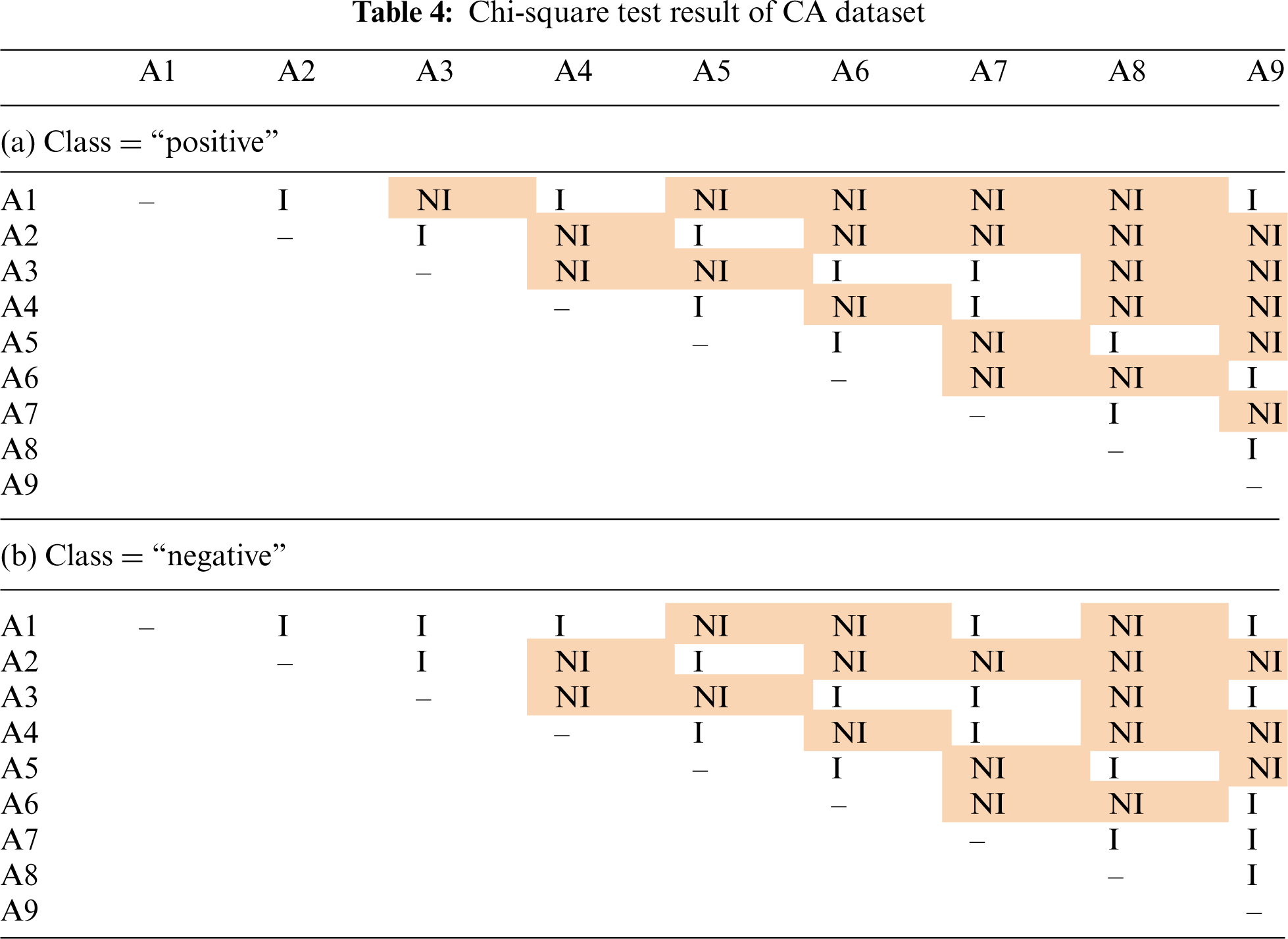 For the other datasets where our method performed better, we see a similar results of chi-square test alike the one in AB dataset. For example, out of 55 pairwise chi-square test in MR dataset with 11 attributes, only 2 pairs of attributes are independent in one class and 7 pairs are independent in another. This again means that there is a serious violation on the independence assumption. Our method to incorporate attribute weights is still able to achieve a higher performance even when the independence assumption is seriously violated. 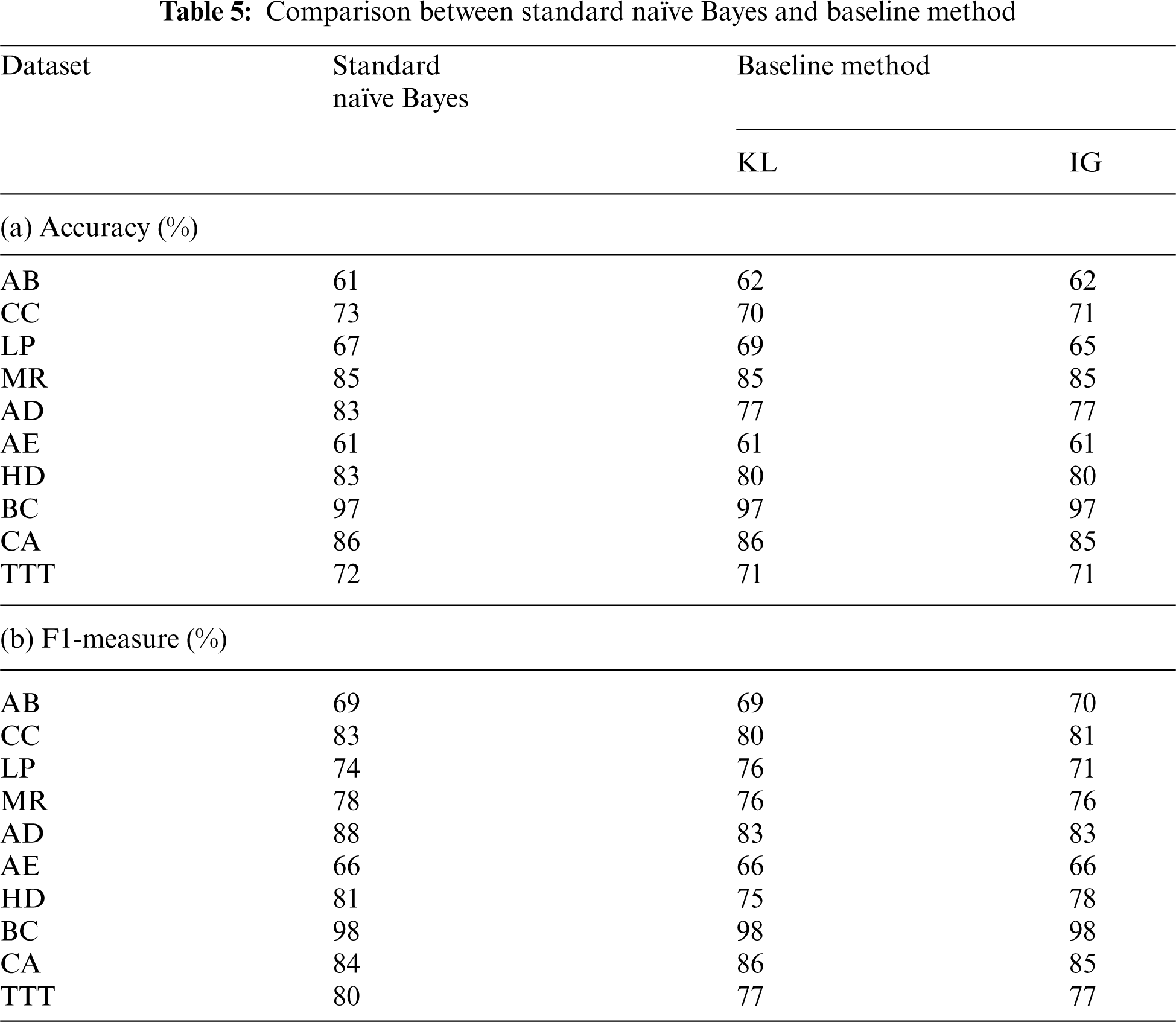 This paper proposed a new method to incorporate the attribute weights in the computation of conditional probabilities for naïve Bayes classifier. In this paper, we explored two attribute weights based on Kullback-Leibler and information gain measures, and incorporated these weights using our method. We evaluated our method on public benchmark datasets obtained from UCI and FDA repositories. Our attribute weighting method outperformed both the standard naïve Bayes and baseline weighting methods in terms of accuracy and F1. Our method is able to achieve a better performance even when the conditional independence assumption is seriously violated, which is validated with the chi-square test.