Research on Optimization of Random Forest Algorithm Based on Spark

The rapid development of the Internet has led to the continuous generation of different types of data in various industries. As such, the question of how to obtain valuable information from the massive data through data mining has become a focus of attention. As a classification algorithm in data mining, the random forest algorithm [1], is widely used in credit evaluation {[2–4]}, image classification [5,6], text classification [7], among others. This can be attributed to it being better at avoiding over-fitting without being sensitive to noise values. Research into the random forest algorithm, have mainly focused on the relationship between the classification interval of the classifier and the analysis of its generalization ability, while proposing a random forest pruning algorithm based on the classification interval weighting [8]. Further, an interval weighted voting method was advanced [9], and a weighted random sampling was used to filter out features with minimal information in the selection process [10]. In order to select the important features for decision tree splitting, weights were assigned to feature values and subspaces were constructed according to the mean of the weights, thereby improving the classification effect of the algorithm [11].

As a memory-based distributed computing platform, Spark has significantly poweful computational efficiency, and the high parallelism of the random forest algorithm also means that the algorithm is quite suitable for integration into the Spark platform for parallel computing as a means to increase the computing speed of the algorithm and increase data processing efficiency.

Several scholars have conducted research related to the random forest algorithm based on Spark. A method relying on similarity calculations and feature similarity graphs was proposed to optimize the performance of random forest from the perspective of feature selection [12]. Additionally, a random forest algorithm based on rough set theory was also considered [13]. Here, this algorithm calculated the importance of attributes based on a discernibility matrix and selected the first several attributes with the highest importance to form the feature subspace. Related research has also been conducted on randoms forest while processing high-dimensional data, and a hierarchical subspace implementation was proposed to provide a solution for the issue where random forest algorithms cannot distinguish feature correlation when processing high-dimensional data [14].

The main research conducted for the present paper includes the following parts:

a. Theoretical research on the random forest algorithm

b. Research on optimizing the feature subspace of the random forest algorithm

c. Parallel implementation of the random forest algorithm based on Spark.

As a distributed computing and processing platform similar to Hadoop, Spark uses the concept of Shuffle to implement distributed computing. Hence, Spark differs from Hadoop in that calculations are performed based on memory and the intermediate output and results from tasks are saved in the memory, thereby saving a significant amount of disc access overhead and effectively improving the efficiency of data reading and writing.

The basic ecosystem of Spark is shown in Fig. 1.

As shown in Fig. 1, the Spark ecosystem primarily includes:

The components above and Apache Spark form the Spark ecosystem.

The most basic data structure is Resilient Distributed Dataset (RDD) and is the most fundamental operational unit in Spark [15]. This data set has a certain scalability and supports parallel processing. RDD adopts a delay computing system and supports two operations: conversion and action. The calculation will only proceed when there is an absolute necessity for the results to be returned to the RDD. This lazy operation mode also effectively improves calculation efficiency. In addition, Spark provides users with richer and simpler operations, including creation operations, conversion operations, control operations, and mobile operations to allow developers to fully utilize these operators to operate on RDD. Due to the high computing efficiency inherent in Spark, the application research for Spark is considerably extensive, including large-scale text analysis [16], large-scale data mining [17], etc.

The random forest algorithm is primarily concerned with solving the over-fitting phenomenon and optimal issues that easily occur when a single decision tree is classified. The principal reasons for solving these problems are as follows:

(a)   The random forest algorithm obtains a sample subset through random replacement sampling to ensure the randomness and diversity of the training samples of the decision tree.

(b)   The random forest algorithm provides optional feature attributes for node splitting by randomly extracting feature subsets, ensuring the difference of varieties of decision trees in the generation process.

(c)   When the random forest algorithm classifies the final result, the final result is selected by combining multiple decision trees to vote, thereby preventing the algorithm from encountering local optimal and over-fitting problems.

3  Analysis of the Random Forest Algorithm

Regarding the traditional random forest algorithm, how classification accuracy influences redundant feature algorithms is not considered when forming the feature subspace, and the classification strengths of different decision trees are not distinguished. Therefore, a weighted random forest (W-RF) algorithm is proposed in the present paper. In this section, several pivotal parts of the W-RF algorithm will be described in detail: feature importance calculation, feature subspace generation, and decision-tree weight calculation.

In the node splitting stage of decision tree training, the traditional random forest algorithm is utilized to randomly extract several features from the data set to form a feature subspace and select a feature from the feature subspace for node splitting. To that end, feature subspace effectiveness must be ensured. Firstly, the features need to be distinguished. The Relief-F algorithm is a feature selection algorithm, and feature selection is performed by calculating the feature weight in the classification. The feature weight is measured by the differences between the neighboring points of the features of the same type and the neighboring points of different types. If a small difference is presented in a feature between samples of the same type and a large difference between samples of different types, this indicates that the distinguishing ability of the feature is high; otherwise, this indicates that the distinguishing ability of the feature is low. In the present study, the feature weight of the Relief-F algorithm was converted into feature importance for feature distinction.

A sample Xi belonging to category C in the data set S was randomly selected. First, the k nearest neighbor samples in similar samples to Xi were found and recorded as Hj (j = 1, 2, 3,…, k), and then the k neighbor samples were extracted as Fdj (j = 1, 2, 3,…, k) from samples differing from Xi in the category sample set where d represents a different class from the class C that Xi belongs to, and the distance between Xi and Hj and Fdj was calculated. This process was repeated m times to obtain the feature importance of feature A.

The importance calculation method of feature A is shown in Eq. (1).

Once the importance of all the features was calculated, the features were classified, that is, a higher importance for a feature meant higher category relevance during classification and conversely, a lower importance for a feature meant lower category relevance during classification. Taking this into account, two disjoint feature sets could be obtained. Specifically, the feature set was divided into strong correlation features NS and weak correlation features NW according to the threshold . The value of is the average value of feature importance, and the calculation method is shown in Eq. (7).

When performing hierarchical extraction, the proportion of strong and weak related features is related to the importance of strong and weak related features, which is specifically expressed as: assuming that there are Sub features in the feature subspace, then the strong correlation feature in the feature subspace number NumNS is:

The core ideas of the improved algorithm are as shown in Tab. 1.

The evaluation indicators for classifiers were primarily divided into the aforementioned categories. The indicator used in the present article was the classification accuracy rate, which is a common indicator in classifier evaluation. The specific calculation method is shown in Eq. (11).

In the present study, multiple data sets were tested to compare and verify, and the classification accuracy of different data sets before and after the algorithm was improved under different numbers of decision trees, as shown in Fig. 2. 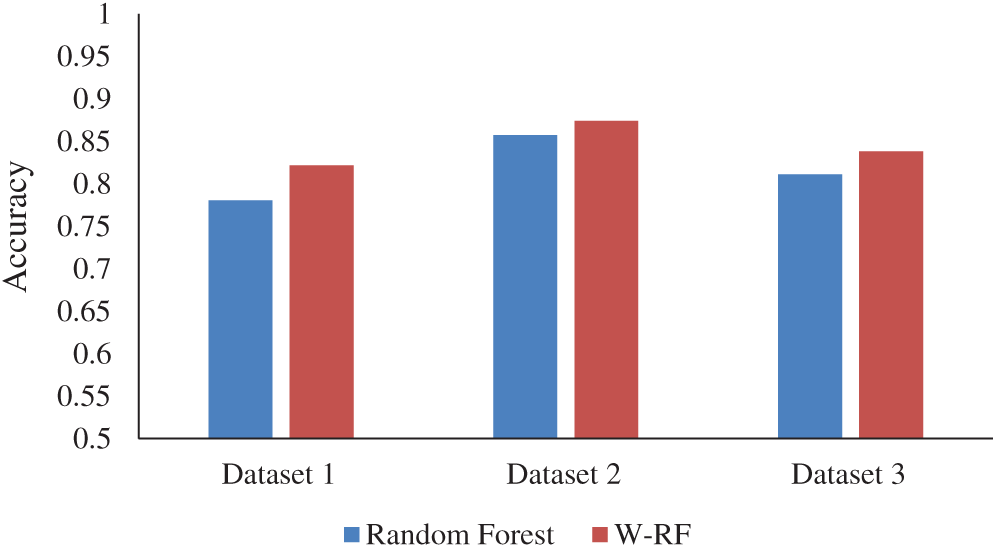 Subsequently, for the present study, algorithm acceleration effect verification was conducted in the Spark cluster environment to verify whether the algorithm exhibited a positive parallelization acceleration performance. The verification standard is the speedup ratio, which is used to describe the reduction effect of the running time of the parallel algorithm. The calculation method is shown in Eq. (12). 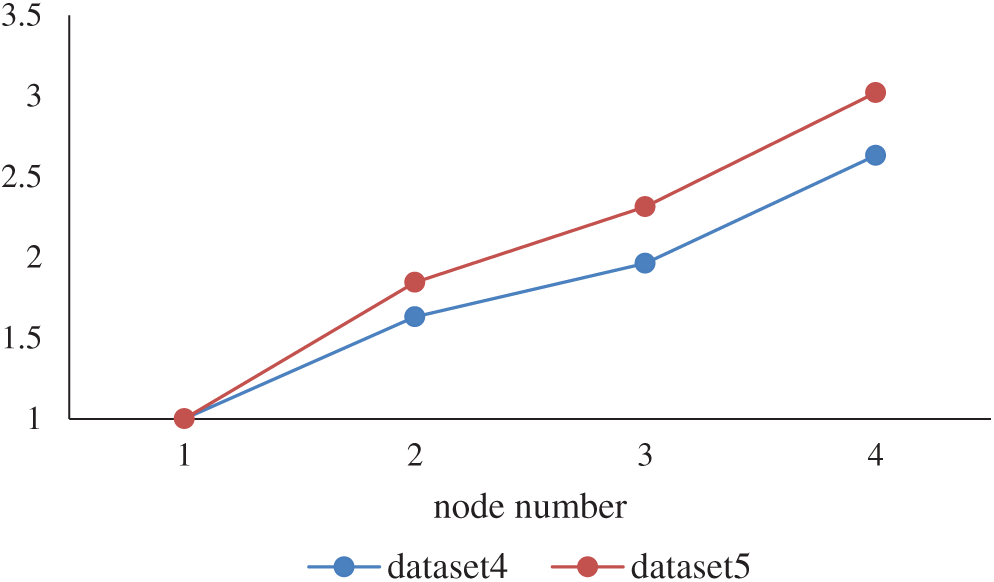 Fig. 3 evidently shows that as the number of working nodes in the Spark cluster increased, the algorithm speedup ratio also increased. This demonstrates that the algorithm had a positive parallelization effect, and from looking at the data volume from different data sets, dataset 5 was larger than dataset 4, indicating that the algorithm had a better speedup ratio when the amount of data increased. Hence, the parallelisation of optimization algorithms based on Spark could effectively conduct big data analysis and processing.

Further, the CreditData data sets were utilized in the present study to conduct credit evaluation applications, and the manner for averaging the experimental results for multiple experiments was compared. The results are shown in Fig. 4. 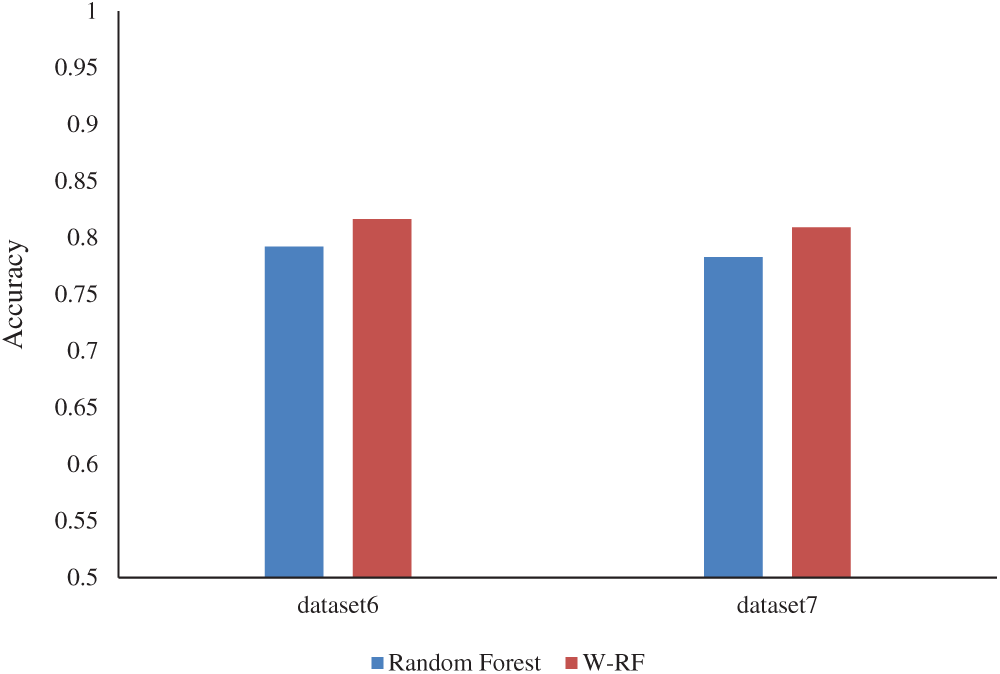 An observation can be made in Fig. 4 that compared with the random forest algorithm before optimization, the classification accuracy of the optimized random forest algorithm proposed in the present paper exhibited a significantly improvement in applying data sets in the field of credit evaluation, and could be effectively applied to the field of credit evaluation.

Acknowledgement: The author(s) received no specific help from somebody other than the listed authors for this study.

Funding Statement: This paper is partially supported by the Social Science Foundation of Hebei Province (No. HB19JL007), and the Education technology Foundation of the Ministry of Education (No. 2017A01020).