Abstract: HTTP Adaptive Streaming (HAS) of video content is becoming an undivided part of the Internet and accounts for most of today's network traffic. Video compression technology plays a vital role in efficiently utilizing network channels, but encoding videos into multiple representations with selected encoding parameters is a significant challenge. However, video encoding is a computationally intensive and time-consuming operation that requires high-performance resources provided by on-premise infrastructures or public clouds. In turn, the public clouds, such as Amazon elastic compute cloud (EC2), provide hundreds of computing instances optimized for different purposes and clients’ budgets. Thus, there is a need for algorithms and methods for optimized computing instance selection for specific tasks such as video encoding and transcoding operations. Additionally, the encoding speed directly depends on the selected encoding parameters and the complexity characteristics of video content. In this paper, we first benchmarked the video encoding performance of Amazon EC2 spot instances using multiple ×264 codec encoding parameters and video sequences of varying complexity. Then, we proposed a novel fast approach to optimize Amazon EC2 spot instances and minimize video encoding costs. Furthermore, we evaluated how the optimized selection of EC2 spot instances can affect the encoding cost. The results show that our approach, on average, can reduce the encoding costs by at least 15.8% and up to 47.8% when compared to a random selection of EC2 spot instances.

Nowadays, most Internet traffic represents multimedia content, such as live or on-demand audio and video streaming [1]. The streaming experience over the Internet depends on several factors like user location, network speed, traffic congestion, or end-user device, which significantly vary over time [2]. Streaming platforms and services use the HAS technology [3] to adapt to these bandwidth variations that provide video sequences in multiple bitrates. The resolution pairs are divided into short-term video and audio segments (e.g., 2 to 10 s), individually as requested by a client device depending on its technical conditions (e.g., screen size, network performance) in a dynamic, adaptive manner [4]. Client devices and video players use segment bitrate selection (or rate adaptation) algorithms to optimize the user experience [5,6]. The widely used MPEG-DASH HAS implementation allows streaming providers to choose from a set of codecs for video encoding due to its codec independent [3] characteristic, including Advanced Video Coding (AVC) [7], High-Efficiency Video Coding (HEVC) [8], VP9 [9], AOMedia Video 1 (AV1) [10] and Versatile Video Coding (VVC) [11]. However, encoding video segments for adaptive streaming is a computationally-intensive process that can take seconds or even days depending on many technical aspects, such as video complexity or encoding parameters [12] and typically requires expensive high-performance computers.

To decrease the encoding costs and maximize the utilization of Amazon EC2 spot instances, we propose a new method called the Fast approach for better utilization of Amazon EC2 Spot Instances for video encoding (FSpot) based on four phases: 1) instance benchmarking, 2) fast encoding time estimation, 3) instance set selection and 4) priority and numerical calculation. The first phase tests different EC2 instances using various encoding parameters, extracts the critical features from the video encodings and creates a dataset, and proposes a heuristic for selecting EC2 spot instances. The second phase uses a fast estimate of the encoding speed for videos on a master node hosted on an on-demand EC2 instance that splits video into segments, estimates the encoding time and distributes encoding tasks to worker nodes hosted on spot instances. The third phase selects the required number of EC2 spot instances recommended for optimized video encoding in the Amazon cloud. Finally, the last phase calculates the priorities and number for EC2 spot instances, such that those with the lowest predicted video encoding cost have the highest priority. We evaluated FSpot on a set of ten heterogeneous videos of different genres with different duration and frame rates using three AWS availability zones. Experimental results show that, on average, our model can reduce the encoding costs by at least 15.8% and up to 47.8% when compared to a random selection of EC2 spot instances.

The significant contributions of the FSpot work are:

2.    We developed a novel method for fast encoding time estimation of video segments and proposed an algorithm combining Pareto frontier and clustering techniques to find an appropriate set of spot instances.

Some recent remarkable works contributed to scheduling the video transcoding tasks [32–34]. Kirubha et al. [35] implemented a modified controlled channel access scheduling method to improve the quality of service-based video streaming. Similarly, Jokhio et al. [36] presented a distributed video transcoding method to reduce video bitrates. Li et al. [37] presented a QoS-aware scheduling approach for mapping transcoding jobs to heterogeneous virtual machines. Recently, Sameti et al. [38] proposed a container-based transcoding method for interactive video streaming that automatically calculates the number of processing cores that maintain a specific frame rate for any given video segment and transcoding resolution. The authors performed benchmarking to find the optimal parallelism for interactive streaming video. Li et al. [39] proposed a HAS delivery scheme that combines caching, transcoding for energy and resource-efficient scheduling. Ma [40] proposed a scheduling method for transcoding MPEG-DASH video segments using a node that managed all other servers in the system (rather than predicting the transcoding times) and reported a saving time of up to 30%.

First, we selected ten video sequences of different visual complexity from the publicly available dataset [12]. Fig. 1 shows the SI and TI metrics of the selected videos. The average TI and SI metrics confirm the varying video content complexity. We used video sequences that represent a wide range of possible visual scenes and use cases. Tab. 1 presents video categories (or genres) and critical file characteristics of original videos. Using the FFmpeg [42] software v4.1.3, we uncompressed all video sequences into raw Y4M format and divided them into 80 video segments of 4 s duration each. Typically, each segment is a switching point to other video representations. Therefore the segment length becomes an important parameter in HTTP Adaptive Streaming. The 4 s segments are widely used in real video streaming deployments because they show a good trade-off between encoding efficiency and video streaming performance [43]. 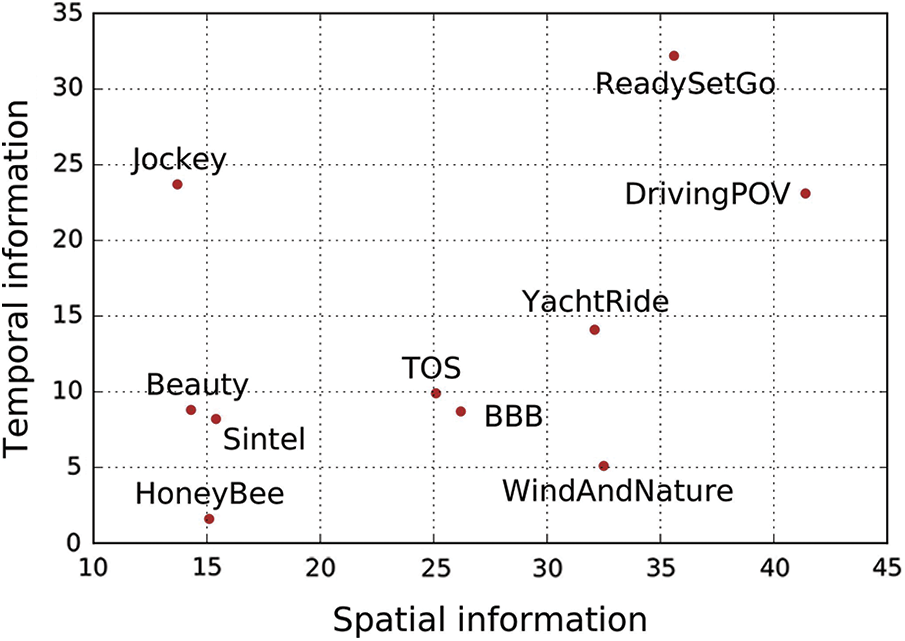 Let us assume we have over one hundred different spot instances to encode segments of a single video. Further, we only want to select the top N spot instances that will minimize the cost. Our work proposes a method that selects a set of computing units, for example, 5, for optimized video encoding. The main goal of this method is to reduce the number of computing units for further analysis quickly. We calculate the price ratio and the speed factor for each EC2 instance with respect to c5.2 × large base EC2 instance (see Tab. 5), as shown in Eqs. (1) and (2), respectively.

We then calculate the instance availability speed ratio as shown in Eq. (3).

We use a sample video file segment to calculate the encoding speed for the different Amazon EC2 instances. First, the system encodes a middle segment of a video sequence at the base node-the master node or the fastest available EC2 instance for a few seconds with selected encoding parameters. It then uses obtained encoding time data for the middle segment and instance availability speed ratio to estimate the encoding speed (in segments/sec) for different EC2 spot instances and video segments as shown in Eq. (5).

From our dataset, we extracted ×264 codec encoding times for the base EC2 instance (c5.2 × large) for middle segments and all unique combinations of encoding parameters for each video sequence. We then used the instance availability speed ratio to estimate the encoding speed for video segments on different EC2 spot instances. We only used the information about the encoding time of the middle segment on the base c5.2 × large EC2 instance. We can use our approach to make predictions for different video codecs, for example, for ×265. To do this, we need to automatically benchmark EC2 instances for the ×265 video codec and then use the results for the calculations. The output of this implementation phase is an array of estimated encoding speeds for different video segments j and EC2 spot instances i.

For each EC2 spot instance, we calculate the (i) instance availability speed ratio and (ii) price ratio and use them as input parameters for our Pareto-fronts and clustering model. We calculate different Pareto fronts between and for all selected EC2 spot instances and rank each front in ascending order (see Fig. 2).

We then apply K-means clustering on Pareto fronts points to form K clusters (see Fig. 2) such that the centroid of each cluster. 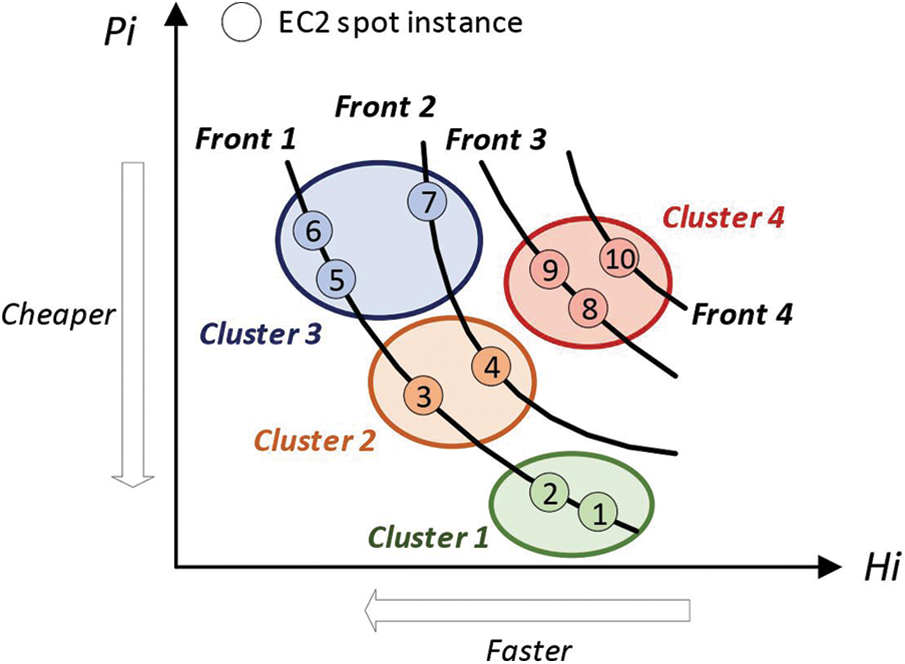 This phase only uses EC2 spot instances that belong to the set selected by Algorithm 1. First of all, we represent the constraints. We consider the disk speed and the network speed from the master node to a cluster of EC2 spot instances as two main parameters influencing segments’ distribution time. In actual encoding infrastructure, the open-source tool IPerf can be used to measure the network speed . The transmission speed of video segments is the minimum value between and , as shown in Eq. (7). 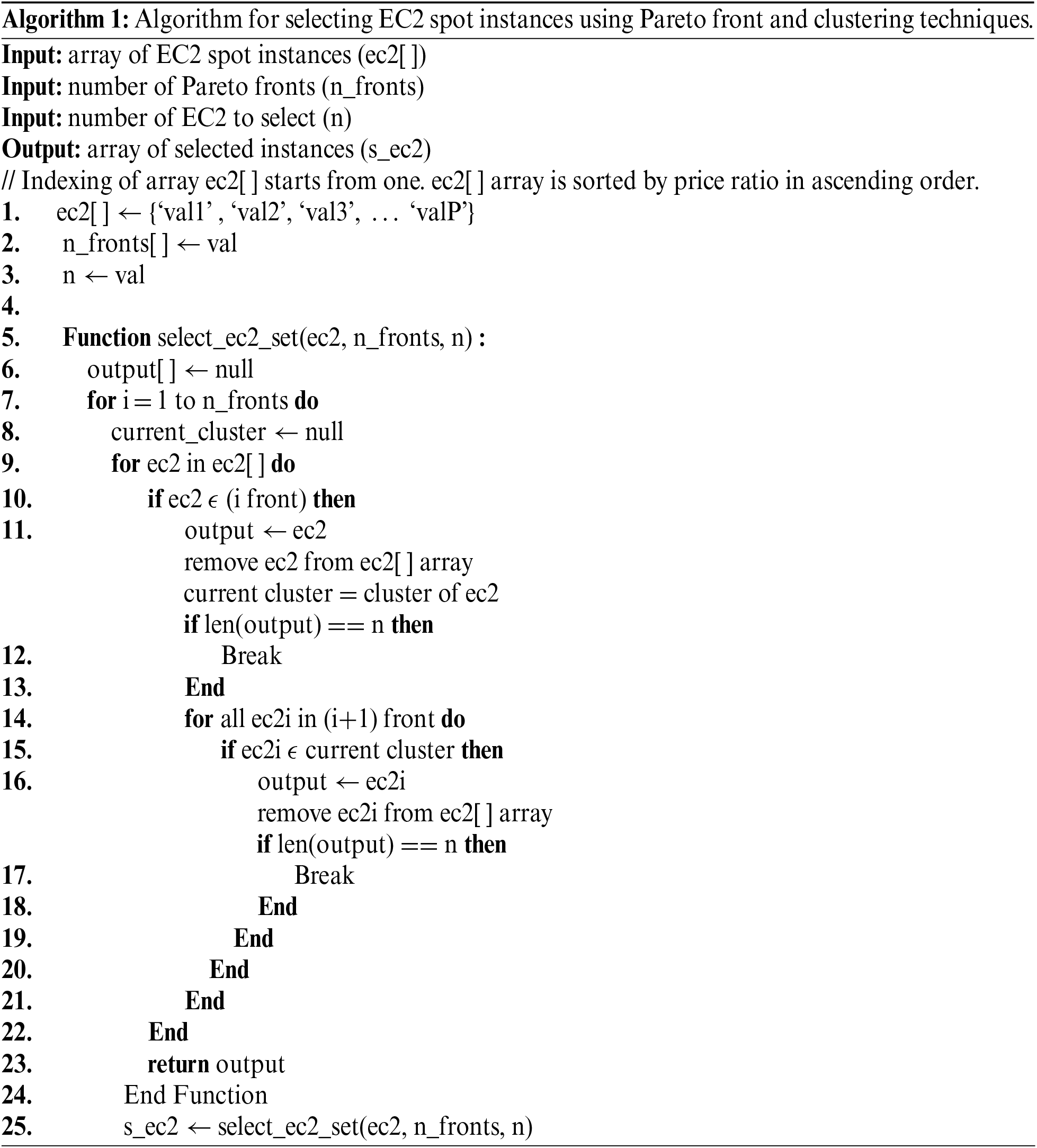 For continuous encoding of video segments on EC2 spot instances of type i, the following constraint must be met:

Finally, we check how the predicted encoding times and costs are correlated with actual values. The predicted priorities for the EC2 spot instance have to be correct for the actual and predicted values. 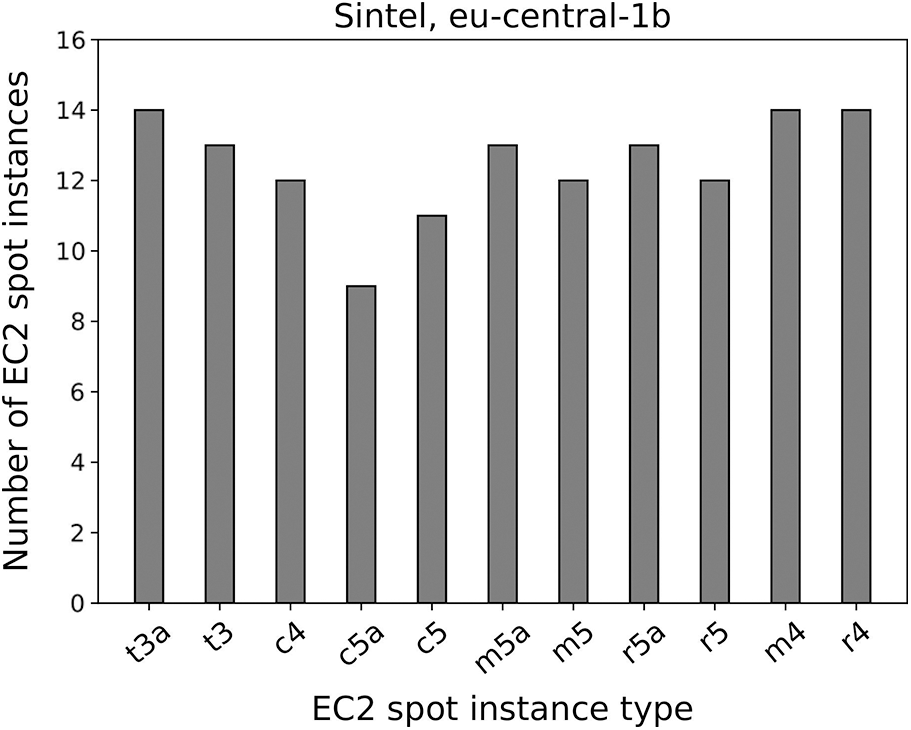 Figure 3: The calculated number of EC2 spot instances for the sintel video sequence 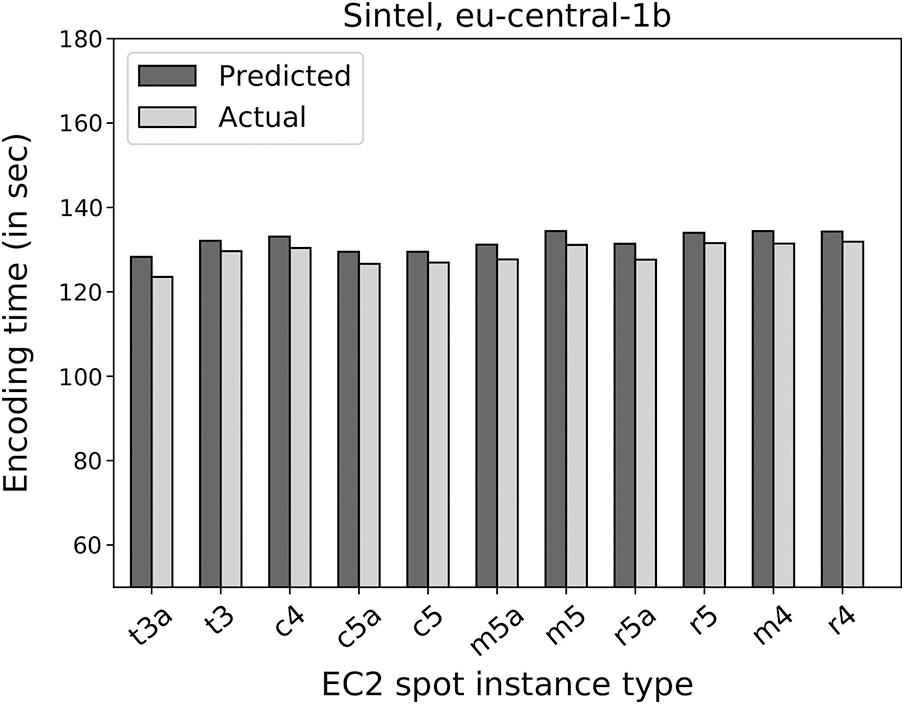 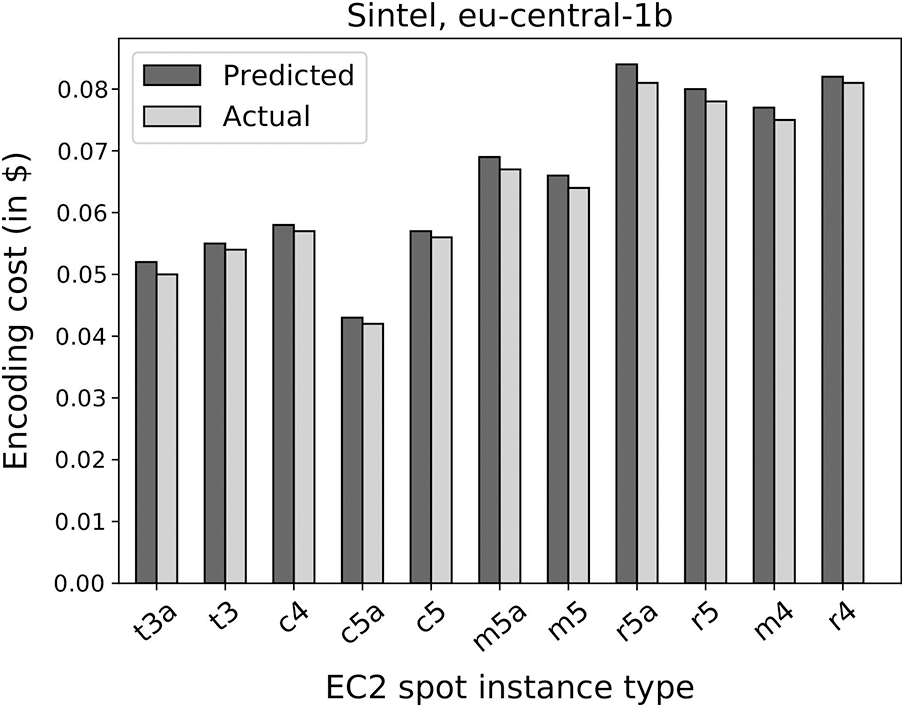 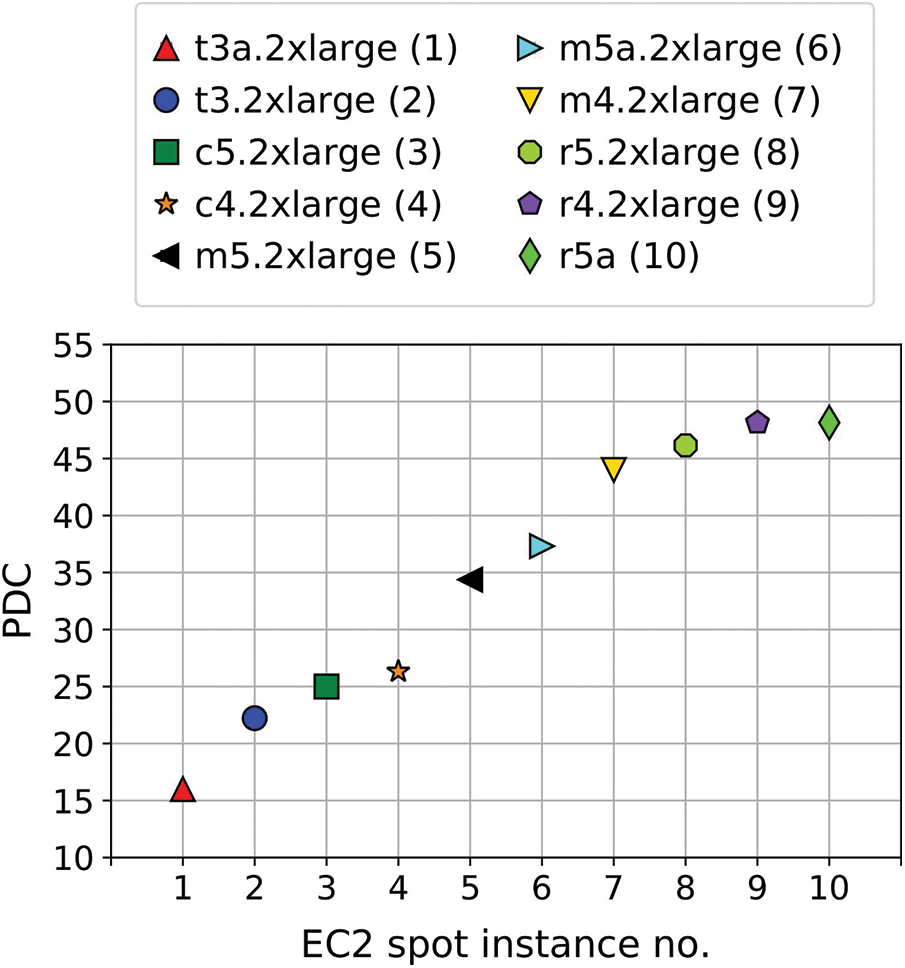 We proposed the FSpot method by combining the Pareto front with clustering techniques to optimize the AWS EC2 spot instance selection for encoding tasks allocation to minimize the encoding costs. Our model, on average, can reduce encoding costs by at least 15.8% and up to 47.8% compared to the random approach. FSpot can be customized and applied to the Google Cloud, and Microsoft Azure platforms with their own spare compute capacity instances. Deploying our model in an existing encoding infrastructure requires the development of an application programming interface. The encoding infrastructure will interact via the API with the model to calculate the predictions for upcoming encodings.

We plan in the future to extend our method for predicting the encoding time using multiple video codecs on different cloud computing instances and infrastructures. We will test our model on ARM and GPU processing instances in the cloud. In addition, we plan to develop an intelligent scheduler and auto-tuner to automate the process of optimized video encoding in the cloud.

Funding Statement: This work has been supported in part by the Austrian Research Promotion Agency (FFG) under the APOLLO and Karnten Fog project.