Abstract: Traditional Wireless Sensor Networks (WSNs) comprise of cost-effective sensors that can send physical parameters of the target environment to an intended user. With the evolution of technology, multimedia sensor nodes have become the hot research topic since it can continue gathering multimedia content and scalar from the target domain. The existence of multimedia sensors, integrated with effective signal processing and multimedia source coding approaches, has led to the increased application of Wireless Multimedia Sensor Network (WMSN). This sort of network has the potential to capture, transmit, and receive multimedia content. Since energy is a major source in WMSN, novel clustering approaches are essential to deal with adaptive topologies of WMSN and prolonged network lifetime. With this motivation, the current study develops an Enhanced Spider Monkey Optimization-based Energy-Aware Clustering Scheme (ESMO-EACS) for WMSN. The proposed ESMO-EACS model derives ESMO algorithm by incorporating the concepts of SMO algorithm and quantum computing. The proposed ESMO-EACS model involves the design of fitness functions using distinct input parameters for effective construction of clusters. A comprehensive experimental analysis was conducted to validate the effectiveness of the proposed ESMO-EACS technique in terms of different performance measures. The simulation outcome established the superiority of the proposed ESMO-EACS technique to other methods under various measures.

Recently, Wireless Multimedia Sensor Network (WMSN) has become the most preferred technological advancement to be incorporated in monitoring, surveillance and control applications under several scenarios that include public security, industrial automation, visual surveillance, health assistance, traffic control, etc. [1]. With cost-effective sensing and wireless techniques, WMSN has been developed to function in distinct network architectures with the incorporation of internet service in application-specific networks [2–4]. Internet of Things (IoT) concept has been conceived in the context of convergent communication in which the conventional internet values are fused into Wireless Sensor Network (WSN). WMSN is composed of source nodes that continuously stream or define the period of time. In this case, huge volumes of data may flow via the network towards sink node.

In Ad Hoc networks that are comprised of lower-rate wireless personal range network technique, namely IEEE 802.15.4 Medium Access Control (MAC) protocol [5], massive quantities of packets cannot be transmitted owing to low bandwidth. Furthermore, several packets might get communicated via Ad Hoc paths which quickly drains the energy in Sensor Nodes (SNs) [6]. In largescale networks, when each and every node has to transmit the information to their corresponding terminus, it expends the energy quickly due to long distance, huge quantity of information, and multiple-hop nature of the transmission [7]. In addition to these, this sort of data dissemination may also result in network disagreement. Clustering is a typical method used to accomplish scalable and efficient control in networks [8] while it has various advantages to its credit; it enables the distribution of control through network; stores energy; and minimizes network contention by allowing the locality of transmission. The nodes communicate the information through a short distance to the corresponding Cluster Head (CH). The CH aggregates this information into a small group of useful data [9,10]. Fig. 1 displays the infrastructure of WMSN. 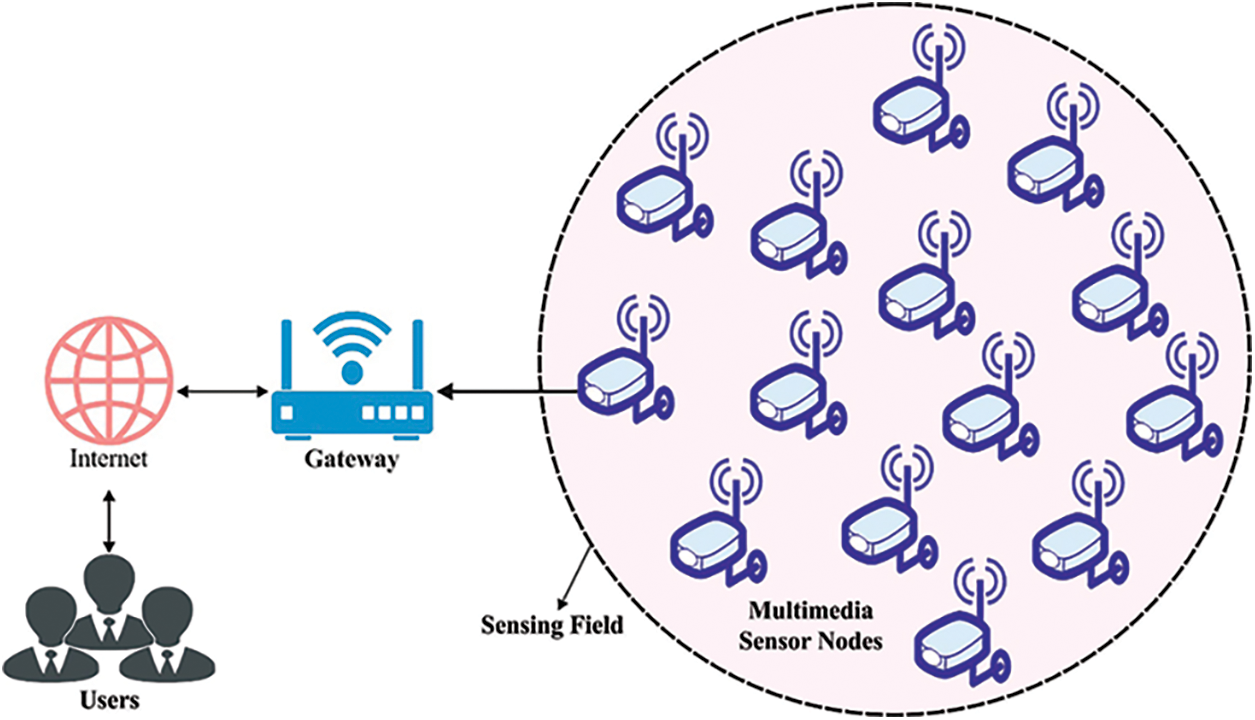 Kadiravan et al. [11] aimed at achieving minimal count of energy deployment in their study. The existing investigation work presented a novel Density-Based Clustering (DBC) approach to achieve energy efficiency in WMSN. DBC method was mostly utilized for data collection in healthcare environment and is mostly dependent upon three input parameters such as node centrality, Residual Energy (RE) level, and distance. Besides, two static data collector points named ‘Super Cluster Head (SCH)’ were also located. Yazici et al. [12] presented a fusion-based WMSN structure which decreases the count of data broadcasted on network through intra-node processing. This infrastructure explored three important problems: (1) the proposal of WMSN node in the detection of objects using Machine Learning (ML) approaches; (2) this technique helps in enhancing the accuracy while reducing the count of data transmitted by WMS node to Base Station (BS), and; (3) a novel cluster-based routing technique to WMSN which utilizes less power than the existing techniques. In literature [13], Randomized Boltzmann ML Clustering Algorithm (RBMLCA) was projected with randomized technique. It contains optimized Quality of Service (QoS) parameters, clustering of nodes, and CH development. In this altered clustering method to broadcast the data on multimedia sensor network, RBMLCA approach achieved the optimum quality of evolution.

In the study conducted earlier [14], the researchers proposed to increase the lifespan of WMSN network by reducing energy utilization of multimedia data broadcast. In order to accomplish this, an optimum broadcast radius to transfer the sensor node and suitable election of optimum CH at all the rounds were combined with energy utilization method so as to determine the best cost model. Afterward, a novel hybrid optimized method named NC-GSO was developed by hybriding Glowworm Swarm Optimization (GSO) and Dragonfly Algorithm (DA). In literature [15], the researchers proposed a method to minimize four distinct objectives such as delay, packet loss, memory, and the expected broadcast cost. An essential purpose of multi-objective function is to create different optimum solution sets that are employed for evaluating the trade-off amongst distinct objectives.

In SMO approach [16], Food Seeking Procedure (FSP) characteristics of spider monkeys are employed with Fission-Fusion Social Structure (FFSS). The four stages of the process are given below.

•   The position of Local Leader (LL) is upgraded

•   The optimum location is upgraded by GL

Large groups are separated into many small groups while GL Limit (GLL) and LL Limit (LLL) are taken into account to determine the optimum location.

whereas, denotes the population distribution function, ‘’ signifies the spider monkey at location ‘’, ‘’ characterizes the arbitrary value within [0, 1] and ‘p’ denotes the possibility rate. Furthermore, fitness rate is calculated for all the solutions and ‘S’ with optima fitness rate is chosen as LL. The searching space is processed based on subsequent stages.

Here, the position of each object is upgraded on the basis of GL and local members. Now, the novel location is evaluated as given herewith.

In which, represents the GL in ‘d’th location. It can be processed by calculating the possible rate with Fitness Rate (FR). 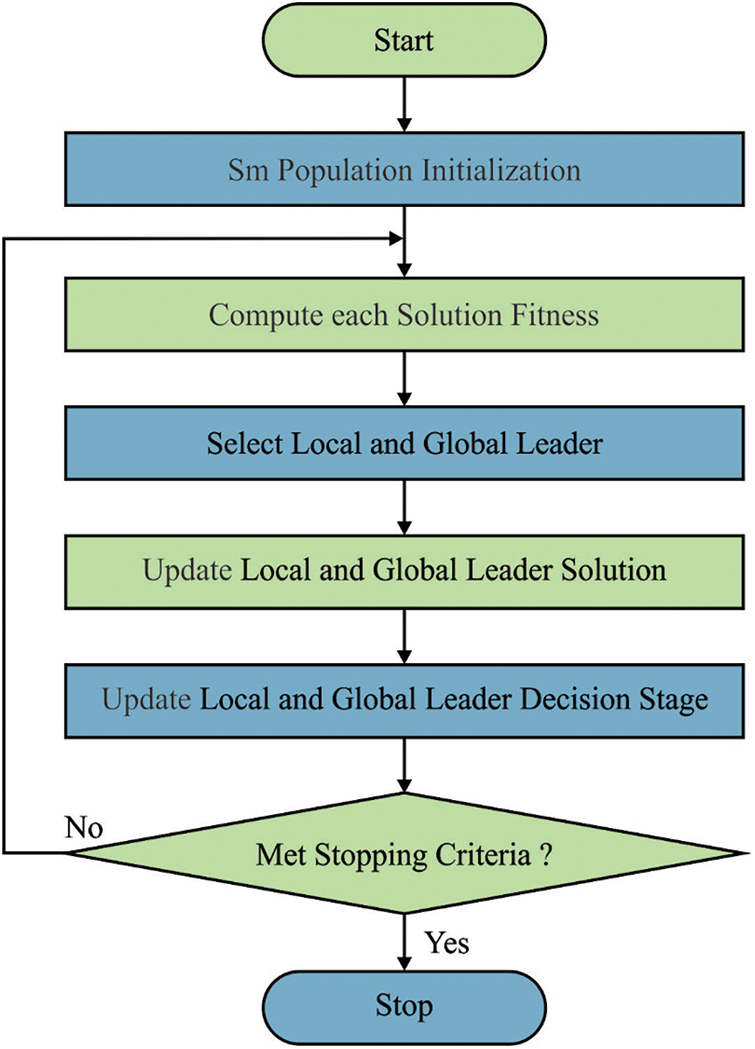 The member with BFV is chosen as LL and upgraded. If the LL location is not upgraded, then the global optimal solution can be increased to 1.

When the number of LL is higher than LL, the position of each object is upgraded and the novel location of spider monkey can bedetermined as follows.

In this phase, the overall population is separated into small groups, once the amount of global members is higher than GLL. Once the location of GL is not upgraded, then GL connects and frames a single group.

In order to improve the efficiency of SMO, ESMO method is acquired by quantum computing model. It could be a process of computing component that alters the method based on quantum theory as quantum entanglement, quantum measurement, and state superposition. The two fundamental states and make a qubit that is established as a linear incorporation of both states as shown below.

The rotation gate is illustrated by mutation operation in order to create a quanta technique-amended solution and it finally determines the global optimum solution [17]. The rotation gate can be described below.

, symbolizes the rotation angle of qubit, however, and characterizes the size and direction of rotations.

Degree, RE, and distance are assumed to be ineffectual CH Selection (CHS). The sensor node (SN) with maximal RE and degree with minimal distance is deemed to be CHS [18].

The RE of SNs (x), whereas communicating k bits to destination SN (y) on distance is expressed as follows.

whereas E represents the current energy of SNs and refers to the energy utilized to sense the data.

Here, signifies the energy of electrons and stands for the much-needed amplified energy, defines the energy dissipated for receiving the data and is demonstrated as follows

The most important parameter for CHS is Average distance (AvgD) to neighboring SN. AvgD signifies the average of distance values to SNs to its single hop adjacent SN that is defined as follows.

whereas refers to the distance in SN to neighboring SN. Their neighbor

For time sample the degree of SNs signifies the count of neighboring nodes which occur from SN. It is formulated as follows.

In which , and denotes the distance between two SNs and , refers to the broadcast range of SNs. 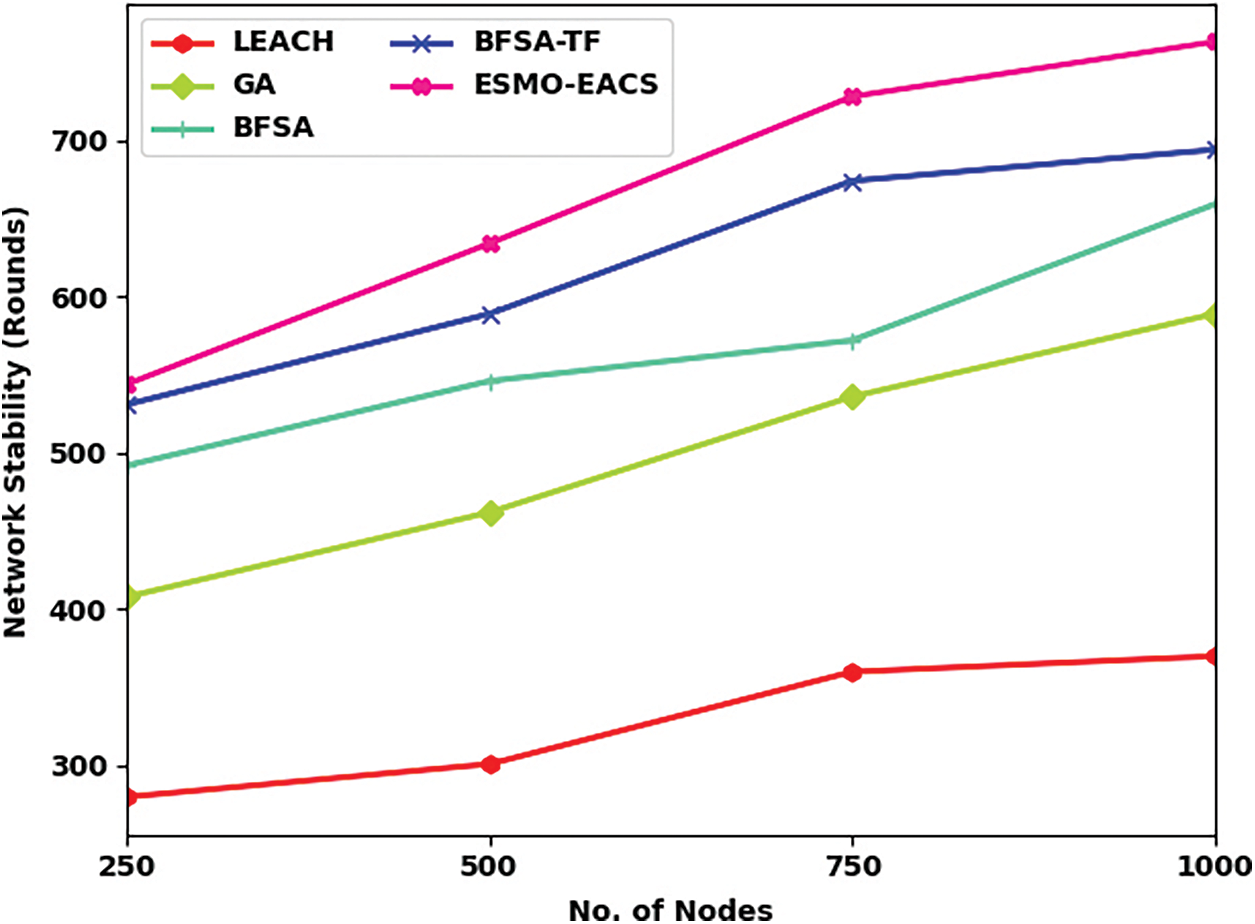 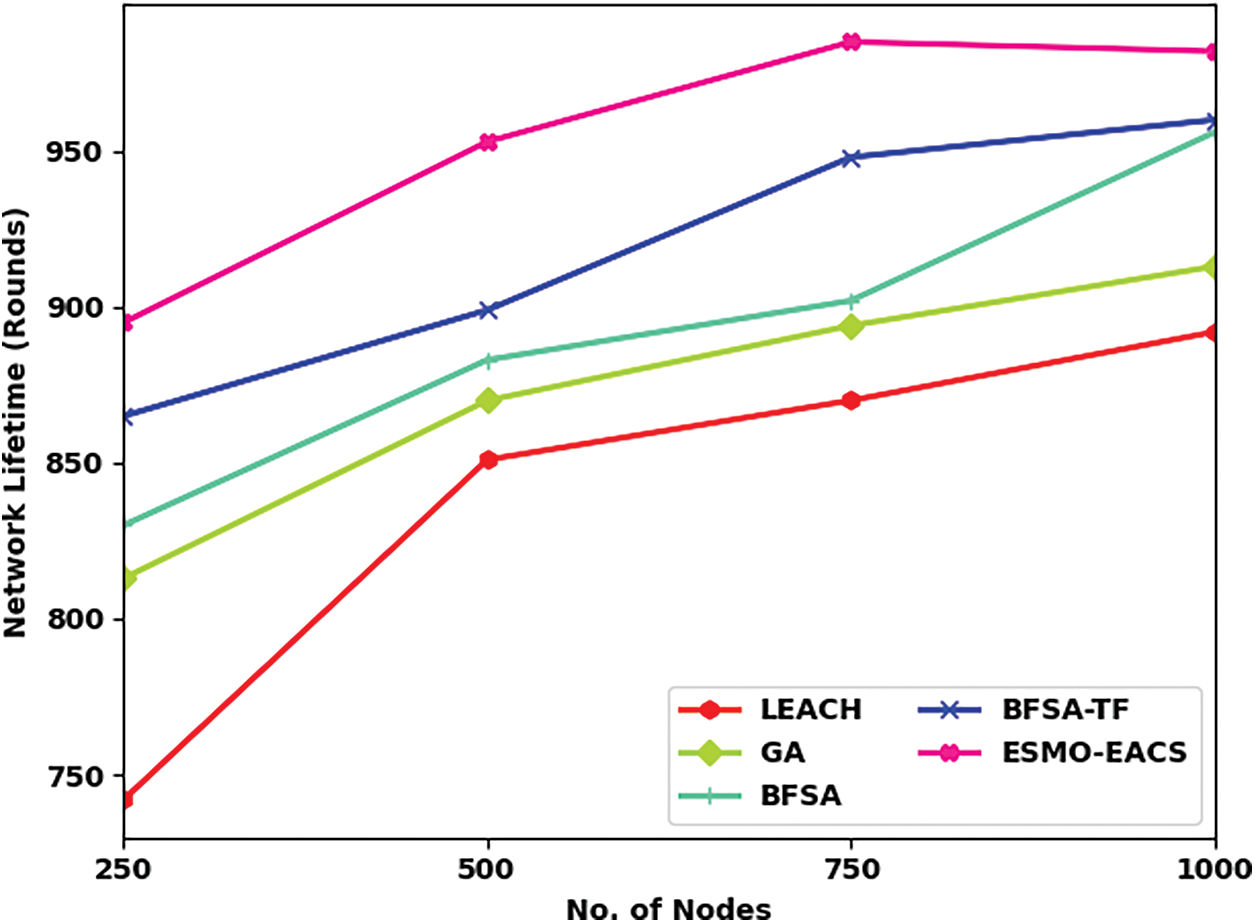 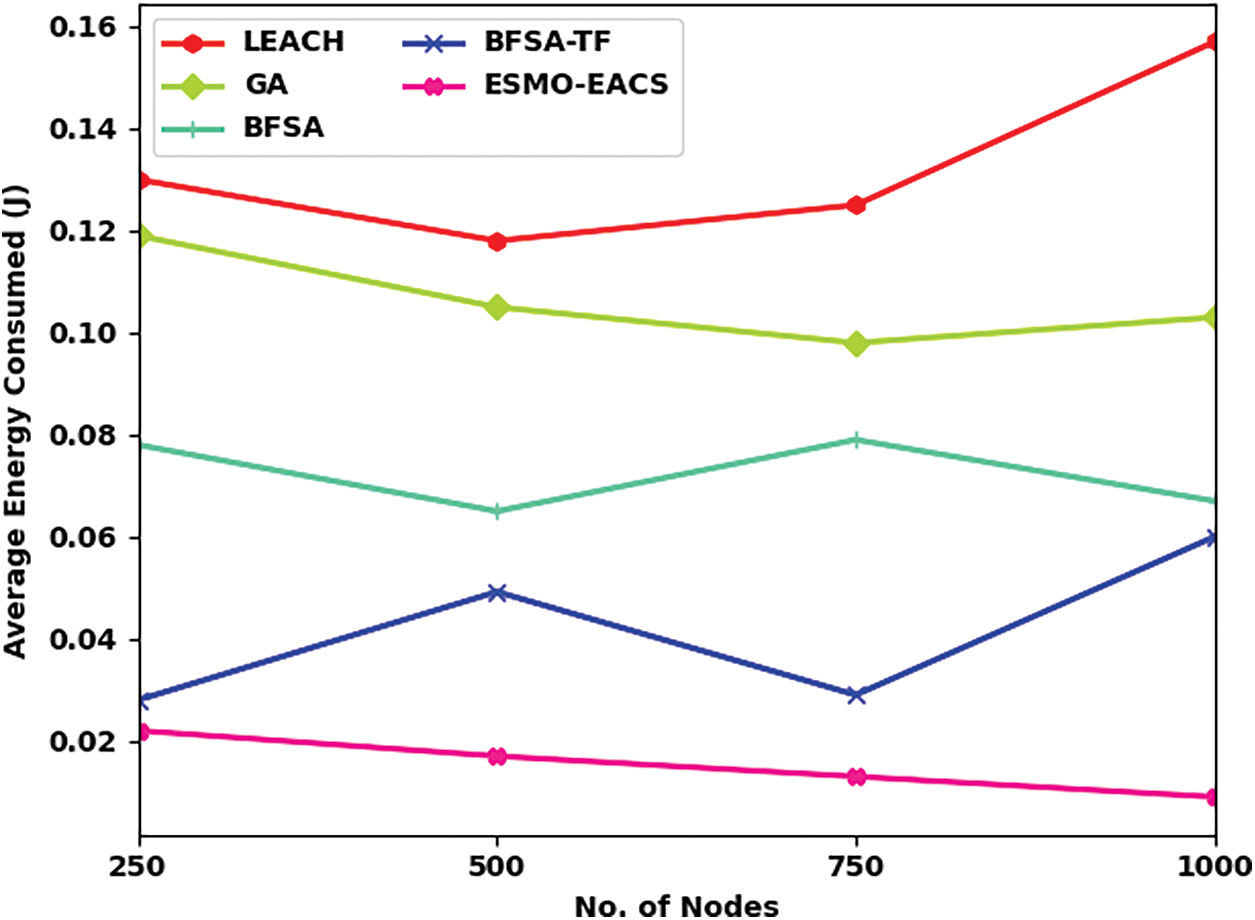 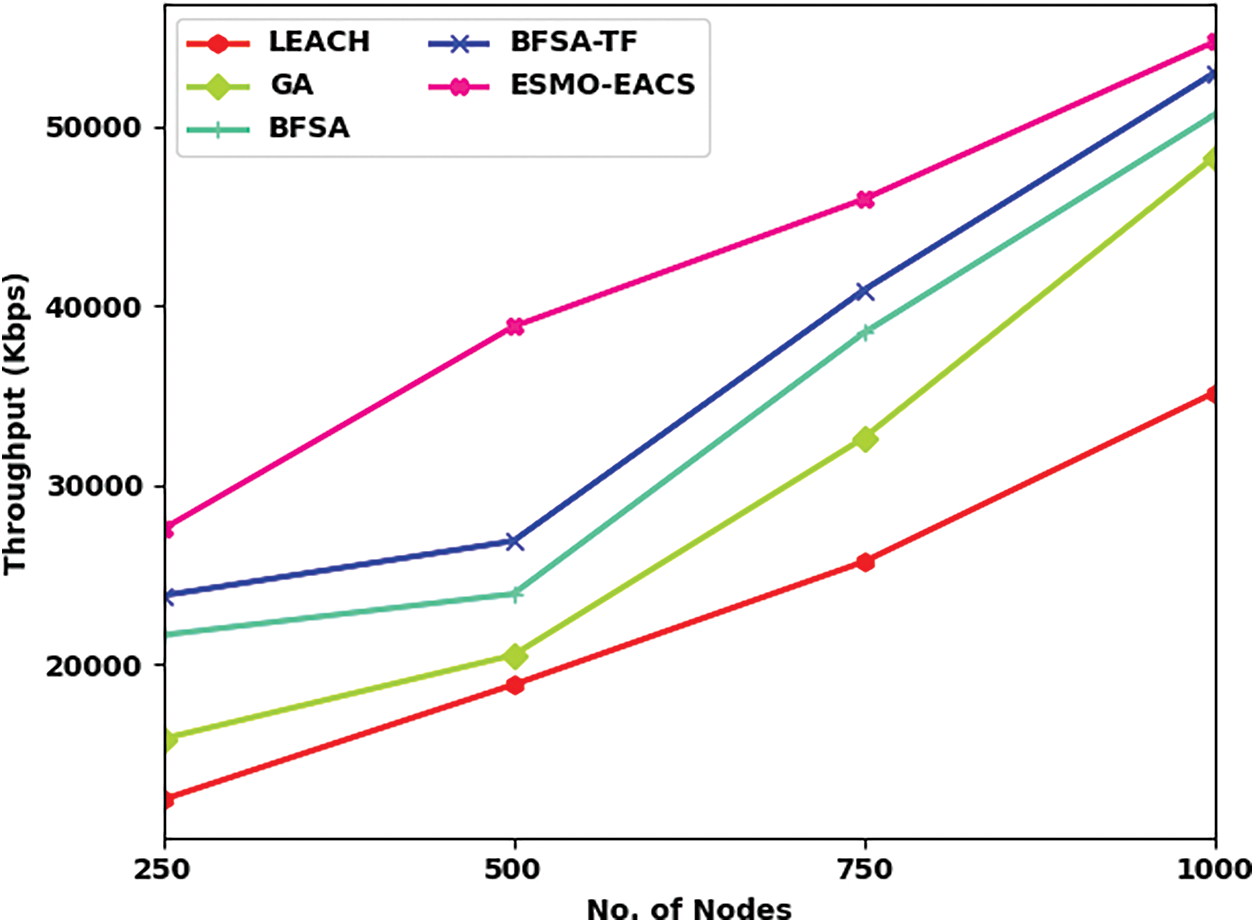 Tab. 5 and Fig. 7 illustrate the comparative Packet Delivery Ratio (PDR) analysis results accomplished by ESMO-EACS and other models under several nodes. The results convey that the proposed ESMO-EACS model attained the maximum performance with improved PDR than other approaches. For sample, on 250 nodes, ESMO-EACS model obtained a superior PDR of 0.96 rounds, while LEACH, GA, BFSA, and BSFA-TF models obtained the least PDR values such as 0.90, 0.91, 0.92, and 0.94 correspondingly. Moreover, on 1000 nodes, the proposed ESMO-EACS model accomplished an increased PDR of 0.94 rounds, whereas LEACH, GA, BFSA, and BSFA-TF techniques achieved the least PDR values such as 0.87, 0.89, 0.90, and 0.91 rounds respectively. 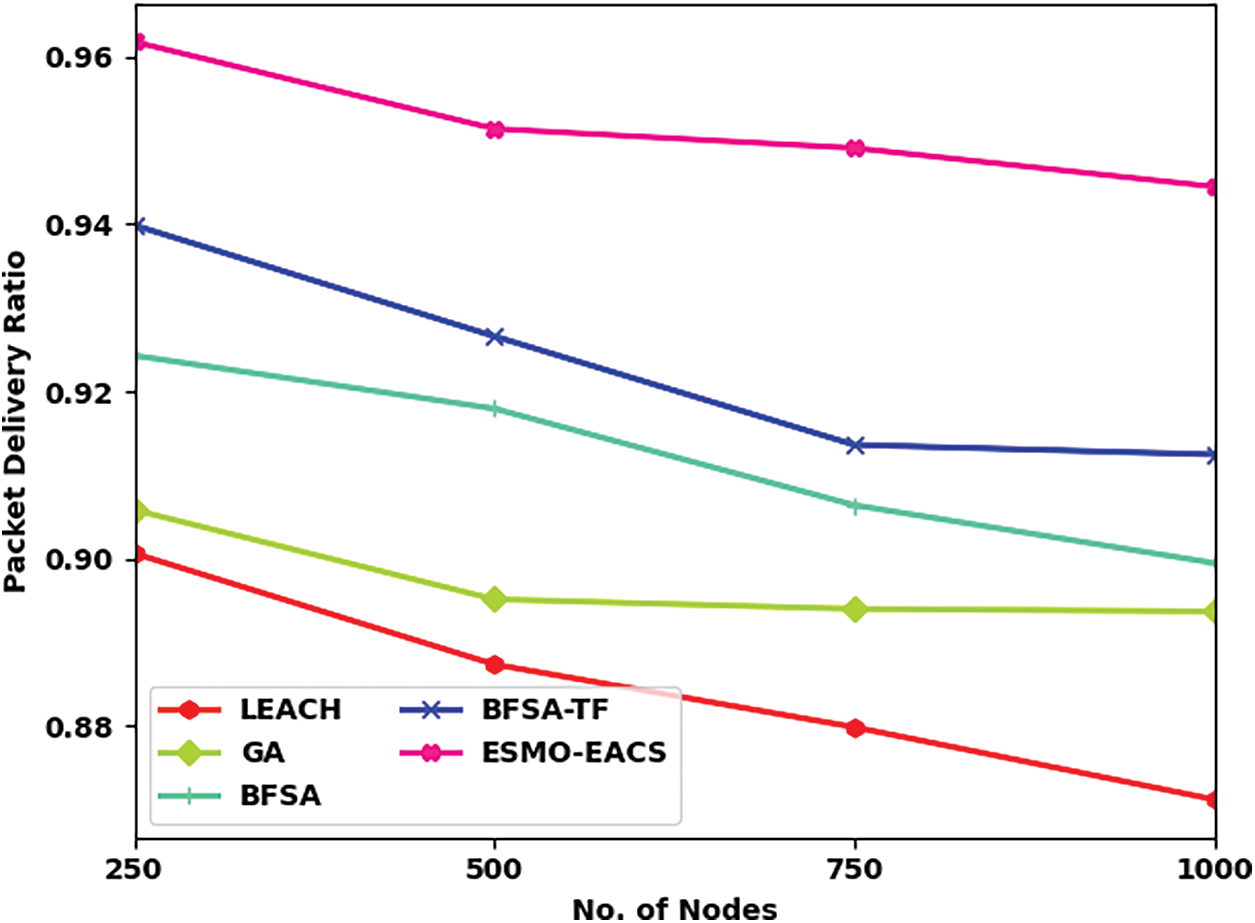 Based on the results achieved from comprehensive comparative analyses, it is evident that the proposed ESMO-EACS model gained effectual outcomes over other methods. 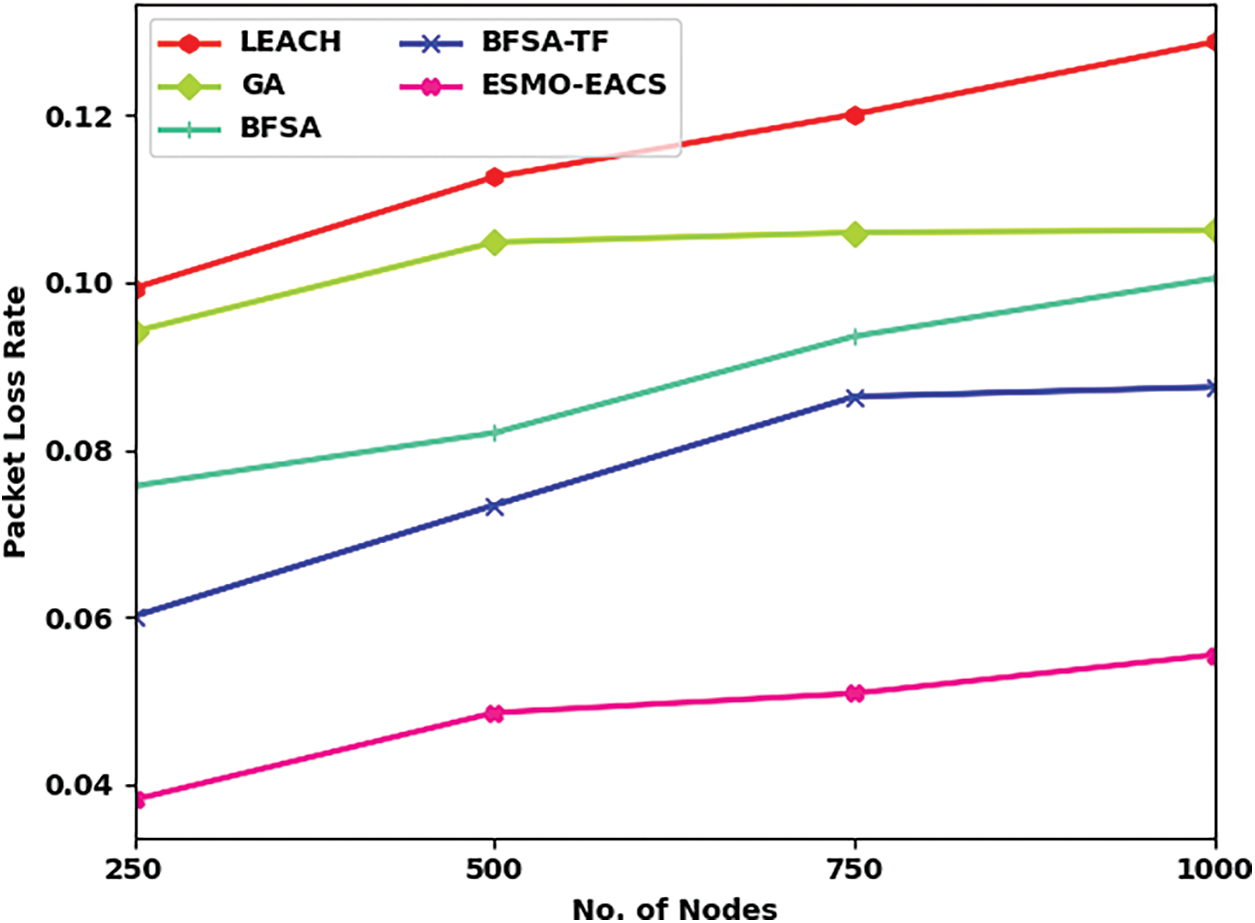 Funding Statement: This work was supported by the Ulsan City & Electronics and Telecommunications Research Institute (ETRI) grant funded by the Ulsan City [22AS1600, the development of intelligentization technology for the main industry for manufacturing innovation and Human-mobile-space autonomous collaboration intelligence technology development in industrial sites].