A large number of physical and theoretical problems arise in various fields of mathematical, physical and engineering sciences which can be formulated as a non-linear equation:

The most primitive and popular iterative technique for approximating single root of Eq. (1) is Newton’s method [1] (abbreviated as NM) having local quadratic convergence.

In the year 2016, Nedzhibov et al. [2] presented inverse method (abbreviated as INM) corresponding to method Eq. (2) given as:

In the last few years, lot of work has been done on those numerical iterative methods which approximate single root at a time. Besides these methods in literature, there is another class of derivative free iterative schemes which approximate all roots of Eq. (1) simultaneously. These methods are very popular due to their global convergence and parallel implementation on computer (see, e.g., Weierstrass’ [3], Cholakov et al. [4], Ivanov [5], Kyncheva [6], Mir et al. [7], Proinov [8], Shams et al. [9], Farmer [10] and reference cited there in [11–13]).

Among derivative free simultaneous methods, Weierstrass-Dochive method (abbreviated as WDK) is the most attractive method given by:

is Vietas formula for monic polynomial.

Here, we propose the following methods by replacing

In this section, we prove third order convergence of the methods IWKM1 and IWKM2.

be an open convex subset,

be continuous and the sequence

Then, for any x,y

Using Theorem 1, we have:

such that for any

then (ii) and Theorem 1 implies:

Using above relation for

Thus, from last inequality, the convergence order of

For a fixed point

, it is not difficult to prove

and higher order partial derivative is not equal to zero. Thus, IWKM1 has at least third order convergence.

be simple roots of Eq. (1) and for sufficiently close initial distinct estimations

of the roots respectively, IWKM2 then has convergence order 3.

be the errors in

respectively. From the first-step of IWKM2, we have: 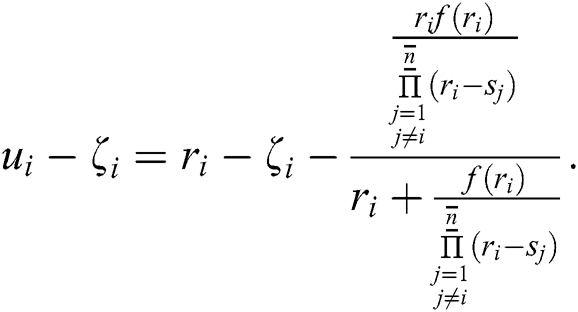 If we assume all error are of the same order, i.e.,

and the first components of

simultaneously. In order to verify conditions of Theorem 2, we have to express the differential of an operator

in terms of their partial derivate of its component as

The lower bound of the convergence is obtained until the first non-zero element of row is found. The Mathematica codes are given for each of the considered methods as:

To provoke the basins of attraction of iterative schemes NM, INM, WDK, INHB, INHH, IWKM1, IWKM2 for the roots of non-linear equation, we execute the real and imaginary parts of the starting approximations represented as two axes over a mesh of

in complex plane. We use

as a stopping criteria or maximum number of iterations as 5 due to wider convergence region of simultaneous methods. We allow different colors to mark to which root the iterative schemes converge and black in other cases. Color brightness in basins shows less number of iterations. For the generation of basins of attraction, we consider a non-linear polynomial equation 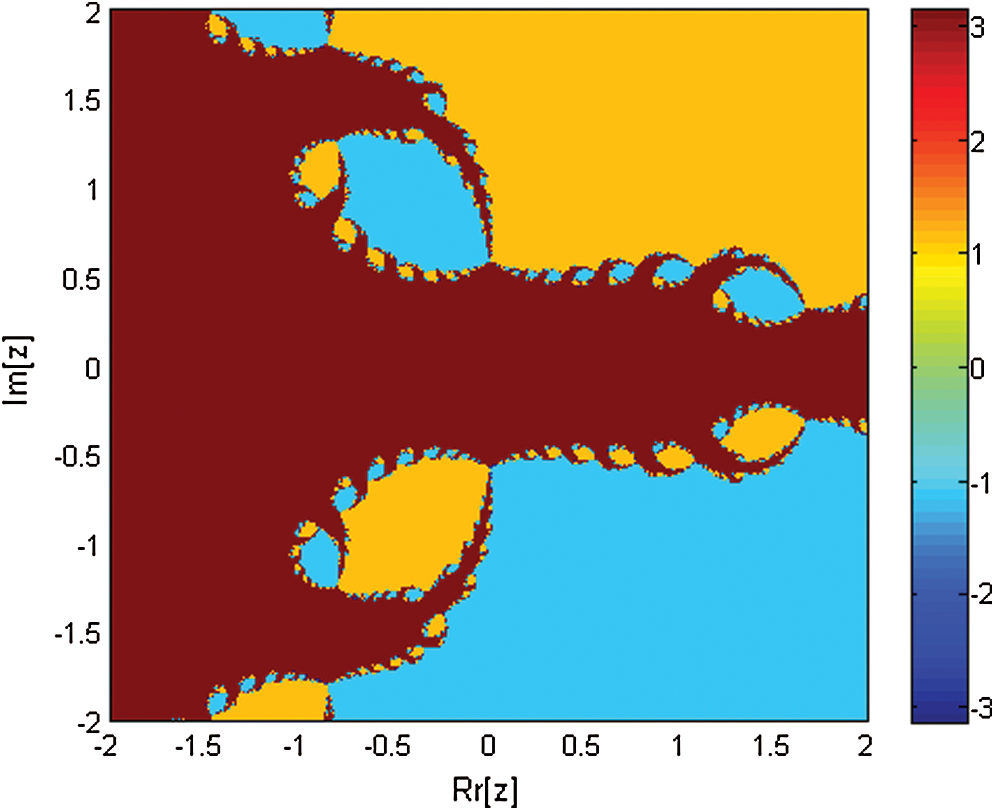 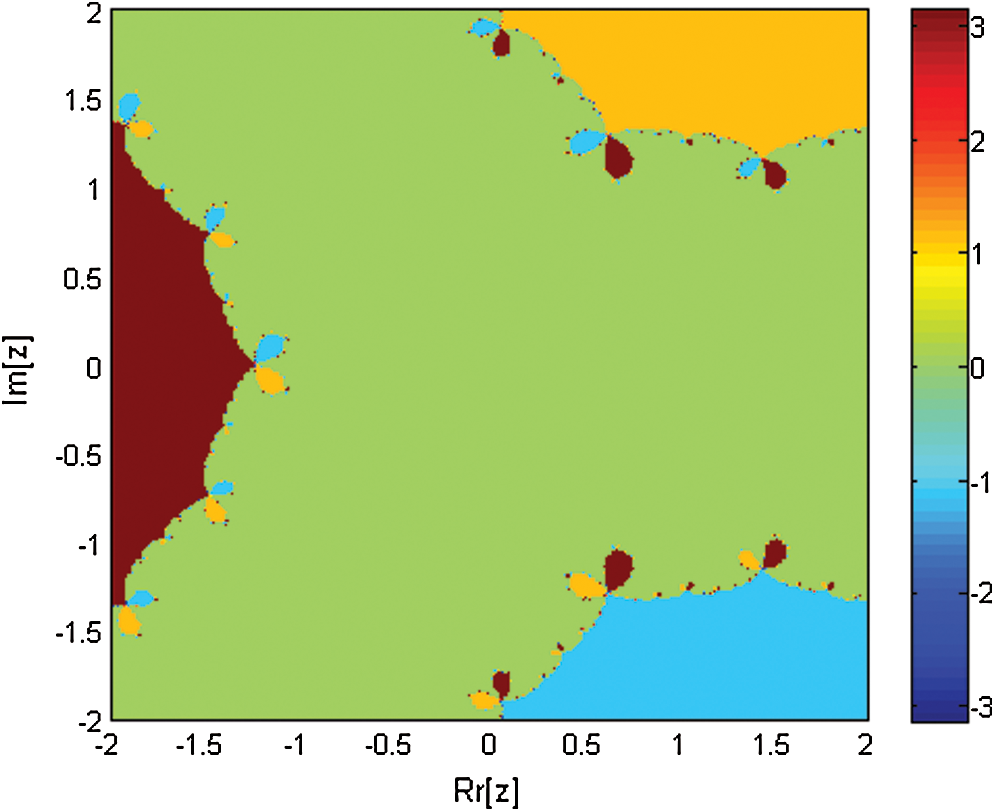 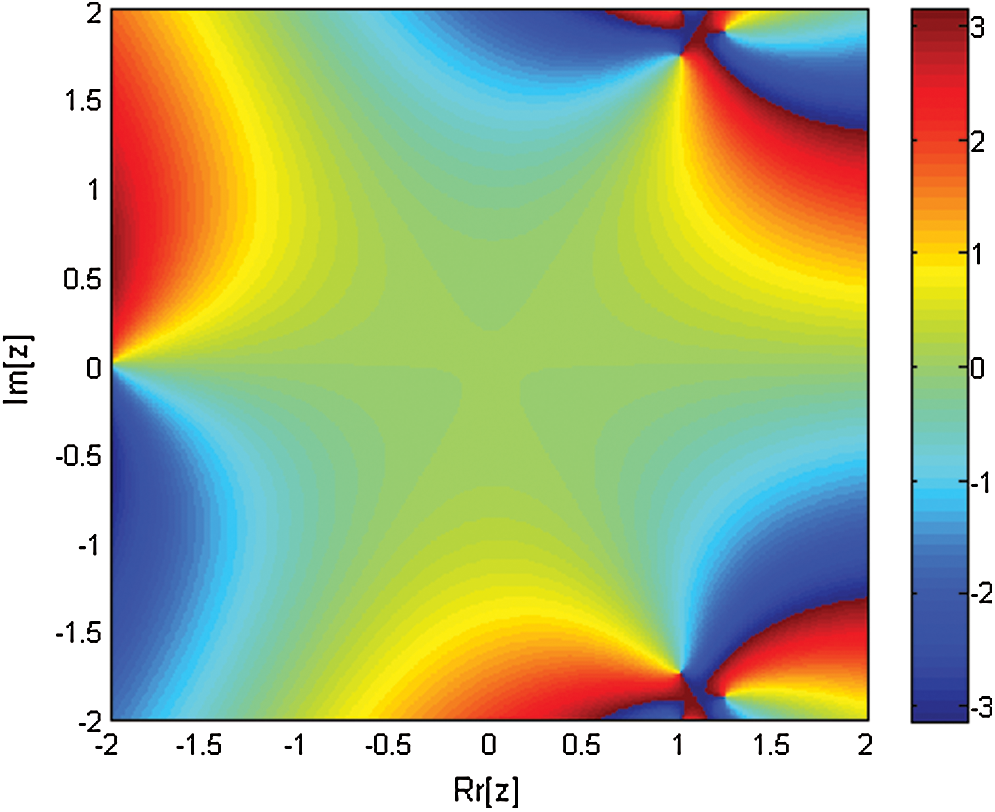 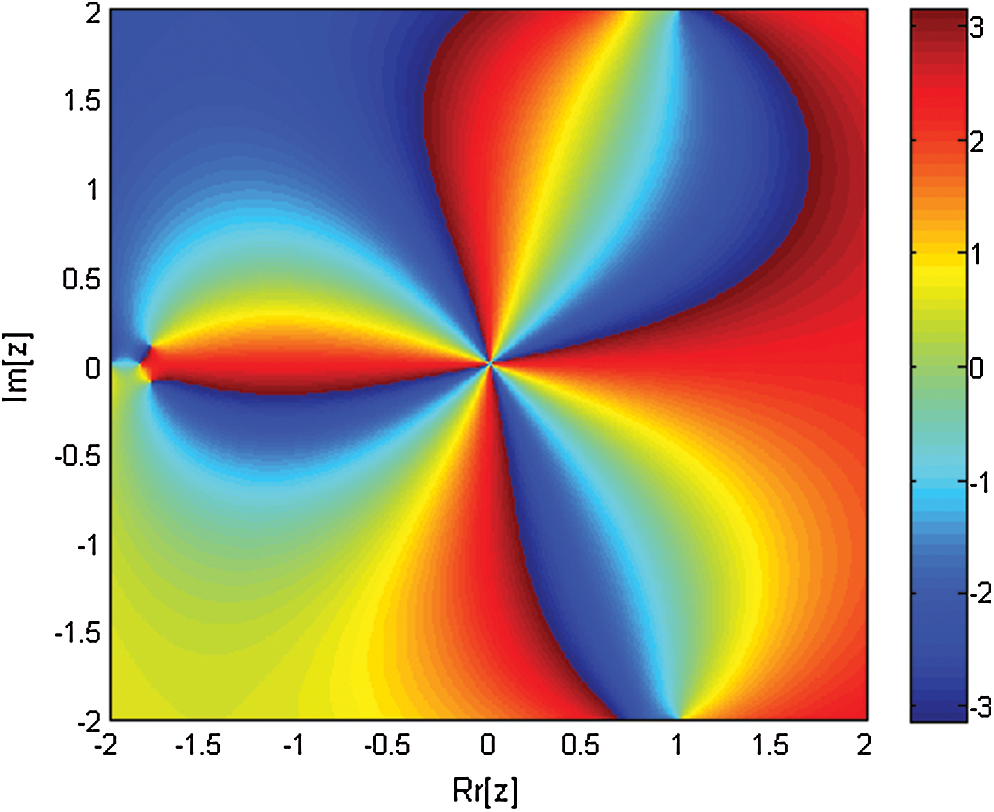 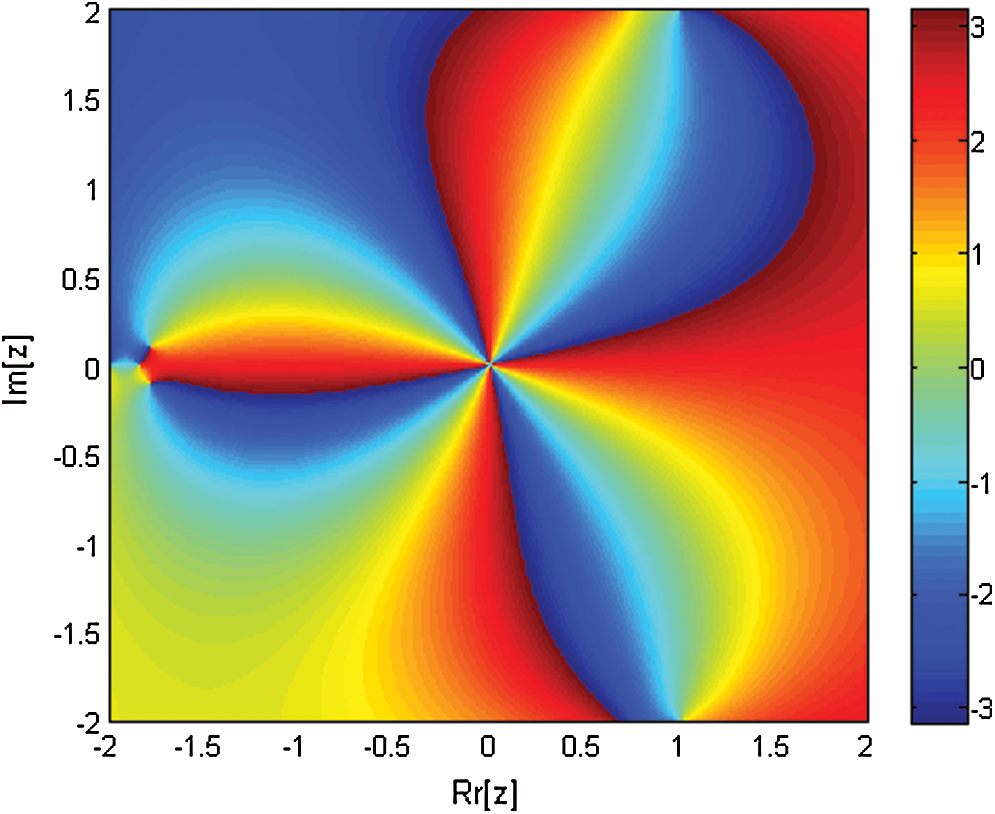 The basins of attraction of single root finding iterative schemes NM and INM are shown in Figs. 1 and 2. The basins of attraction of simultaneous iterative schemes WDK, INHB, INHH, IWKM1 and IWKM2 are presented in Figs. 3–6 and Fig. 7 respectively. The elapsed time from Tab. 1 and brightness in color in Figs. 6 and 7 show the dominance behavior of IWKM1 and IWKM2 as compared to NM, INM, WDK, INHB and INHH respectively.

Some non-linear models from engineering and applied sciences are considered to illustrate the performance and efficiency of WDK, INHB, INHH, IWKM1 and IWKM2. All calculations are done with 64 digits floating point arithmetic. The following stopping criteria are used to terminate the computer program:

represents the absolute error and

is the fractional conversion of nitrogen, hydrogen feed at 250 atm and 227k.

The initial calculated values of Eq. (17) have been taken as:

Table 2: Simultaneous determination of all roots of 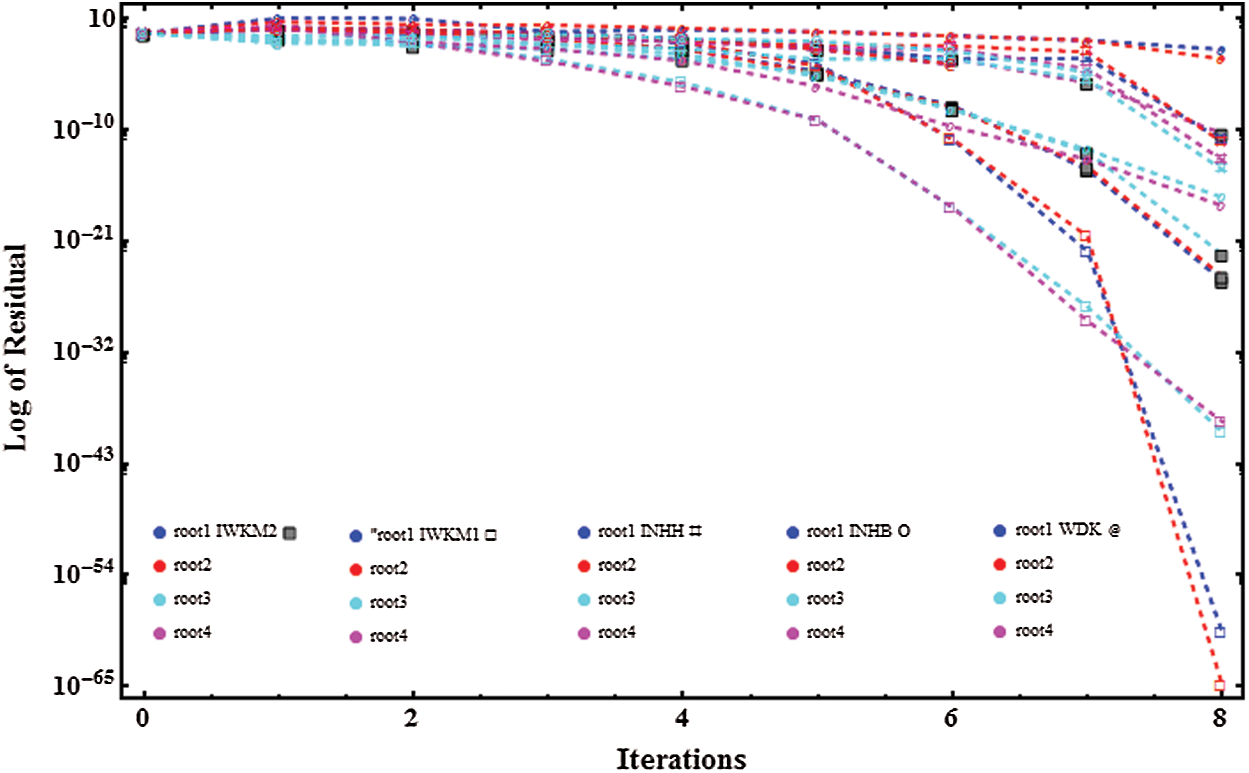 Problem of beam positioning [16], results a non-linear function as:

The initial calculated values of Eq. (18) have been taken as:

Table 3: Simultaneous determination of all roots of 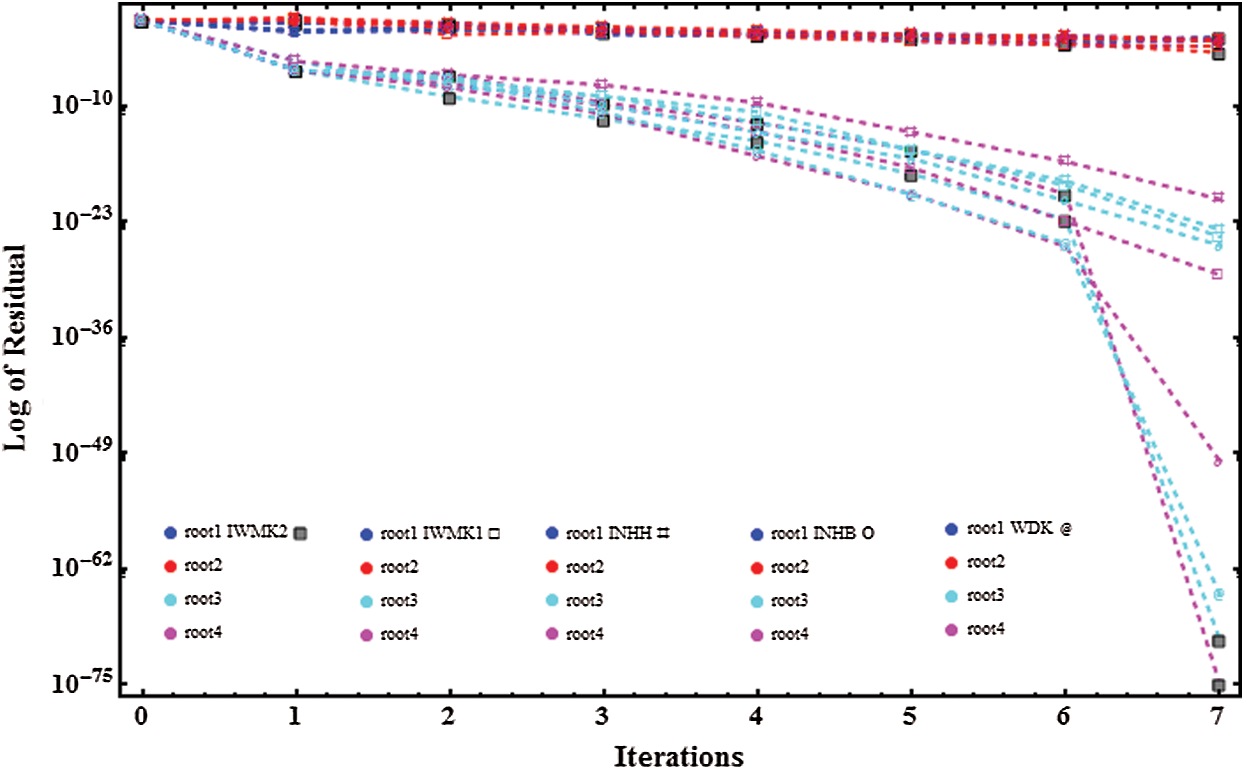 In Predator-Prey model, predation rate is denoted by

where r is number of aphids as preys [17] and lady bugs as a predator. Obeying the Malthusian Model, the growth rate of aphids is defined as

. To find the solution of the problem, we take the aphid density for which

The initial estimates for

Table 4: Simultaneous determination of all roots of 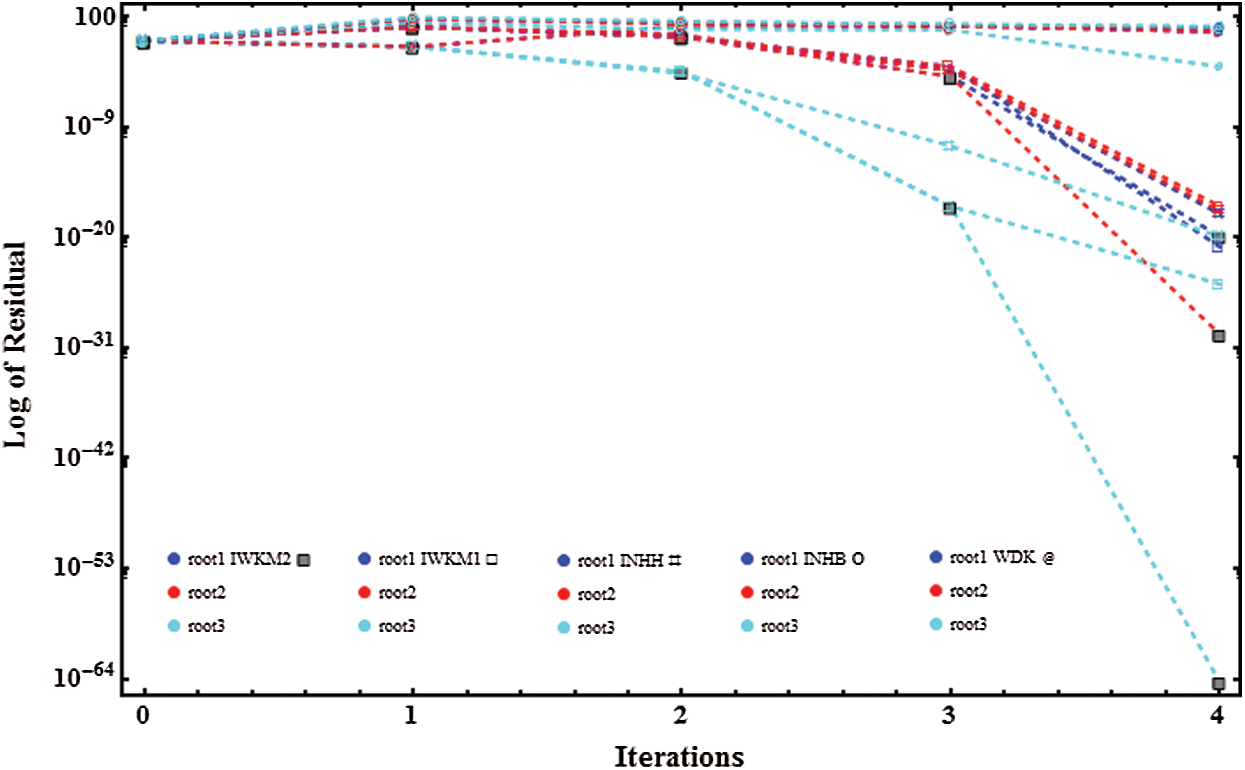 Here, we have developed two new inverse simultaneous methods of order three for determining all the roots of non-linear equations simultaneously. It must be pointed out that so far there exists an inverse simultaneous iterative scheme of order two only in the literature. We have made here comparison with the methods INHB, INHH and with classical Weierstrass-Dochive method WDK all of order two. The dynamical behavior/basins of attractions of iterative methods IWKM1, IWKM2 are also discussed here to show the global convergence behavior. Single root finding methods may have divergence region. From Tabs. 1–4 and Figs. 1–10, we observe that our numerical results are much better in terms of absolute error, number of iterations, CPU time and lapsed time of dynamical planes.

Funding Statement: The author(s) received no specific funding for this study.