Abstract: Nowadays the computer vision technique has widely found applications in industrial manufacturing process to improve their efficiency. However, it is hardly applied in the field of daily ceramic detection due to the following two key reasons: (1) Low detection accuracy as a result of ceramic glare, and (2) Lack of efficient detection algorithms. To tackle these problems, a homomorphic filtering based anti-glare ceramic decals defect detection technique is proposed in this paper. Considering that smooth ceramic surface usually causes glare effects and leads to low detection results, in our approach, the ceramic samples are taken in low light environment and their luminance and details restored by a homomorphic filtering based image enhancement technique. With relatively high quality preprocessed images, an effective ceramic decal defect detection algorithm is then designed to rapidly locate those out-of-bounds defects and further estimate their size. The experimental results show that the proposed scheme could achieve its desired performance.

Recently, Non-Destructive Testing (NDT) technique [1–4] has been developed. Most approaches, e.g., ultrasonic detection, radiographic detection, eddy current detection, penetration detection and magnetic particle detection, are already developed. Among them, ultrasonic detection and radiographic detection are used to detect the defect inside the object according to the result of reflection and transmission of sound waves or rays on objects. The eddy current detection, penetration detection and magnetic particle detection utilize other features, i.e., induction eddy distribution, permeability characteristics, and leakage magnetic filed, to detect those object surface defects. However, the above-mentioned detection techniques are employed for object structural defect detection and should be cautiously chosen according to the detected object material. In addition, the out-of-bounds defect of ceramic decals is an appearance defect rather than a structural defect, which is not suitable for the above mentioned ways.

With the rapid development of computers, machine vision detection technique [5,6] has developed as a high-precision NDT, which could save human labor costs, improve productive automation [7–9] and achieve quality tracking [10,11]. However, the technique has not been widely applied to the ceramic industry, especially in the field of daily ceramics. Based on our best knowledge, just the paper [12] and our previously published paper [13] proposed a roundness detection algorithm for daily ceramics. Evidently, during the daily ceramics based NDT process, glare phenomenon is a significant factor to hinder the application of machine vision detection technique due to its glaze surface. It might cause some blurry areas in the image, leading to inaccurate detection results. In addition, some special defects exist in the daily ceramic production, such as the out-of-bounds defect of ceramic decals, which could not be effectively resolved by the current detection algorithms.

Based on the above analysis, how to effectively solve both glare and out-of-bound decal defect detection problems are significant for daily ceramics. Therefore, our manuscript is proposed. The contributions of this paper should be summarized as follows:

(1) An effective daily ceramic anti-glare technique is proposed, which acquires some images under low light environment, and then employ a specially designed homomorphic filtering technique to increase its luminance and meanwhile maintain their details. (2) Based on above recovered images without glare phenomenon, a novel decal defect detection algorithm is developed, which could rapidly locate the out-of-bound defect and further estimate their size.

As shown in Fig. 1, a homomorphic filtering based anti-glare ceramic out-of-bound defect defection algorithm is proposed in this paper. As shown in Fig. 1, the algorithm includes two modules: (1) Image enhancement. Ceramic images are sampled under low light circumstance to avoid glare phenomenon. However, it might cause blurry areas. Therefore, the homomorphic filtering-based image enhancement technique is employed to restore the luminance and details. (2) Defect detection. The detection algorithm includes the following steps, i.e., decal border extraction, indicative curve design, defect determination and defect size estimation. Both modules are described detailedly as follows. 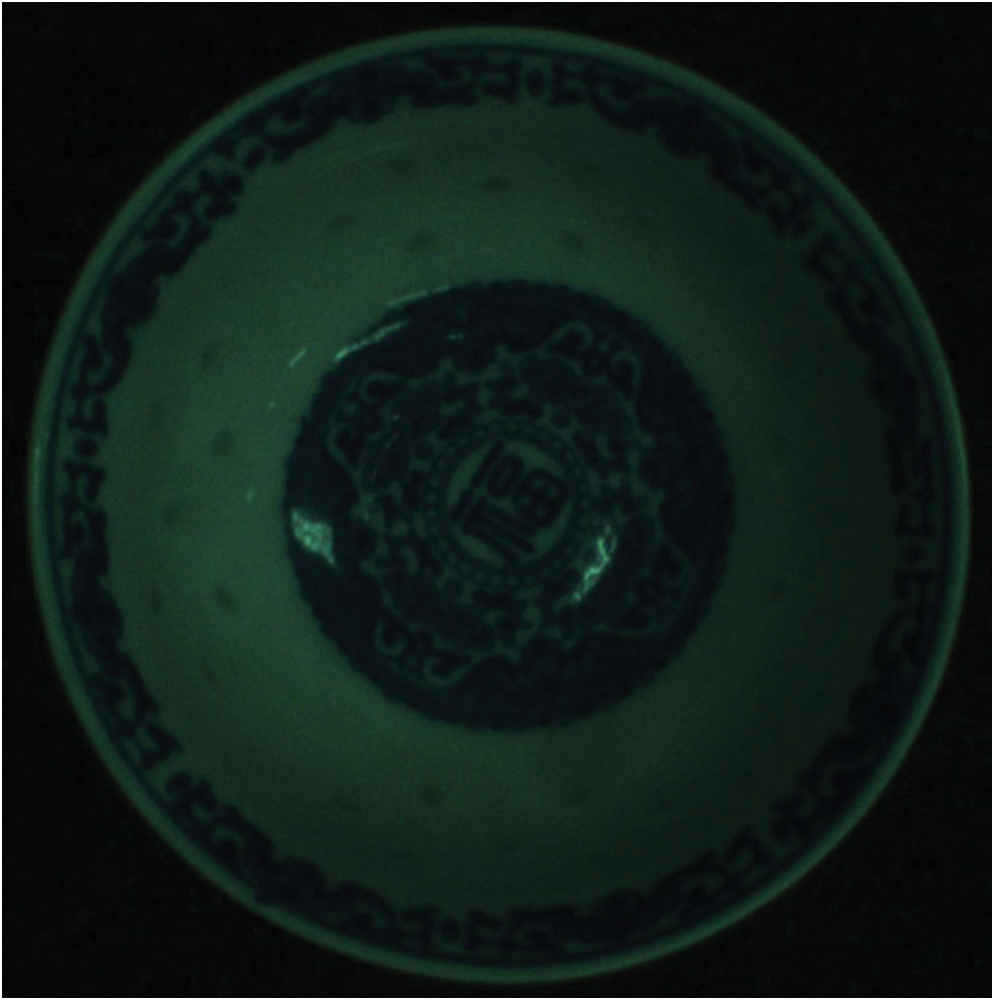 2.2.1 The Advantage of Homomorphic Filtering

As shown in Fig. 3, those images should be pre-processed to improve their visual quality. In general, both requirements should be met. Firstly, the dark background is desired to be unchanged since no ceramic defects are included in it. Secondly, other ceramic areas (except the dark background) should be enhanced to improve those details, which facilitates subsequent ceramic defect detection.

In this paper, the homomorphic filtering technique is employed to meet above requirements and discriminatively treat variable components. Specific algorithm is described as follows.

In the subsection, a homomorphic filtering based anti-glare scheme for daily ceramics is designed. Among the scheme, a transfer function is involved and its parameters should be optimized. The process is mentioned as follows.

in the spatial domain based image could be composed of two components, i.e., irradiation component

present the horizontal and vertical coordinates of one image respectively.

by using Logarithmic operations on Eq. (1).

Step 3: Perform Fourier transform on Eq. (2) and obtain their elements in the frequency domain.

Step 5: Through the inverse Fourier transform, some processed components in the spatial domain, i.e.,

, are obtained as follows.

Finally, Eq. (6) could be represented as

According to above steps, original image

could be operated to be the enhanced image

in Step 4. Therefore, to achieve desired enhanced anti-glare images, those parameters in

should be optimized. Firstly, based on our requirements, the design of transfer function

As shown in Fig. 4a, traditional Butterworth high pass filtering transfer function is designed as follows:

in homomorphic filtering process could be designed as follows and shown in Fig. 4b.

is the sharpening coefficient.

is pre-defined threshold to distinguish those low-frequency and high-frequency. In order to achieve desired performance, these parameters in Eq. (9) should be optimized. In general, to strengthen the details,

and slightly less than 1. In addition, to enhance the luminance of ceramic part,

is generally set to be a small value. 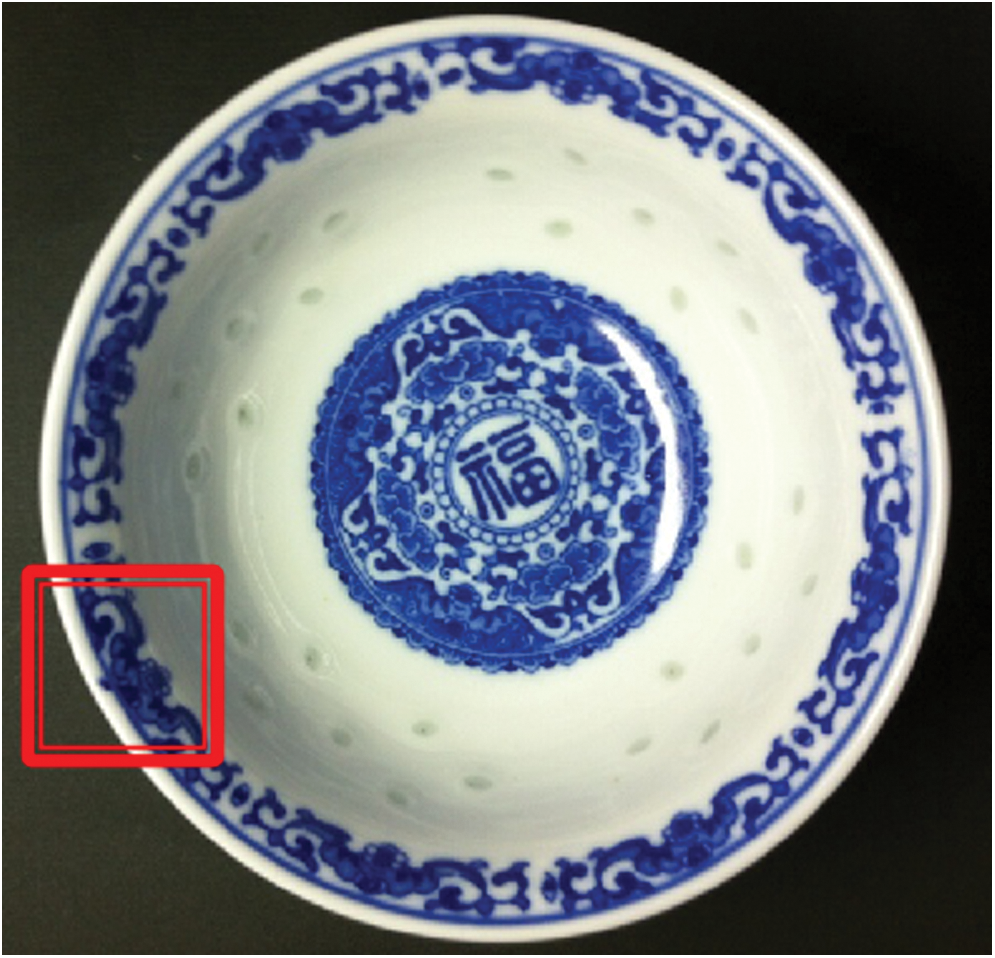 Figure 5: An example of out-of-bound defect in daily ceramic

Based on the anti-glare image by using homomorphic filtering technique, ceramic decal defect detection algorithm is given in this section to determine those out-of-bound defects as shown in Fig. 5 and then estimate their sizes. Details are described as follows.

(1) To highlight these boundaries in an image, the binarization operation is performed. Among it, a binarization threshold T is calculated as follows.

is the pixel gray value,

are the width and length of the given image respectively. The parameter

After binarization process, the outermost border and the second outer border of the image are stood out as shown in Fig. 6a.

(2) Performing the filling operation based on the outermost border to remove those inner details as shown in Fig. 6b.

(3) By subtracting the binarization image from the filling image, a residual image is acquired to highlight the second outer border as shown in Fig. 6c. 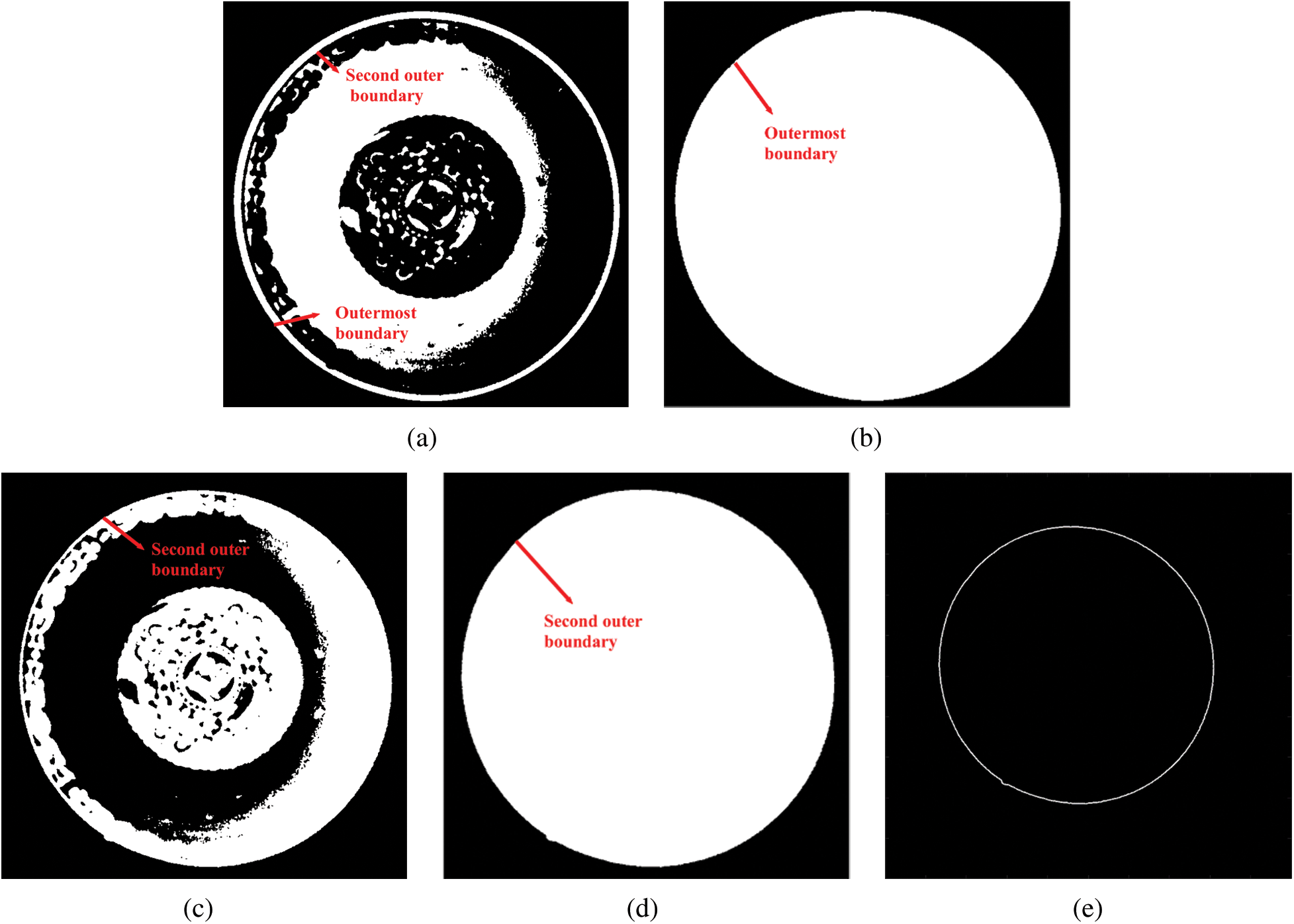 For the second outer border with a circular contour, a novel circle center determination algorithm is proposed as follows. Firstly, randomly select three points on the circular contour, and then collect their horizontal and vertical coordinates in the image, denoted as

. Based on those three coordinates, the triangular circumcenter is determined, denoted as

Apparently, the special cases, i.e., non-standard circular contour, might cause inaccurate circle center, which have been discussed in our previous work [11].

2. The Design of Indicative Curve

Based on the calculated circle center coordinates

to generate the radius array, denoted as

,where size means the number of points in the second outer border. Then those elements in

are utilized to draw a curve, denoted as radius curve.

As shown in Fig. 7, it is observed that some out-of-bound defects on the circular border will cause sudden mutation, which guides our defect detection. If the decal border is a standard circle, it is obvious that the radius curve should be a straight line. However, current ceramic industrial technique could not produce the ceramics with ideal circular decal border, which would cause unstable trend on the curve, as shown in Fig. 7. In addition, digital operations in the image acquisition device would cause jagged decal border, which could cause local dithering on the curve. Above interference might cause inaccurate defect detection. In the paper, the radius residual is introduced in the next subsection to restrain those undesired interference. 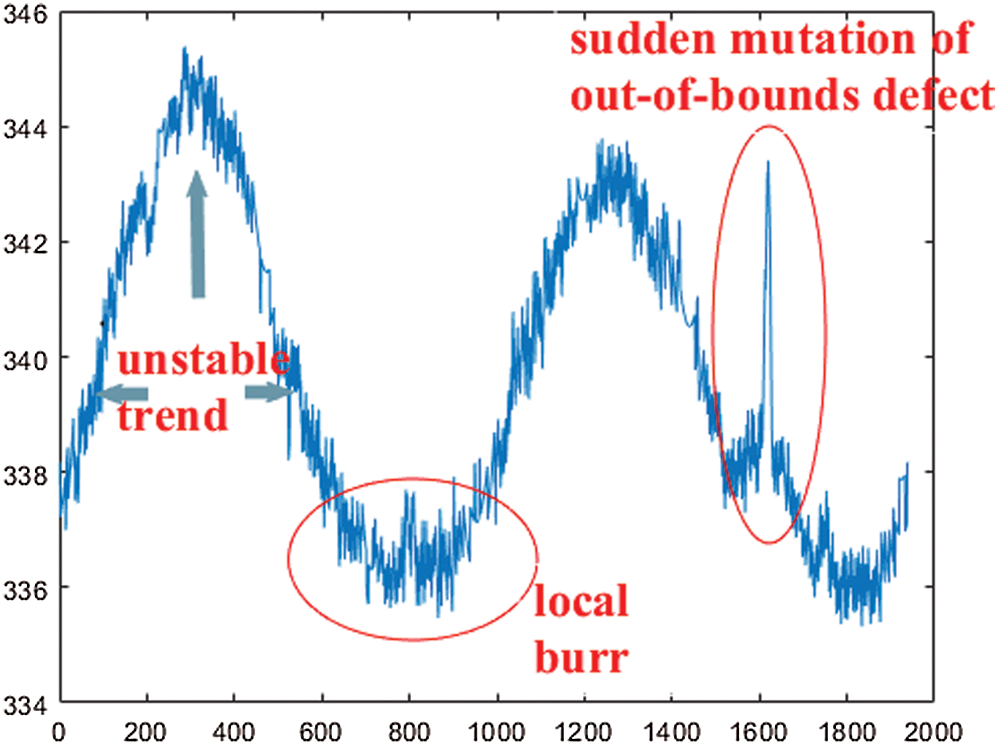 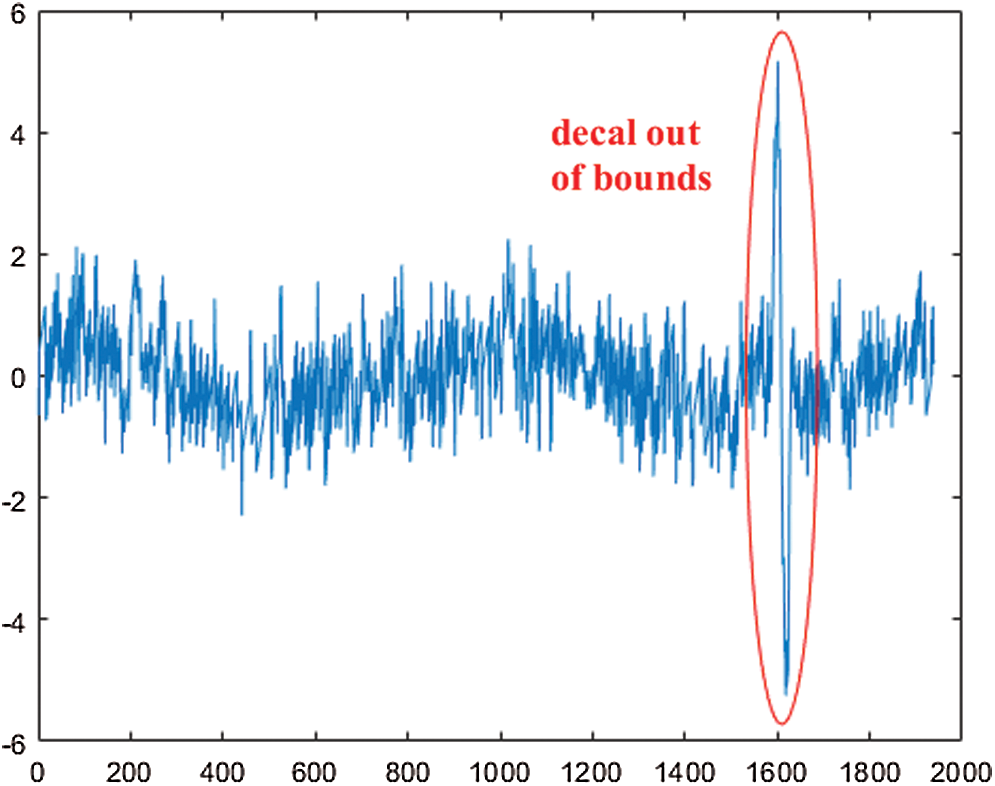 To reduce those interference, i.e., overall unstable trend and local dithering for the radius curve, and meanwhile emphasize the sudden mutation for the out-of-bound defect, radius residual array is defined as

denotes the number of boundary points. According to those elements in

, the curve is drew as shown in Fig. 8 and denoted as radius residual curve. Due to strong correlation between those adjacent elements in array L, the unstable trend and local dithering in radius residual curve can be efficiently restrained by Eq. (12). Meanwhile, the sudden mutation is emphasized.

, the corresponding radius residual exponential curves are drawn in Fig. 9. Apparently, with the increase of

Based on the idea, we calculate the maximum value of radius residual exponential array

. Then those coordinates which are larger than

are recorded to construct an array

and denoted as pulse coordinate array.

Later, the differences of adjacent elements in array

are calculated to construct one array

is larger than 80% of the number of

, it is considered that there are out-of-bound defects in the concentrated pulse regions. Otherwise the defect does not exist.

Above process could be utilized repeatedly to indicate multiple defects.

If the out-of-bound defect size estimation is operated on radius curve, the width of the defect could be measured by using the distance between the start horizontal coordinate and the end one in the defect region as shown in Fig. 11a. Meanwhile, the height of the defect could be calculated by the difference between the maximum and minimum of vertical coordinates in the defect area. Due to unstable trend and large local dithering in radius curve, those coordinates could not be easily determined and thus the size estimation result could be interfered. To achieve better performance, the size could be estimated in radius residual curve.

As show in Fig. 11b, in the radius residual curve, the width of out-of-bound defect is similarly calculated by using the distance between the start horizontal coordinate and the end. However, the sudden mutation corresponding to the out-of-bound defect will generate two symmetrical pulses, i.e., positive peak

. In the case, the height of out-of-bound defect could be approximately expressed as

. It is noted that the similar operation could be employed in the radius residual exponential curve.

To verify the efficiency of proposed algorithm, some experimental results are provided.

3.1 The Effectiveness of Homomorphic Filtering Technique

It is observed that one ceramic sample without out-of-bound defect generates a radius exponential curve with disperse pulse, as shown in Fig. 13a. In comparison, as shown in Fig. 13b, the radius residual exponential curve for a ceramic sample with out-of-bound defect leads to the concentrated pulse and the sudden mutation caused by defect is apparent. The phenomenon verifies our conclusion as mentioned in Section 2.3.2-(3).

Finally, according to the number of elements which are smaller than the threshold 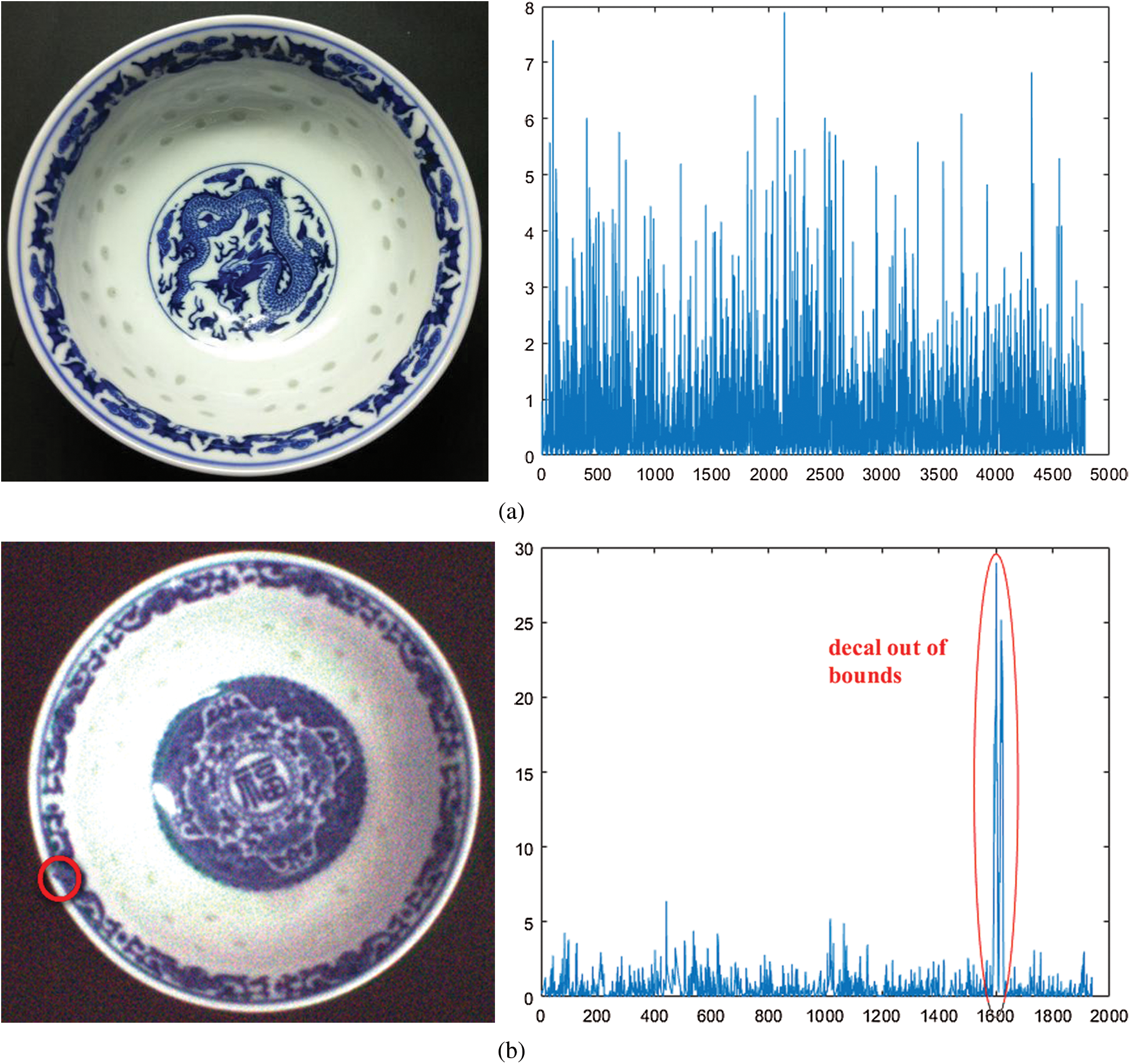 To further verify the accuracy of our proposed decal out-of-bound defect detection algorithm, its efficiency is testified. In this subsection, 1000 samples are chosen and tested by proposed defect detection algorithm. For the involved schemes, we implement the scheme with Matlab on 2.30 and 2.29 GHz Intel Xeon Gold 5118 dual core CPU with 64 GB memory. Experimental results are listed in Tab. 1. It is observed that our proposed algorithm could achieve high accuracy and affordable execution time, which demonstrates its practicability.

In the paper, an anti-glare decal out-of-bound defect detection algorithm is proposed. It includes two modules, i.e., image enhancement and defect detection. It is required that ceramic image is sampled under low light circumstance to avoid glare phenomenon and then employed homomorphic filtering to adaptively enhance the ceramic images. In addition, a detection algorithm is designed to determine the decal out-of-bound defect and further estimate its size. The experimental results demonstrate its effectiveness and practicability.