Abstract: Among the huge diversity of ideas that show up while studying graph theory, one that has obtained a lot of popularity is the concept of labelings of graphs. Graph labelings give valuable mathematical models for a wide scope of applications in high technologies (cryptography, astronomy, data security, various coding theory problems, communication networks, etc.). A labeling or a valuation of a graph is any mapping that sends a certain set of graph elements to a certain set of numbers subject to certain conditions. Graph labeling is a mapping of elements of the graph, i.e., vertex and/or edges to a set of numbers (usually positive integers), called labels. If the domain is the vertex-set or the edge-set, the labelings are called vertex labelings or edge labelings respectively. Similarly, if the domain is V (G)[E(G), then the labeling is called total labeling. A reflexive edge irregular k-labeling of graph introduced by Tanna et al.: A total labeling of graph such that for any two different edges ab and a'b' of the graph their weights has

for any choice of

The area of graph theory has experienced fast developments during the last 60 years. Among the huge diversity of concepts that appear while studying this subject one that has gained a lot of popularity is the concept of labeling of graphs with more than 1700 papers in the literature and a very complete dynamic survey by Gallian [1]. This new branch of mathematics has caught the attention of many authors and many new labeling results appear every year. This popularity is not only due to the mathematical challenges of graph labeling, but also for the wide range of its application, for instance X-ray crystallography, coding theory, radar, astronomy, circuit design, network design and communication design. In fact, Bloom et al. studied applications of graph labeling to other branches of science and it is possible to find part of this work in Bloom et al. [2] and Bloom et al. [3].

All charts discussed in this paper are simple, finite and not directed. In Chartrand et al. [4] suggest a very nice problem. Set positive integer tags from the set

to the edges of a linked graph directly with at least three in this path, so that the graph becomes sporadic. Any weight (sum of the label) on each special edge. The question is what is the base estimate for the largest

on all this unexpected task? This parameter is for the graph

is known as the irregularity strength of the

and is denoted by

. A very nice comprehensive overview on the irregularity strength is given by Lahel [5]. For more further recent results, see the papers by Amar et al. [6], Dimitz et al. [7], Gyarfas [8], and Nierhoff [9].

There is an attraction arise from these papers as, an edge irregular k-labeling defined by

such that for every two different edges

, where the weight of an edge

. If there exist such labeling for smallest value of

The total labeling of graph introduced by Bača et al. [11] by taking the domain of mapping as the union of node and links of chart to positive integers up to

This labeling of graph is called the total

labeling of the chart

if for every two different links

is defined as the minimum

has an edge irregular total k-labeling.

Keeping in view the problem imposed in Chartrand et al. [4] is there possible to find such labeling of the graph for a distinct degree. It seems to be impossible to construct a chart in which every node has a unique degree for a simple chart; however, it is possible for multigraphs (graphs in which we allow loops or multiple edges between the adjacent vertices). The question then became: What is the smallest number of parallel edges between two vertices required to ensure that the graph display vertex irregularity? This problem is equivalent to the labeling problem as described at the beginning of this section.

Using both Chartrand et al. [4] and Ahmad et al. [10] as motivation, in Ryan et al. [12], the authors decreed that the vertex labels should represent loops at the vertex. The consequence was two-fold; first, each vertex label was required to be an even integer, since each loop added two to the vertex degree; and second, unlike in total irregular labeling, the label 0 was permitted as representing a loopless vertex. Edges continued to be labelled by integers from one to

Thus, for a graph

is a total k-labeling of

is called an edge irregular reflexive k-labeling of the graph

if for every two different edges

. The smallest value of

and is denoted by

In Ivanco et al. [14] purposed the following. Any graph

Let us recall the following lemma proven in Ryan et al. [12]. For every graph

of a link is one and the minimum of the maximal weight of a link is equal to the number of edges/links of the graph. Further the labeling of a link can be obtained as the sum of three numbers in which at least two must be even.

In this paper, we investigate the

for the categorical product of two paths

be the categorical product of two paths then

The weights of the edges are given as under:

be the categorical product of two paths

The weights of reflexive edges are given as under:

Theorem 3: Let for all

be the categorical product of two paths 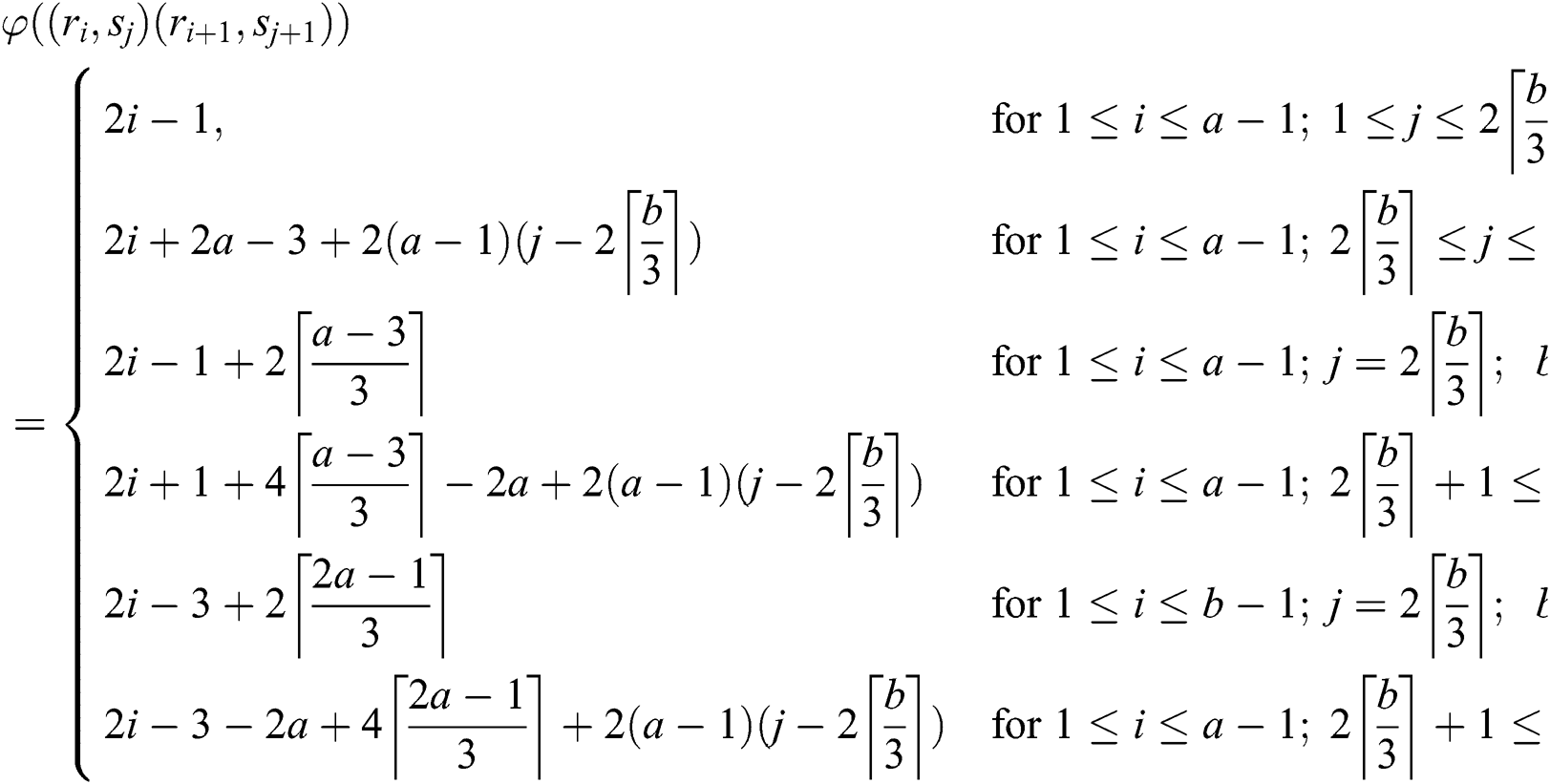 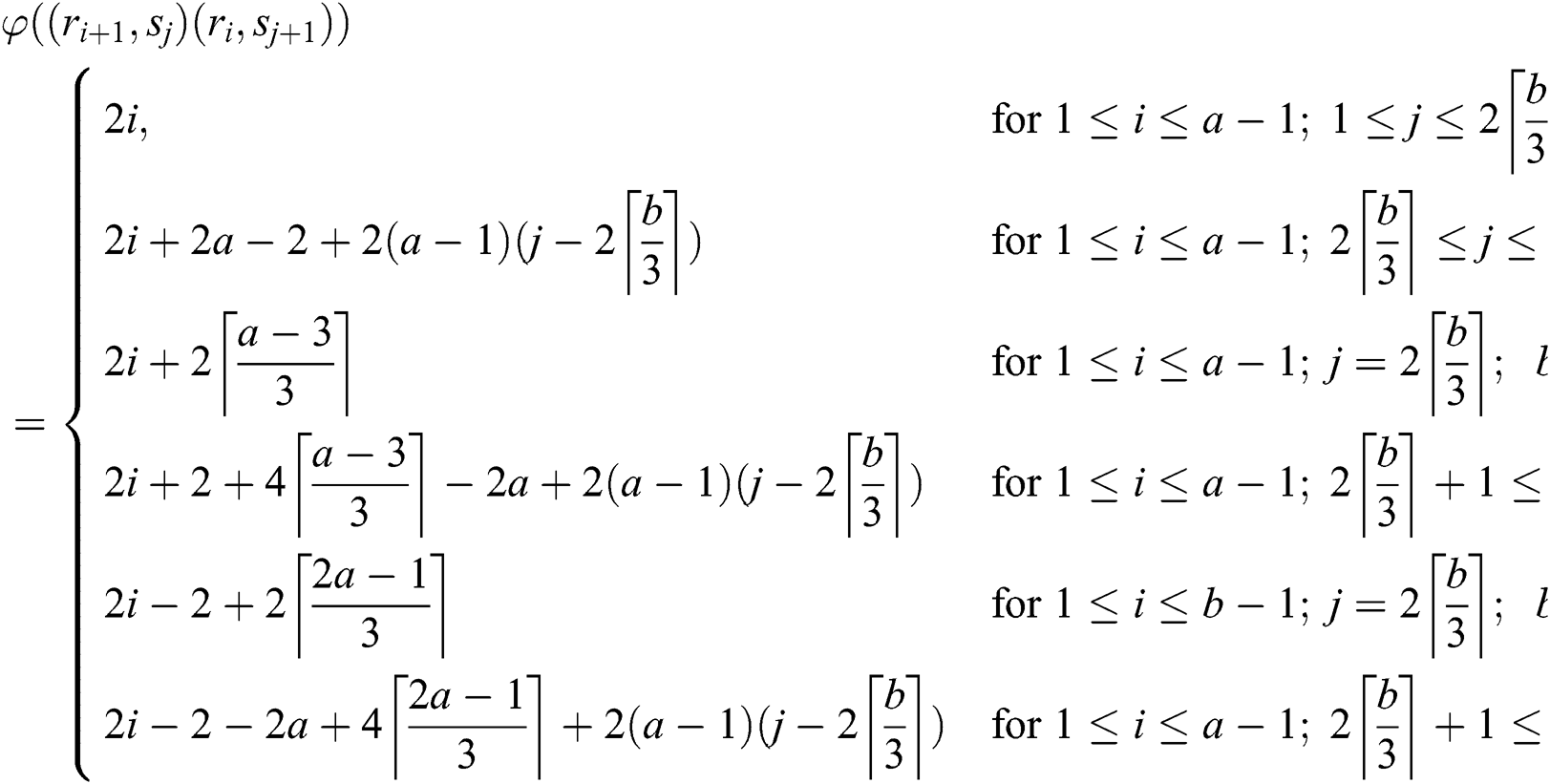 The weights of reflexive edges are given as under:

for any choice of

In future we are interested to found the reflexive edge irregularity strength of some grid related graphs.