Abstract: A robust single-sensor global maximum power point tracking (MPPT) strategy based on modern optimization for photovoltaic systems considering shading conditions is proposed in this work. The proposed strategy is designed for battery charging applications and direct current (DC) microgrids. Under normal operation, the curve of photovoltaic (PV) output power versus PV voltage contains only a single peak point. This point can be simply captured using any traditional tracking method like perturb and observe. However, this situation is completely different during the shadowing effect where several peaks appear on the power voltage curve. Most of these peaks are local with only a single global. This condition leads to the incapability of traditional tracking approaches to extract the global peak power due to their inability to distinguish between the local and global peak points. They are trapped in the first peak point even when the point is local. Therefore, global tracking approaches based on modern optimization are highly required. A recent marine predators algorithm (MPA) has been used to solve the problem of tracking the global MPP under shadowing influence. Different shadowing scenarios are used to test and evaluate the performance of MPA based tracker. The obtained results are compared with particle swarm optimization (PSO) and ant lion optimizer (ALO). The results of the comparison confirmed the effectiveness and robustness of the proposed global MPPT-MPA based tracker over PSO and ALO.

Due to the environmental impact of fossil fuel that is currently acting as the main energy source, there is a rapid growth in the usage of renewable energy as an alternative energy source [1,2]. Among different renewable energies, the photovoltaic (PV) system is a promising energy source for sustainable progress. And is frequently used around the world [3]. Unfortunately, the PV system suffers from a chief disadvantage in its is efficiency [4]. In the large-scale PV system, the condition of shadowing is highly probable due to neighboring objects, constructions, and bird droppings [5]. The shadowing condition is one of the major causes that decrease the energy conversion efficiency of PV system [6]. Actually, the condition of shadowing can be avoided be easily. As such, the optimal solution to enhance a PVS under shadowing conditions is using a bypass diode connected in parallel with every PV module, in order to bypass the shaded PV panel [7,8]. Under normal operation, the bypass diode has no effect, but under shadowing conditions, it will be forward biased and carry the current instead of the shaded PV panel. This situation leads to an increase in the number of maximum power peaks on the power voltage curve. Therefore, under shadowing condition, any traditional MPPT method is easily trapped in the first local peak point.

In the literature, there are several attempts to tackle the issue of the shadowing effect. El-Helw et al. [9] suggested using a hybrid artificial neural network (ANN) and perturb and observe (P&O) to solve the problem of tracking the global MPP under shadowing conditions. The proposed control system required three sensors: current, voltage, and solar radiation. Therefore, the controller cost can be considered high compared with others. Additionally, the disadvantage of the suggested technique is its dependency on the characteristics of the photovoltaic panel. In the same direction of using ANN, Rezk and Hasaneen proposed an ANN-based MPPT. The control system needs solar radiation and temperature sensors [10]. The main disadvantage of the proposed method is the dependency on the PV module characteristics. Eltamaly et al. [11] improved the PSO initialization stage to avoid the local maximum points. The proposed approach needs a voltage sensor, a current sensor, and some solar radiation sensors. This leads to an increase in the cost of the controller. Nafeh [12] proposed an MPPT method based on P&O method. The proposed controller needs five sensors: two voltage sensors, two current sensors, and one temperature sensor. The control system is considered non-economic and cannot deal with shadowing conditions. Camilo et al. [13] suggested an approach based on the Monod equation to track the maximum power point. The drawback of the suggested approach is the high cost of the controller because it needs three different sensors: current sensor, temperature sensor, and solar irradiance sensor. Also, the proposed method cannot deal with shadowing conditions.

Regarding the direction of decreasing the number of sensors in the control system, Dousoky et al. [14] proposed an MPPT based on the incremental conductance method employing only a voltage sensor. In place of measuring the current, the sine value of the power-angle has been used to represent the current value. The main disadvantage of the proposed system is the inability to deal with the partial shading condition. In the same direction, Kumar et al. [15] proposed a single sensor global MPPT to deal with shading conditions. The main drawback is the cost function during the optimization process mainly deepened on the characteristics of the battery. Also, Rezk [16] suggested MPPT based on particle swarm optimization employing only the current sensor. But in this work, no statistical analyses were performed.

Based on the above discussion, the key target of the current research paper is to suggest an effective single-sensor global MPPT approach for the PV system considering the shadowing effect. Reducing the number of required sensors decreases the cost of the control system. For the first time, the marine predators algorithm (MPA) is used to deal with the tracking global power issue under shadowing conditions. The performance of the proposed MPA based global MPPT is assessed using different shadowing scenarios.

The considered PV system in the current work is presented in Fig. 1. It includes PV modules, boost converter, control system, and battery bank of 2000 volt. The considered sampling time for the MPP controller is 0.05 sec. Consequently, the duty cycle is updated every 0.05 sec. The power, voltage, and current of the PV module at MPP are 200 W, 26.3 V, and 7.61 A respectively. The total number of PV panels is 120. These panels are arranged to form four series-connected arrays. Each array contains two parallel strings. 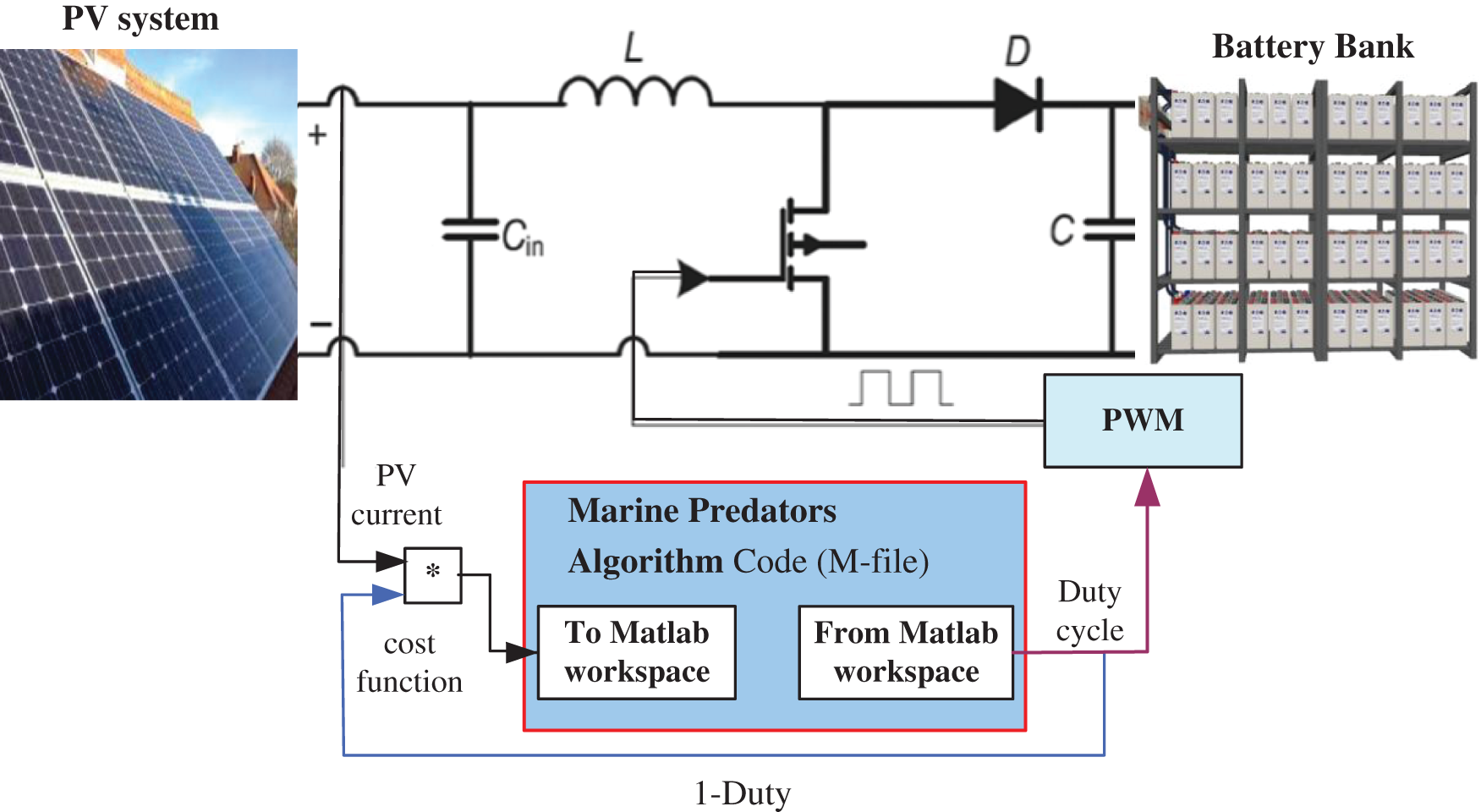 The duty cycle is the key factor to control the DC boost converter in order for maximizing the harvested energy from the PV array. The relationship between the input and output voltages of the DC converter can be presented:

Consequently, the PV array can be formulated as a function of batter voltage as following.

Based on the proposed control approach and the above equation, for constant battery voltage, the PV array voltage is directly proportional to (1−d). Consequently, in place of employing a voltage sensor, it can employ the term of (1−d) to substitute the PV array voltage. So, the fitness function during the optimization process that need to be maximum can be reformulated as follows:

During the optimization process, the decision parameter is represented by the duty cycle of the converter. Three optimization algorithms are considered in this research work. The first optimizer is particle swarm optimization (PSO). The core idea of PSO is extracted from the bird’s motion in a swarm. It is a very common optimizer that has been used before to track the global MPPT of PV array under the shadowing effect [11]. More details about the mathematical representation and physical meaning can be found in Eltamaly et al. [11]. The second optimizer is the ant lion optimizer (ALO). The core idea of ALO is extracted from the hunting mechanism of antlions in nature. Five essential stages of hunting prey like the random walk of ants, building traps, entrapment of ants in traps, catching preys, and re-building traps are implemented. ALO is used before to track the global MPPT [17]. More details about the mathematical representation and physical meaning can be found in Tian et al. [17]. The third optimizer considered in this work is the marine predators algorithm. MPA is applied for the first time to solve the problem of tracking the global MPPT. It is a very recent optimizer that was proposed by Faramarzi et al. in March 2020 [18]. The main MPA inspiration is the widespread search for food strategy which is the movements of Levy and Brownie in the surrounding predators along with an optimal encounter of modified policy in the biological interaction between the predator and the prey. More details about the core idea and mathematical representation can be found in Faramarzi et al. [18]. In MPA, the prey, as well as predator, are viewed as search representatives, since the predator is searching for the prey, meanwhile, the prey itself is looking for its food. The velocity ratio among the predator and the prey is the key factor in transferring the process from one stage to another. In MPA, the large-velocity ratio is the notable feature in the first phase. Whereas the unity and low ratio are the observable marks for the second and third stages.

For the first shading scenario, the solar radiation intensities applied to the four series PV arrays are 1000 W/m2, 800 W/m2, 700 W/m2, and 400 W/m2 respectively. With this situation, there are four peaks. The global power of 13606 W is located on the second point of the power voltage curve as presented in Fig. 2. The related PV array voltage and current at global MPP are 1229.8 V and 11.12 A respectively. Tab. 2 presents the evaluation of the statistical performance of different tracking approaches. It can be noted that, with the first scenario, the best success rates are 100 %, 86%, and 68 % respectively for MPA, PSO, and ALO methods. Out of 50 runs, ALO cannot extract the global power 16 times. The minimum standard deviation of 6.8014 is reached using MPA followed by ALO and PSO. Also, the minimum RMSE of 8.08 is achieved by MPA. Detailed performance of the considered optimizers with different shading patterns is presented in Tab. 3. Overall, under the first scenario MPA algorithm has superior performance in comparison with ALO and PSO.

Fig. 3 shows the performance comparison of different tracking approaches. Considering Fig. 3 and Tab. 2, it can be noted that the best tracking method is achieved by MPA method. It achieved the best values for different performance evaluation metrics followed by ALO and then PSO. The average success rate values are 100%, 87.5%, and 76% respectively for MPA, PSO, and ALO. As an example, the detailed performance of the PV system with the 2nd scenario using MPA optimizer is shown in Fig. 4. It presents the PV power, voltage, current, duty cycle of the DC converter, the variation of fitness function, and the position of duty cycle during the optimization process. It can be noted that the optimizer needs around 1.25 sec to reach the global maximum power of 13676.96 W. The corresponding voltage, current, and duty cycle values are 1229.8 V, 11.12 A, and 0.385, respectively.

In this paper, for the first time, the marine predators algorithm (MPA) is used to extract the global power of the partially shaded PV systems. To prove and test the reliability of the MPA optimizer, different evaluation metrics are used. Four different shading scenarios are considered to test the tracking performance. The idea is changing the shading scenario to vary the position of the global MPP. The obtained results are compared with common optimizers; particle swarm optimization (PSO) and Antlion Optimizer (ALO). MPA achieved the best values for different performance evaluation metrics. For the success rate, the optimizers are ranked as follows; MPA, PSO and ALO. But for the overall ranking, the best optimizer is MPA followed by ALO and then PSO.

Funding Statement: This project was supported by the Deanship of Scientific Research at Prince Sattam Bin Abdulaziz University under the research project No. 2020/01/11742.