Abstract: This paper presents the design and analysis of a miniaturized and novel wearable ultra-wideband (UWB) band-notch textile antenna for Body Area Networks (BANs). The major goal of building the antenna for wearable applications with band notch in X-band is to reject the downlink band (7.25 to 7.75 GHz) of satellite communication in the UWB frequency ranges of 3.1–10.6 GHz to keep away from interference. Computer Simulation Technology (CST) TM Microwave Studio, which is user-friendly and reliable, was used to model and simulate the antenna. The radiating element of the antenna is designed on Jeans’ textile substrate, which has a relative permittivity of 1.7. The thickness of the jeans’ fabric substrate has been considered to be 1 mm. Return loss, gain, bandwidth, impedance, radiation, and total efficiency, and radiation patterns are presented and investigated. The antenna is simulated placed on the three layers of the human body model, and the on-body results are summarized in comparison with free space. Results and analysis indicate that this antenna has good band-notch characteristics in the frequency range of 7.25 GHz to 7.75 GHz. The parametric study varying the relative permittivity of Jeans’ fabric substrate of this antenna is also evaluated. In addition, effects on the antenna parameters of variation of ground plane size have been reported. The antenna is 25 mm × 16 mm × 1.07 mm in total volume. Results reveal that this antenna achieves the design goal and performs well both in free space and on the body.

Recently, Wireless Body Area Networks (WBANs) systems are growing to be a prevalent study area due to their medical, real-time health monitoring, and entertainment applications. WBAN consists of numerous wireless sensor nodes dispersed throughout the human body that communicate with an on-body base unit to provide real-time patient monitoring. Ultra-wideband technology is a cutting-edge wireless communication system. UWB technology is thought to have a wide range of applications in short-range communications, wearable applications in sensor networks, body area networks, wireless positioning systems, IoT applications, biomedical imaging, and high data rate small range communications due to its low transmission power (−44.3 dBm), compact size, high data rate, and large bandwidth [1]. The UWB frequency range spans 3.1 to 10.6 GHz, according to the Federal Communications Commission (FCC) [2]. The problem is that other narrowband frequencies generate interference in the 3.1 to10.6 GHz frequency range. Therefore, the band-notch technique is essential. WiMAX, WLAN, and X band satellite communication channels interfere with UWB. As a result, in order to design an interference-free and power-efficient UWB communication system for Wireless, it is important to filter out these unneeded signals (BANs) [2,3].

In every wireless communication system, an antenna is one of the most important components. In Body Area Networks (BANs), there will be many sensor nodes over the human body surface for real-time health monitoring purposes where the antenna will be integrated with these sensors. The main problem is that the human body is made up of lossy tissues, and when the antenna is placed on it, the performance alters to that of free space operation. To make power-efficient wireless communications in BANs, researchers must investigate the impacts of the human body on antenna performance metrics such as return loss, gain, radiation efficiency, overall efficiency, bandwidth, and radiation pattern [1]. Otherwise, the UWB system may not work efficiently for BANs. A perfect antenna design gives relaxation to system designers. Researchers recently focused on designing a suitable wearable ultra-wideband antenna for efficient communication in BANs [4–7]. The modeling and categorization of UWB on-body radio channels for wireless body area networks have been provided in [8–11]. In [12–14], subject-specific UWB on-body propagation and radio channel characterization have been investigated. In the open literature, ultra-wideband band notch antennas have been described [3,15–25]. For the integration of ultra-wideband band notch characteristics, different authors have used different techniques on antenna structure. In [3,19,22,23] UWB antennas for X-band downlink satellite communication systems (7.25–7.75 GHz), a band elimination strategy has been utilized. Other authors reported band rejection at WLAN and WiMAX [14,16,18,20,21]. There has yet to be a breakthrough in the development of UWB wearable band notch antennas for BANs in healthcare applications. Several papers reported band-notch antennas for wireless communications, and few have been reported for WBAN. The majority of UWB band-notch antenna designs, on the other hand, have been focused on various substrates. Various authors showed antennas that were larger, which would not be suited for wearable applications. In WBANs scenarios, an antenna will be attached with the sensor system on the clothes of the human body. In this case, a textile-based wearable band-notch antenna could be a good option. However, there is a very limited study about the compact wearable UWB band-notch antenna in the open literature. According to knowledge, jeans’ textile-based compact wearable UWB antenna with the band rejection of X-band downlink satellite communication systems (7.25–7.75 GHz) has not been reported in any literature of the author in this paper.

The construction and analysis of a new and very tiny Jeans’ textile-based band notch, UWB wearable antenna for Body Area Networks (BANs) for real-time health monitoring applications are discussed in this research. Free space and on-body results are compared and investigated. In addition, a parametric study was performed varying the antenna ground plane size and dielectric constants of the Jeans’ fabric.

The following is a breakdown of the paper’s structure: The antenna design is discussed in Section 2. The results, parametric research, and discussion are provided in Section 3. In section 4, the on-body performance of the antenna has been discussed, and finally, Section 5 concludes the paper.

Figs. 1a–1c demonstrates the proposed miniaturized UWB band notch antenna showing the antenna’s detail sizes of various components. In addition, it shows a detailed design of the front side and backside of the antenna. The antenna is modeled with (CST)TM software, which is user-friendly and reliable. Figs. 1d and 1e show the front and back views of the CST design antenna. The simulated results of the CST design are comparable with measurements [1,4,6,7]. 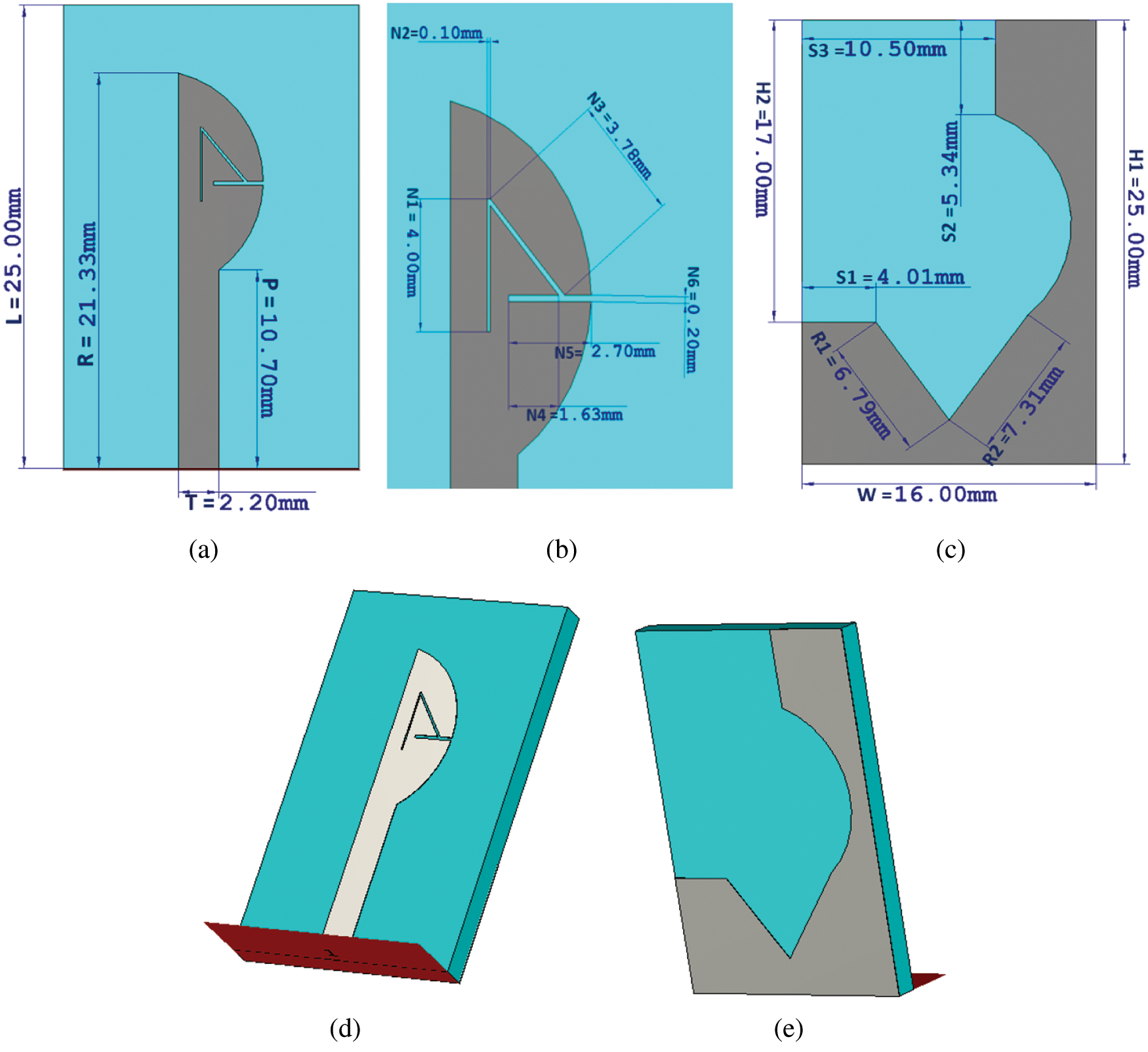 Figure 1: Novel and compact wearable UWB band notch textile antenna: (a) The front side (b) Details of the slit size in the front image. (c) Backside, demonstrating the size of the ground plane (d) Front view of CST design (e) Back view of CST design

This section has shown and discussed the return loss, bandwidth, gain, radiation efficiency, total efficiency, and radiation patterns. Then parametric study has been performed varying the antenna ground plane size and relative permittivity values of the antenna substrate. Finally, the antenna was simulated on three layers of the human body, and the results were shown and studied. 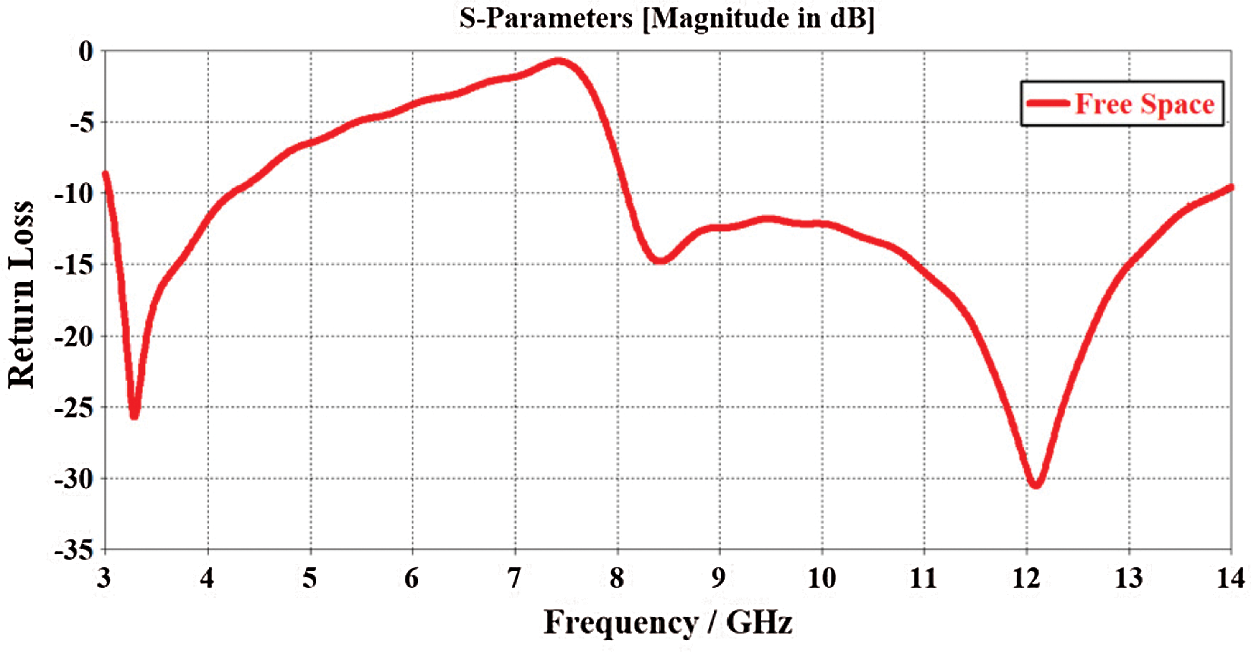 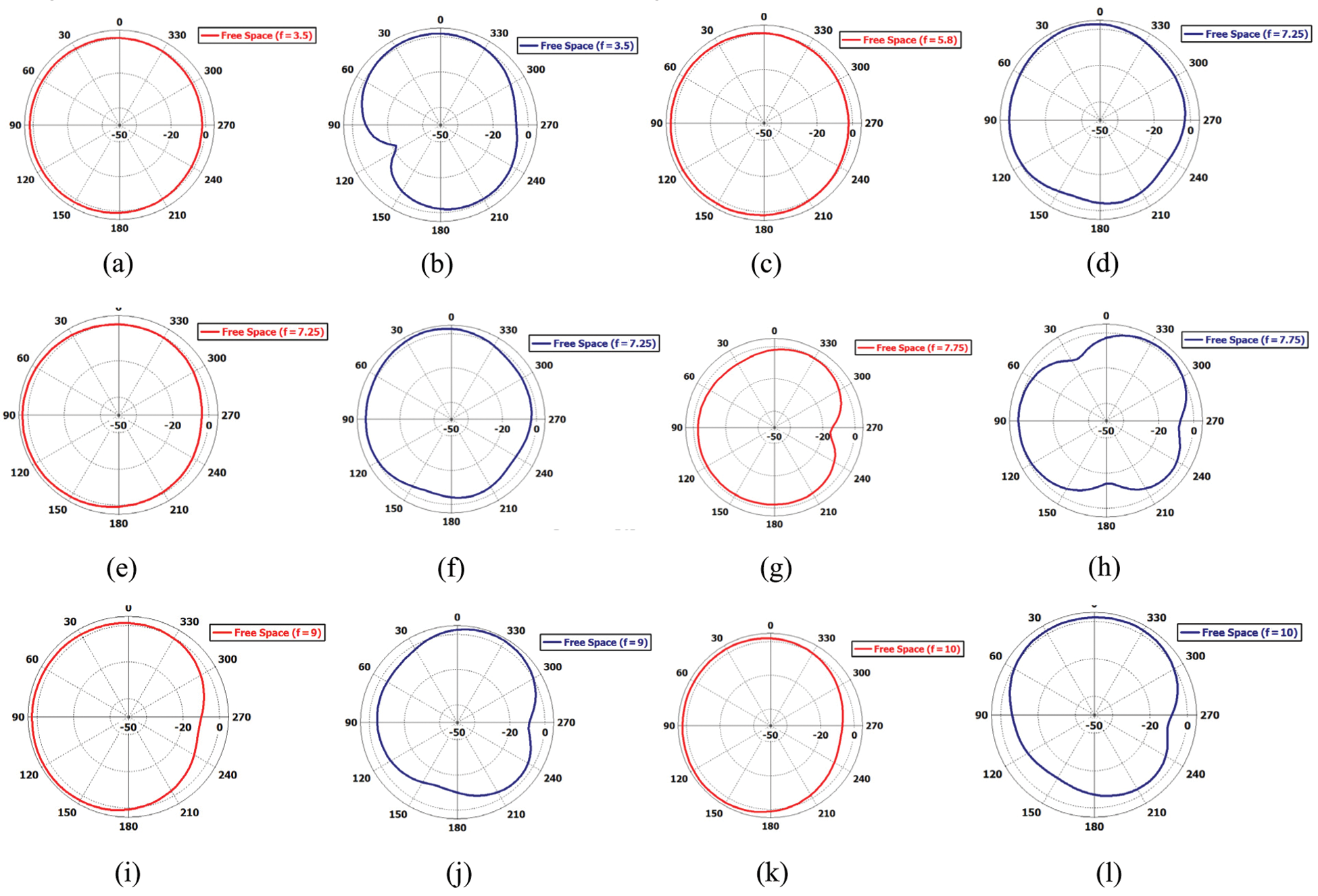 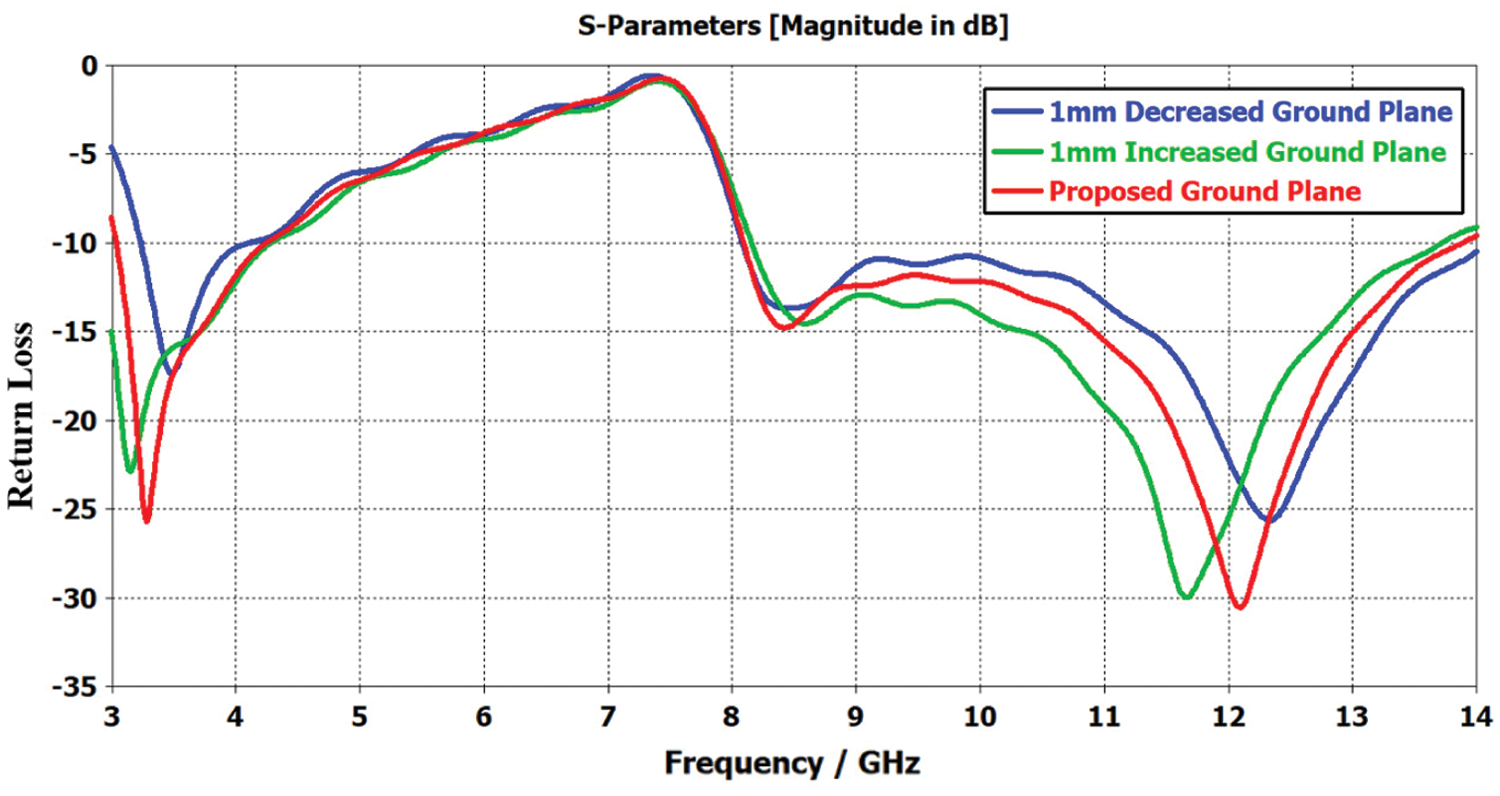 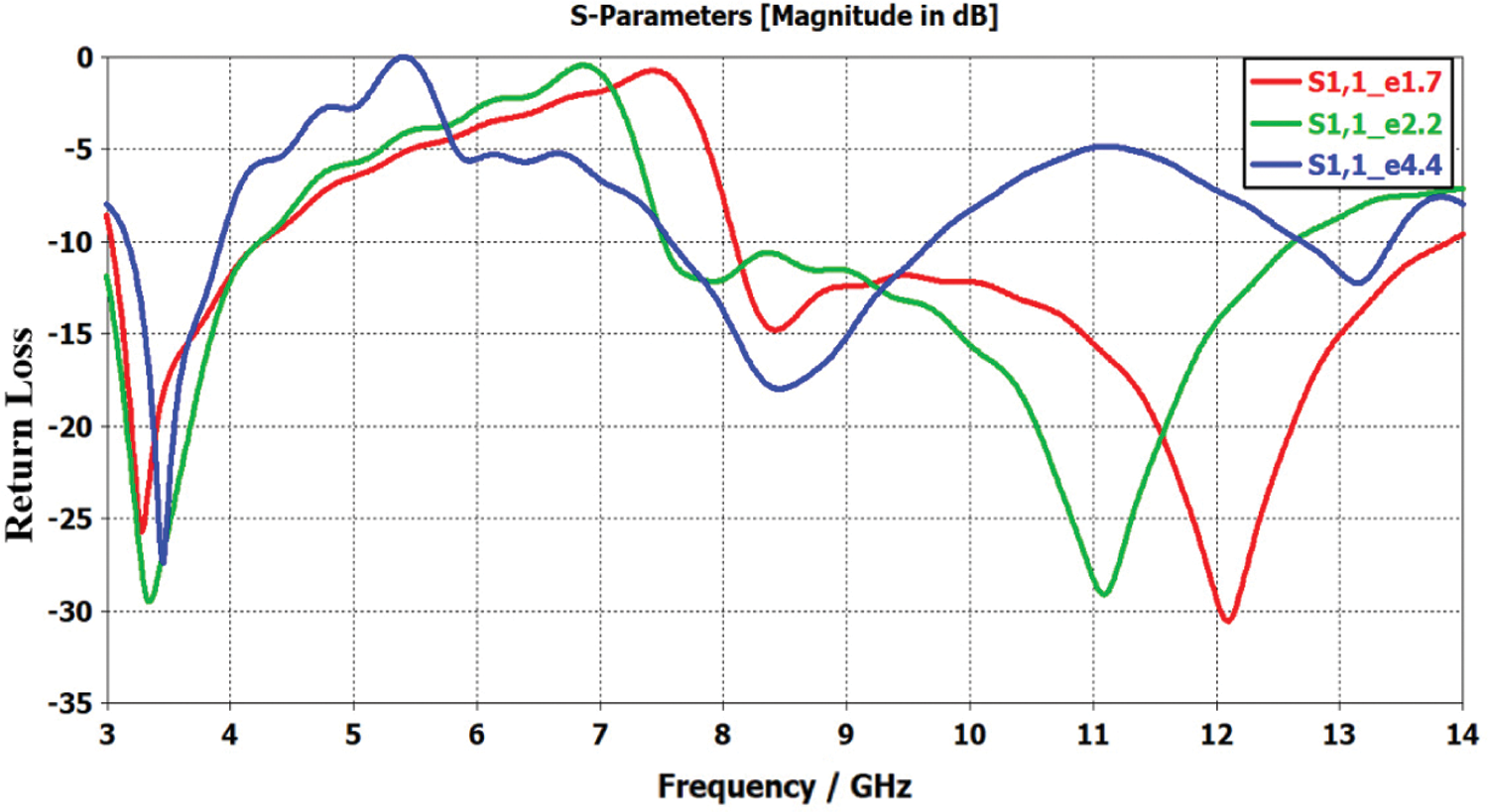 Figure 6: The antenna’s return loss responses as the dielectric constant of the jeans substrate changes

3.5.3 Radiation Efficiency for Variation of Permittivity Value of Jeans’ Fabric

3.5.4 RadiationPatterns for Variation of Permittivity Values of Jeans’ Fabric 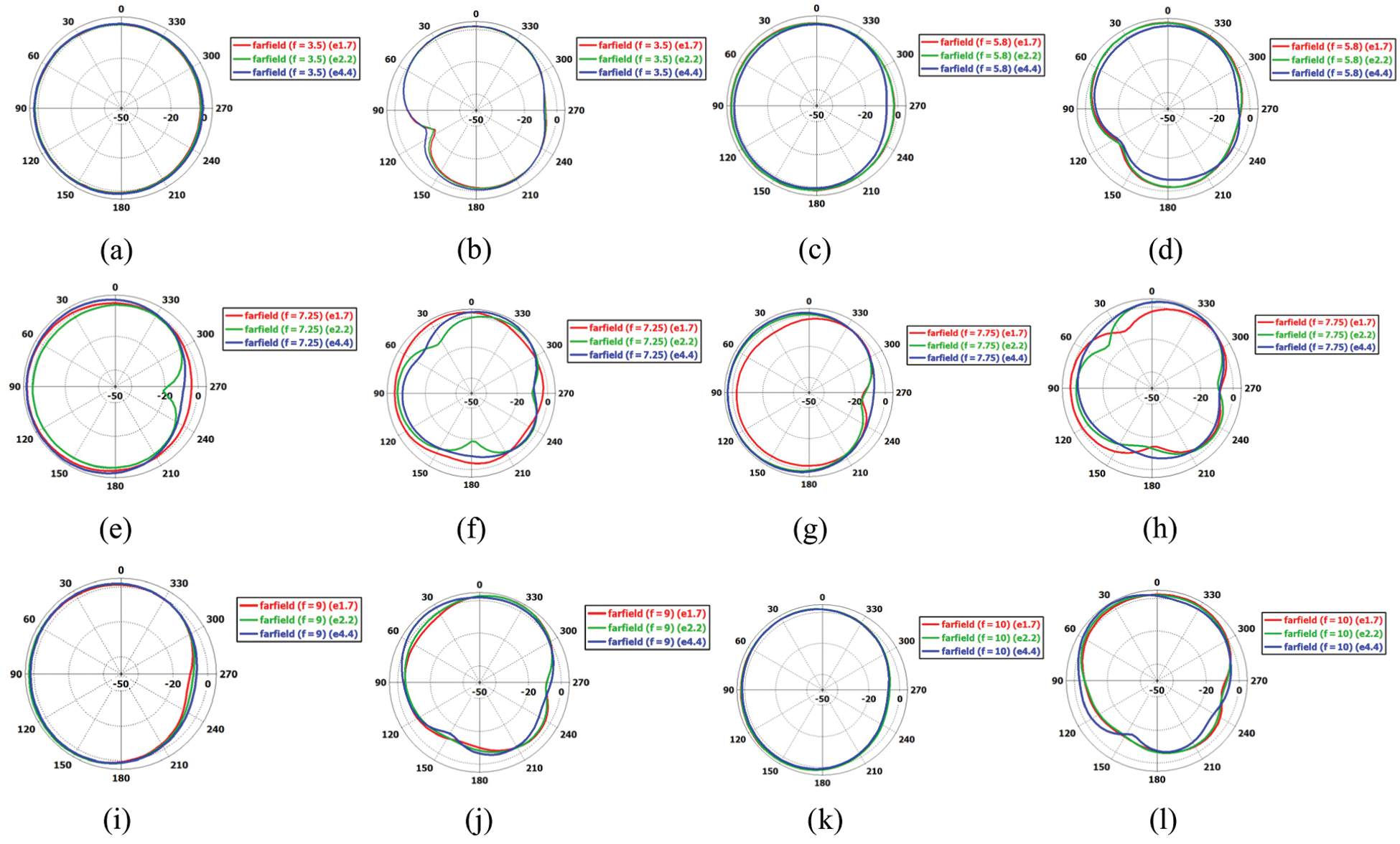 To test the antenna’s on-body performance, the on-body antenna parameters are examined and assessed in this part. Using the CST software, a three-layer human body model was created.

The three layers of the human body model are depicted in Figs. 8a and 8b, with the antenna on top of the skin layer. The skin (top layer), fate (middle layer), and muscle (bottom layer) are the three layers. The thickness of the skin layer, fat layer, and muscle layer is 2, 10, and 10 mm, respectively. Tab. 6 lists the height, width, and length of three human body tissues: skin, fat, a nd muscle. The dielectric properties of the human frequency dispersive body model are calculated from [26]. During CST simulations, the relative permittivity and loss tangent of the human body model layers where skin, fat & muscle formation are determined. The dielectric characteristics and tangent loss of skin, fat, and muscle are shown in Tab. 7. For this study, the gap between the antenna and the three-layer human body model was set to 4 mm; see Fig. 8. 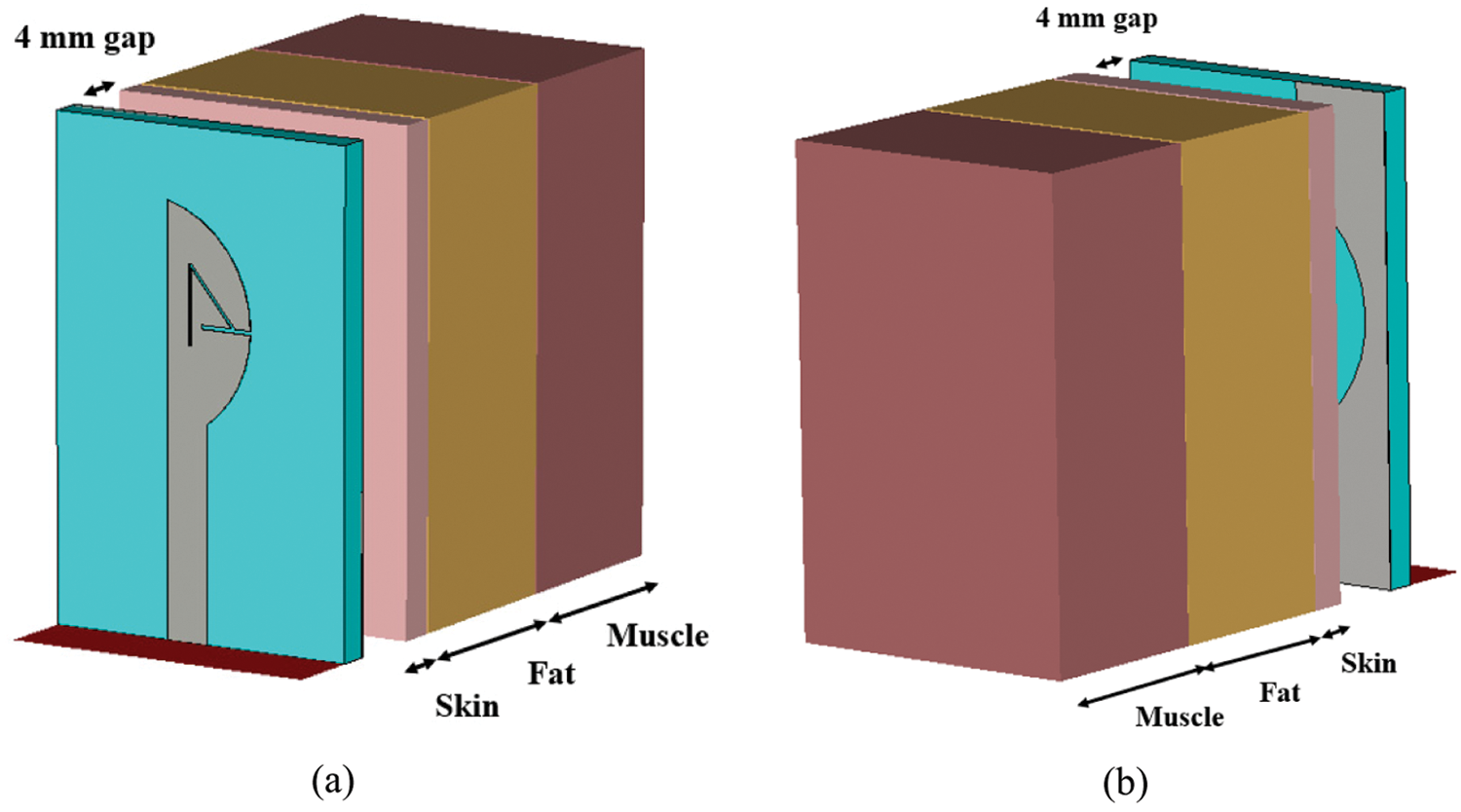 Comparison of free space and on-body return loss responses of the antenna are provided in Fig. 9. From Fig. 9, it is observed that when the antenna is put on the human body model, slight frequency detuning is noticed at the lower band; however, the band notch still remains in the same range, 7 to 7.85 GHz. A slight change of impedance is observed while placing the antenna on the human body outside the band of both frequencies. Free space and on-body return loss responses have nearly similar results. 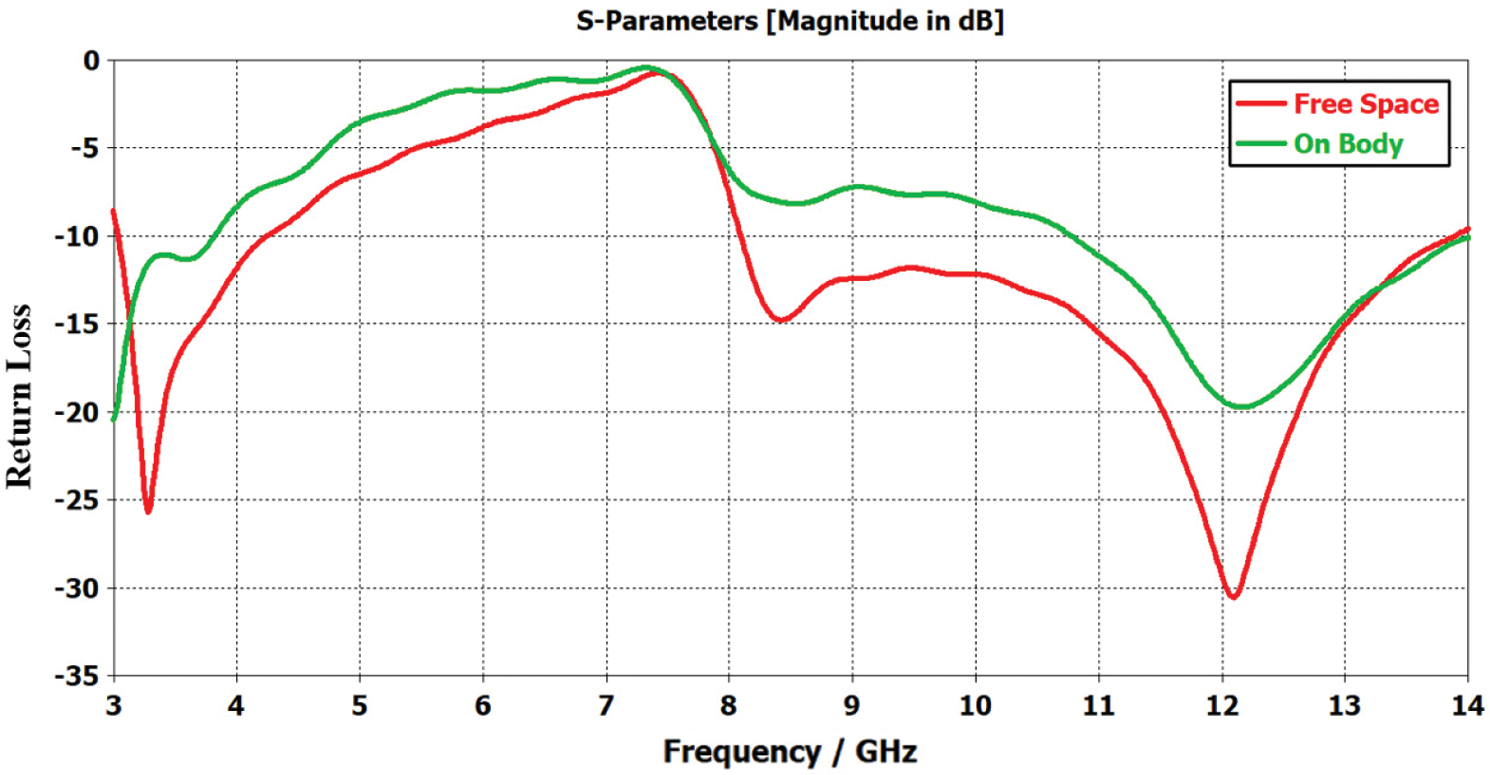 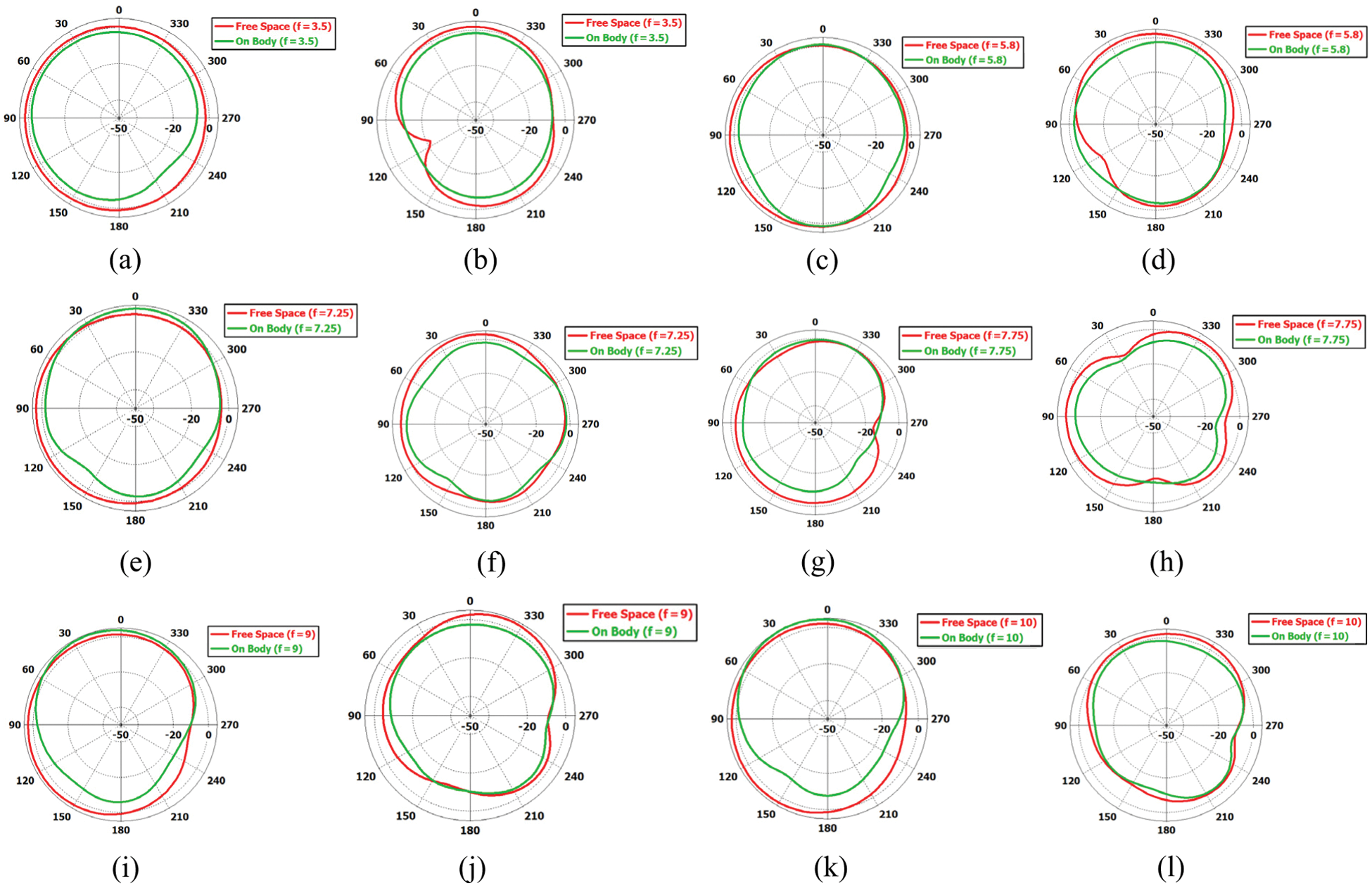 A new miniaturized wearable ultra-wideband band notch jeans’ textile-based antenna for Body Area Networks (BANs) is designed and presented. To avoid interference, the antenna operates in the ultra-wideband frequency bands of 3.1 to 10.6 GHz with band-notch capabilities in X-band to exclude the downlink band (7.25–7.75 GHz) of satellite communication. Antenna performance parameters are presented and investigated. Parametric study results of the variation of antenna ground plane size are demonstrated and analyzed. Results and analysis show that variation of ground plane size does not affect the band rejection frequency range or band notch; however, slight frequency shifting at a lower frequency range is observed.

The performance parameters of the antenna for different relative permittivity values of Jeans’ fabric are presented and investigated. Results show that variation of relative permittivity values of Jeans’ fabric has huge effects on the antenna performance parameters. Finally, the on-body performance parameters of the antenna are presented and analyzed. Results show that when the antenna is put on the body, the band notch remains in the same frequency range (7.25 to 7.75 GHz). The antenna performs very well even when it is put very close to the human body model at operating frequencies such as 3.5, 5.8, 9, and 10 GHz. The antenna shows very poor results at 7.25 and 7.85 GHz both in free space and on the human body model due to band notch characteristics, and that is expected. The antenna performs very well at other frequency bands of operation. This antenna shows a maximum of nearly 65.33% radiation efficiency, 55.17 total efficiencies, and 5.80 dB gain at 10 GHz when placed even very close (4 mm away) to the human body model. The antenna’s length, width, and height are 25, 16, and 1.07 mm, respectively. The antenna is electrically small at the center frequency of operation. The antenna was printed on Jeans’ fabric, and the total height of the antenna is considered to be 1.07 mm. Due to textile-based, this antenna will be a good choice for wearable applications. This UWB antenna will be appropriate for wearable applications in Body Area Networks (BANs) by considering the above-mentioned facts.