Abstract: This paper presents a novel model-free sliding mode control (MFSMC) method to improve the speed response of permanent magnet synchronous machine (PMSM) drive system. The ultra-local model (ULM) is first derived based on the input and the output of the PMSM. Then, the novel MFSMC method is presented, and the controller is designed based on ULM and MFSMC. A sliding mode observer (SMO) is constructed to estimate the unknown part of the ULM. The estimated unknown part is feedbacked to MFSMC controller to perform compensation for parameter perturbations and external disturbances. Compared with the sliding mode control (SMC) method, the results of simulation and experiment demonstrate that the presented MFSMC method improves the dynamic response and robustness of the PMSM drive system.

Permanent magnet synchronous motor (PMSM) has been widely used in industrial drives, railway transportation, and electric vehicles (EVs) due to its simple structure, energy-saving, and high efficiency [1]. However, the variations of PMSM parameters and unknown external disturbance [2,3] can cause unstable operation in the PMSM drive system.

The conventional PI control method cannot satisfy higher performance control of the motor [4,5]. Therefore, many control strategies have been presented to improve the robustness and the reliability of the control of PMSM drive system, such as sliding mode control (SMC) [5–8], predictive control, fuzzy logic control, and so on.

SMC is widely used for its insensitive to parameter perturbation and is easy to be implemented in engineering. A new SMC with variable speed reaching law was presented to reduce the chattering caused by sign function, and the system performance was improved [9]. An integral continuous SMC with an adaptive disturbance observer was presented to eliminate chattering and torque ripple [10]. An SMC integrated with extended state observer (ESO) was developed to reduce the influence of the load torque for the PMSM drive system [11]. However, some uncertainties in PMSM drives can lead to performance degradation because the controller requires an accurate model.

To reduce the dependence of the controller design on the system model, a model-free control (MFC) method [12,13] was presented to design the controller for an uncertain system [14,15]. A robust MFC controller was proposed based on an ultra-local model (ULM) [16]. An MFC controller integrated with an ESO was applied in the current loop of PMSM [17,18], and the method had strong robustness to the variation of motor parameters. A model-free predictive controller was designed for the current loop of PMSM drives, and the performance of PMSM drive had been effectively improved [19]. Two model-free SMC structures were suggested for nonlinear systems and were validated in twin-rotor aerodynamic systems [20,21], and the experimental results show that the method is feasible and has strong robustness.

This paper presents a novel model-free sliding mode control (MFSMC) method based on ULM. It improves the dynamic response and robustness of the PMSM drive system. The main contributions of this paper are summarized as follows:

(i)   An MFSMC method that combined SMC with MFC is presented to improve the speed response for the PMSM drive system in case of parameter perturbation. The MFSMC method has the features of both MFC and SMC. More specifically, while the MFC in the system ensures independence on the precise PMSM model, the SMC improves the robustness of the PMSM system to parameter perturbations and external disturbances.

(ii)   The ultra-local model (ULM) of the speed loop is derived based on the input and the output of the PMSM drive system.

(iii)   The unknown part of ULM is precisely estimated by the designed SMO and feedbacked to the controller to performed compensation for parameter perturbations and external disturbances.

The rest of this paper is constructed as follows. Section 2 describes the ultra-local model of the speed loop for PMSM. Section 3 designs the MFSMC speed controller. Section 4 shows the simulation and experimental results. Section 5 gives a brief conclusion.

In the d-q reference, the electromagnetic torque equation of a PMSM is

In the d-q reference, the PMSM mechanical equation is

where is the electromagnetic torque (Nm); is the load torque (Nm); J is the rotational inertia (kg⋅m2); is the number of pole pairs.

where indicates the unknown disturbances and parameter perturbation.

According to the MFC method [16], the ULM of the speed loop for PMSM is designed as

where is the design parameter, the paper sets it as ; F is the unknown part of the ULM, , it consists of the modeled part and the disturbance part of PMSM.

To improve the speed response and the robustness of the PMSM drive system, this section designs the speed controller by the MFSMC theory.

Based on the ULM (6) of the PMSM [16], the MFC speed controller is designed as

where is the reference speed; , are the proportional and the integral gains; is the speed error.

Added and subtracted the speed derivation, , on the left of Eq. (10) yields

Define the estimated error, . E is a bounded value. Then the Eq. (11) becomes

Introducing the state variables and , then, the following equation is obtained

Theorem 1: Chosen the constant rate reaching law , and chosen the SMC signal as (14), then the system state will reach sliding mode manifold in finite time

where . is the upper boundary of E, and is a positive constant.

Proof: Choose a Lyapunov functional candidate to be

Chosen , it will yield .

Then the system state will reach the sliding mode manifold in finite time.

This completes the proof.

Remark 1: Introducing the term of SMC into MFC, the MFSMC method reduces the dependence on the accurate PMSM model, and improves the robustness of the system to parameter perturbations and external disturbances. So, the MFSMC method has the advantages of both MFC and SMC.

Since F is an unknown term in the ULM (6), the sliding-mode observer (SMO) is designed to observe the value of F. An SMO is designed as

Subtracting (6) from (19) gives the error equation

Theorem 2: The error converges to zero in finite time, if the sliding mode manifold is chosen as , and the gain of SMO, k, is designed as .

Proof: The Lyapunov function is selected to be

The derivative of is

Then, the error variable will converge to 0 in a finite time, and the SMO is asymptotically stable.

This completes the proof.

Based on the sliding-mode equivalent principle [23], this gives the estimated

This section gives the results of simulations and experiments to demonstrate the effectiveness of the presented method.

To verify the advantage of the designed MFSMC speed controller, MATLAB/Simulink is used to simulate the PMSM speed control system. The schematic diagram of the PMSM control system is presented in Fig. 2. The vector control scheme of is carried out on. The parameters of PMSM are listed in Table 1. 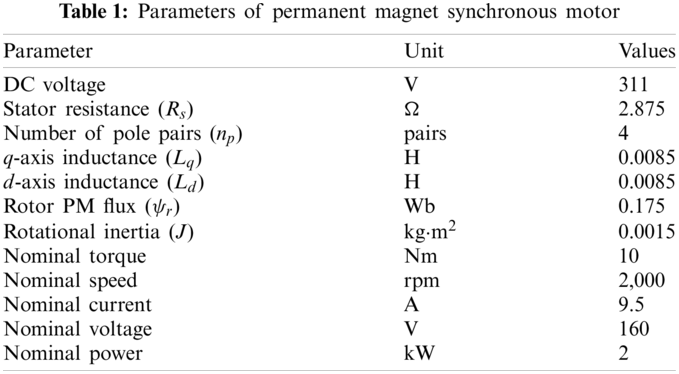 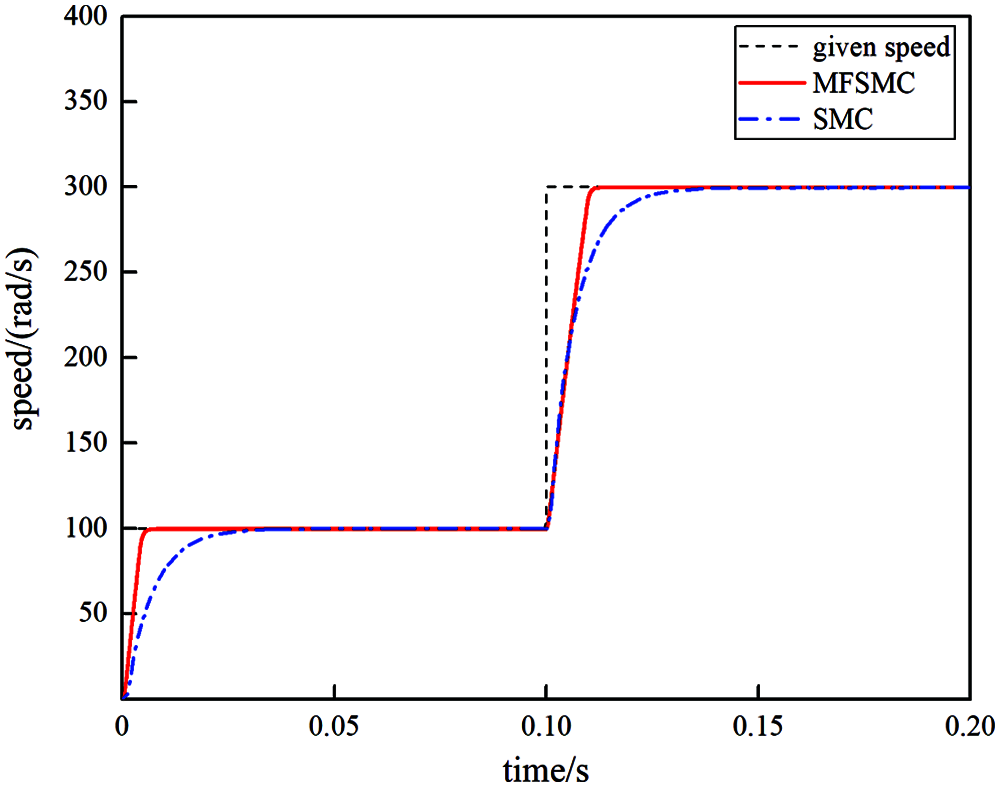 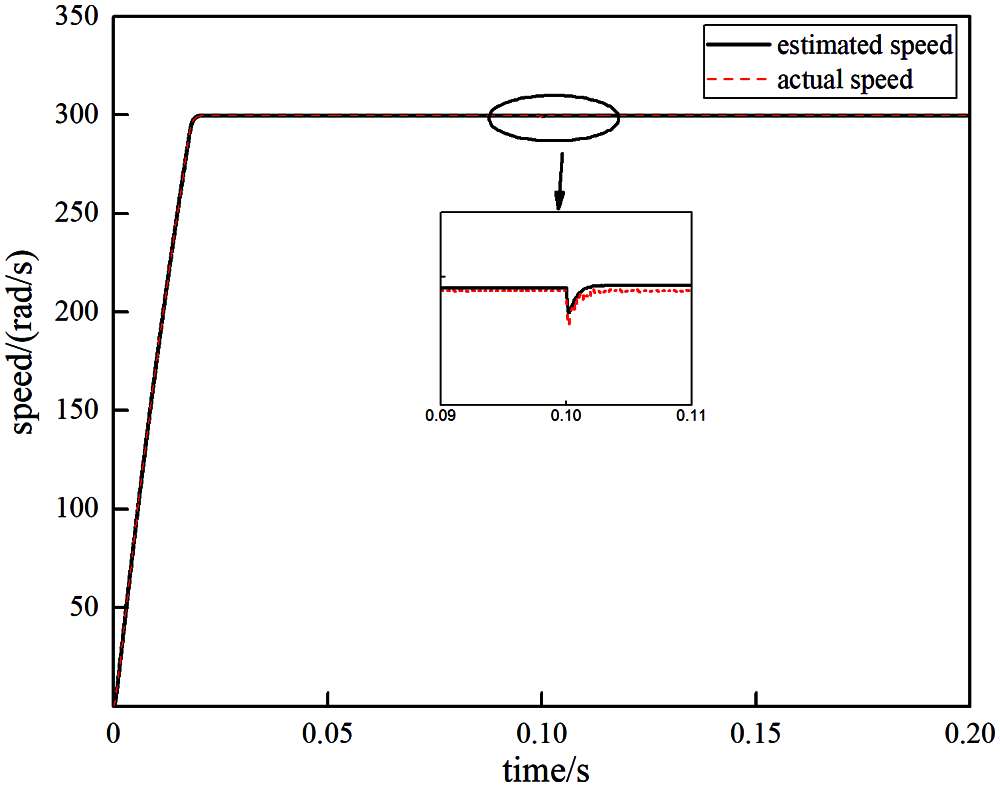 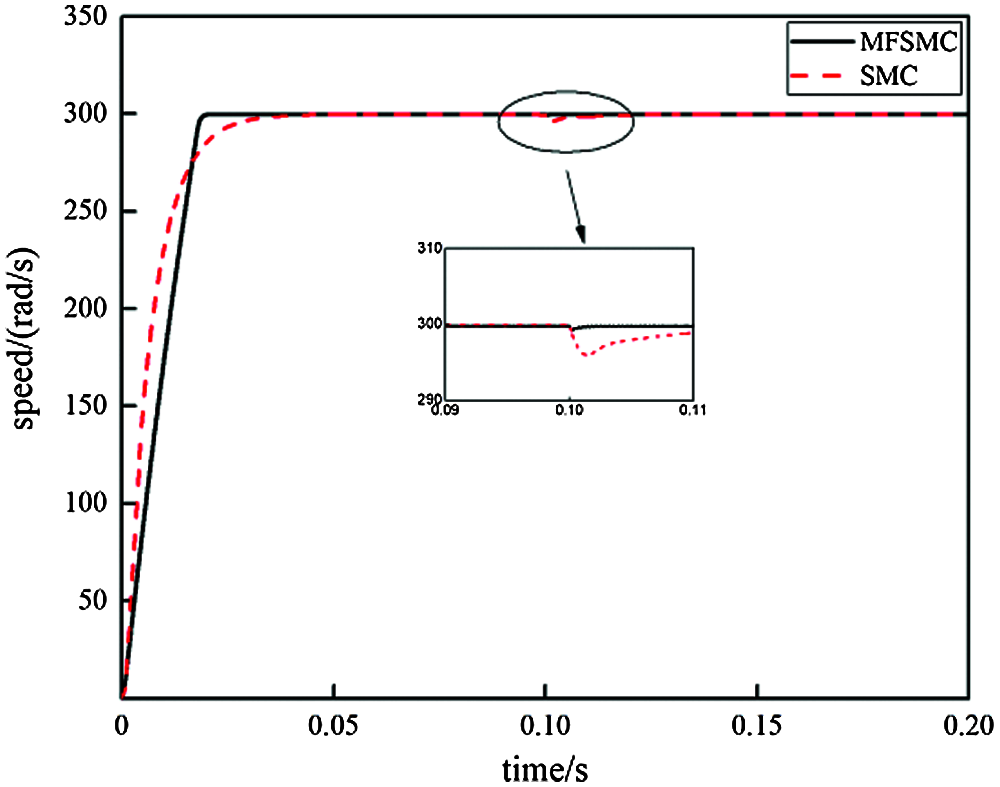 Figure 5: Comparison diagram of speed controlled by MFSMC and SMC 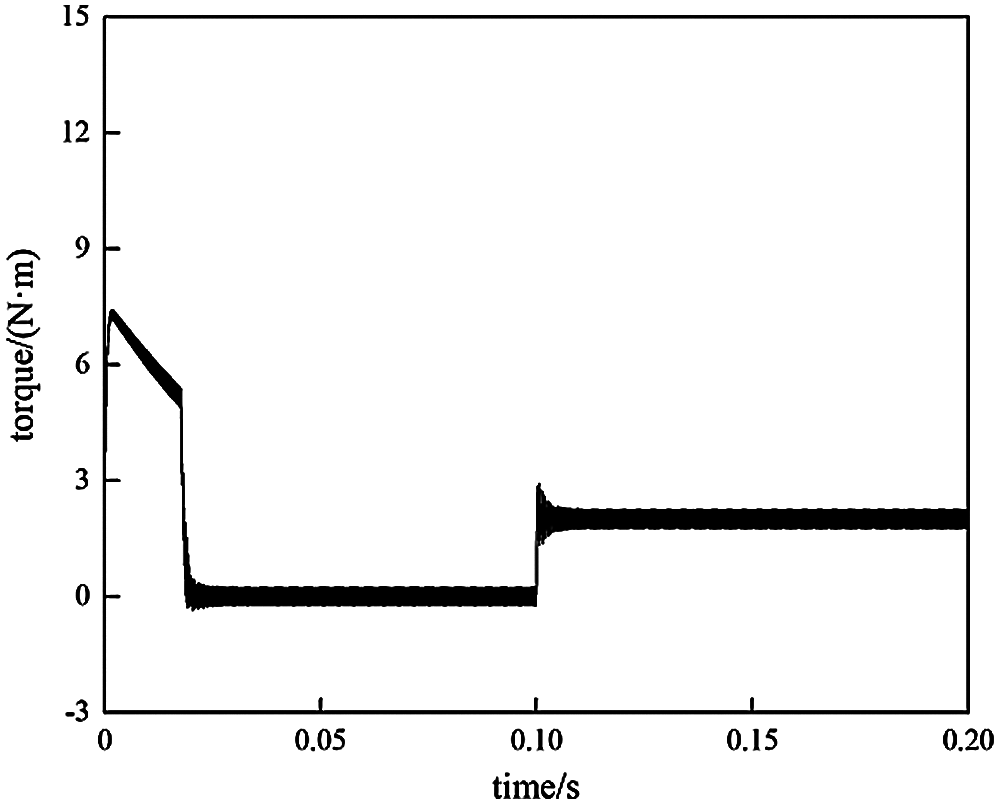 The hardware-in-the-loop simulation (HILS) experiments are carried out on an RT-Lab platform [7]. The HILS platform consists of a host computer, a DSP controller TMS320F2812, and an OP5600 simulator (Fig. 8a). Fig. 8b shows the RT-Lab HILS configuration diagram for the PMSM control systems. The experimental results are shown in Figs. 9–12. 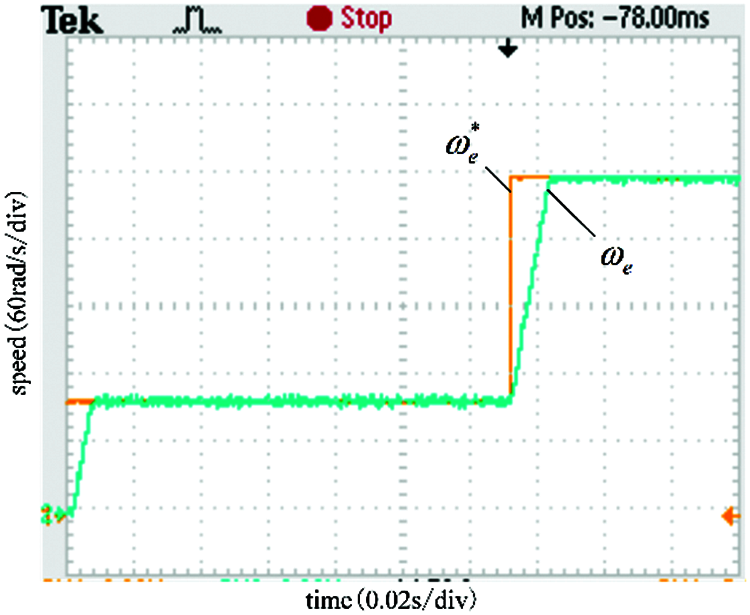 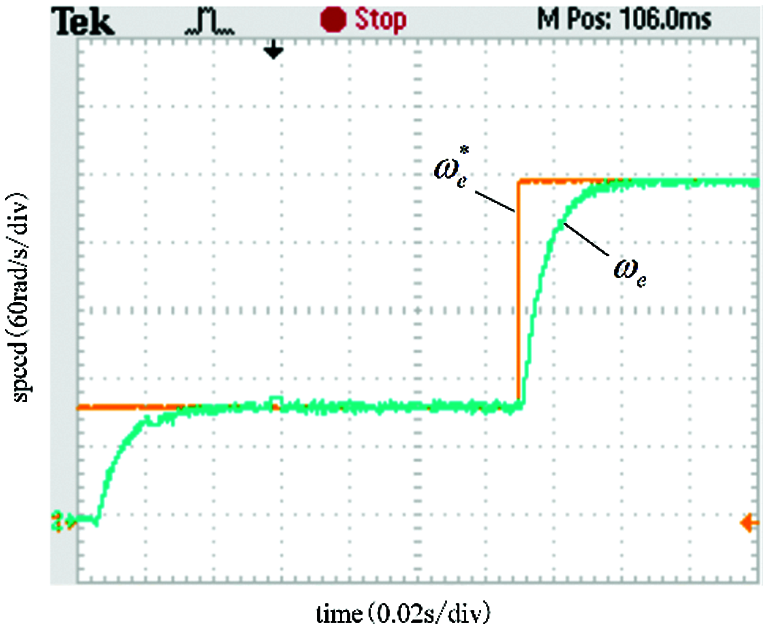 The above results (Figs. 4–11) for the SMC and MFSMC were summarized in Table 2. 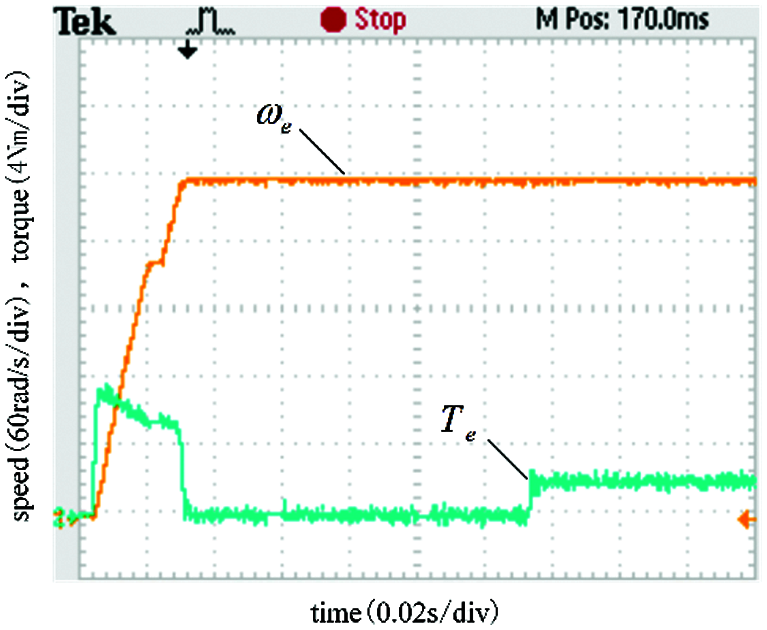 Figure 11: Experimental results of speed and torque controlled by MFSMC 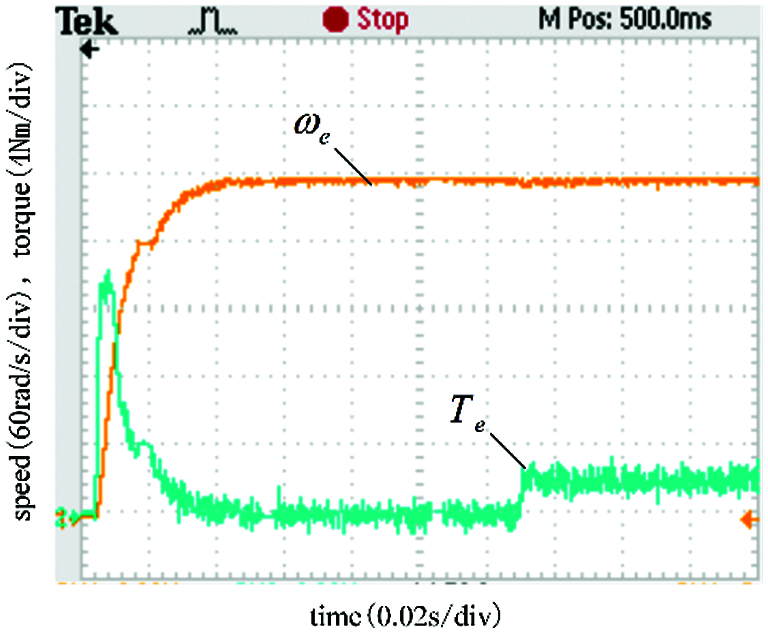 Figure 12: Experimental results of speed and torque controlled by SMC

This paper presented a novel MFSMC method to improve the speed response and robustness of the PMSM drive system. The ULM of the speed loop in PMSM is established based on the input and the output of the PMSM drive system. The MFSMC speed controller is designed based on ULM, and the SMO is designed to estimate the unknown part of ULM. The estimated unknown part is feedbacked to the controller to compensate for parameter perturbations and external disturbances. Compared with the SMC method, the results of simulation and experiment prove the presented method has excellent speed control performance and operates well. The MFSMC method has independence on the precise model of PMSM, and has faster response speed and strong robustness than the SMC method.