Abstract: The reservoir is the networked rock skeleton of an oil and gas trap, as well as the generic term for the fluid contained within pore fractures and karst caves. Heterogeneity and a complex internal pore structure characterize the reservoir rock. By introducing the fractal permeability formula, this paper establishes a fractal mathematical model of oil-water two-phase flow in an oil reservoir with heterogeneity characteristics and numerically solves the mathematical model using the weighted least squares meshless method. Additionally, the method's correctness is verified by comparison to the exact solution. The numerical results demonstrate that the fractal oil-water two-phase flow mathematical model developed using the meshless method is capable of more accurately and efficiently describing the flow characteristics of the oil-water two-phase migration process. In comparison to the conventional numerical model, this method achieves a greater degree of convergence and stability. This paper examines the effect of varying the initial viscosity of the oil, the initial formation pressure, and the production and injection ratios on daily oil production per well, water cut in the block, and accumulated oil in the block. For 10 and 60 cp initial crude oil viscosities, the water cut can be 0.62 and 0.80, with 3100 and 1900 m3 cumulative oil production. Initial pressures have little effect on production. In this case, the daily oil production of well PRO1 is 1.7 m3 at 7 and 10 MPa initial pressure. Block cumulative oil production is 3465.4 and 2149.9 m3 when the production injection ratio is 1.4 and 0.8. The two-phase meshless method described in this paper is essential for a rational and effective study of production dynamics patterns in complex reservoirs and the development of reservoir simulations of oil-water flow in heterogeneous reservoirs.

The reservoir is the network of rock skeletons that surround a sealed oil and gas trap, as well as the generic term for the fluid contained in pore fractures and karst caves. The heterogeneity and complexity of reservoir rock have a significant effect on reservoir physical properties such as flowability, reservoir capacity, and rock particle adsorption capacity. To maximize recovery, it is necessary to master the situation of underground reservoirs as much as possible during oil field development [1]. However, because the reservoir's porous media are largely disordered, it is impossible to accurately describe the reservoir's actual characteristics when the reservoir is approximated as a homogeneous model. The introduction of fractal theory enables us to better understand the pore results and transport properties of porous media [2]. Thus, over the last two decades, extensive research on the transport characteristics of porous media in oil reservoirs based on fractal theory has been conducted in the field of petroleum engineering [3].

Mandelbrot pioneered the concept of a fractal, which is used to describe the geometry found in nature that is self-similar and has no feature length [4]. In 1985, Katz et al. [5] demonstrated that sandstone interstitial space and pore surface exhibit favorable fractal characteristics through a large number of data analyses. The relationship between fractal dimension and rock porosity can be determined using the derived formula, and the porosity value can be calculated using a logarithmic curve [5]. Chang et al. pioneered the application of fractal theory to porous media mechanics, proposing the use of fractal dimension and fractal index to describe the complexity of porous media pore structure, and establishing the fractal Flow model of reservoir, which is used to reflect the reservoir's dynamic characteristics [6].

The majority of the research on fractal reservoirs discussed above makes use of numerical models based on grid systems, such as the finite difference method (FDM) and the finite element method (FEM) [7]. To provide an accurate description of the morphology and laws governing heterogeneous reservoirs, A large number of grids must be divided in the grid system, and the processing before and after is time-consuming, as is the calculation. This paper employs a meshless numerical model to create a stable, reliable, and accurate numerical model [8]. This method is a meshless version of the weighted least squares method (MWLS) [9]. In comparison to the finite difference and finite element methods, this method has the advantages of avoiding grid generation, requiring minimal data preparation, and allowing for convenient handling both before and after. The first meshless method was proposed by Lucy [10] in 1977 and successfully applied to astrophysical problems. Later that year, in 1996, Spanish researchers E Onate proposed the finite point method (FPM) [11]. This method constructs the shape function using the moving least squares principle and discretizes it using the collocation scheme; it is a completely meshless method that does not require a background grid and is primarily used in the field of fluid mechanics. Atluri et al. [12] and colleagues proposed the Meshless Local Galerkin method in 1998, which eliminated the need for a background grid when integrating. For the first time, Yousef et al. [13] applied the MWLS method to a complex fault block hydrocarbon reservoir numerical good test and obtained satisfactory results in terms of calculation accuracy and efficiency. Xu et al. [14] used fractal theory to characterize the permeability and porosity of horizontal shale gas fracturing wells, although they solved the gas-water two-phase flow model using the weighted least squares meshless method [15].

This Paper introduces the fractal permeability expression, establishes a numerical model of fractal oil reservoir two-phase, and solves it using the weighted least squares meshless method (MWLS). Relevant examples are provided to demonstrate the accuracy and benefits of this method.

(1) Assume that the outer boundary of the reservoir is closed; (2) Fluid and rock micro-compressibility; (3) Isothermal flow event, ignoring heat dissipation; (4) The model applies to oil-water two-phase, and the two are not mixed; (5) Ignore the influence of capillary force.

The distribution of reservoir porosity and permeability conforms to the following rules:

The time items of the above Eqs. (1) and (2) can be sorted out by difference. The following Eq. (5) can be obtained

Among them, , are the mobility of the oil phase and the water phase at the nth moment, ,

In Eqs. (6) and (7), the sum refers to the residual quantity of pressure equation and water saturation equation.

The MWLS form of the oil phase pressure equation can be obtained as follows:

Based on the theoretical research described above, a two-dimensional oil-water two-phase numerical simulation model with fractal properties is established. The model is 100 m ∗ 100 m ∗ 10 m in size, with the injection well IN1 in the center, the production wells distributed around it, an injection rate of 20 m3/day, a recovery rate of 5 m3/day, and a production time of 200 days. The model's permeability distribution is depicted in Fig. 1. The model's heterogeneous characteristics are readily apparent. The distribution interval for this paper is 5 m, and Table 1 contains some physical property information. The weighted least squares meshless method is used in this paper, and the node influence domain is set to three. 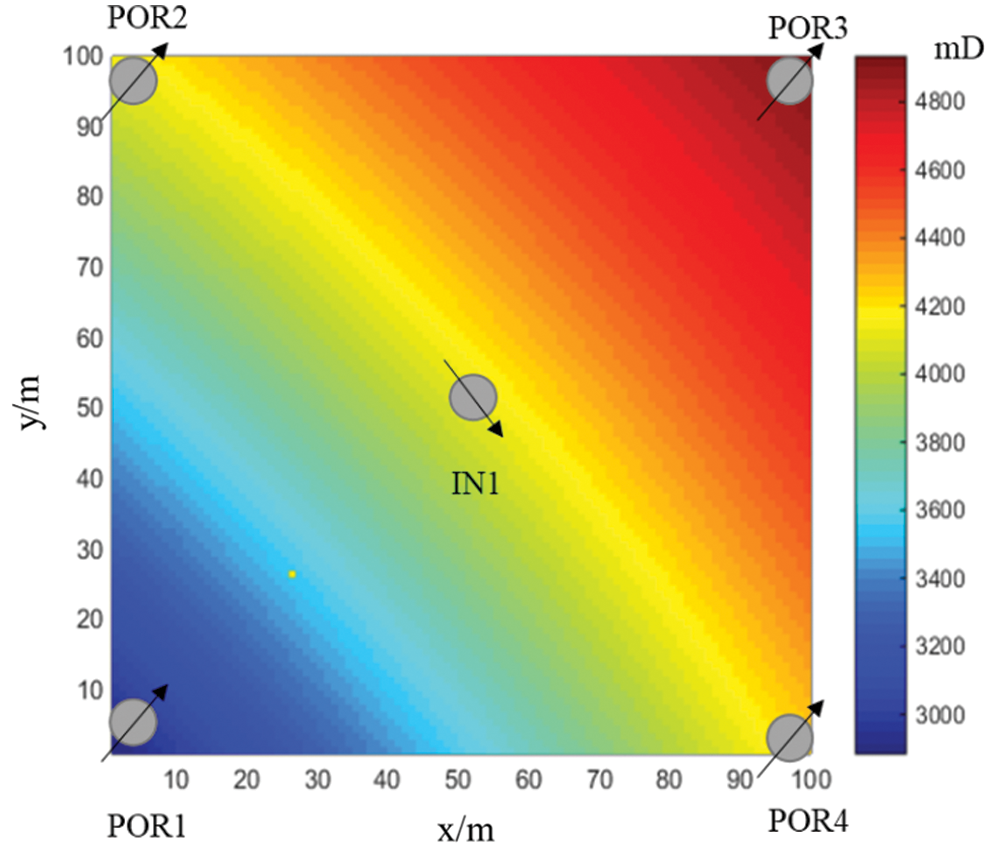 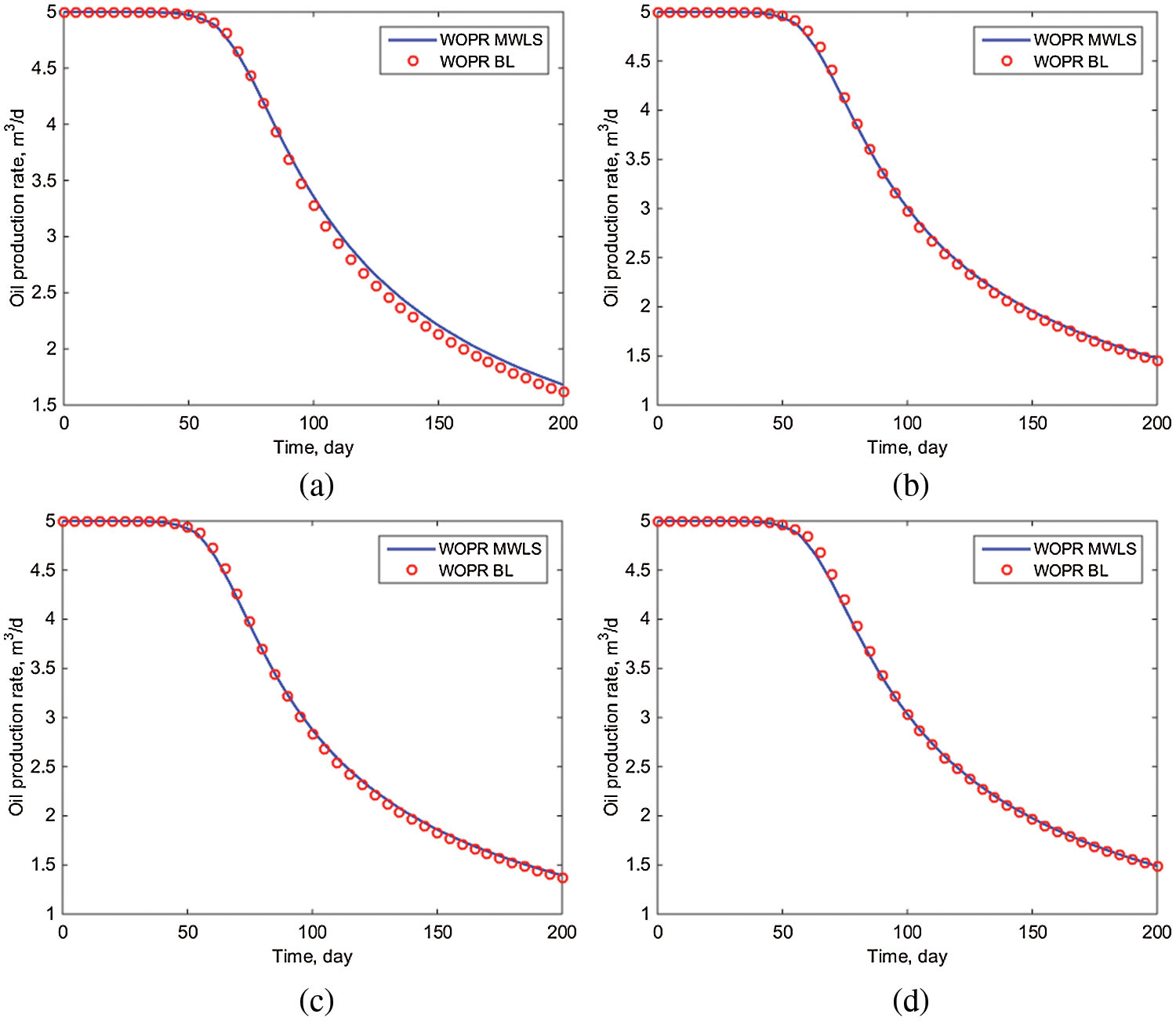 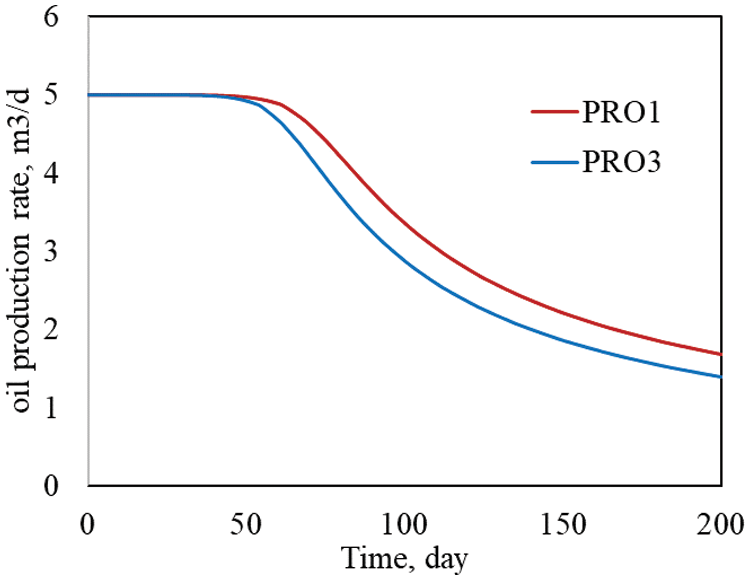 Figure 3: Comparison of the oil production rate of #PRO1 and #PRO3

Sensitivity analysis is performed on the initial crude oil viscosity, initial water saturation, initial pressure, and other parameters that affect the production dynamic data, and then the correctness of this method is verified in the numerical solution of fractal reservoir oil-water two-phase flow using the above-mentioned theories and methods. 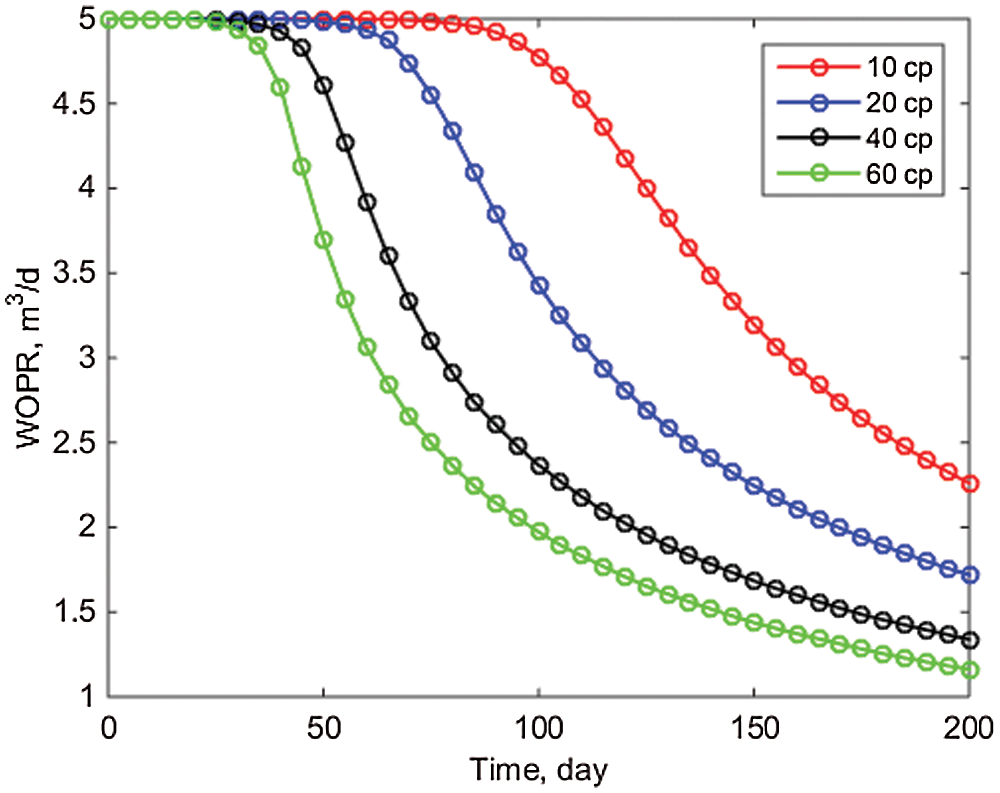 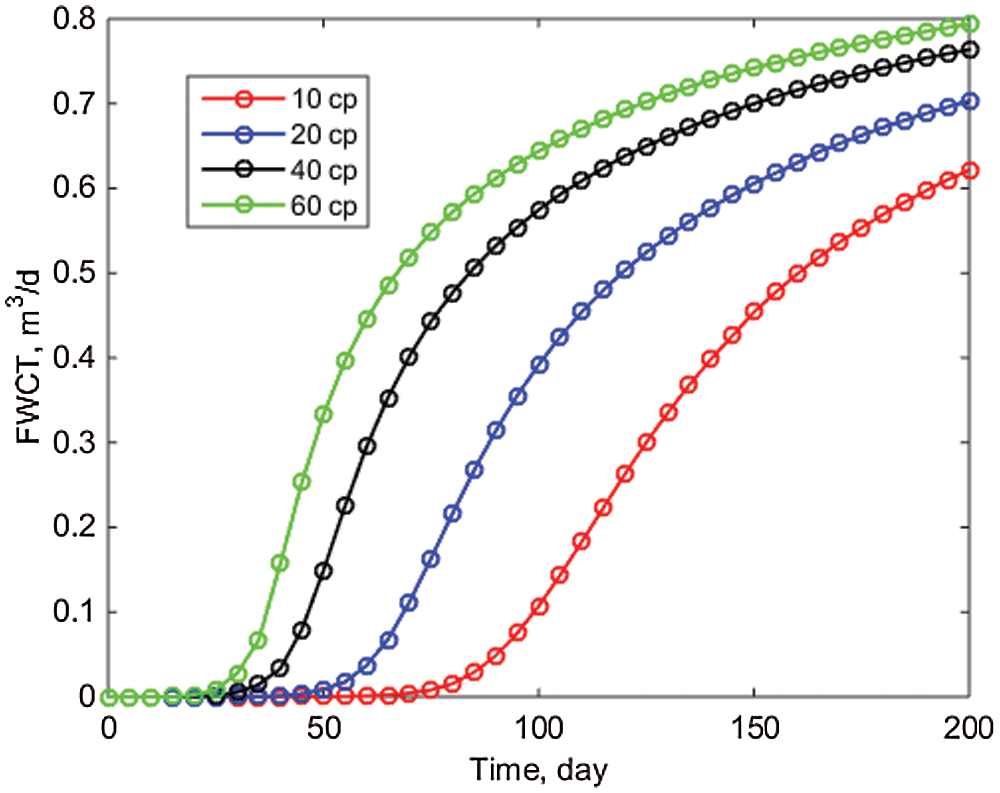 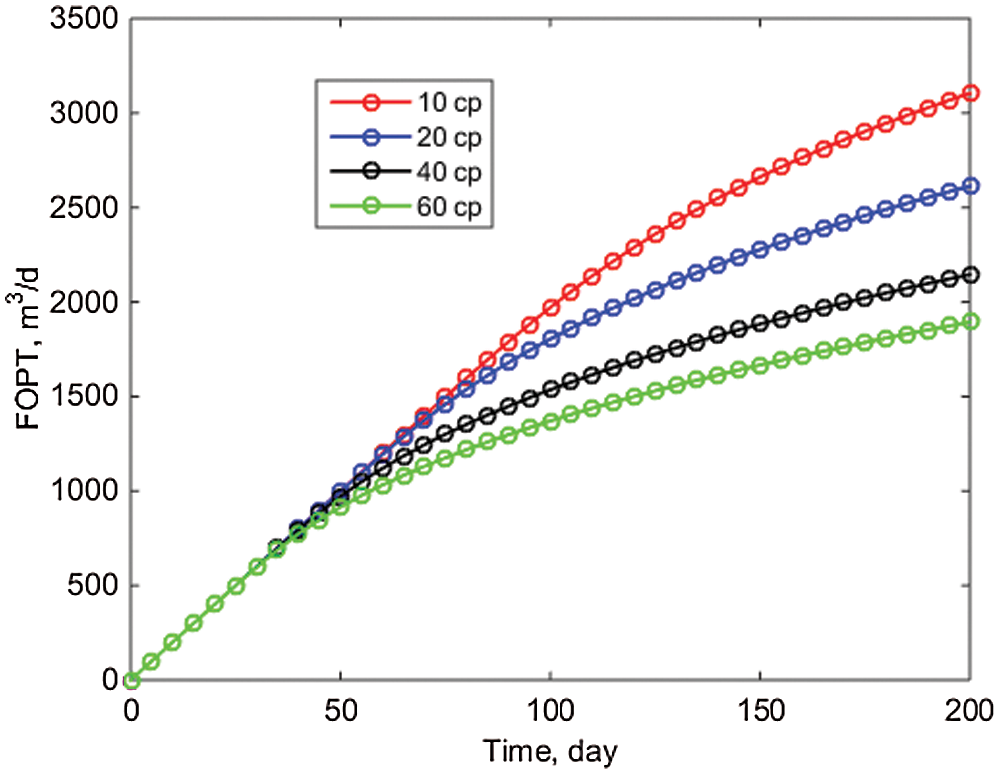 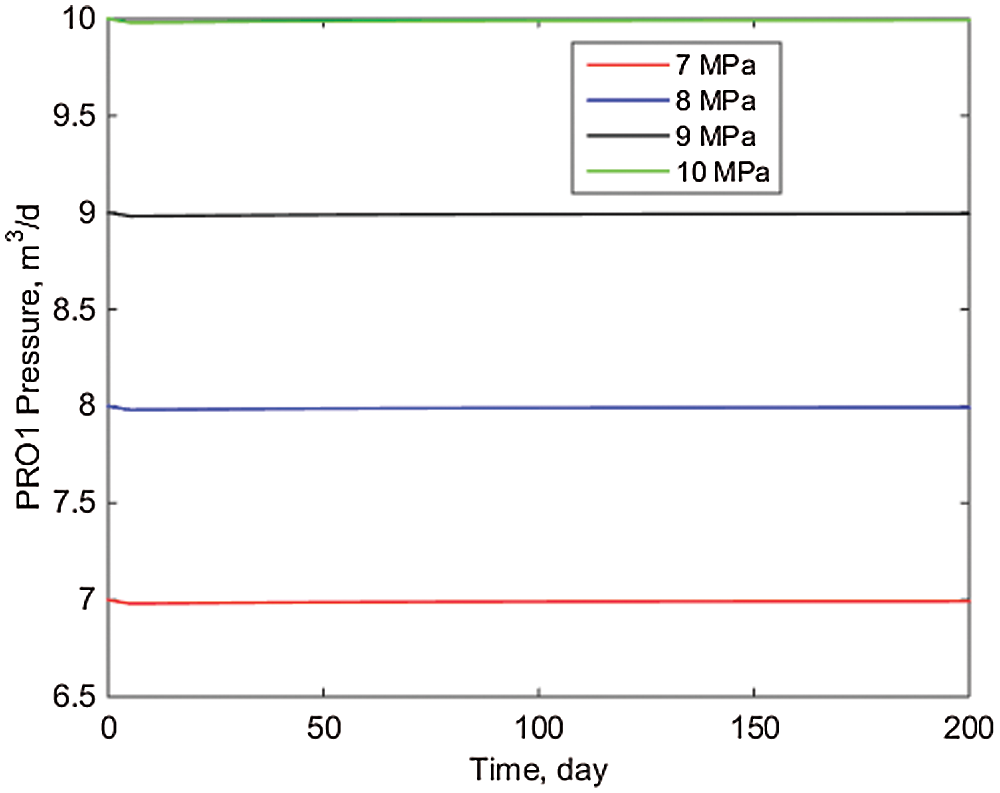 4.3 Effect of Injection and Production Parameters

In actual reservoir production, injection-production parameters are critical for maximizing economic benefits. The injection volume is kept constant in this paper, and simulations using the production-injection ratios of 0.8, 1.0, 1.2, and 1.4 are used to ensure that all other physical parameters are consistent with Table 1. The weighted least squares meshless method makes use of a Gaussian basis function and a three-dimensional node influence domain. The fractal index is −0.15, and the fractal mass dimension is 2.0. 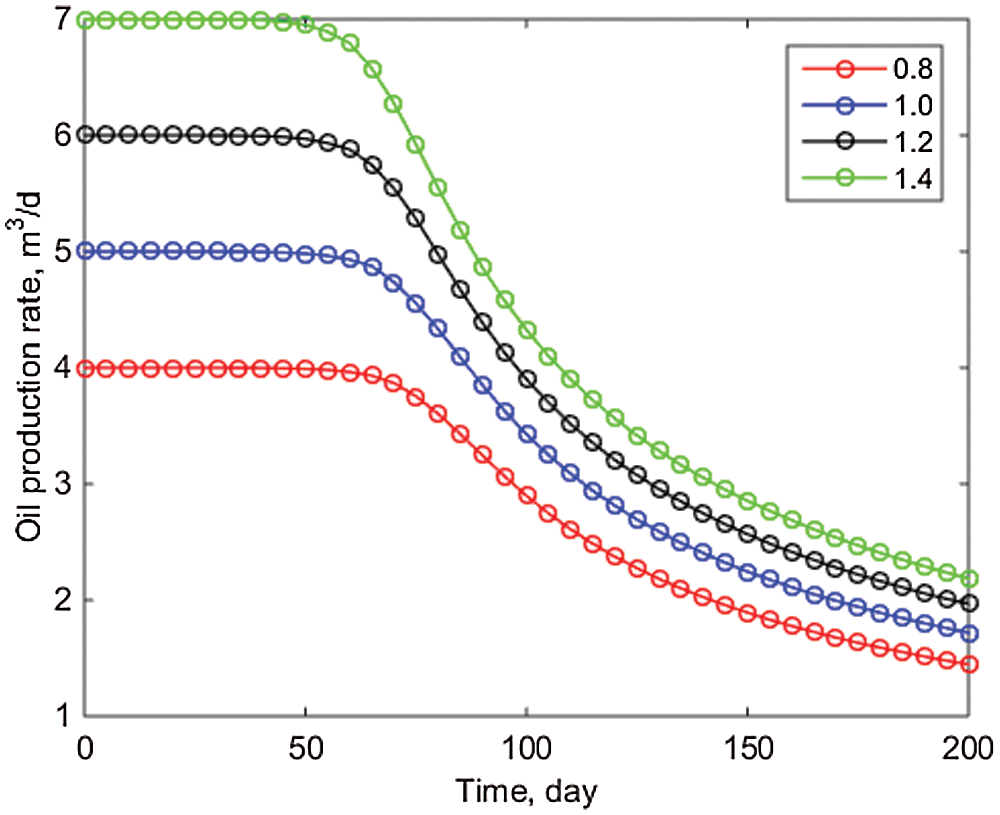 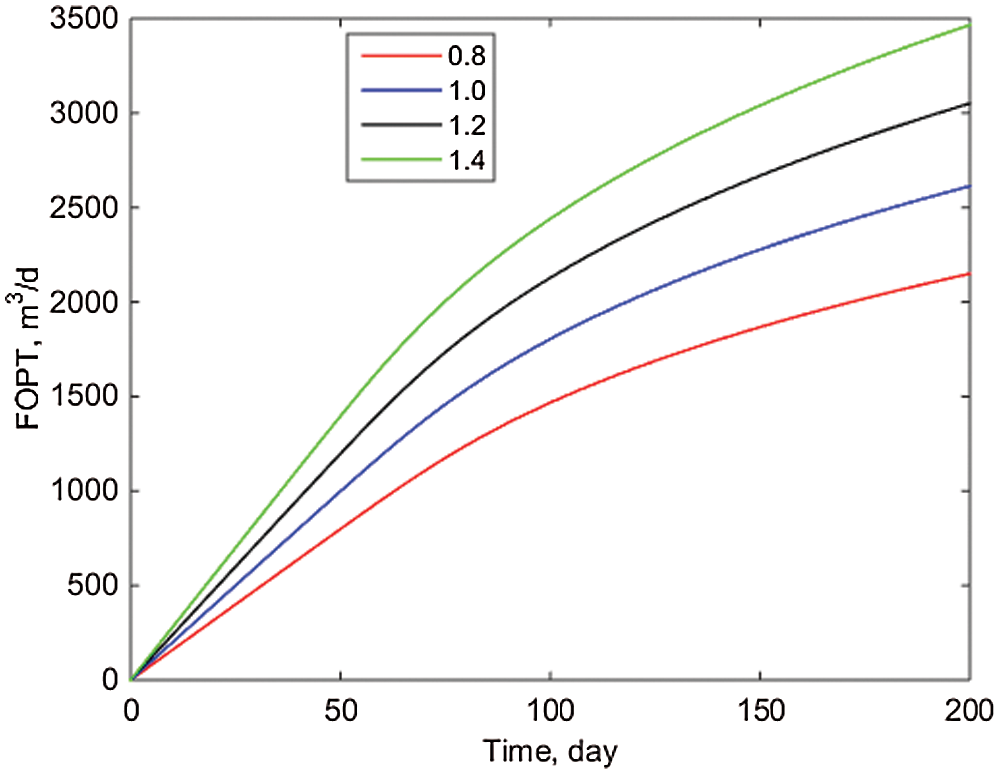 The weighted least squares meshless method is introduced in this paper to solve an oil reservoir oil-water two-phase flow model with fractal characteristics. The fractal permeability formula is used to establish a fractal mathematical model of oil-water two-phase flow in an oil reservoir that takes heterogeneity into account, and the mathematical model is numerically solved using the weighted least squares meshless method. The following are the major conclusions:

(1)   According to the model developed in this paper, the difference between this method and the analytical model is only 2%. The numerical results demonstrate that using the meshless method, the fractal oil-water two-phase flow mathematical model can more accurately and efficiently describe the flow characteristics of the oil-water two-phase migration process.

(3)   This paper investigates the effect of different initial formation pressures on the daily output of a single well and the pressure of a single well, concluding that different initial formation pressures do not affect the output. This is consistent with the objective understanding that differential pressure drives oil-water two-phase flow in reservoir production. In this example, the daily oil production of well PRO1 is 1.7 m3 in 200 days when the initial pressure is 7 and 10 MPa.