Abstract: Microarray cancer data poses many challenges for machine-learning (ML) classification including noisy data, small sample size, high dimensionality, and imbalanced class labels. In this paper, we propose a framework to address these problems by properly utilizing feature-selection techniques. The most important features of the cancer datasets were extracted with Logistic Regression (LR), Chi-2, Random Forest (RF), and LightGBM. These extracted features served as input columns in an applied classification task. This framework’s main advantages are reducing time complexity and the number of irrelevant features for the dataset. For evaluation, the proposed method was compared to models using Support Vector Machine (SVM), k-Nearest Neighbor (KNN), Decision Tree (DT), LR, and RF. To prove the proposed framework’s efficiency, all the experiments were performed on four standard datasets, encompassing two binary and two multiclass imbalanced-microarray cancer datasets: Lung (5-class dataset), Small Round Blue Cell Tumors (SRBCT; 4-class dataset), and Ovarian and Breast Cancer 2-class datasets). The experimental results of our comparison showed that the proposed framework achieved the highest predictive performance. A comparative study of our framework, using accuracy and F1 as metrics, was performed against state-of-the-art approacheswhich illustrated that the proposed method presented a better result for two of the selected datasets.

The analysis of microarray data involves such challenges as small sample size, high dimensionality, and multiclass-imbalance problems [1]. In real-world datasets, the multiclass-imbalance problem is a known issue where the number of samples of one or some classes are larger than the others. This results in a reduction of the performance of the classification model for minority classes [2]. Several machine-learning (ML) algorithms expect the dataset to have a balanced class distribution [3]. Feature-selection techniques are used to reduce issues related to this and the high rate of cancer-data dimensionality. Consequently, conducting research in this area is required and possible for different disciplines, such as statistics, computational biology, and ML [4].

When building a ML model, it is hard to identify what distinguishes between important and unimportant features, as shown in Fig. 1 [5]. Removing unimportant features has many benefits, such as reducing memory and computational cost, maximizing accuracy, and avoiding the overfitting problem during the training stage [6,7]. A few features can be useful for one algorithm (for example, Decision Tree [DT]), but they may not be helpful for another model, such as a regression model. Moreover, irrelevant features can negatively affect the model’s performance. Data preprocessing and feature selection are the most significant steps in designing and selecting the best model for a specific problem [8].

The feature-selection technique is applied to carefully choose the best subset of features to attain an identical or higher classification performance [9]. The primary types of feature-selection techniques are filter, wrapper, embedded, feature shuffling, and hybrid. The main goals for these methods are to increase the model’s performance, reduce training time, avoid overfitting problems, and decrease the input datas dimensionality. Although feature selection has certain disadvantages, it is an essential preprocessing technique ML because it generates extra information and provides an intuitive understanding of the typical pattern before the proposed classifier is used [10,11].

ML feature-selection techniques can be broadly classified into the following common method categories, as shown in Tab. 1: filter, wrapper, embedded, and hybrid [12]. Each method has its weaknesses and strengths, depending on the shape of the data and the classifier used to solve the problem at hand. The main differences between the filter and wrapper methods are presented in Fig. 2.

The main contributions of this paper are as follows:

•      Setting the main goals of the proposed model as increasing performance, reducing training time, avoiding the overfitting problem, and decreasing the dimensionality of the input data

In this section, the proposed framework is described. The ensemble ML models based on the robust classifiers for microarray-cancer-data classification are presented. Generally, in any classification problem, the model uses the collected dataset for training and testing. The k-fold cross-validation (CV) technique was used to measure the classifier’s average performance in order to address the problem of overfitting during the training phase; the basic idea of the k-fold CV technique is that it iteratively trains each sample four times and tests at the fifth iteration. A grid-search technique, which selected the best parameters based on the k-fold CV, was used to increase the ML models’ performance, and the range of parameter values was set. The proposed framework’s workflow is presented in Fig. 3, which depicts the cancer data, feature-selection methods, and classifiers trained using the original and reduced feature sets. Model evaluation was applied to the test samples. 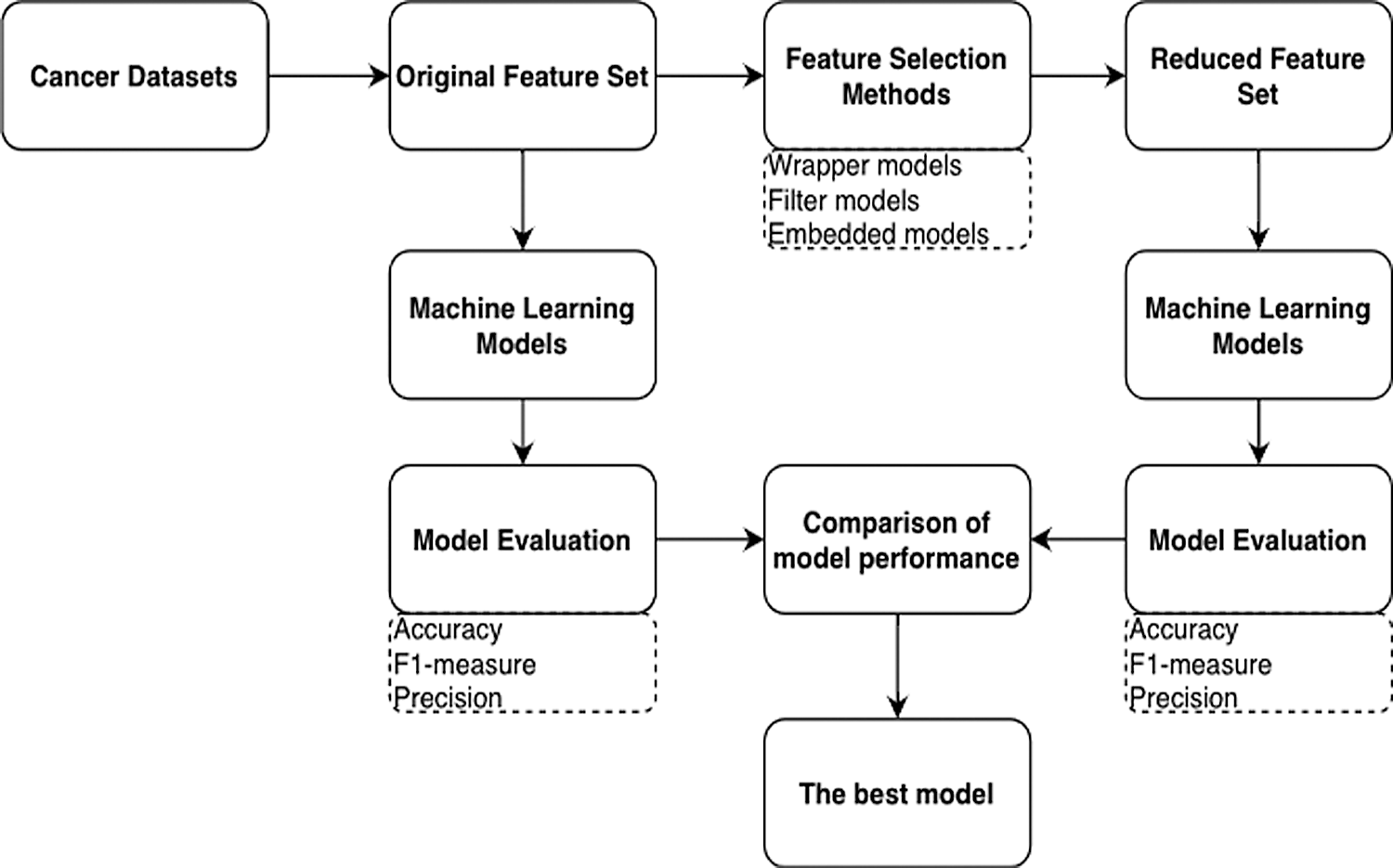 Recently, feature-selection techniques have taken on a primary role in assisting with microarray-dataset classification. These methods are used to handle many problems, such as long running time, overfitting, and memory usage. Information gain is an important technique to use with filter methods that calculate each feature’s importance by ranking pertaining to class label [4]. With this method, which quantifies the information obtained from each feature, important features receive a higher value and rank, whereas irrelevant features receive a rank of zero [21].The focus is to find an attribute that provides the largest amount of information gain by ranking the features in accordance with their relevance. Information gain is a measure of the change in entropy, which is calculated with Eq. (1):

S represents the set of samples, X is a feature, |S| is the size of S instances, and Sv stands for a subset of S, such that Xv = v and Values(X) refers to the set of all possible values of the X attribute. Entropy is a measure used to compute how pure or mixed a given attribute is in the distribution. The entropy of each feature is mathematically computed, as shown in Eq. (3):

E represents the entropy value, S denotes the sample size, X is a feature, and pi is the probability.

In this section, the experimental results are discussed. All experiments were performed using the four known binary and multiclass-microarray datasets. To measure the performance of the ML model, a five-fold CV technique was used to calculate the mean accuracy and standard deviation of the five-fold evaluation results.

Tab. 3 presents the top-10 features of the Breast Cancer datasetthe amount of times each was selected, and the results of different feature-selection models applied to the dataset. A value of “True” means the feature was selected using the corresponding algorithm; for example, NM_020974 was selected by all the algorithms.

Table 3: The top 10 features of Brest Cancer dataset and the count of the selected times for each features 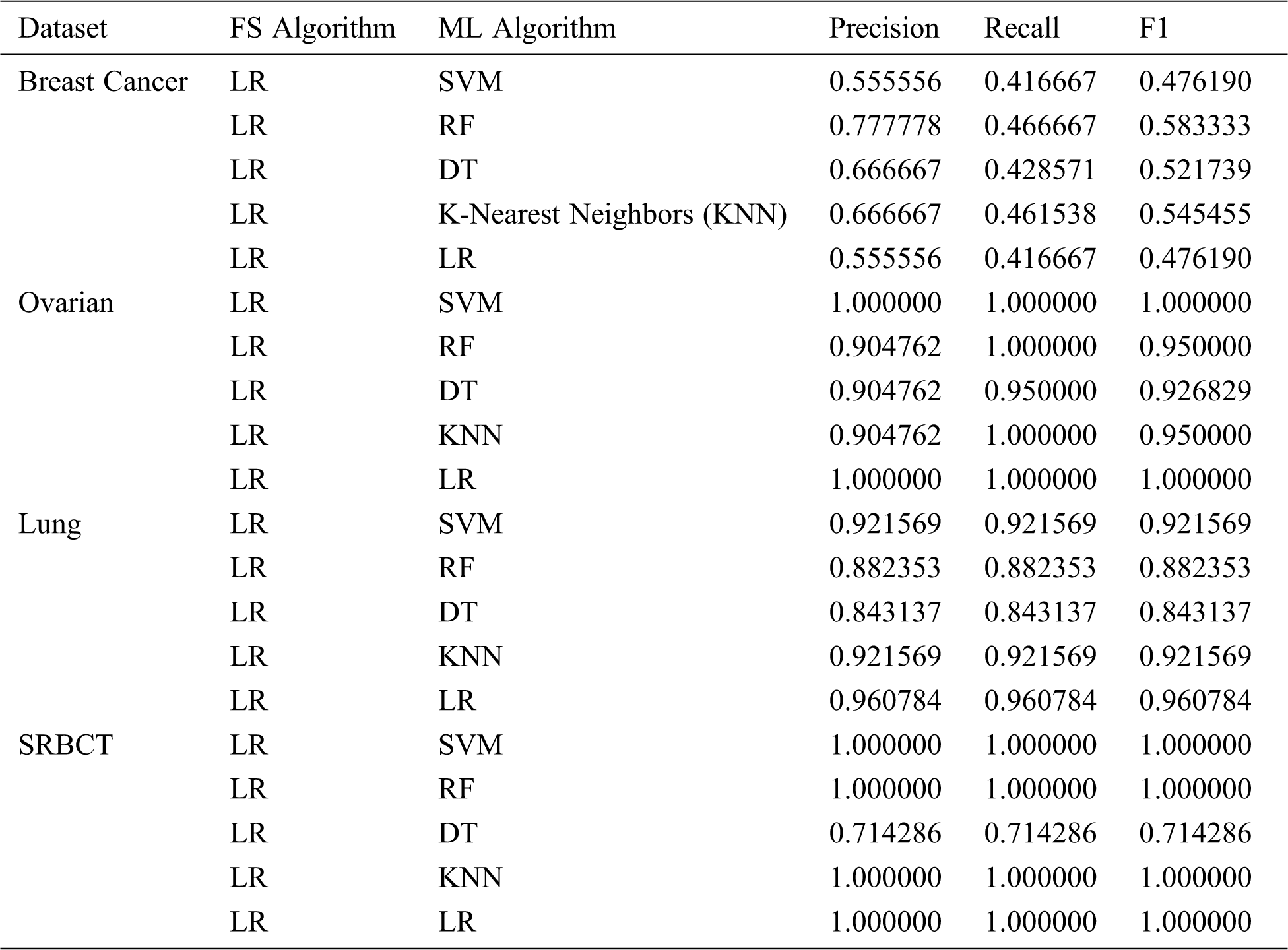 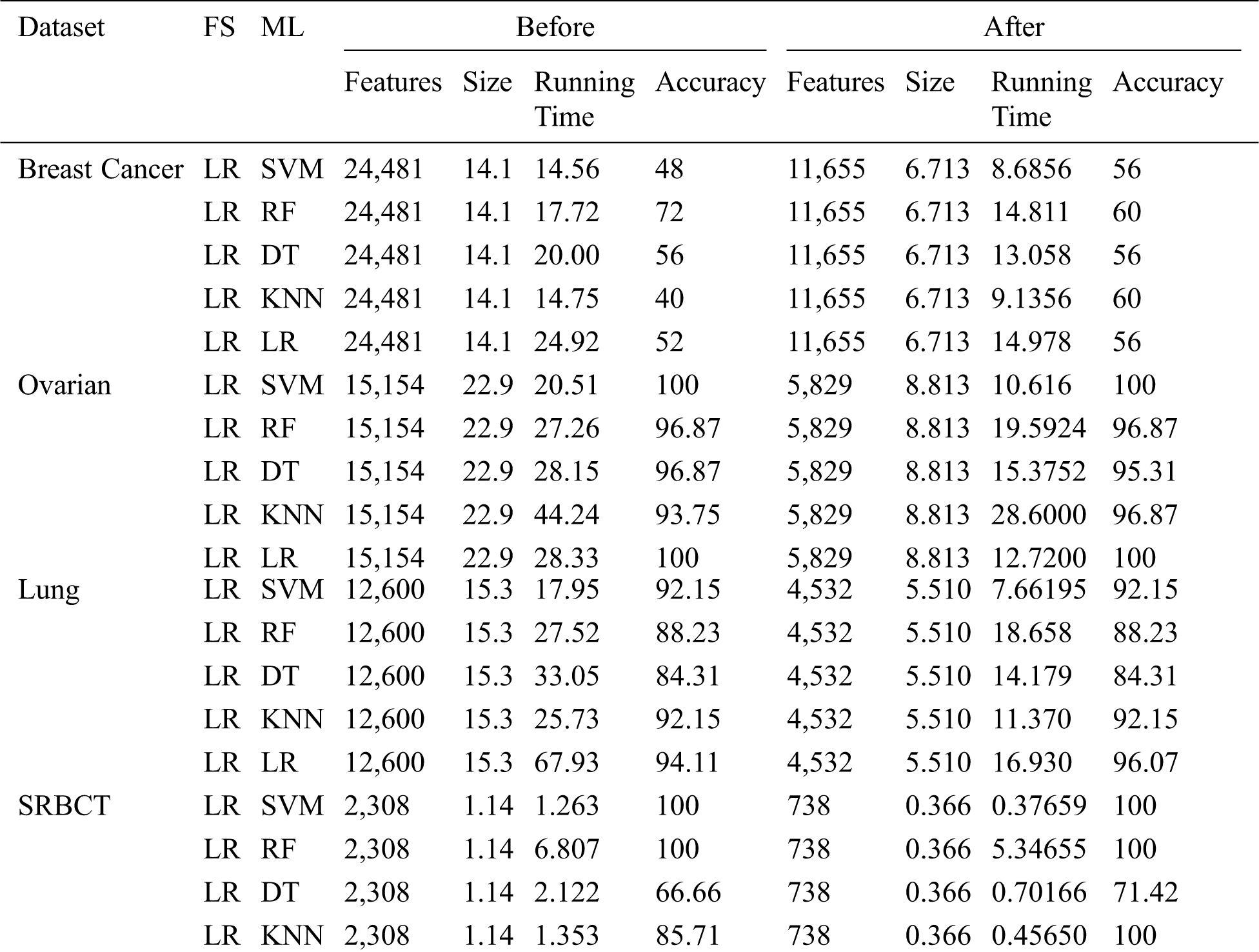 A comparative study was performed against state-of-the-art models, and the best results in terms of accuracy were seen with two of the selected datasetsSRBCT and Ovarian with each model scoring 100 percent. The works of Liu et al. [16] and Shekar et al. [26] scored 99 percent and 100 percent in accuracy, respectively, as presented in Tab. 6.

Table 6: Comparative study of the proposed method against state-of-the-art models

The paper addresses the challenges prevalent in cancer-microarray datasets, such as high dimensionality, small sample size, and imbalanced class labels. Feature-selection techniques based on the ML models were introduced. In the framework, the most important features of the cancer datasets were extracted with LR, Chi-2, RF, and LightGBM. They were then used as input columns in the classification task. The main advantage of this framework is reducing the time complexity and the number of irrelevant features in the dataset. The proposed method was compared with KNN, SVM, DT, LR, and RF in experiments performed on four standard multiclass-microarray cancer datasets. The results showed that the proposed method is more effective in predictive capability. A comparative studymeasuring the accuracy and F1 of our framework against state-of-the-art approaches demonstrated that the proposed method achieved a better result with four datasets.

Conflicts of Interest: The author declares that he has no conflicts of interest to report regarding the present study.