Electrorheological (ER) fluid is a kind of intelligent material whose rheological properties can be readily controlled using an external electric field, which is formed by dispersing polarizable particles in insulating liquid [1,2]. Under the action of external electric field, the dispersed polarizable particles will attract each other to form fibrous structure, which leads to the significant increase of viscosity, yield stress and shear modulus of the suspension [3,4]. These changes are fast and reversible with the transformation of external electric field. Therefore, ER fluid has a wide range of application prospects in many fields, especially in automotive, aerospace and medical industries [5,6].

The performance of ER fluids is closely related to the polarization ability of dispersed particles, and the shape of dispersed particles is an important factor [7]. One dimensional nanomaterials, such as nanowires and nanotubes, are attractive new functional materials. The unique structural characteristics of one-dimensional nanomaterials are that one direction is nano and the other is micron, which not only makes one-dimensional nanomaterials show many novel properties, but also provides a coupling bridge between nano system and micro system [8,9]. Titanium oxide (TiO2) and polyaniline (PANI) are considered to be the most promising two kinds of electrorheological materials [10–15] due to the high dielectric constant of TiO2 and the adjustable conductivity of PANI. However, the one dimensional nano structure of TiO2 and PANI, especially the one-dimensional composite nano structure of TiO2/PANI, is very difficult to synthesize, and the cost of preparation is very high.

In this paper, a novel one-dimensional PAL/TiO2/PANI nanocomposite was prepared by heterogeneous precipitation of titanium oxide [16] and in-situ polymerization of Aniline [17], using the natural palygorkite (PAL) rods with high aspect ratio and large surface area as the heterogeneous nucleation center. The physical properties and ER characteristics of the obtained samples were investigated by SEM, TEM, XRD, IR, LCR Tester and rheometer. The results showed that the PAL/TiO2/PANI particles were one-dimensional nano-structure and the phases of coating TiO2 and PANI shells were amorphous. Compared with pure TiO2 or PANI ER fluid, the polarization ability, electrorheological activity and suspension stability of PAL/TiO2/PANI ER fluid were significantly improved.

The PAL/TiO2 nanoparticles were prepared via the heterogeneous precipitation method [18]. 1.5 g PAL powder was dispersed in 400 ml absolute ethanol, placed in ultrasonic cell crusher for 30 min, and mixed with concentrated ammonia (2.30 ml, 28 wt%) to obtain PAL suspension. Then, 5 ml TBOT was added to the PAL suspension, and the reaction was allowed to proceed for 24 h under continuous mechanical stirring. After the reaction, the obtained milky white suspension was centrifuged, and the separated product was washed with ethanol for three times. Finally, the obtained white powder was dried in vacuum at 90°C for 20 h.

The PAL/TiO2/PANI composites were prepared by in-situ polymerization using the PAL/TiO2 as carrier. 1.0 ml aniline monomer and 1 g PAL/TiO2 were dispersed in 100 ml 0.1 mol/L HCl solution in a three-necked bottle. The mixtures were stirred with mechanical stirrers in ice water baths for 1 h to get a uniform suspension. Afterward, 100 ml pre-cooled 0.1 mol/L HCl solution containing 2.0 g APS was added by a peristaltic pump, and the reaction was allowed to proceed for 24 h under continuous mechanical stirring. After the reaction, the obtained blackish green suspension was centrifuged, and the separated product was washed with 50 wt% alcohol aqueous solution for three times. Finally, the obtained blackish green powder was dried in vacuum at 90°C for 20 h.

2.4 Synthetize of Pure TiO2 and PANI

The microstructure and particle size of the samples were analyzed by SEM (Hitachi S4800) and TEM (FEI Tecnai G2 F20). The X-ray diffraction patterns of the particles were measured on a Rigaku D/Max-A diffractometer with CuKα radiation. The Infrared spectrum of samples was analyzed by Perkin Elmer system 2000 spectrophotometer. The dielectric properties of ER fluids in the frequency range of 50–105 Hz were determined by LCR tester (HIOKI 3532). The electrorheology of the ER fluids at different DC electric field was determined by a circular plate rheometer (Haake RS6000).

The morphologies and microstructure of the samples were characterized by SEM and TEM analysis as shown in Figs. 1 and 2. It can be seen from Figs. 1a and 2a that the pure PAL was a rodlike fiber with a length up to several micrometers and a width of 30∼50 nm. After introducing titanium oxide via the heterogeneous precipitation coating method, it was obvious that the surface of nanorods became coarse, and titanium oxide nanoparticles with a diameter of several nanometers were uniformly distributed on the surface of PAL nanorods (Figs. 1b and 2b). The SEM and TEM images of the PAL/TiO2/PANI particles prepared by in-situ polymerization using the PAL/TiO2 as carrier are shown in Figs. 1c and 2c. The results indicated that the PAL/TiO2 particles had been successfully coated by PANI layers via the in-situ polymerization process and the thickness of the shell was about 20 nm.

Figure 3: The X-ray diffraction patterns of the PAL, PAL/TiO2 and PAL/TiO2/PANI

Figure 4: The FT-IR spectra of the TiO2, PANI and PAL/TiO2/PANI

The dielectric properties and polarizability of the particles are the key factors affecting the ER effect. Generally, a good ER effect requires a large dielectric constant difference Δε (Δε = ε100 Hz − ε100 Hz). The dielectric spectra of the TiO2, PANI and PAL/TiO2/PANI ER fluids in the frequency range of 50–105 Hz are shown in Fig. 5. The results show that the PAL/TiO2/PANI ER fluid has the highest dielectric constant difference Δε between 102 and 105 Hz. According to the mechanism of interface polarization [23,24], the larger Δε indicates that the ER fluid can form strong interaction between the particles of ER fluid under the action of external electric field and shear field, and maintain the high degree of chain structure formed by the particles. 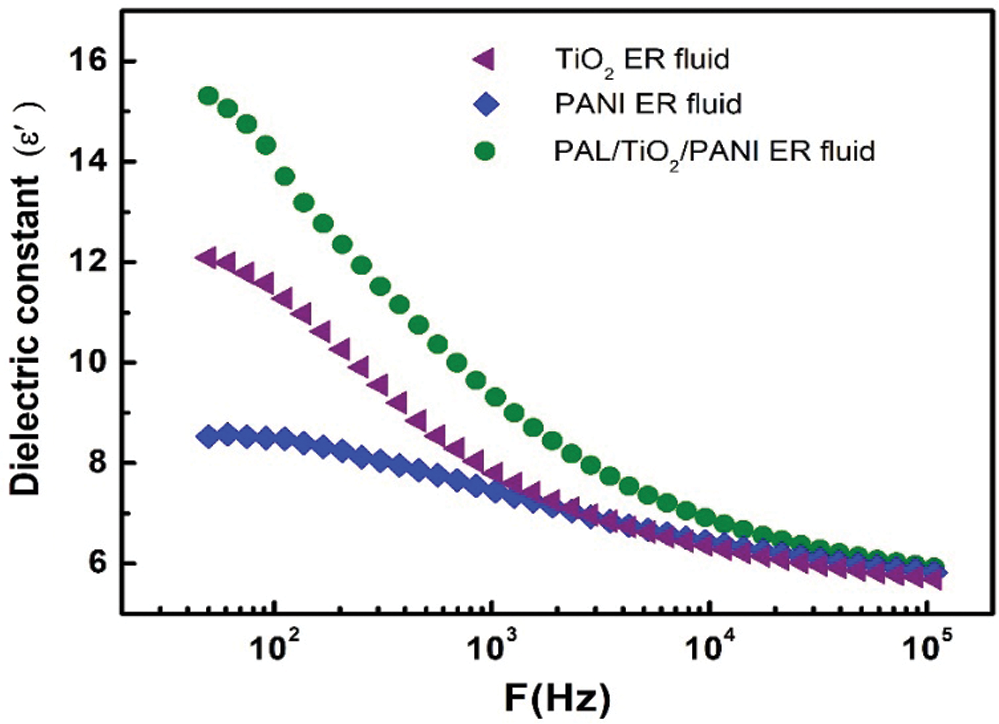 Figure 5: The dielectric spectra of the TiO2, PANI and PAL/TiO2/PANI ER fluids

Figure 6: The yield stresses of the ER fluids containing PAL, TiO2, PANI, PAL/PANI, PAL/TiO2 and PAL/TiO2/PANI nanoparticles under the action of different external electric field. The concentration of particles in ER fluid was 15 vol% 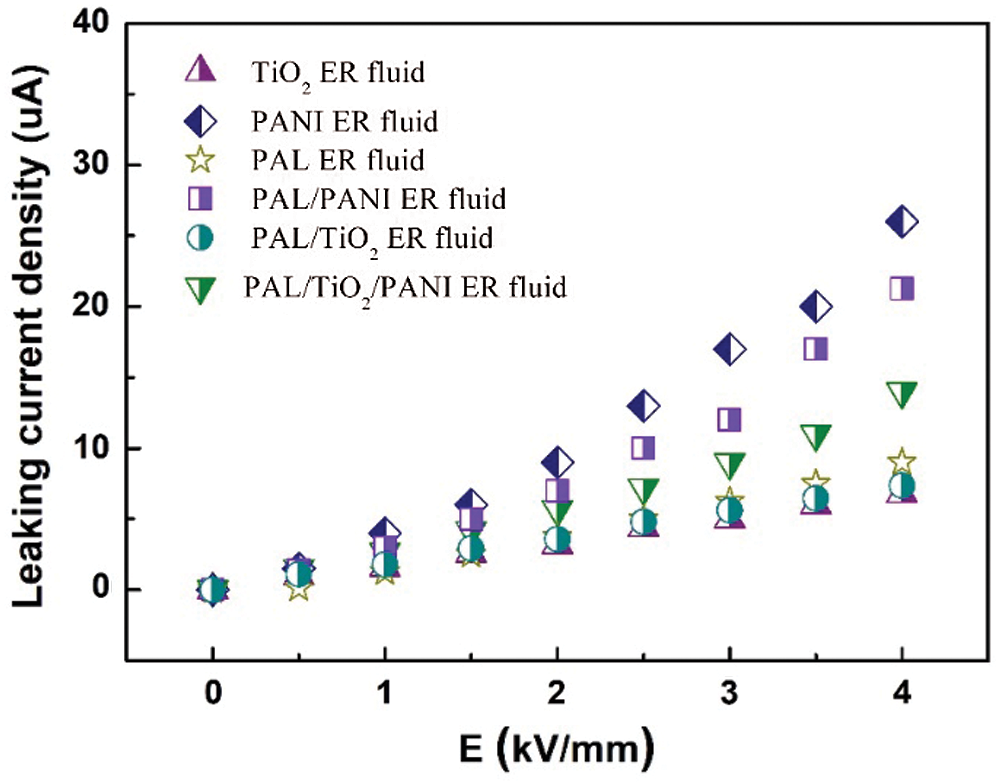 Figure 7: The leaking current density of the PAL, TiO2, PANI, PAL/PANI, PAL/TiO2 and PAL/TiO2/PANI ER fluids under different external electric field. The concentration of particles in ER fluid was 15 vol% 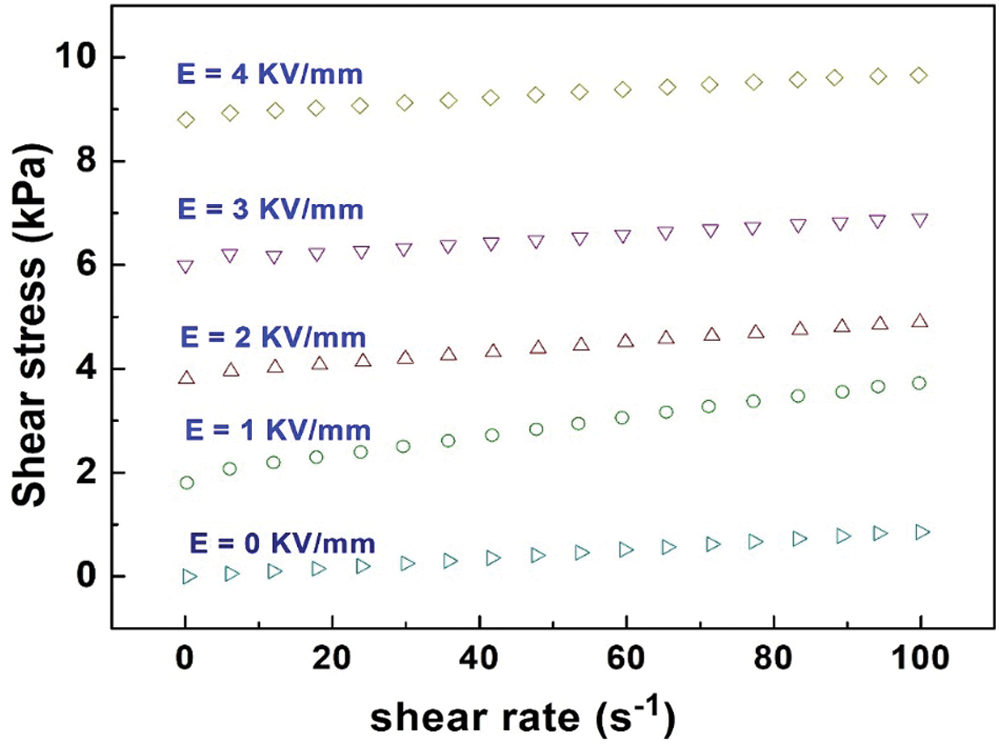 Figure 8: The shear stress of the PAL/TiO2/PANI ER fluid under different electric fields and shear rates. The concentration of particles in ER fluid was 15 vol%

Suspension stability, especially sedimentation resistance, is one of the important indexes to evaluate whether the material can be widely used, because the ER performance will decrease sharply with the deposition of particles. The suspension stability of ER fluid was characterized by sedimentation ratio test at room temperature. The time-dependent phase separation height between the particle rich phase and the relatively clear oil-rich phase was recorded in a flask. The settling ratio is defined by the percentage of the height of the rich phase relative to the total suspended height. The larger the sedimentation ratio, the better the suspension stability. Fig. 9 shows the sedimentation ratio of ER fluids containing TiO2, PANI and PAL/TiO2/PANI at room temperature. After 500 h, the sedimentation rates of TiO2 and PANI suspensions were 55% and 67%, respectively, while that of rodlike PAL/TiO2/PANI suspensions was 98%. The enhancement of the suspended stability should be attribute to the distinctive rodlike morphology of PAL/TiO2/PANI nanoparticles. The large aspect ratio is beneficial to the support between fibrous particles and avoids the large agglomeration of particles. However, it is difficult to establish a supporting role in spherical like particles. 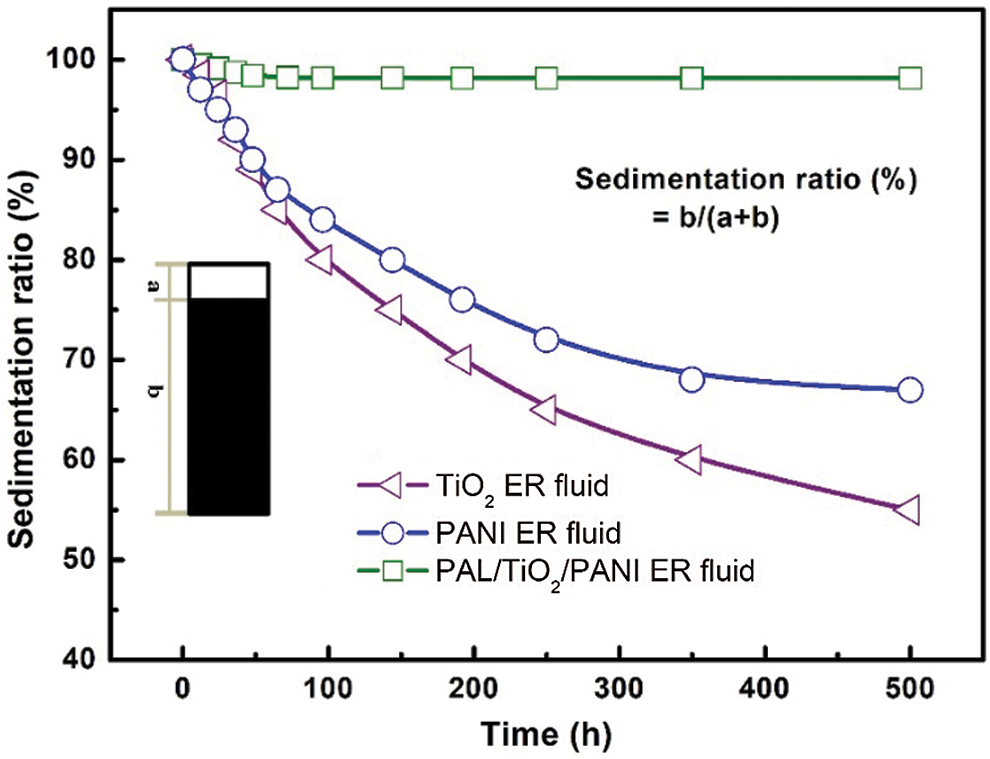