The vital importance of skeletal muscle for general health and in the performance of daily activities is well established. Skeletal muscle has several functions, including protection of vital organs, movement and meeting the metabolic demands of exercise [1]. Maintaining or even increasing skeletal muscle mass is important for many athletes and in many other conditions, including the elderly, and, diseases associated with muscle atrophy (such as cancer, AIDS, and diabetes) [2].

In recent years, great efforts have been made to clarify the cellular and molecular mechanisms of both muscle hypertrophy and atrophy. It is possible that identifying regulators or signals and understanding how they work will open up new avenues for the development of treatment for pathologies and exercise programs (training). Interleukin 6 (IL-6) signaling, along with stimulation of hypertrophic muscle growth and myogenesis, is one of the main pathways studied to date. IL-6 is a growth factor that is produced by skeletal muscle in response to muscle contraction [3]. IL-6 signaling is activated by connecting IL-6 to its receptor complex, glycoprotein 130 (Gp130), together with the Janus kinase signal converter and transcription activation pathway (JAK/ STAT) [4]. Glycoprotein 130 (Gp130) is a central signal converter of cytokines associated with interleukin 6 (IL-6), which is expressed in mammalian organisms. Activation of Gp130 by cytokines such as IL-6 occurs in response to inflammation, overload, and cell damage, especially through the signal exchange pathway (JAK) signal Janus kinase and transcription activator (STAT) [4,5]. In addition, IL-6 may modulate protein synthesis through JAK/STAT waterfalls. JAK/STAT activation is essential for cell growth, regulation and phenotypic compatibility [5]. It has also been shown that the IL-6/STAT1/STAT3 signaling pathway plays an important role in regulating satellite cells and muscle hypertrophy in response to resistance training in rodents [6].

On the other hand, increasing demand for healthy foods has led to more attention being paid to natural resources [7]. Spirulina platensis (blue algae) is used as human food resource due to its high protein content and high nutritional value. This particular algae is rich in essential amino acids, minerals, vitamin B12 and essential fatty acids (e.g., gamma-linolenic acid), and antioxidant pigments such as carotenoids as well as other beneficial plant chemical compounds [7–9]. In addition, spirulina is a rich source of the pigment phycocyanin, which is a very powerful antioxidant and has the property of destroying free radicals (hydroxyl and proximal radicals) [10]. The effects of spirulina on IL6 concentration and activation have been demonstrated in various studies [11–13].

The authors declare that all supporting data are available within the article. All applicable international, national, and/or institutional guidelines for the care and use of animals were followed. All procedures performed in this study involving animals were in accordance with the ethical standards of the institution at which the studies were conducted [17]. The present study was approved by the ethics committee of the Medical University of Jahrom (IR.JUMS.REC.1398.011). Animals were maintained in an environment with a temperature of 22°C ± 2°C, and humidity 55% ± 4% under a 12/12 light/dark cycle. All animals were provided with free access to standard rat food (Pars Animal Feed Company, Tehran Iran; consisting of a total of 16.6 kJ g−1: carbohydrate 66.40%, fat 10.60% and protein 23%) and clean water, and were provided with human care following the relevant instructions.

In this study, 32 male Sprague–Dawley rats (weight: 290 ± 20 g), and 9 weeks of age were obtained from the Animal Center house of Shiraz University of Medical Sciences and then transferred to the laboratory in polycarbonate cages in the University of Marvdasht. In order to control food and supplements, each rat was kept in a separate cage. For accurate comparison of study data, animals were randomly divided into four groups (each group, 8 rats):

(A) Control (CO: without resistance training, without supplementation with spirulina)

(B) Supplementation with spirulina (SP: without resistance training)

After one week of maintenance in the laboratory (normal conditions), the animals were trained to climb a vertical ladder as the exercise for this study. The climbing familiarization sessions were conducted three to four times every day for a week without weights attached [17,18].

The resistance training protocol included an eight-week climb of a vertical ladder with a height of one meter, with the distance between the steps being four centimeters. Before the start of the exercise program, the rat went up the ladder for three repetitions without lifting any additional weight and without rest between the repetitions to warm up. For 8 weeks, the training groups underwent 5 exercise sessions w−1 of climbing the ladder with attached weights weighing 30–100% of body mass. The weight selected at the start of training was 30% of the mice’s body weight and increased to 100% of their weight in the last week (10% added to the previous load each week). The resistance training consisted of 3 sets of 5 repetitions with 1-min rest between each repetition and 2 min of rest between sets [17,18].

Each day, Spirulina platensis was added to the drinking water of rats in the SP and RE + SP groups at a dose of 200 mg kg−1 d−1 (Each rat was individually caged and the amount of water which contained the supplement; was measure daily) [17,18].

The animals from the four groups were sacrificed 24 h after the last training session [17,18]. Rats were anesthetized for 5 min by injecting with Ketamine 10% (50 mg kg−1 body mass) and xylosin 2% (10 mg kg−1 body mass) to measure the parameters [17,18]. Then quadriceps muscle was removed. Excised muscle was placed immediately in liquid nitrogen and later transferred to an 80°C freezer for extraction of RNA (Ribonucleic Acid).

Real-time PCR for expression analysis of the primer pairs for IL-6, GP130, JAK-STAT, and β2M were designed, as shown in Table 1. The β2M housekeeping gene was also used as the internal control for the real-time PCR reactions. The real-time PCR conditions were set for 10 min at 94°C followed by 40 cycles of 15 s at 94°C, 60 s at 60°C and extension steps. After each real-time PCR run, gel electrophoresis and melting curve analysis were carried out to confirm the specific amplification of target sequences. The amplification signals of different samples were normalized to β2M Ct (cycle threshold), and then the delta-delta CT (2−ΔΔCT) method was applied for comparing mRNA levels of test vs. control which represented as fold change in data analysis. 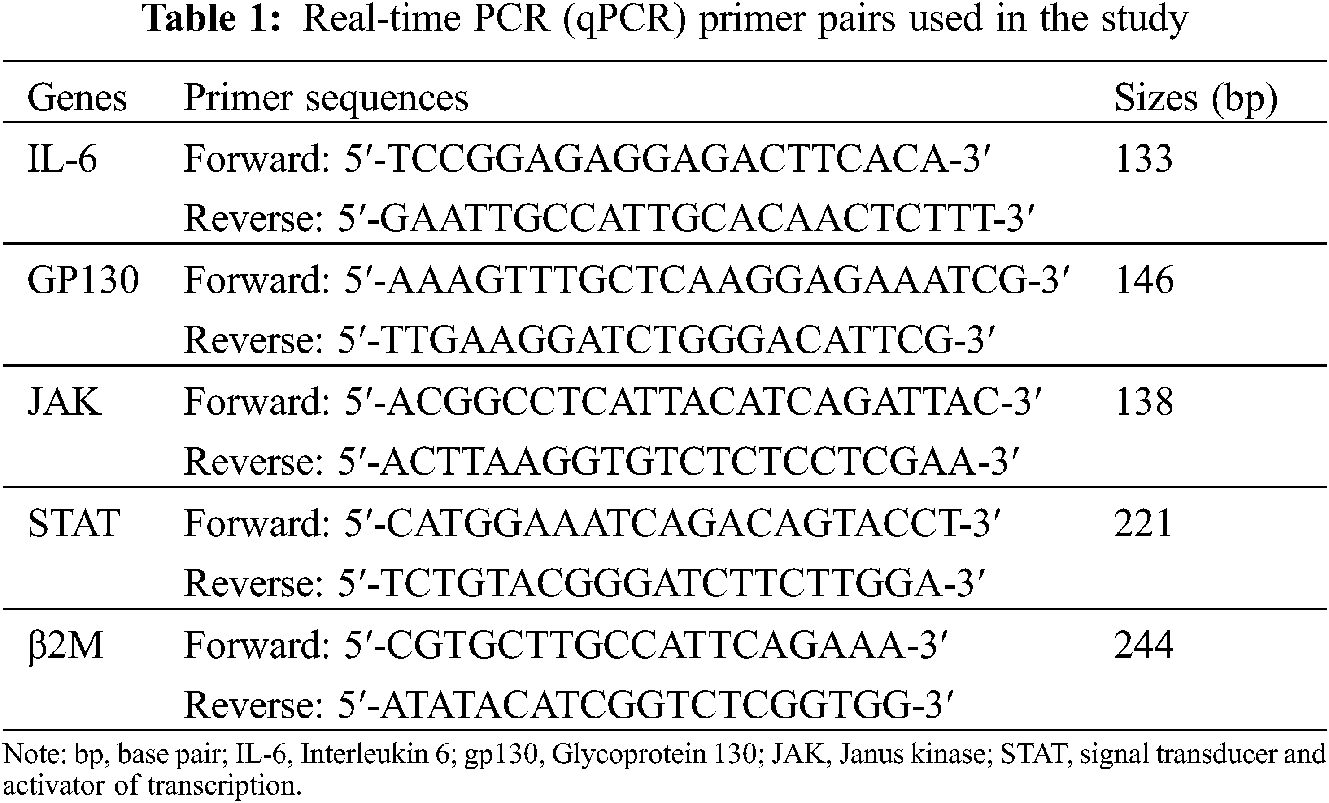 One-way ANOVA was used for comparing the effect of resistance training and supplementation with spirulina and their combination on signaling pathway. Analysis of data was performed using SPSS (version 18) and applied to measures of central tendency and dispersion. Statistical significance was considered when p value was less than 0.05. The software used was Graph Pad Prism 6. 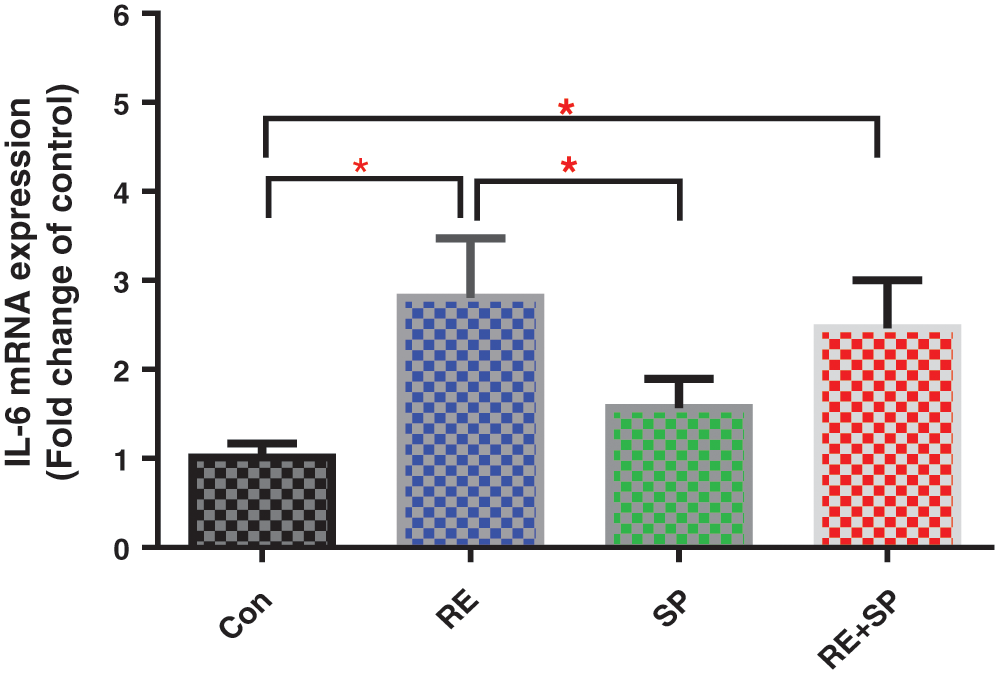 Figure 1: Level of Il-6 expression in the muscle tissue of rat in 4 group of research. The effects of SP, RE and SP + RE on the expression of Il-6 in muscle tissue. CO: Control, SP: Spirulina platensis, RE: Resistance Exercise, SP + RE: Spirulina platensis + Resistance Exercise. Data are presented as the mean ± standard error of the mean. *P-value less than 0.05 considered as significant 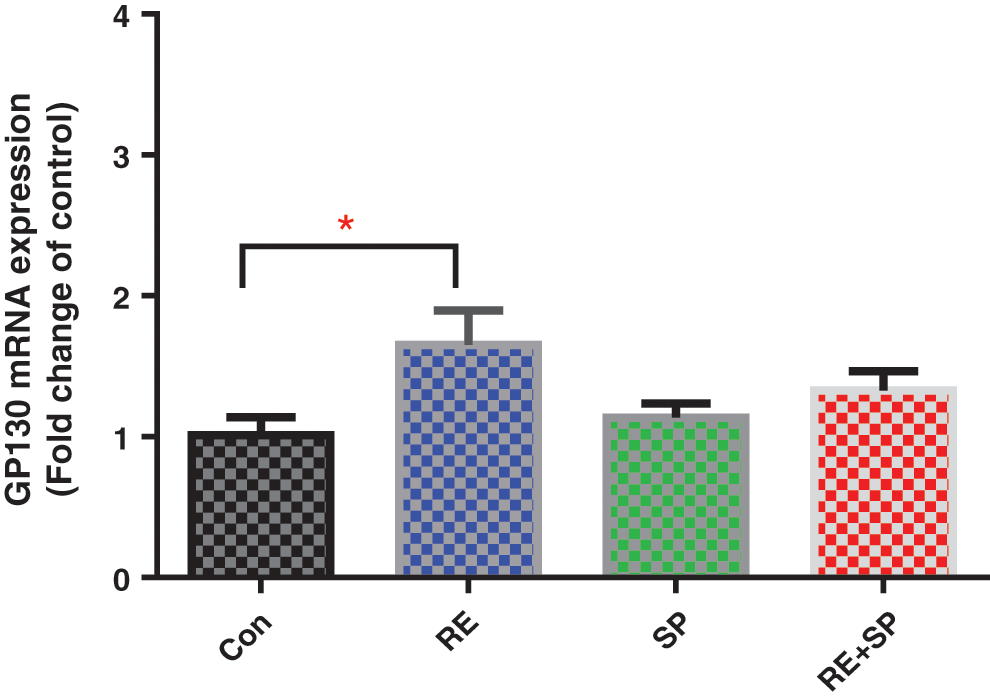 Figure 2: Level of Gp130 expression in the muscle tissue of rat in 4 group of research. The effects of SP, RE and SP + RE on the expression of Gp130 in muscle tissue. CO: Control, SP: Spirulina platensis, RE: Resistance Exercise, SP + RE: Spirulina platensis + Resistance Exercise. Data are presented as the mean ± standard error of the mean. *P-value less than 0.05 considered as significant 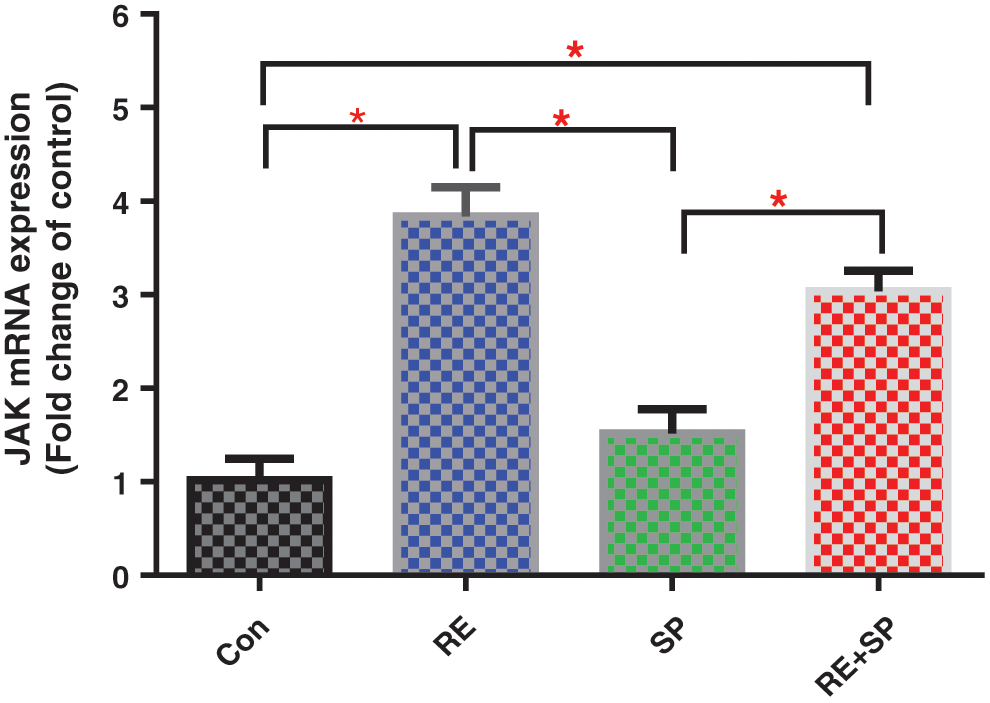 Figure 3: Level of JAK expression in the muscle tissue of rat in 4 group of research. The effects of SP, RE and SP + RE on the expression of Jak in muscle tissue. CO: Control, SP: Spirulina platensis, RE: Resistance Exercise, SP + RE: Spirulina platensis + Resistance Exercise. Data are presented as the mean ± standard error of the mean. *P-value less than 0.05 considered as significant 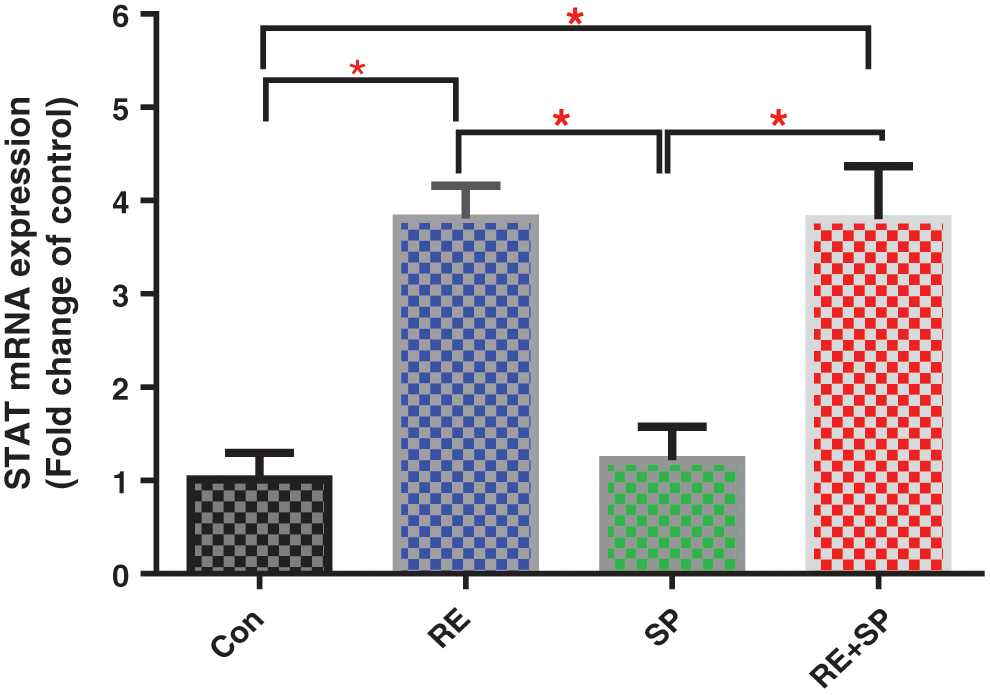 Figure 4: Level of STAT expression in the muscle tissue of rat in 4 group of research. The effects of SP, RE and SP + RE on the expression of STAT in muscle tissue. CO: Control, SP: Spirulina platensis, RE: Resistance Exercise, SP + RE: Spirulina platensis + Resistance Exercise. Data are presented as the mean ± standard error of the mean. *P-value less than 0.05 considered as significant

The data showed that the levels of interleukin IL-6, Gp130 and JAK-STAT in RE and RE + SP were significantly higher after the intervention period compared to CO. Also, the amount of Gp130 in RE and RE + SP increased significantly compared with CO. Growth factors and cytokines are the main mediators of skeletal muscle repair and adaptation. Although the exact signaling pathways involved have not yet been fully elucidated, it has been shown that the JAK/STAT signaling waterfall acts on human skeletal muscle as a possible mediator of exercise-induced adaptation [19]. Given the number of cytokines and growth factors that may regulate IL-6/Gp130/JAK/STAT signaling in human skeletal muscle, it is difficult to identify the specific signaling waterfall mechanisms in response to exercise.

IL-6 signaling is performed via its receptor complex, glycoprotein 130 (Gp130), and activation of the JAK/STAT signaling pathway. Increased activation of the IL-6/Gp130/JAK/STAT signaling pathway following exercise has been reported in animal [14] and human studies [6,19,20], which is consistent with the results of the present study. Because IL-6 mRNA is regulated by muscle contraction, the rate of expression of this gene increases with exercise. However, some factors that stimulate IL-6 release after exercise include: changes in calcium homeostasis, low muscle glycogen levels, and increased production of reactive oxygen species [20,21].

Exercise type, duration, and intensity are the most important factors for activating cytokines post-exercise [22]. Also, the type and intensity of exercise may produce different signaling responses from JAK/STAT proteins and their activating ligands. Upper STAT, IL-6 and GH pathways increase immediately after exercise and facilitate muscle hypertrophy. JAK and STAT phosphorylation occur in response to aerobic exercise and to acute, rapid, and brief resistance exercise [19]. Trenerry et al. [19] stated that Jak-STAT signaling does not appear to be affected by resistance training, so that the increase in key molecules is maintained after resistance training, which indicates the importance of effective recovery for repair and adaptation in skeletal muscle. Contrary to the findings of the present study, in the study of Pattamaprapanont et al. [23] no change in IL-6, STAT3 was observed in the mouse muscle after endurance training. The difference in the results of the present study with the above findings may be attributed to the animal, the type, intensity, and duration of exercise.

Spirulina platensis is a rich source of essential amino acids and antioxidants such as carotenoids and it also has the property of destroying free radicals (hydroxyl and proxyl radicals) [8,10]. Therefore, activation of the IL-6, Gp130 and JAK-STAT signaling pathway in the present study may be due to the effects of resistance training and spirulina supplementation in skeletal muscle.

The results of the present study showed that IL-6 increased, RE and RE + SP, with increased IL-6 may have promoted activation of the JAK/STAT signaling pathway.

The mechanism of activation of this pathway may be: IL-6, synthesized in response to RE + SP binds to the IL-6Rα/Gp130Rβ hemodialysis receptor and leads to a signaling cascade initiated by phosphorylation and JAK activation. This is followed by the induction of SH2, which contains the tyrosine-protein phosphate SHP2, leading to the activation of the Ras-ERK1/2 signaling waterfall [24].

Exercise type, duration, and intensity are the most important factors for activating cytokines after exercise [22]. Also, the type and intensity of exercise may produce different signaling responses from JAK/STAT proteins and their activating ligands. Upper STAT, IL-6 and GH pathways increase immediately after exercise and facilitate muscle hypertrophy. JAK and STAT phosphorylation occur in response to aerobic exercise and to acute, rapid, and brief resistance exercise [19].