Abstract: Myopia is a common ophthalmic deficiency. The structure and function of choroid layer is assumed to be associated with myopia. In this study, a laboratory developed spectral domain optical coherence tomography scanning system is used to image human eyes. The axial resolution of the system is about 7 μm, and the acquisition rate is 100 kHz. Firstly, a cross-sectional image was acquired by averaging 100 images from imaging posterior segment of each eye. The choroid thickness was measured by 11 discrete points. The average thickness of normal human eyes was (0.296 ± 0.126) mm, whereas the average choroid thickness of myopic eyes was (0.220 ± 0.095) mm. Afterwards, the T test is used to calculate the data statistically. The analysis of the final result is based on the average thickness measured and the thickness of each measuring point. There was a significant difference in choroid thickness between myopia and normal eyes (P value < 0.01), which indicates that the choroid thickness of myopia was significantly thinner than that of normal eyes. Besides, there are findings that the choroidal thickness in nasal side is thinner than that in the fovea and temporal side in each eye. The choroidal thickness on temporal side in myopia eye has the most significant difference comparing with that in normal eye. The comprehensive evaluation of myopia and normal choroidal thickness using spectral domain optical coherence tomography may provide an important reference for the development of medical methods for diagnosis and treatment of myopia.

Myopia is a common ophthalmic deficiency/disease. Nowadays, as electronic equipment is more widely used, and heavy learning task of young people and other social phenomena, myopia has become a serious problem influencing the vision qualify and eye healthy.

Choroid layer is located between the retina and sclera of the human eye, which provides oxygen and nutrition for the human eye [1]. There is a large number of capillaries are distributed in the choroid. If the capillary space of choroid is too large or the vasculature flow is insufficient, it is related to macular disease or some other diseases of human eyes. Choroid thickness, as an intuitive parameter, may have a certain correlation with myopia [2,3].

Optical coherence tomography (OCT) has been developed since 1991 [4]. From time domain to spectral domain and swept source OCT, the imaging speed, imaging resolution and signal-to-noise ratio of the system have been greatly improved. The spectral domain OCT (SD-OCT) use spectrometer to collect the coherent light information, and analyze the signals in spectral domain, which make the acquisition speed in the depth direction is much faster than that of the time domain OCT [5]. With the development of this technology, and because of the superior imaging resolution of OCT and the need of ophthalmic examination, it has been widely used in the ophthalmic examination [6,7]. SD-OCT is a noninvasive optical imaging method, which can further analyze and determine the pathogenesis of myopia by analyzing the relationship between choroid and myopia in different age groups, so that in the adolescent stage, the development of corresponding medical methods can further intervene the incidence of myopia in and children and adolescents.

Unlike other traditional imaging methods, OCT uses a low coherent light source to illuminate the imaging sample, and then obtain the depth information of the sample by the interference signal extracted from the reflected light from the sample arm and reference arm. The detected signal from the system can be expressed by the following formula (1) [8]:

In the formula (1), is the signal collected from SD-OCT, is the photoelectric conversion efficiency of the camera. is the power spectrum function of the light source. is the reflectivity of the reference arm. is the reflectivity of the sample arm. is the distance between the reference arm and the spectroscopic position. is the distance between the sample and the spectroscopic position. is the wave vector. The first term in the above formula is the DC term, which is the superposition of the reflected light intensity from the reference arm and the sample arm. The second item is the interrelated item between the returned light of the reference arm and each layer of the sample. The third term is the self-coherent term, which is the interrelated item caused by the interference between different layers’ reflections of the sample arm. The imaging of OCT is mainly based on the second term, that is, the interrelated item. As shown in the above formula, with the deepening of the depth, the frequency of the signal is higher. After removing the DC term and self-coherent noise of the collected signal, the intensity information of different depths can be obtained by Fourier transform.

Figure 1: (a) Signal of A-line and (b) B-scans composition

The signal of a single A-line is shown in Fig. 1. Different depth positions are denoted by the abscissa, while the signal intensity of different depths of tissue is shown by the ordinate. The complete two-dimensional choroid map, shown by the OCT B-scans, can be obtained, where the choroidal thickness can be measured. The thickness of choroid is calculated from the distance between the RPE and the choroidal border. The choroidal thicknesses from multiple locations of the thickness band could be evaluated.

Here, a SD-OCT system is used to image the fundus. The schematic and photograph of the imaging system are shown in Fig. 2. 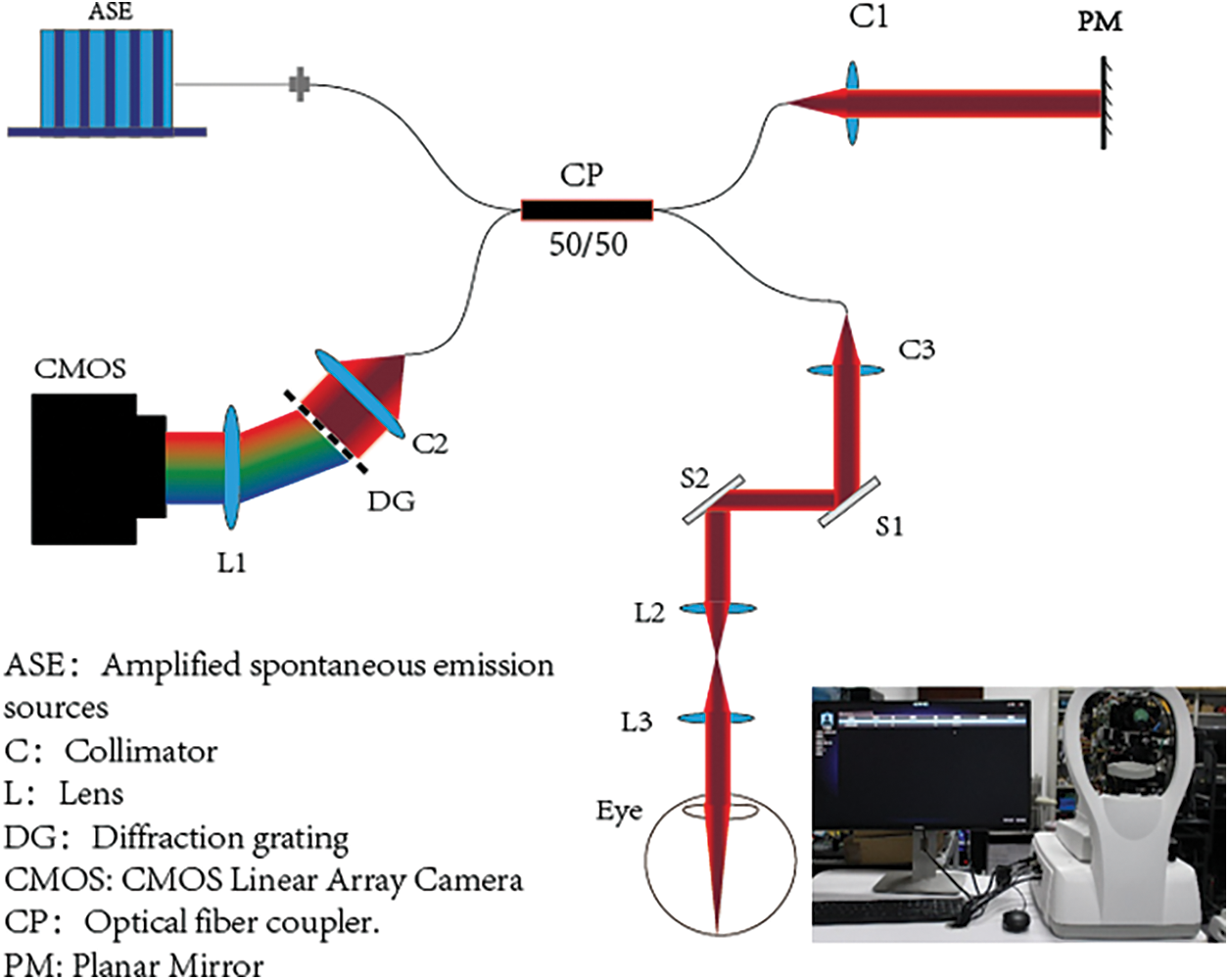 Figure 2: The structure diagram of the SD-OCT System

The initial light of the system is originated from an ASE light source (EXALOS), with a central wavelength of 840 nm and a bandwidth of 49 nm (−3 db), which is divided into two beams through an optical fiber coupler (50:50 coupling ratio, Thorlabs). One beam of the light enters the reference arm through the collimator (Thorlabs); the other beam of the light enters the sample arm through the optical fiber collimator, and then controls the tomography imaging position of the system through an X-Y scanning galvo mirror systems (Thorlabs). Finally, it passes through the objective lens group composed of L2 and L3, and then focuses on the retina and choroid area through the optical system of the eye. The reflected light from the reference arm and the backscattered light from the sample arm go into the imaging acquisition section after being coupled into the optical fiber couplers. The returned light passes through a collimated lens (focal length is 75 mm) and then hits on the grating (1800 L/mm, Wasatch). Then, through a focusing lens (focal length is 150 mm), the signal is collected on the photosensitive layer of the camera (E2V). The fastest imaging speed of the camera is 140 K. The imaging speed of the system is 100 kHz. The axial resolution of the system is about 7 μm. The measurement sample of this experiment is human eye fundus. Setting the average refractive index of its tissue to be 1.375. The power of the irradiated light at the pupil is about 2 mW, which meets the requirements of GB7247 and ISO-15004.

There were 10 volunteers in this experiment. The purpose and significance of the study have been informed to the subjects with agreements. In the 10 subjects, four of them have normal eyes and were used as control group A. Six of them have myopic eyes, which were used as experimental group B. Through imaging 20 eyes of the 10 subjects at the same specified period on different dates, clear choroid fundus images were obtained, and an average of 11 points of choroid were measured. Finally, the data sets were analyzed and compared. 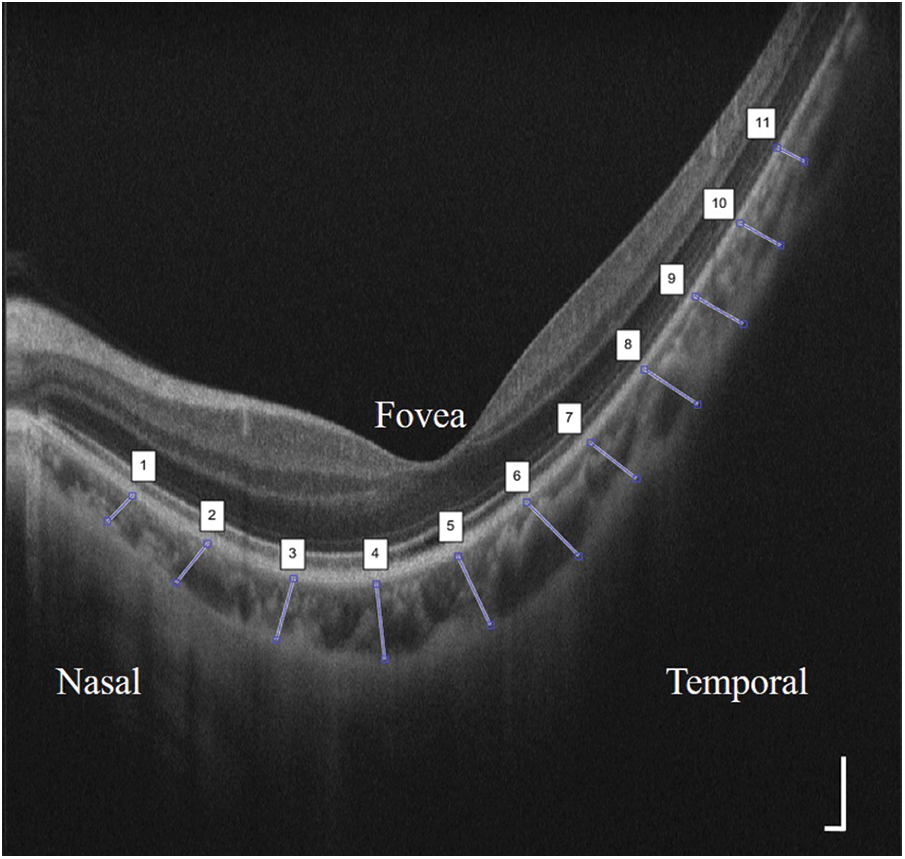 The collected data, incorporating average value, positive and negative deviation, were analyzed by SISS 25 software. The t test was implemented to the measured data independently, and P < 0.05 difference denotes statistically significant. The results were shown in Table 1 & Fig. 4. According to Table 1, the thickest region of choroid was in the temporal side, followed by the central fovea thickness. The nasal side was the thinnest, which was consistent with the previous study [9]. As shown in Table 1, the average measurement result of the choroid thickness in normal human eyes was 0.296 (±0.126) mm. The average choroid thickness of myopic eyes was (0.220 ± 0.095) mm. The T value of T test was 20.262, P < 0.01, that is to say, the choroid thickness of myopia group was significantly different from that of normal human eyes. Moreover, there were significant differences at each measuring point, which indicated that the choroid thickness of myopic eyes became thinner than that of normal eyes. The choroidal thickness on temporal side in myopia eye has the most significant difference comparing with that in normal eye. 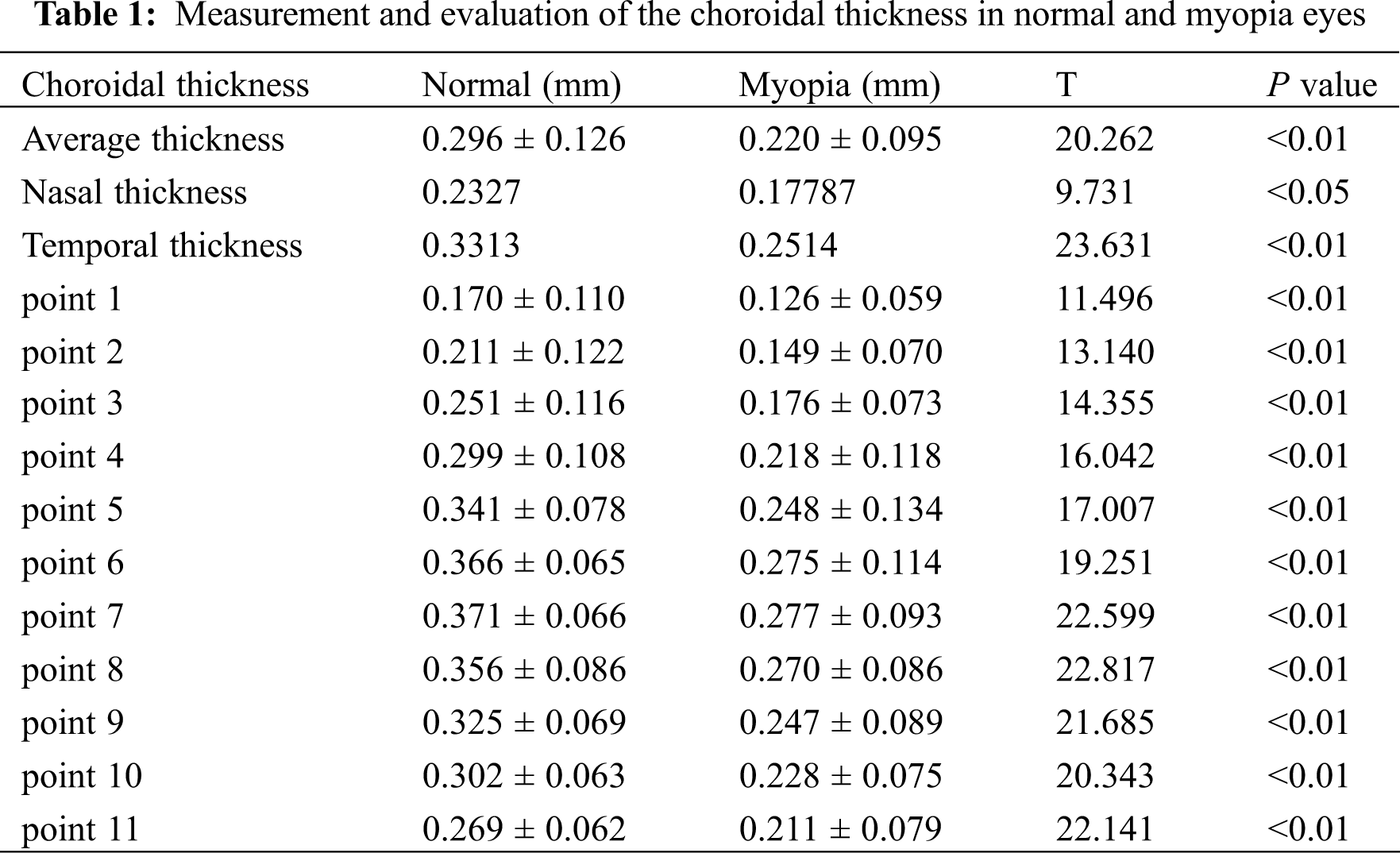 Overall, a comprehensive evaluation of myopia and normal choroidal thickness using spectral domain optical coherence tomography is reported here. The choroid thickness of myopia was significantly thinner than that of normal eyes (P value < 0.01). The choroidal thickness on temporal side in myopia eye has the most significant difference by comparing with that in normal eye. Besides, the choroid thickness values in temporal, fovea and nasal areas become thinner gradually. The study may provide an important reference for the development of therapeutic strategies for myopia.

Acknowledgement: We thank the support from the research lab in Guangdong Weiren Meditech Co., Ltd. and Foshan University.