As a ball game with strong confrontation, basketball has comprehensive requirements on the strength, speed, endurance and skills of the players [1]. With the development of modern basketball, confrontation techniques between players also show diversified development, and the rhythm between the offensive and defensive sides is changing faster and faster. In the process of more and more intense confrontation, the good physical quality of athletes can better achieve the confrontation advantage [2]. Good physical quality not only refers to more durable endurance and more powerful explosive power, but also includes the body’s coordinated balance ability. In the course of basketball confrontation, there will be a variety of different movement skills and conflicts between the body; in this process, the player’s body center of gravity and the distribution of body strength will change rapidly, and once these changes are out of range, they will greatly affect the stability of the player and eventually lead to failure of the confrontation or a decrease in the hit rate of the shot [3]. Athletes’ coordinated balance can greatly affect their endurance and explosive power when performing basketball confrontation. Park et al. [4] explored differences of maximum muscle strength and isokinetic knee and core muscle functions according to pedal power of racing cyclist candidate. They found that athletes with greater peak and average muscle power had significantly lower body fat and significantly higher free fat. Taveira et al. [5] compared trunk muscle strength and postural control of older running athletes vs. older physically active adults. They found that older adults who performed running exercise had higher isokinetic torque of extensor trunk muscles and better postural control than those who performed regular physical activity. The main purpose of this study is to provide a reference for the training of basketball players through analyzing the effectiveness of core strength training. This paper briefly introduces the coordinated balance and core strength of basketball players. Twenty basketball varsity members from Chengdu College of University of Electronic Science and Technology of China were selected as subjects for the test. The novelty of this paper is applying core strength training to strengthen the coordination and balance of athletes and verifying the effectiveness of core strength training on muscle strength and coordination and balance enhancement using a controlled approach.

Muscle tissue directly coordinates body movements [6]. In the entire closed-loop of motor coordination, each part of the process, from sensory incoordination to transmission of nerve impulses to the movement of muscle tissue, takes a certain amount of time [7]. If the time is shortened, the athlete can more quickly achieve a coordinated balance of the body during the confrontation and thus gain an advantage in the confrontation [8]. The strength of muscle tissue, as the structure that directly coordinates and balances the movement, is crucial, and sufficient muscle strength allows for faster adjustments to the movement.

The main role of the core region of the human body is the transmission of upper and lower limb forces, the maintenance of human stability and the control of the body’s center of gravity, while core strength is the strength quality of the core region to achieve the above role [9].

Targeted training of the core region can effectively maintain the stability of the spine and pelvis, guarantee the balance of the center of gravity, and better achieve the coordinated balance of the upper and lower limbs [10].

Core strength training is targeted to muscle groups in the core region. The regulation of muscle groups by the nervous system is promoted through the unstable environment created during training to maintain correct body posture, and the sensory perception of inconsistencies is enhanced to exercise the control of core muscles, thus improving the body’s coordinated balance [11]. Basketball players face fierce confrontation in the actual game and need to complete various technical movements in the rhythmical and variable confrontation [12]. If athletes want to accomplish reasonable technical movements in the confrontation, they need to maintain their balance of the center of gravity as much as possible. Core strength training can strengthen the athletes’ coordination ability, keep themselves stable during the confrontation, reduce the influence on technical movements, and improve the shooting percentage [13].

In this paper, basketball varsity members from Chengdu College of University of Electronic Science and Technology of China were selected as subjects for the test. They were male athletes with an average age of 20 ± 1 years and an average height of 175 ± 2 cm. All 20 members had received training for three years and had no history of injury, as well as no physical injuries in the last three months.

Both the control and experimental groups underwent isometric muscle strength test, balance test, and shooting percentage prior to training and again after a six-week training period.

The content of the balance ability test [16] is as follows. The subject stood in the center of the balance tester as required by the dynamic and static balance test procedure and maintained a stable balance. After starting the balance tester and related test procedures, the room was kept quiet. The subjects performed balance movements with both feet, left foot and right foot in two states (static with eyes open and dynamic with eyes open). The subjects did the balance movement test in such a way that the torso was not disturbed by the outside world, and each movement lasted for 20 s and repeated five times. Judgment indicators of dynamic and static balance ability were overall stability index (SI), anterior and posterior stability (APSI) and medial and lateral stability (MLSI).

The collected data were statistically processed using SPSS software [18] and Excel software. The numerical results were presented in the form of x ± d. T-test was carried out on the data in the same group before and after training and data in different groups. A P value smaller than 0.05 indicated a significant difference. 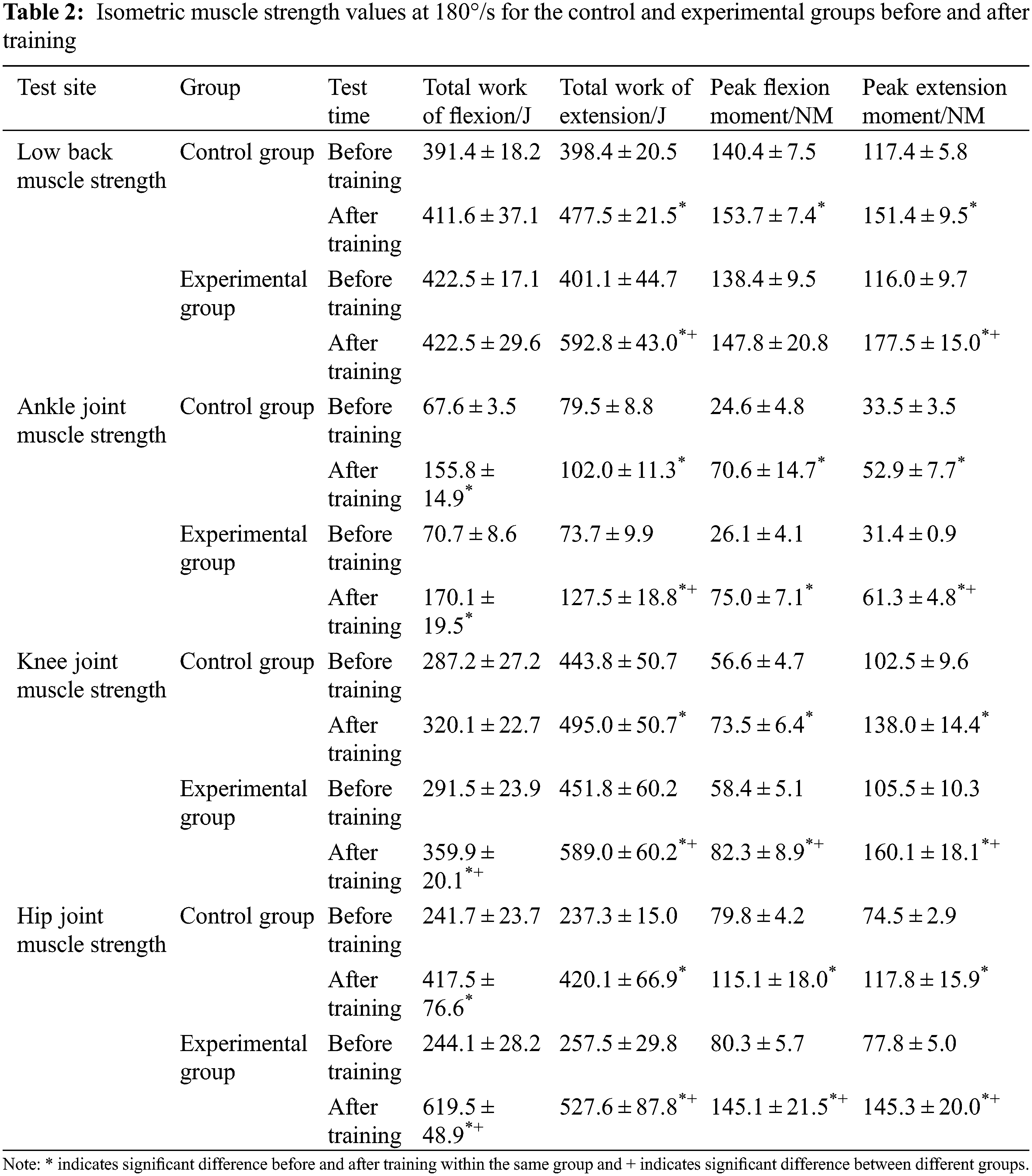 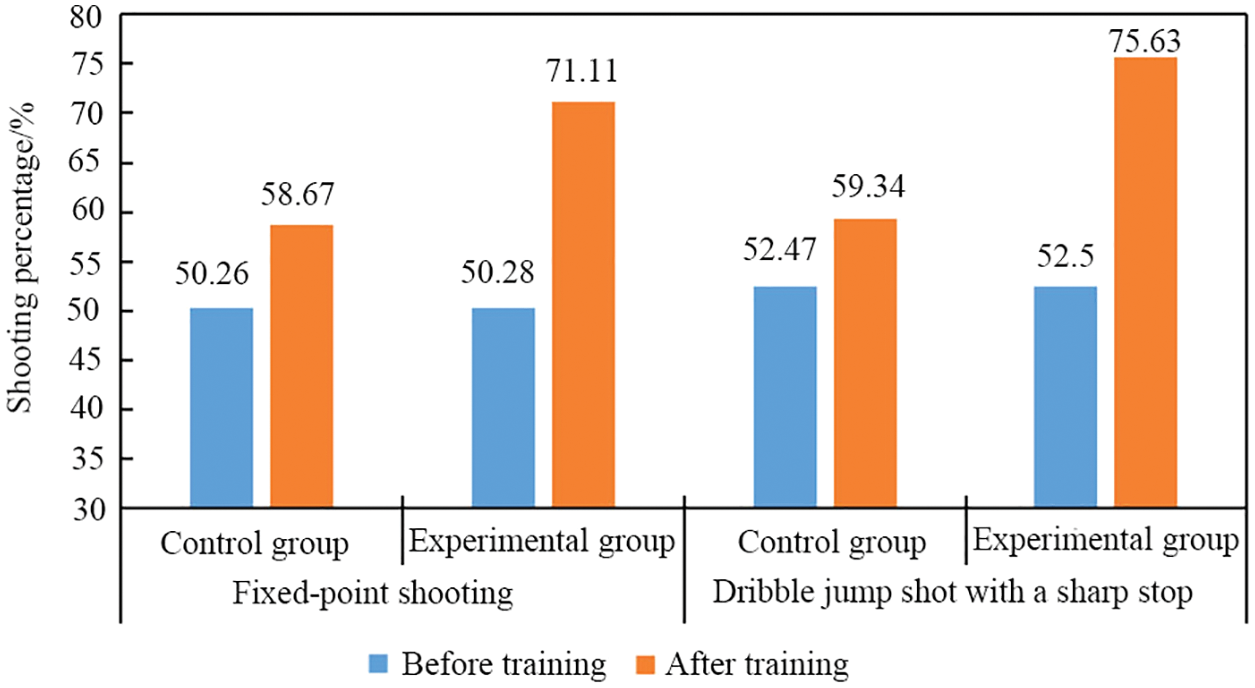 Figure 1: Shooting percentages of the control and experimental groups before and after training

Basketball is a ball game with strong confrontation, which requires high physical strength quality of athletes. Improving the strength quality of the athletes can improve the athletes’ advantage in basketball confrontation. Core strength training is a more targeted exercise than conventional strength training for the core region of the trunk consisting of the waist, pelvis and hip joints and their muscle groups, so it can improve the power transfer between the upper and lower extremities and the balance of trunk movement. In this paper, 20 male athletes from a university basketball team were randomly divided into a control group and an experimental group. The control group underwent six weeks of conventional strength training, and the experimental group underwent six weeks of core strength training. The isometric strength test, coordination and balance test, and shooting percentage test were carried out before and after training.

The results of the balance ability test showed that the athletes had better static balance after core strength training. The reason for the above result was that the static balance of the human body mainly relied on the vestibular receptors in the central system, and training movements formed effective stimulation to the vestibular receptors, which enhanced their sensitivity and effectively improved the static balance. In addition, core strength training had a more significant effect on the dynamic balance ability of athletes. The reason for the significant effect was because the vestibular sense, proprioceptive sense and central system’s ability to regulate muscles significantly affected dynamic balance ability, and the training movements not only enhanced the sensitivity of vestibular receptors but also exercised the skeletal muscles that maintain balance.

The results of the shooting percentage test demonstrated that the shooting percentage of athletes significantly improved in fix-point shooting and dribble jump shot with a sharp stop. The reason for the above result was because basketball players firstly hit the ground with lower limbs, then transmitted the power to the upper limbs through the core area of the torso, and finally threw the basketball to the basket through the pivoting of the fingers. This process required a coordinated effort from the core to control the stability of the entire body so that the force gained from hitting the ground could be transferred to the basketball intact. Core strength training focused on the core area of the body muscle groups, enhancing the maximum strength and external work capacity to make the control of the torso more effective and stable.

Conflicts of Interest: The author declares that they have no conflicts of interest to report regarding the present study.