Abstract: microRNA-422a (miR-422a) is downregulated in many hematopoietic tumors and solid tumors including hepatocellular carcinoma. We previously demonstrated that hepatitis B virus X protein (HBx) downregulated expression of miR-422a in HCC cell line HepG2 in vitro. However, we explore the mechanisms underlying this action. Forkhead box proteins (FOX) G1/Q1/E1 are known to negatively regulate miR-422a expression, and this prompted us to determine whether HBx suppresses miR-422a expression via activation of FOXG1/Q1/E1. The relationship between FOXG1/Q1/E1 and miR-422a in HepG2 cells stably expressing HBx was assessed with qRT-PCR. The correlation between HBx and FOXG1/Q1/E1 was determined with qRT-PCR and western blot in vitro. The cell cycle and CCK-8 assays were used to elucidate the consequence of miR-422a transfection in HepG2-hbx cells. FOXG1/Q1/E1 activated by HBx was found to be responsible, at least in part, for the downregulation of miR-422a in HepG2 cells. miR-422a transfection hampered the growth of HepG2-hbx cells by arresting cells in G1 phase. Both FOXG1/Q1/E1 and miR-422a may be suitable molecular targets for treatment of HBV-infected HCC.

miRNAs play important roles in the regulation of gene expression post-transcriptionally and are extensively involved in tumorigenesis [1]. Deregulation of miRNAs has been observed in multiple human diseases including hepatocarcinogenesis. miRNAs can be tumor suppressors or tumor promoters according to their expression and functions in specific tumors [2]. miR-422a downregulation can be observed in many hematopoietic tumors and solid tumors including hepatocellular carcinoma [3,4], leading to the activation of such oncogenes as MAPK1, PIK3CA, CD73, IGF1/IGF1R, and FOXG1/Q1/E1 [4–9].

miRNA dysregulation in tumors can be attributed to genomic variations, epigenetic modification, and chaos in biogenesis process. In addition to known regulators, miRNAs are also regulated by protein-coding genes, especially those encoding transcription factors (TFs). p53 promotes the maturation of miR-16-1, miR-143, and miR-145, which are tumor suppressors, in response to DNA damage [10]. c-Myc has been found to transcriptionally upregulate the onco-cluster of miR-17-92, while such tumor suppressors as let-7, miR-34a, and miR-16 were suppressed [11]. miR-422a silences the expression of FOXG1/Q1/E1, which is its own upstream regulator [4].

Because it is an onco-protein encoded by hepatitis B virus (HBV), hepatitis B virus X protein (HBx) is extensively involved in the initiation and progression of hepatocarcinogenesis [12]. HBx deregulates gene expression of hepatocytes by activating cell signaling pathways in cytoplasm and by binding TFs in nucleus, thereby contributing to malignant transition in hepatocytes [13]. Our team, for the first time, reported that HBx downregulated miR-16 family in HepG2 cells via activation of c-Myc, expanding its regulation of gene expression from protein-coding to non-coding genes [14]. Other teams have reported that the HBx transcript itself can directly mediate miR-15a/miR-16-1 repression in hepatocytes [15]. In addition to binding protein, HBx can also bind the DLEU2 lncRNA to activate gene expression in hepatocytes [16].

In a previous work, based on the pleiotropic functions of HBx, we explored their effects on the miRNA expression of hepatocytes. As in another report [17], miR-422a was downregulated by HBx in HepG2 cells in a microarray [14]. However, the mechanisms underlying the repression of miR-422a by HBx were not clearly established. In this research, we further confirmed that miR-422a was repressed by HBx transfection in HepG2 cells using qRT-PCR. As expected, FOXG1, Q1, and E1 were activated by HBx in vitro. Accordingly, si-FOXG1/Q1/E1 transfection hampered the HBx-induced miR-422a repression. Inversely, miR-422a transfection downregulated the expression of FOXG1/Q1/E1 in HepG2-hbx cells. Finally, miR-422a mimic transfection hampered the proliferation of HepG2-hbx cells by arresting cells in the G1 phase. In brief, we observed a preliminary HBx-FOXG1/Q1/E1-miR-422a pathway in HepG2-hbx cells. miR-422a may be an original molecular targeted agent suitable for treating HBV+ HCC via silencing FOXG1/Q1/E1.

FOXG1/Q1/E1-specific siRNAs, negative control (NC), miR-422a mimic, and miRNA NC were purchased from Genepharma, Shanghai, China. The sequences of siRNAs and primers for PCR are provided in Tab. S1.

The growth of cells was detected with CCK-8 kit; the distribution of DNA content was determined using a commercial kit (KGA511, KeyGEN BioTECH, Nanjing, China).

All data analysis was performed with SPSS 19.0, and p < 0.05 was set as significance level. The qRT-PCR results were analyzed using a Student’s t-test.

To clearly establish the mechanisms by which HBx downregulates miR-422a in HepG2 cells, we began by quoting a report that described a double-negative feedback loop between miR-422a and FOXG1/Q1/E1 in HCC [4]. We hypothesized that FOXG1, Q1, and E1 were activated by HBx and responsible for the miR-422a downregulation in HepG2 cells. As anticipated, qRT-PCR and western blot results confirmed the significant upregulation of FOXG1, Q1, and E1 in HepG2-hbx cells (Figs. 2A–2D). Moreover, the efficiency of si-FOXG1/Q1/E1 was also evaluated (Figs. 2A–2C). Collectively, our results, for the first time, showed that HBx could induce FOXG1/Q1/E1 activation in HepG2 cells in vitro. 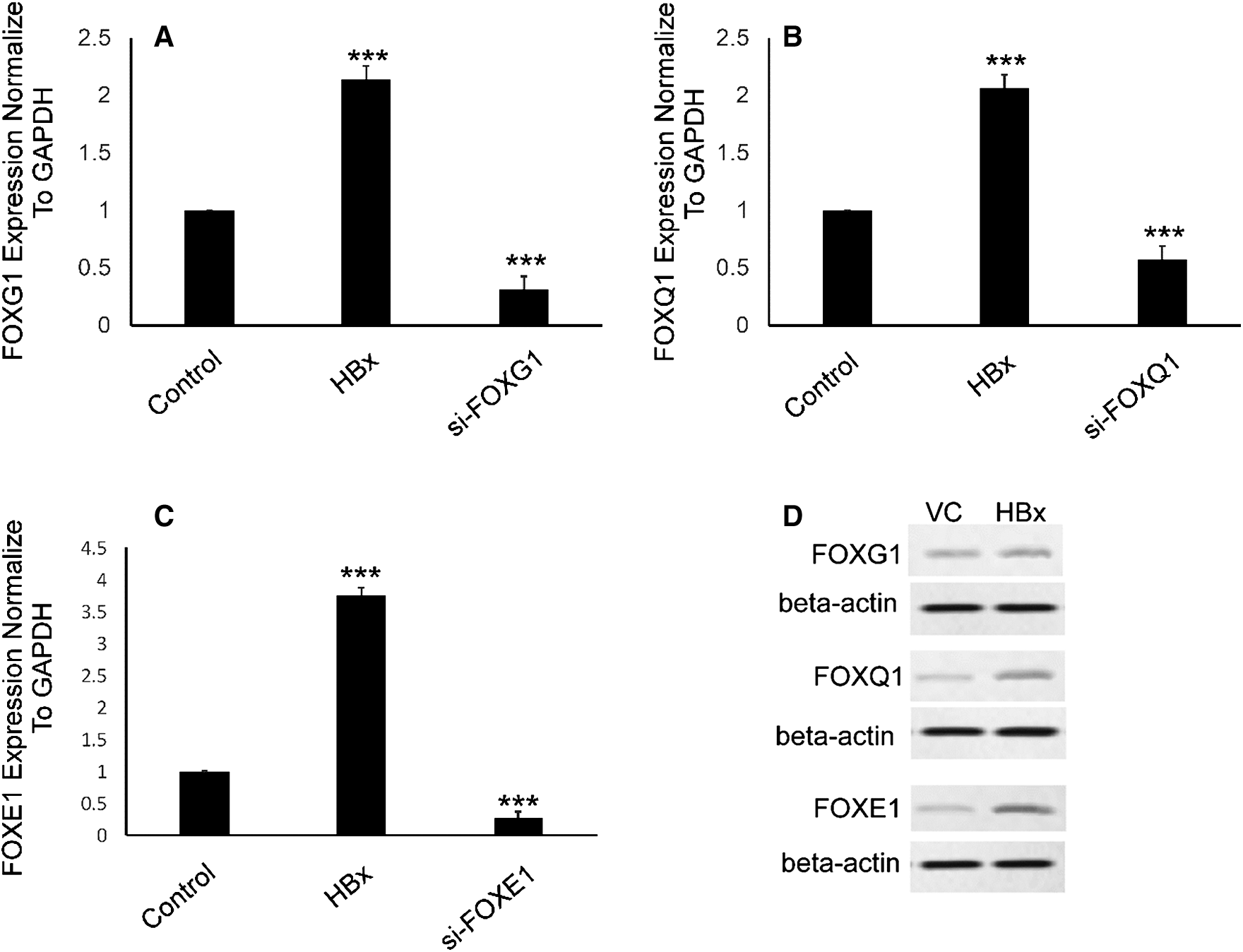 In a previous work, we showed the existence of an HBx-Lin28B-let-7 pathway in HepG2 cells [18]. We hypothesized that there was also an HBx-FOXG1/Q1/E1-miR-422a pathway in HepG2 cells. We confirmed that loss-of-FOXG1/Q1/E1 function using specific siRNAs significantly reactivated the expression of miR-422a in HepG2-hbx cells (Fig. 3D). Correspondingly, we verified that ectopically expressed miR-422a mimics could suppress the protein expression of FOXG1/Q1/E1 in HepG2-hbx cells (Figs. 3A–3C, three duplicates). In conclusion, we suggest that there may be not only a feed-forward HBx-FOXG1/Q1/E1-miR-422a pathway but also negative feedback between miR-422a and FOXG1/Q1/E1 (Fig. 4). 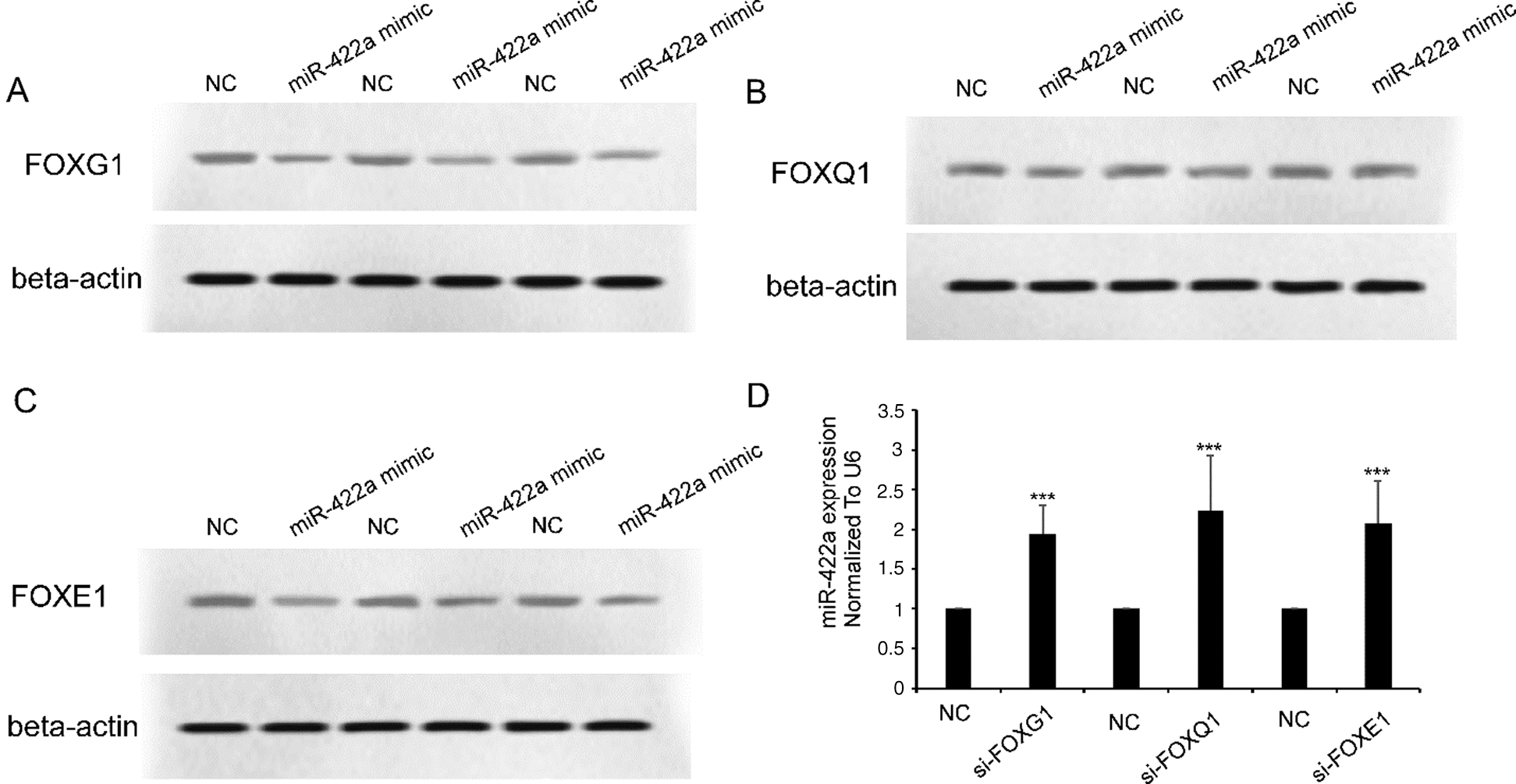 3.4 miR-422a Hampered the Proliferation of HepG2-hbx Cells by Arresting Cells in G1 Phase

HBx participates in the initiation and progression of HCC by deregulating coding genes of host hepatocytes. Increasing evidence confirmed that HBx can also regulate the non-coding genes including miRNA, lncRNA, and circRNA. We previously confirmed that HBx induced extensive miRNA downregulation in HepG2 cells including miR-422a with a microarray method [14], which contributed to carcinogenesis by re-activating multiple oncogenes including MAPK1, PIK3CA, CD73, IGF1/IGF1R, and FOXG1/Q1/E1 [4–9]. FOXG1/Q1/E1 can also transcriptionally suppress miR-422a expression in HCC [4]. miR-422a is also the target of long non-coding RNAs, such as OIP5-AS1, NT5E, DUXAP8, LINC00313, D63785 LINC01133, and LINC00858 [3,19–25]. However, the mechanisms underlying miR-422a repression by HBx in HepG2 cells were not clearly established [14,17]. We confirmed the miR-422a downregulation in HepG2-hbx cells with qRT-PCR and found a tentative HBx-FOXG1/Q1/E1-miR-422a pathway in HepG2 cells in vitro.

FOX proteins are a superfamily of evolutionarily conserved transcriptional regulators, a loss or gain of FOX function can alter cell fate and promote tumorigenesis as well as cancer progression [26]. Several key members of the FOXA, FOXC, FOXM, FOXO, and FOXP subfamilies are heavily implicated in cancer, driving initiation, maintenance, progression, and drug resistance [27]. FOXM1, FOXC1, and FOXG1/Q1/E1 are involved in the initiation and progression of HCC [4,28–32]. For the first time, we found that HBx transfection activated FOXG1, Q1, and E1 expression in HepG2-hbx cells. FOXG1/Q1/E1 and miR-422a antagonize each other, striking a balance under normal conditions. Imbalance between FOXG1/Q1/E1/miR-422a can promote hepatocarcinogenesis [4]. Recently, we also identified a similar mechanism that HBx downregulated let-7 via activation c-Myc-Lin28B pathway [18]. Our results again show the significance of the HBx-TFs-miRNA mechanism in transformation of HCC cells in vitro.

Our results elucidated the critical roles played by FOXG1/Q1/E1 in HBx-induced miR-422a downregulation. Targeting miR-422a/FOXG1/Q1/E1 loop might be a prospective treatment for HBV+ HCC patients.

Acknowledgement: We would like to thank Prof. Jie Wang for revising this manuscript.

Data Availability: The data are available upon special request to the corresponding authors.

Funding Statement: This work was supported by grants from the National Natural Science Foundation of China (81302161), the Key Program of Department of Science and Technology of Sichuan Province (2020YJ0450), and the Health and Family Planning Commission of Sichuan Province (150215).