Chrysanthemum (Dendranthema morifolium [Ramat.] Tzvel.) is a perennial flower that has been cultivated in China for more than 3,000 years due to its variable flower shape, noble meaning, and certain medicinal value. It is popular among consumers, and has significant economic and social benefits [1].

The field production of chrysanthemum is influenced by many factors. Among these, temperature is one of them. The optimum temperature for the growth and development of chrysanthemum is 15–25°C. Temperatures above 25°C are unfavorable for its growth, which basically stops at 40°C [2]. However, due to the trend of global warming in recent years, most parts of the China have experienced hot summers, and extremely high temperatures above 40°C. Hence, high temperature heat damage has become one of the important factors that affected chrysanthemum production [3]. Dendranthema grandiflorum ‘Jinba’ is a popular chrysanthemum variety in the market. This is a heat resistant chrysanthemum variety that can withstand a maximum temperatures of 32°C. Physiological studies have found that after a high temperature treatment, the change in electrical conductivity was small, and malondialdehyde (MDA) increased with the number of days of heat stress. Hence, it was concluded that Dendranthema grandiflorum ‘Jinba’ was the more heat resistant variety [4].

When plants are exposed to high temperatures, temperature changes stimulate a stress response, which in turn triggers changes in protein expression in plants. These changes induce the synthesis of proteins related to the plant heat resistance mechanism to improve plant heat resistance. However, protein and molecular level studies related to the heat resistance of Dendranthema grandiflorum ‘Jinba’ have not been conducted. Conducting these studies could help to clarify the mechanism of the high temperature stress in chrysanthemum.

The Dendranthema grandiflorum ‘Jinba’ used for the present study was planted in Sichuan Agricultural University. In the tissue culture room, routine maintenance was carried out according to the tissue culture conditions and specific needs. The plants were transplanted into 7 cm × 7 cm × 13 cm plastic pots, with one plant per pot, according to the conventional cultivation method. Basic seedlings underwent routine management.

Potted plants with good growth and ten-leaf age were selected and transferred to an artificial climate chamber set at either 25°C (control group) or 40°C (experimental group) for three days. All other treatment conditions were kept the same. The photoperiod was 16 h light and 8 h dark, with 70% relative humidity. At the end of the high-temperature treatment, the fourth and fifth leaves from the apical part of each plant were collected, mixed and sampled to ensure three biological replicates. Then, these were frozen in liquid nitrogen, and stored at −80°C in a refrigerator for later use.

The sample was grinded by liquid nitrogen into cell powder, and transferred to a 5 mL centrifuge tube. Afterwards, four volumes of lysis buffer (8 M of urea, 1% protease inhibitor) were added to the cell powder, followed by sonication for three times on ice using a high intensity ultrasonic processor (Scientz) (Note: For the post-translational modification [PTM] experiments, inhibitors were also added to the lysis buffer; that is, 3 μM of trichostatin A [TSA] and 50 mM of N-acetylmuramic acid [NAM] for acetylation). The remaining debris was removed by centrifugation at 12,000 g at 4°C for 10 min. Finally, the supernatant was collected, and the protein concentration was determined using a BCA kit, according to manufacturer’s instructions.

For digestion, the protein solution was reduced with 5 mM of dithiothreitol for 30 min at 56°C, and alkylated with 11 mM of iodoacetamide for 15 min at room temperature in darkness. Then, the protein sample was diluted by adding 100 mM of tetraethylammonium bromide (TEAB) to the urea concentration at less than 2 M. Finally, trypsin was added at a 1:50 trypsin-to-protein mass ratio for the first digestion overnight, and at a 1:100 trypsin-to-protein mass ratio for a second four-hour digestion.

The tryptic peptides were dissolved in 0.1% formic acid (solvent A), and directly loaded onto a home-made reversed-phase analytical column (15 cm in length, 75 μm id). Then, the gradient comprised of an increase from 6% to 23% solvent B (0.1% formic acid in 98% acetonitrile) over 26 min, an increase from 23% to 35% in eight minutes, and an increasing trend to 80% in three minutes. This was followed by holding at 80% for the last three minutes, and all were maintained at a constant flow rate of 400 nL/min on the EASY-nLC 1000 Ultra Performance Liquid Chromatography (UPLC) system.

The peptides were subjected to the NSI source, followed by tandem mass spectrometry (MS/MS) in Q Exactive TM Plus (Thermo) coupled online to the UPLC. The electrospray voltage applied was 2.0 kV. The m/z scan range was 350–1,800 for the full scan, and intact peptides were detected in the Orbitrap at a resolution of 70,000. Then, the peptides were selected for MS/MS using the Normalized Collisional Energy (NCE) set at 28, and the fragments were detected in the Orbitrap at a resolution of 17,500. The data-dependent procedure alternated between MS scans, followed by 20 MS/MS scans with 15.0 s of dynamic exclusion. Automatic gain control (AGC) was set at 5E4. The fixed first mass was set at 100 m/z.

The resulting MS/MS data were processed using the MaxQuant search engine (v.1.5.2.8). Tandem mass spectra were searched against the human uniprot database concatenated with the reverse decoy database. Trypsin/P was specified as the cleavage enzyme, allowing up to four missing cleavages. The mass tolerance for precursor ions was set at 20 ppm in the first search, and 5 ppm in the main search; the mass tolerance for fragment ions was set at 0.02 Da. The Carbamidomethyl on Cystine (Cys) was specified as fixed modification and acetylation modification and oxidation on Met were specified as variable modifications. False discovery rate (FDR) was adjusted to <1%, and the minimum score for modified peptides was set at >40.

2.7 Bioinformatics Analysis of the Identified Proteins

The relative quantification values for each sample were calculated based on the Label-free Quantification (LFQ) intensity of the protein between the different samples. Then, the P-value was calculated using the two-sample, two-tailed t-test method. Except for the P-value of <0.05, the A 1.5-fold change was set to identify the significantly differentially expressed proteins.

Non-labeled quantitative proteomics was applied to six samples (H1, H2, H3, CK1, CK2 and CK3) for mass spectrometry, and this identified 38,352 peptides (31,914 specific peptides) and 6,313 proteins. Among these, 4,513 were quantifiable (quantitative information available for at least one comparison group). Statistical analysis of the software revealed (Fig. 1) that there were 1,463 significant differential protein spots. Among these, 701 were upregulated and 762 were downregulated. 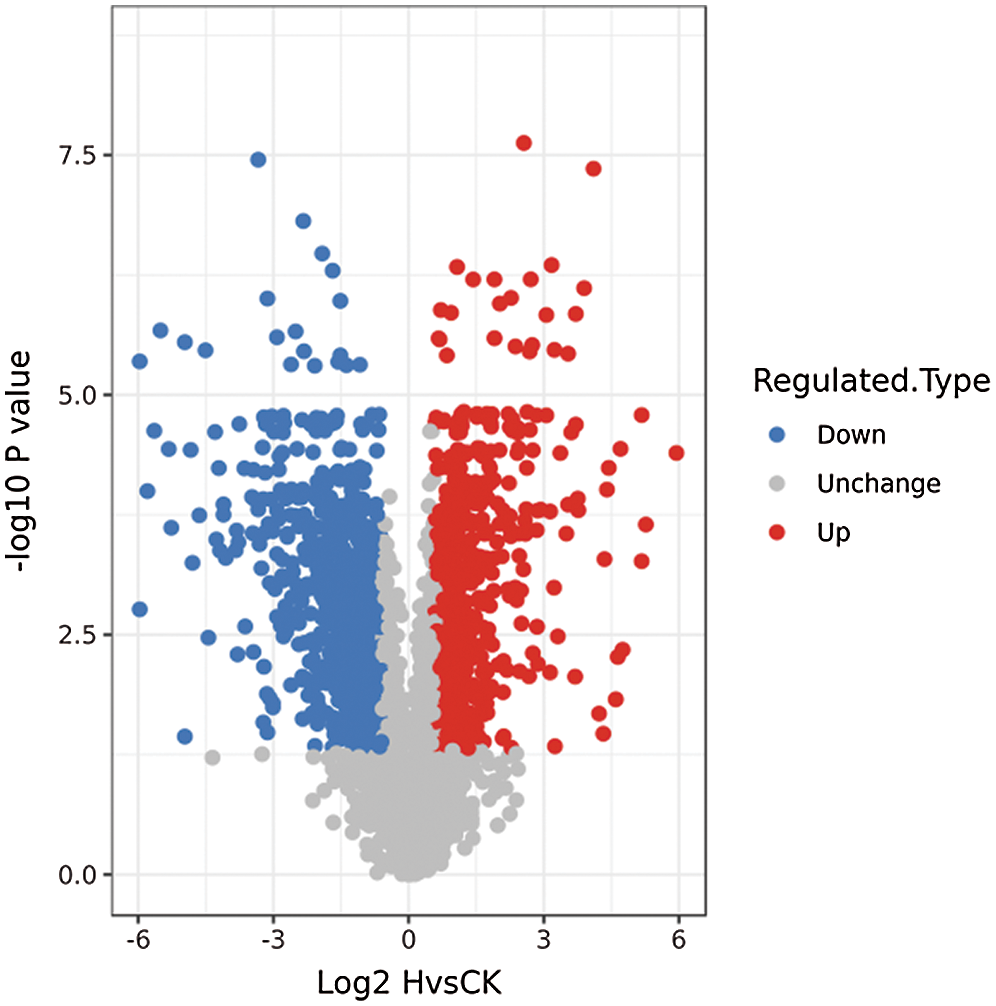 A total of 1,463 differential proteins were successfully identified and analyzed using the MaxQuant software. The identified proteins were divided into 22 groups, based on their putative functions, in order to further elucidate the mechanism of heat resistance on chrysanthemum leaves. 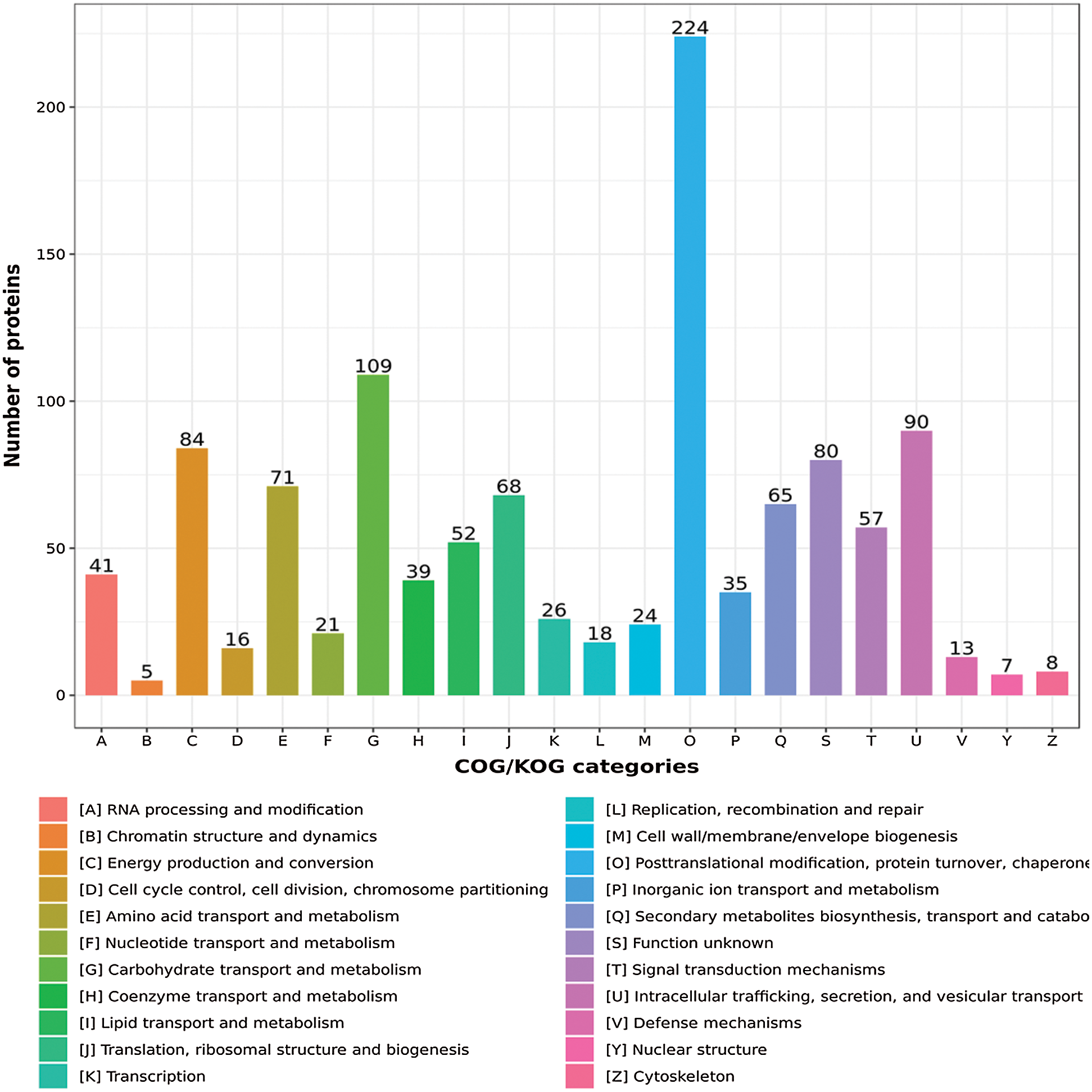 Figure 2: COG/KOG categorie. The horizontal axis is the letter number of the COG classification, and the correspondence between letters and classification is fixed

We investigated and screened the top 50 most closely interacting proteins, and used the to map the protein interaction network (Fig. 3). This was to gain a comprehensive understanding of the differentially expressed proteins affected by heat stress, and clearly demonstrate the protein-protein interactions. The size of the circles represents the number of differential proteins and their interacting proteins. The larger the circle, the more proteins it interacted with, and the more important the protein was in the network. 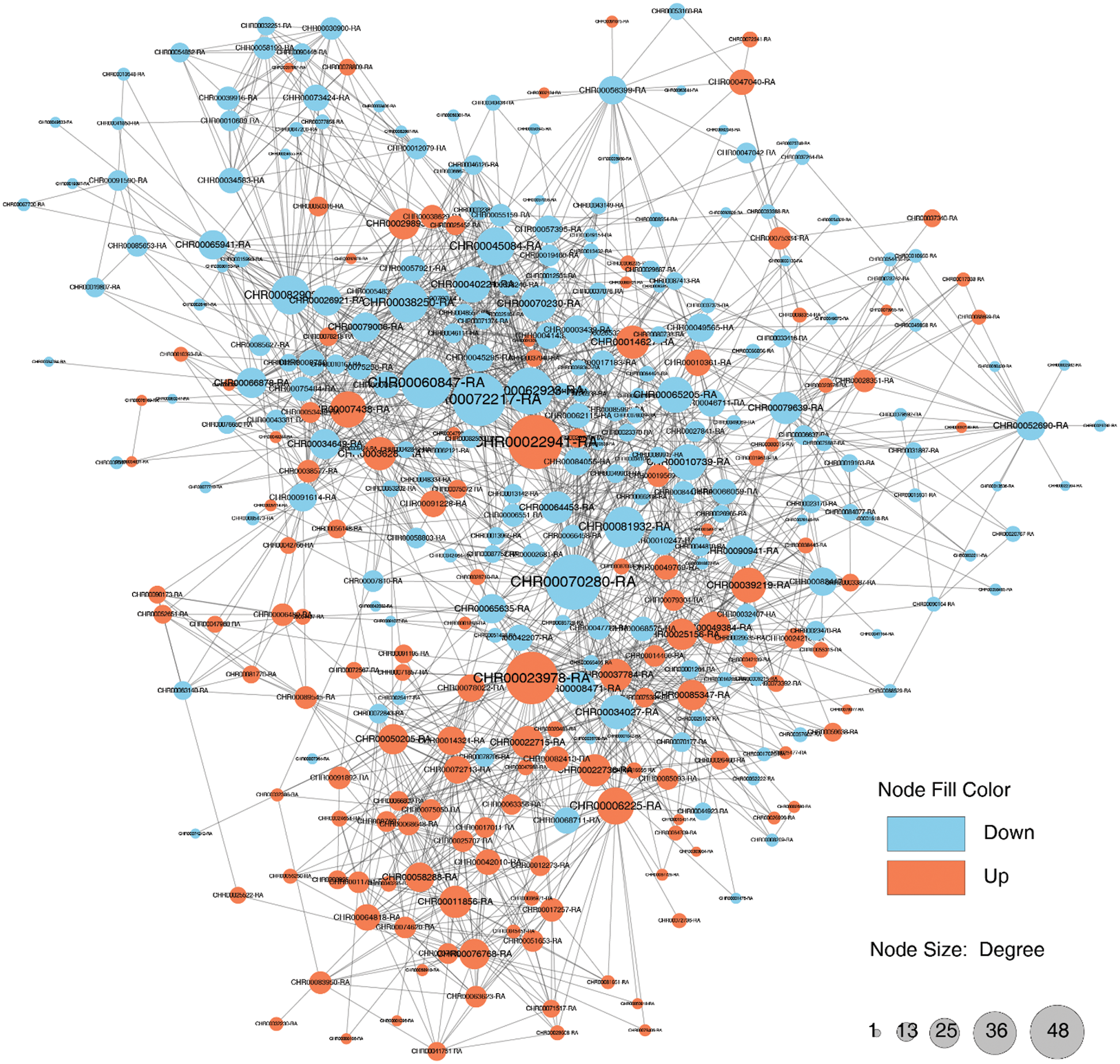 The upregulated proteins (spot 984, 1400) were found to play a key role in the network, as shown in Fig. 3. The data analysis revealed that this was separately associated with the defensive responses, and that energy metabolism and biosynthetic processes were correlated. Furthermore, it was speculated that these may be involved in the process of high-temperature stress in chrysanthemum. The downregulated proteins (spot 42, 1141), which play a key role in the network, were found to be mainly associated with the energy metabolism and biosynthesis processes. Therefore, the results of the present study indicated that the energy metabolism and biosynthesis were the main biological processes involved in the high-temperature stress of Dendranthema grandiflorum ‘Jinba’.

With the rapid development of plant proteomics, the use of proteomic technology has been isolated from a variety of ornamental plants, such as moonflower and lily. It identifies a series of high-temperature stress, response-related proteins. It was found that high-temperature stress can affect resistance-related proteins, such as heat stress proteins, energy and changes in the expression of proteins related to substance metabolism [5]. However, proteomic studies on the heat resistance of Dendranthema grandiflorum ‘Jinba’ were lacking.

The present study elucidated the molecular mechanisms of heat stress in Dendranthema grandiflorum ‘Jinba’ through the proteomic analysis by mass spectrometry. Many changes were observed at the protein level of energy and metabolic pathways, chaperones, and other functional proteins. The results of the proteomic analysis are discussed in detail below.

Maintaining a basic energy supply is essential for plants to resist adversity. Therefore, plants can respond to adversity stresses by regulating their energy metabolism [6]. The proteomic analysis of rice under heat stress conducted by Lin et al. [7] revealed that the mechanism of the response to heat stress is complex, and that the differential proteins include many proteins associated with different metabolic pathways, which are both upregulated and downregulated. In the present study, the proteins identified were associated with photosynthesis, and their expression levels were downregulated. Furthermore, some proteins were related to the energy metabolism pathway, and their expression levels were either upregulated or downregulated at least at some point in time. This also indicated that heat stress can severely affect energy metabolic pathways.

These results are consistent with the work of Wang, who reported that cellular glycolysis during warming from 30°C to 38°C was the main pathway for metabolic regulation [11]. This confirms that fructose, as a plant hexose receptor and signaling molecule, can regulate metabolism and growth by influencing the plant life cycle [12].

Heat-shock proteins (HSPs) act as molecular chaperones that bind to denatured proteins to form aggregates and reduce the damage caused by the adversity on plants. In plant leaves, these chaperones protect important organelles, such as photosynthetic systems and mitochondria, from damage under adverse conditions [13,14].

It has been demonstrated that HSP22 is involved in the folding of newly synthesized proteins in response to cellular stress, maintaining their proper configuration, allowing transmembrane proteins to cross the organism, aiding the transmembrane transport, and facilitating the recovery of damaged and denatured proteins [15]. Li’s study on soybean seedlings treated with high-temperature stress revealed that differentially expressed proteins present in the treated leaves, stems and roots were mostly associated with functions such as heat-stress proteins, photosynthesis and protein synthesis [16]. Shi et al. [17] reported a number of differentially expressed proteins in maize seedling leaves after high-temperature stress, with the upregulated expression mainly for heat-stress proteins, and glycolysis- and photosynthesis-related proteins; the downregulated expression was mainly for protein synthesis-related proteins and secondary metabolism-related proteins.

The upregulated differentially expressed proteins found in leaves under high-temperature stress in the present study were mainly heat-stress proteins, photosynthesis-related proteins, etc. The downregulated expression was mainly for protein synthesis and secondary metabolism-related proteins. This is similar to some of the results of the previous studies mentioned above. Hence, it can be concluded that heat-stress proteins play an important role in plant heat tolerance, and that the heat-shock in the upregulation of proteins implies that protein folding and assembly are enhanced by high temperature.

In addition, the present study also identified a small-molecule heat-excited protein of the HSP20 family by identification (spot 123, 290). Ul Haq et al. [18] reported that the accumulation of HSP20 was closely correlated to the acquisition of heat resistance. In addition, Muthusamy et al. [19] reported that its HSP accumulation and overexpression could also improve the heat resistance of crops. In the present study, the high temperature treatment induced the significant upregulation of the HSP20 expression, which was presumed to be involved in the folding of heat stress-associated proteins in chrysanthemum and assembly, aiding the transmembrane transport, and facilitating the recovery of damaged and denatured proteins.

Funding Statement: This research was supported by the National Natural Science Foundation of China (31800601) and Innovation Training Program for College Students of Sichuan Agricultural University (040-2021998185).