Abstract: The interaction between the nucleus and the different organelles is important in the physiology of the plant. Reactive oxygen species (ROS) are a by-product of the oxidation of organic molecules to obtain energy by the need to carry out the electron transfer between the different enzymatic complexes. However, they also have a role in the generation of what is known as retrograde signaling. This signal comes from the different organelles in which the oxidation of molecules or the electron transference is taking place such as mitochondria and chloroplasts. Furthermore, ROS can also induce the release of signals from the apoplast. It seems that these signals plays a role communicating to the nucleus the current status of the different parts of the plant cell to induce a changes in gene expression. In this review, the molecular mechanism of ROS retrograde signaling is described.

Reactive oxygen species (ROS) is a group of unstable molecules which shows either different levels of oxygen oxidation states or unpaired electrons which is characteristic of free radicals. Most common ROS include: singlet oxygen (1O2), ozone (O3), hydrogen peroxide (H2O2), superoxide (O2.-), hydroxyl free radical (HO.) and perhydroxyl radical (HOO.), which is the conjugate acid of the superoxide [1].

These highly chemically reactive molecules are generated by the metabolism of mitochondria [2], peroxisomes [3], chloroplasts [4,5], endoplasmic reticulum, glyoxysomes, and apoplast which can be related to cell wall and plasma membrane [6]. However there are enzymes that convert ROS into stable molecules such as oxygen or water to prevent catastrophic events [1]. Reactive oxygen species are also employed to carry out several physiological functions [7]. In this regard, ROS plays an important role in signal transduction, including the control of several metabolic pathways [8,9], responses to pathogen attack, as well as to biotic and abiotic stresses, and retrograde signaling [10,11].

The present review will describe the outcomes on retrograde signaling from 2005 to date. There are also excellent reviews of the topic done before this time period for interested readers [12–14].

There are several signaling phenomena in which ROS plays a role in retrograde signaling [15]. Among the most important are: ROS release by the plant vascular system [16,17], signaling by reactive electrophile species created by lipid oxidation [18], cell wall changes [19] and signaling based on H2O2 [4]. Fig. 1 shows a schematic description of the different findings included in the following sections of this review. 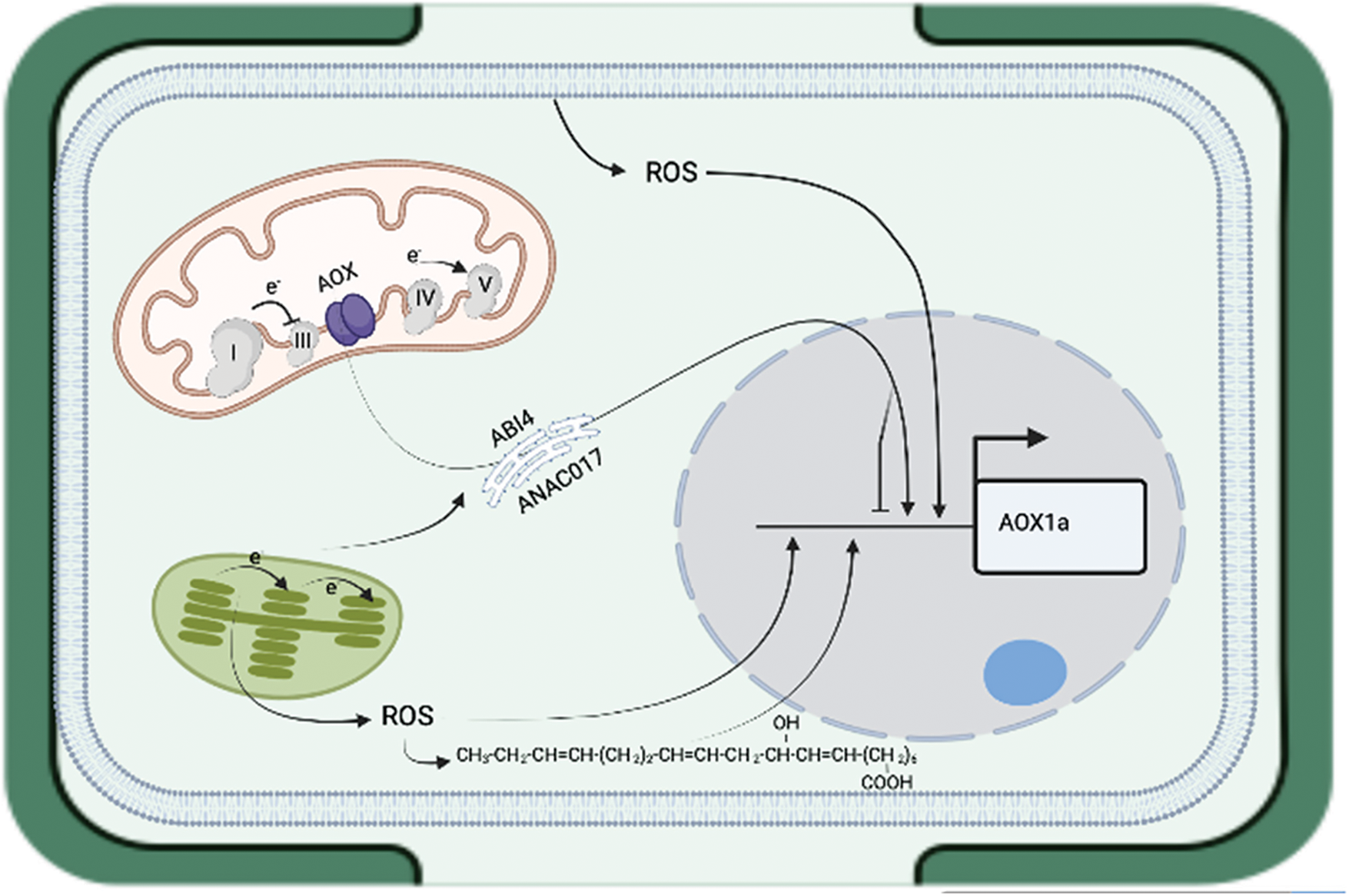 Figure 1: It is shown the different pathways and sources of the intracellular reactive oxygen species which can move from plasma membrane, mitochondria, chloroplast to the nucleus and alter the expression of nuclear genes. In the figure, it is included the gene AOX1a which had been utilized during several studies. Lines with arrows means induction and with a horizontal line means repression of activity

In chloroplasts, it appears that H2O2 as well as 1O2 play a role in the retrograde signaling to the nucleus [28]. Hydrogen peroxide is the longest half life ROS with about 1 microsecond, thus, it can be transferred directly to the nucleus in which some genes or maybe transcription factors can be modulated. Evidences supporting this statement came from studies with Nicotiana benthamiana, where the transference of H2O2 to the nucleus was concomitant with the activation of the ascorbate peroxidase gene NbAPXa [29]. Alternative, the singlet oxygen most likely is unable to leave the chloroplast to carry out the signal because it can be quickly quenched by water. Likewise, it can react with pigments, proteins and lipids which makes the long distance diffusion of this molecule pretty much unlikely [30]. Therefore, two different pathways had been observed: 1) by the oxidation of molecules such as the carotenoids inducing the production of β-cyclocitral, α-ionene, α-ionone and dihydroactinidiolide. Among these compounds, it appears that β-cyclocitral is the most important by upregulating 706 genes and downregulating 439 genes. Most of the positively regulated genes were found within the categories of environmental interaction, cell rescue, defense and virulence [31]; 2) phosphoadenosine 5’-phosphate is degraded by phosphoadenosine 5’-phosphate phosphatase, which could be be deactivated by changes in the redox state of the chloroplast by oxidation of two cysteine residues leading to accumulation of substrate. The prior can migrate to the nucleus to induce genes known as nuclear genes related with the plastid redox [32]. Moreover, it seems that the ABSCISIC ACID INSENSITIVE4 (ABI4) transcription factor also plays a role in the activation of genes in response to ROS activated retrograde signal from chloroplast, and in general it had been found to be involved in other signal pathways to control plant development such as: ABA signaling, sugar signaling, pathogen response, lipid mobilization, among others [33].

Most likely the retrograde signals carry out the control of ABI4 expression at both the transcription and post-translation levels, although this phenomenon is fairly unknown. However, it was found by using treatments to induce retrograde signals, that the transcriptional regulator known as PTM is released from the chloroplast envelop and transported to the nucleus. Moreover, in the nucleus, this regulator induce ABI4 gene expression [34]. The final outcome depends upon the different signals perceived by the nucleus such as ABA presence, redox status and retrograde signals from mitochondria [33].

The GUN acronym means genomes uncoupled and this phenomena was studied for first time in mutants of C. reinhardtii [35]. After that, gun mutants in Arabidopsis were found designated as GUN 3, GUN4 and GUN5 and it was shown that it is a signal from chloroplast to nucleus controlling the activity of Lhcb1 gene. This message was important for controlling the biosynthesis of chlorophyl. GUN5 gene was cloned and shown to be a chloroplast subunit of the Mg-Chelatase enzyme. Furthermore, it appears that the precursors of the chlorophyll biosynthesis pathway control the gene expression rather than the enzyme subunit [36]. It had been mentioned that this retrograde signal is still not well understood [37] although it is related with the biotic stress during cucumber mosaic virus infection [38].

The molecule methylerythritol cyclodiphosphate (MEcPP) is an isoprenoid precursor which is involved in the response to the Pseudomonas syringae, a biotrophic pathogen, and to abiotic stresses such as wounding and high light stress [39]. The ceh1 mutant which does not express the enzyme 1-hydroxy-2-methyl-2-(E)-butenyl-4-diphosphate synthase that carries out the enzymatic conversion of MEcPP to hydroxymethylbutenyl diphosphate shows large levels of MEcPP. This mutant also shows high levels of HDL which is a nuclear gene encoding the plastidial located enzyme hydroxyperoxide lyase, which is important in the biosynthesis of metabolites playing a role as stress responsive signal. Studies with this mutant concluded that MecPP is responsible for the induction of the HDL nuclear gene and the large levels of salicylic acid which explains the high resistance of this mutant to biotrophic pathogens such as Pseudomonas syringae [40]. Protemic and transcriptomic analysis of the ceh1 mutant showed that MEcPP induces the accumulation of some unfolded protein response in the endoplasmic reticulum which is important for the cell to face the endoplasmic reticulum stress which is related with the presence of stress conditions [41].

This phenomenon was first described in the communication between organelles within cells [47]. However, in plants it turns out that this phenomenon mediates the communication from cell to cell, leading to a systemic spread of a signal in presence of different stress factors [16]. It appears that this response is triggered by ROS generated by the respiratory oxidase homologue (RBOH), which plays the same role as the NOX protein in mammalian cells [48]. This enzyme is located at the cell apoplast, and it is activated by the increase of calcium concentration of (Ca2+)cys in the cytoplasm. It appears that the intracellular calcium can bind to the EF hand motifs of the RBOH present in the N terminal side [48]. Moreover, RBOH keeps active by inducing the opening of the calcium channels [49]. The increment in ROS in the apoplast of a cell induces the increase of ROS by the same mechanism on the neighbor cell. In this way, the system signal is spread throughout the plant tissues. Furthermore, it has been shown that this mechanism of signaling plays a role in seed germination, lignification, abiotic stress responses, plant defense, root hair formation, closing stomata, pollen tube growth, and responses to wounding [48].

2.4 ROS Induce a Signal from the Cell Wall

The apoplast is the region composed of the cell walls between the cells, and it is delimited by the plasma membrane. In the apoplast, the production of H2O2 and 1O2, is carried out by cell wall peroxidases, and NADPH oxidases, also known as respiratory burst oxidase homologs [54]. The apoplast can start a retrograde signaling by the launch of H2O2 apoplastic oxidative burst outside of the cytoplasm which can be recognized by the HPCA1, which is a leucine-rich-repeat receptor kinase. This receptor includes two cysteine residues in the extracellular domain which can undergo an oxidation which in turn induces the autophosphorylation of the receptor and the activation of calcium channels [55]. In mammalian cells, the need for the presence of anion channels in the membrane to transport 1O2 to the cytoplasm has been observed [56]. However, within plants, the presence of anion channels remains to be demonstrated. On the other hand, the transport of H2O2 into the cytoplasm can be carried out by aquaporins and indeed, specific aquaporins have been identified in Arabidopsis [57]. Furthermore, it appears that the difference in the oxidative status between apoplast and symplast can play a role in signal transduction. The protein GRIM REAPER which includes a signal peptide for exportation to the extracellular space, can be an example of the aforementioned. The proteolysis of this protein carried out by metacaspase 9 requires production of ROS by the respiratory burst oxidase homolog. In addition, the small peptide released is a ligand for the pollen specific receptor like kinase 5, which initiates the signal transduction to induce cell death [58].

It is clear that ROS are not only by-products of molecule oxidation, but rather play an important role in sending messages to the nucleus. This is called retrograde signal, and it plays a role by alerting the nucleus about the physiological status of a particular organelle. The study of these molecules will help in the elucidation of the role that plays the mechanism of the interaction between nucleus and organelles on plant physiology.