Abstract: Grain size traits are critical agronomic traits which directly determine grain yield, but the genetic bases of these traits are still not well understood. In this study, a total of 154 chromosome segment substitution lines (CSSLs) population derived from a cross between a japonica variety Koshihikari and an indica variety Nona Bokra was used to investigate grain length (GL), grain width (GW), length-width ratio (LWR), grain perimeter (GP), grain area (GA), and thousand grain weight (TGW) under four environments. QTL mapping analysis of six grain size traits was performed by QTL IciMapping 4.2 with an inclusive composite interval mapping (ICIM) model. A total of 64 QTLs were identified for these traits, which mapped to chromosomes 1, 2, 3, 4, 6, 7, 8, 10, 11, and 12 and accounted for 1.6%–27.1% of the total phenotypic variations. Among these QTLs, thirty-six loci were novel and seven QTLs were identified under four environments. One locus containing the known grain size gene, qGL3/GL3.1/OsPPKL1, also have been found. Moreover, five pairs of digenic epistatic interactions were identified except for GL and GP. These findings will facilitate fine mapping of the candidate gene and QTL pyramiding to genetically improve grain yield in rice.

Rice (Oryza sativa L.) is an important staple food feeding more than half of the world’s population. To meet the demand for food for the rapid growth of the population, continuous improvements of the rice yield will be necessary [1]. Rice grain yield is major determined by the number of panicles per plant or effective tillers per plant, the number of grains per panicle, and the grain weight [2,3]. Grain size, which is closely associated with grain weight, is made up of grain length, grain width, grain thickness, and length-to-width ratio, etc., which are key determinants of grain yield and grain quality [4,5]. Therefore, the improvement of grain size traits is one of the most important tasks for rice breeders to increase rice production.

Using chromosome segment substitution lines (CSSLs) is a good strategy for QTL mapping. The substitution lines are the complete integration of the substituted segments with the stability of a certain character, which could reduce the interference of background noise and improve the accuracy of QTL mapping [48]. A large number of CSSLs sets have been developed to identify the QTLs for rice agronomic traits, including the grain size traits [47,49–53].

Koshihikari is a well-known japonica rice variety in Japan, which exhibits a good eating quality, cold tolerance at the booting stage, and high resistance to pre-harvest germination [54]. Nona Bokra is a typical indica variety from India with high tolerance to salt stress [55,56]. Utilization of Koshihikari and Nona Bokra to identify QTLs for salt tolerance and rice grain quality have been reported [54,55], but there is no report on grain size traits. In this study, a CSSLs population containing 154 lines, which is derived from a cross between Koshihikari and Nona Bokra, was used to analyze the QTLs for grain size traits in rice under four environments. The results could provide valuable information to further elucidate the genetic basis of rice grain size as well as for marker-assisted selection in rice breeding.

The CSSLs population consisting of 154 lines was derived from the cross of a japonica cultivar Koshihikari (recipient parent) and an indica rice cultivar Nona Bokra (donor parent). The construction of the CSSLs population was described by Hao et al. [54]. In brief, the F1 plants were obtained from the cross of Koshihikari and Nona Bokra, and then backcrossed to Nona Bokra three times to produce 680 BC3F1 seed. Based on 102 polymorphisms CAPS and SSR markers covering the whole rice genome, 71 individuals which have a single, relatively long heterozygous chromosome segment were selected [57,58]. a total of 3266 BC3F2 plants were produced from the self-pollinated of 71 individuals. Based on the marker-assisted selection (MAS), 154 BC3F2 plants were finally selected as the CSSLs population. The field trials were conducted in Shanghai (SH, 121°24′ E, 31°00′ N) and Lingshui (LS, 110°00′ E, 18°31′ N) during the 2015 and 2016 rice-growing seasons, respectively. Trials in each environment were laid out in a completely randomized block design, with a planting density of 20 cm × 20 cm. Three replicates were growth and each line was planted in four rows with six plants. The management of field experiments including irrigation, fertilizer application and pest control, was in line with normal agricultural standard practices.

A total of 126 polymorphism markers between Koshihikari and Nona Bokra was selected to screen the CSSLs population. QTLs for each trait were detected using QTL IciMapping 4.2 with inclusive composite interval mapping (ICIM) model, and a threshold LOD of 2.5 was applied [59,60]. The additive effects, genetic parameters and variation percentages of the QTLs were also estimated. The QTL named followed the method of McCouch et al. [61]. The genetic map was drawn using MapChart version 2.32 software [62].

3.1 Phenotypic Variation in Parents and the CSSLs Population

The grain size traits of the parents and 154 CSSLs population, such as grain length (GL), grain width (GW), length-width ratio (LWR), grain perimeter (GP), grain area (GA), and thousand grain weight (TGW), were list in Table 1. Because of the insensitivity to photoperiod, the indica variety Nona Bokra could not harvest the seeds in Shanghai. Therefore, we can only compare the grain size traits of the parental in Lingshui. All traits exhibited significant differences between parents in Lingshui 2015 and 2016. The value of grain size traits in Nona

Bokra was significantly higher than that of Koshihikari except for GW in Lingshui 2015 and 2016. A wide range of values for all the grain size traits was observed in CSSLs population (Table 1). The frequency distribution of each trait displayed a continuous variation under four environments, and the absolute values of skewness and kurtosis were less than 1, suggesting these traits followed a normal distribution and were suitable for QTL analysis (Fig. 1, Table 1). 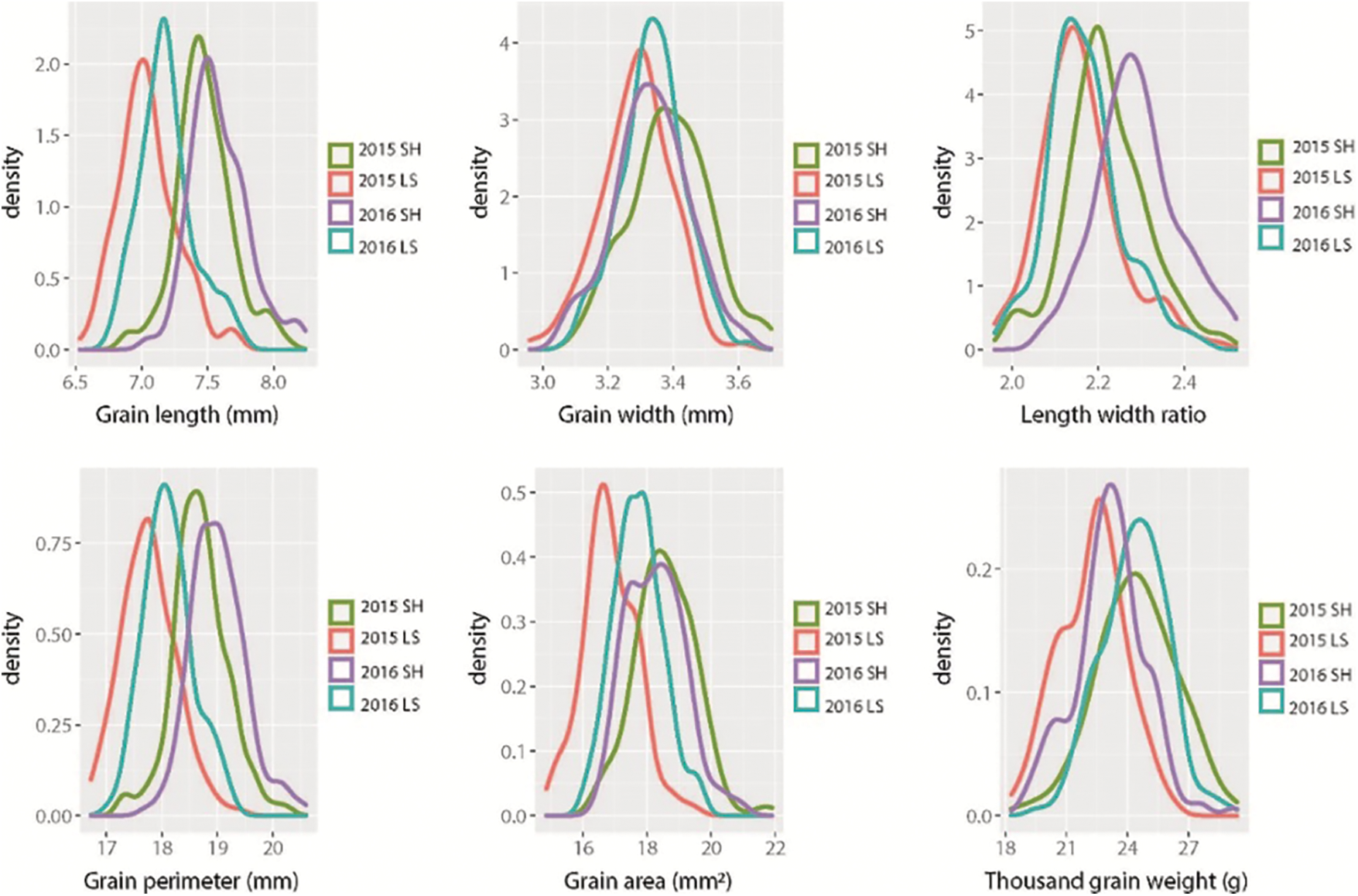 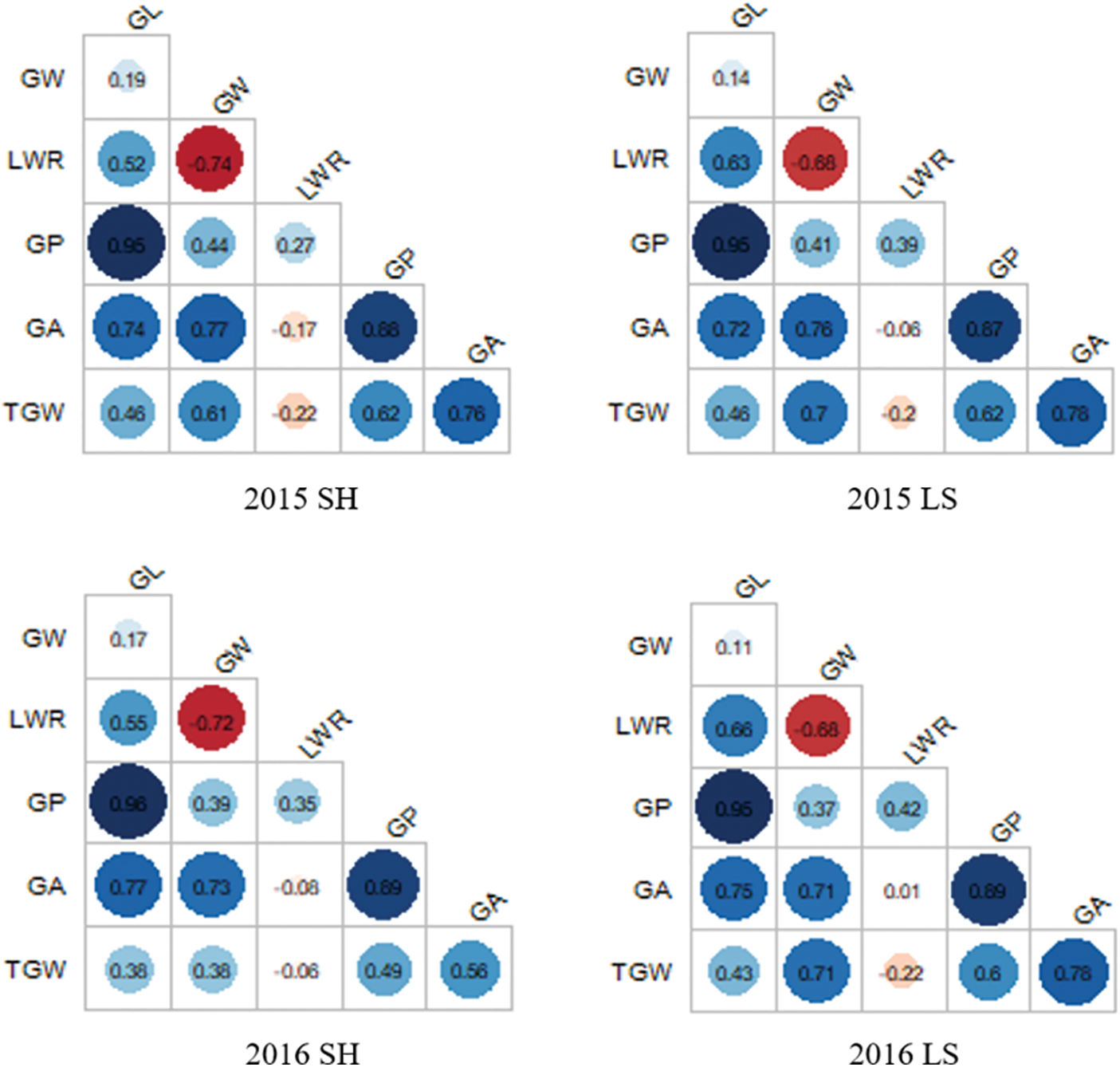 According to the results of QTL mapping, we further integrated the known grain size genes and QTL mapping in this study. One known grain size gene, qGL3/GL3.1/OsPPKL1 is located near to the marker STS3-1 on chromosome 3 (Fig. 3). qGL3/GL3.1/OsPPKL1 encodes a type 2A phosphatase and function as a negative regulator for regulating rice grain length [25–27]. We further compare the sequence of qGL3/GL3.1/OsPPKL1 between the two parents, a T/C non-synonymous change in the 11th exon was identified (Fig. S1). According to previous studies, this C/T non-synonymous change can influence the function of GL3.1, thereby affecting grain length [26].

In the present study, we identified sixty-four QTLs for six grain size traits, including fourteen QTLs for GL, nine QTLs for GW, ten QTLs for LWR, twelve QTLs for GP, ten QTLs for GA, and nine QTLs for TGW (Table 2). Of these, thirty-eight QTLs caused an increase and twenty-six QTLs caused a decrease in the corresponding grain traits in the CSSLs. This suggests that grain size traits are controlled by complex genetic mechanisms. A number of QTLs affecting grain size traits have been mapped previously. For GL, eleven of the fourteen QTLs (qGL2-1, qGL2-2, qGL3-2, qGL3-3, qGL3-4, qGL3-5, qGL4, qGL8-1, qGL8-2, qGL10, and qGL12) were located in the same regions or close to previously reported [12,64–68]. The known grain size gene, qGL3/GL3.1/OsPPKL1, was located in the region of qGL3-3 [25–27]. The sequence analysis of qGL3/GL3.1/OsPPKL1 revealed that a single base-pair substitution between Koshihikari and Nona Bokra was found (Fig. S1). For GW, seven of the nine QTLs (qGW1-1, qGW1-2, qGW2-1, qGW2-2, qGW6, qGW7, and qGW8) were located in the same regions or close to previously reported [49,64,65,67–69]. But no known grain size gene was located in those QTLs regions. The QTL, qGW8, located on chromosome 8 was detected under four environments and the phenotypic variation was range from 9.8%–16.5%, suggesting a potential gene controlling grain width may exist in this region. Four of the ten QTLs for LWR (qLWR1-1, qLWR2-2, qLWR3-1, and qLWR3-3) were located in the same regions with previously reported [65,67,69]. The remaining six QTLs have not been reported before, especially for qLWR1-2 and qLWR3-2, which were detected at least under three environments, suggesting a potential gene controlling length-width ratio may exist in those two regions (Table 2). Similarly, for TGW, six of the nine QTLs (qTGW2-2, qTGW3, qTGW8-1, qTGW8-2, qTGW10, and qTGW11) were located in the same regions to previously reported [49,64,70]. Of the remaining three QTLs, qTGW2-1 and qTGW6 were detected under four environments, but previous studies have not detected these two QTLs, suggesting a potential gene controlling thousand grain weight may exist in those two regions (Table 2). A total of forty-two QTLs were detected in the above four traits, of which fourteen QTLs were not previously reported, indicating that QTL mapping using CSSLs population can reduce the interference of background noise and make some minor QTLs could be detected. In addition, we found that some known grain size genes, such as GS3, GW5, GL7, etc., were not detected in this population, one possible reason is that the two parents harbor the same allele.

GP and GA are also important agronomic traits associated with grain size, but no studies on QTL mapping of rice GP and GA have been conducted. In our study, a total of twelve and ten QTLs were detected for GP and GA, respectably (Table 2). Especially for qGP2, qGA2, and qGA3-1, these three QTLs were detected under four environments, which suggests that these QTLs were stable and worth further fine mapping and cloning in the future.

4.3 Potential Utilization of CSSLs and QTLs in Rice Breeding

In our study, the CSSLs population showed a wide phenotypic variation and exhibited transgressive segregants in all tested environments (Table 1, Fig. 1). Therefore, it may be the best breeding material for breeders to improve grain size traits. The thirteen multi-trait QTLs identified in this study can be targeted for the improvement of rice grain yield and appearance quality. In addition, seven QTLs stably expressed in four conditions detected in this study lay the foundation for further validation, fine mapping and positional cloning.

In this study, the grain size traits including GL, GW, LWR, GP, GA, and TGW were investigated using a CSSLs population. We identified 64 QTLs for 6 grain size traits, of which 36 QTLs were novel and 7 QTLs were identified under four environments. The known grain size gene, qGL3/GL3.1/OsPPKL1 is located near the marker STS3-1 on chromosome 3, showed a non-synonymous change between two parents. Moreover, five pairs of digenic epistatic QTL were identified except GL and GP. A highly phenotypic variation of digenic epistatic QTL indicated that the epistatic effects should be considered during rice breeding.

Author’s Contributions: JPG, SKJ and YJL proposed the concept; SLW, RAW, TT, SWJ, TS, LNX, XLC and SKJ collected the phenotypic data; YJL, SKJ, SLW and RAW analyzed the data; YJL drafted the manuscript; YJL and JPG revised and finalized the manuscript. All authors have read and agreed to the published version of the manuscript.

Figure S1: Sequence alignment in qGL3/GL3.1/OsPPKL1 between Koshihikari and Nona Bokra. The number and single letter indicate the base position and difference, respectively. The letters in parentheses indicate amino acids