Abstract: In this paper, an experimental model of a horizontal cantilever beam with a rotating/oscillating attached to the shaker for harmonic excitation at the one end and a gyrostabilizer at the other end is built to verify the equations of the Lagrangian model. The primary focus of the study was to investigate the parameters of excitation amplitude, natural frequency, rotating mass (disk mass), and disk speed of gyro that would minimize the amplitude of the beam to identify these effects. Numerical and experimental results indicate that the angular momentum of the gyrostabilizer is the most effective parameter in the reduction of beam displacement.

The application of rotating and oscillating types of vibration control systems can be found in several systems such as space structures, robotics, aircraft, ships, etc. [1–4]. Due to a wide variety of uses, several studies and investigations have been performed on non-linear dynamics of rotating and oscillating tip mass systems used as vibration control for the past several years. Studies are still continuing with new published materials on this interesting and multi parameter topic of vibration control [5–7]. Hence, several studies have been performed both theoretically and experimentally on non-linear dynamics of a beam with rotating and oscillating tip mass under variations of parameters subject to sinusoidal and random excitation. Most common used in these studies is the Bernoulli-Euler beam model, which includes a vertical cantilever beam with a concentrated tip mass at one end [8]. However, Timoshenko theory is considered to be an improvement since shear deformation and rotational inertia of the beam are also taken into account [9,10].

Currently, a large number of researchers remain focused on flexible structures with passive dynamic vibration absorbers such as rotating mass (flywheel), beam, liquid, pendulum, etc., used for several engineering applications [11–14]. The passive vibration absorbers to be effective and desirable as a vibration control device due to its simplicity and lower cost. The dynamic behavior of a beam–tip mass-pendulum system was investigated to determine the autoparametric interaction between the beam and pendulum frequencies effecting beam displacement under sinusoidal excitation [15]. An orientable flexible beam with a tip mass and passive pendulum attached to the tip mass was researched under sinusoidal excitation experimentally [16]. Also, the passive vibration absorber is activated by the structural motion without any external input to reduce displacement which in turn makes the system beneficial [17]. Although having desirable results, passive vibration control apparatuses have their limitations and require activation energy from the system and requires a starting oscillation in order to provide energy for oscillating the pendulum. This limitation of passive vibration control systems have lead the need and development of active vibration control systems, hence the area of high interest and research work has been concentrated towards active systems. However, active control systems require external energy/power input to operate the vibration control apparatus, hence active vibration absorbers are more complex, unreliable and un-robust due the requirement to control internal hardware such as sensors and control equipment that are not present in passive systems [18].

Meanwhile, several researches have been investigating different types of vibration control apparatuses in range from simple to complex; for instance the use of gyrostabilizers, being a complex yet effective vibration control apparatus is used for several engineering applications such as stabilization of wheeled vehicles [19,20] and wind induced vibrations [21]. The apparatus including the gyrostabilizer used in this study supplies the external energy requirement by an electric motor in a rotating gimbal to the flywheel (disk mass). The remaining energy provided to the apparatus comes from the momentive motion of gyrostabilizer and is therefore classified as a passive control apparatus under several engineering studies and applications. The gyrostabilizer is effective for bending moments rather than shear forces due to the utilization of gyroscopic moment to reduce or eliminate undesirable motion [22–24]. Therefore, compared to conventional active mass dampers for vibration suppression, the gyrostabilizers are much effective in a larger frequency range and represent a weight and volume saving due to the angular momentum of the gyroscope [11].

For the modeling of antennas, robotic manipulators, appendages of aircrafts, spacecrafts or vehicles, etc., beams carrying a tip mass with (or without) rotary inertia can be used. In this study, the vibration control results of a horizontal cantilever beam with a rotating/oscillating tip mass (gyrostabilizer) at one end and harmonic excitation at the other end has been investigated through theoretical and experimental methods. Parameters of excitation amplitude, natural frequency of the beam tip mass system, rotating mass (disk mass) and disk speed that would minimize the amplitude of the beam were identified alongside the effects to the system. The apparatus included an oscillated mass connected to the free end of the beam with a small ball bearing and disk with DC electrical motor mounted to the oscillating tip, while the other end was mounted to a shaker.

Figure 1: Photography of the experimental system 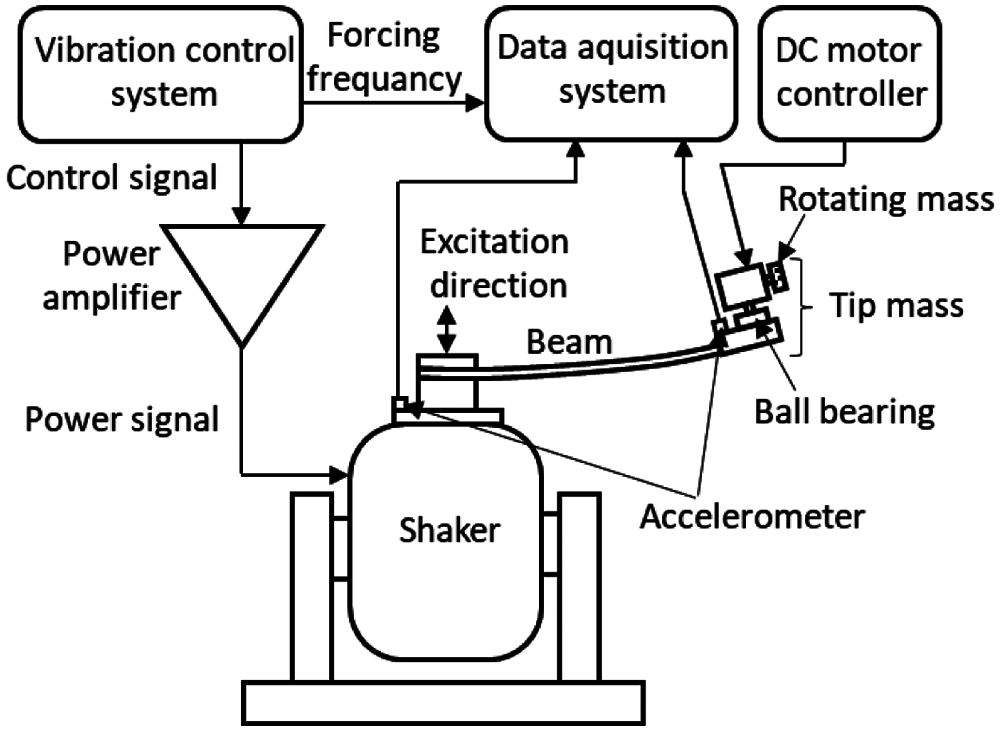 Experimental studies were performed for different parameters such as length of the cantilever beam system, rotating mass, rotating speed of the mass and forcing amplitude. In order to determine the relationship between varying parameters, one parameter was changed and the rest of were kept stable for each experimental run.

The mathematical model of the cantilever beam with tip mass (gyrostabilizer) was derived through the displacement model of the cantilever as shown in Fig. 3. As seen from the Figure, the displaced cantilever beam with length (L) and gyrostabilizer mass (Mt) at the free end is subject to a harmonic base excitation (z(t)) from the opposing end, which is attached to the shaker. In the equation models used for these experiments, the denotations are as follows: arc-length (s), harmonic excitation (z = z0cos(ωt)) with varying forcing frequencies (ω) and forcing amplitudes (z0). Due to the beam displacement, horizontal and vertical displacements at the free end and orientation angle were denoted as (u), (v) and (φ), respectively.

Figure 3: Model of the displaced form of cantilever beam with gyrostabilizer tip mass

The kinetic energy equation of the cantilever beam with gyrostabilizer tip mass can be written in the form shown below in Eq. (1), derived from the free-body motion diagram in Fig. 3. In the equation, u(s, t) and v(s, t) indicate displacements along the inertial directions of the beam with respect to arc-length and time (dot is indicative of derivative with respect to time t).

The kinetic energy of the gyrostabilizer can be expressed in the form of Eq. (2), derived from the free-body motion diagram in Figs. 3 and 4.

The potential energy of the cantilever beam with gyrostabilizer can be defined in the form of Eq. (3).

The dissipation function (D) is defined in the form of Eq. (4).

Orientation angle of the beam is defined in the form of Eq. (5) [25–27] which indicates a partial derivative with respect to arc-length (s) along the beam.

The displacement of the beam is expressed in Eq. (6) [25,26] with mathematical manipulation and eliminating terms of higher order.

From Eq. (5) the following equation are obtained:

Derivative of Eq. (7) is expressed as:

Beam deformation with respect to arc-length and time can be expressed by accepting the first mode of the shape function ψ(s) [27] and by acknowledging the tip mass being significantly larger than the beam mass. By using binomial expansion and mathematical manipulation, Eqs. (6)–(8) have been expanded into the following equations:

If therefore, the beam displacement, velocity and acceleration at the tip of the beam can be written in the form of Eq. (10).

Therefore, the kinetic energy of the system can be defined by using the above equations, while the transverse displacement (v) at the free end can be expressed as in Eq. (11).

The potential energy of the system in Eq. (3) can be defined in terms of the transverse displacement (v) at the free end can be expressed as in Eq. (12).

Constants G1 through G9 used in the above equations can be expressed as in Eq. (13).

3.1 Equation of Motion of the Beam at the Free End

Energy method has been used to obtain equations of motion for the cantilever beam with gyrostabilizer tip mass. The kinetic energy (Eq. (11)), dissipation function (Eq. (4)) and potential energy (Eq. (12)) were substituted into Lagrange’s Equation (Eq. (14)) and after mathematical manipulation, the beam equation has taken the following form as seen in Eq. (15):

3.2 Equation of Motion of Gyrostabilizer

Theoretical and experimental studies were performed for varying parameters such as the natural frequency of the cantilever beam system, rotating mass, rotating speed of the mass and forcing amplitude. In order to accurately determine the relationship between the parameters, one parameter was changed as the rest were kept stable for each individual test. 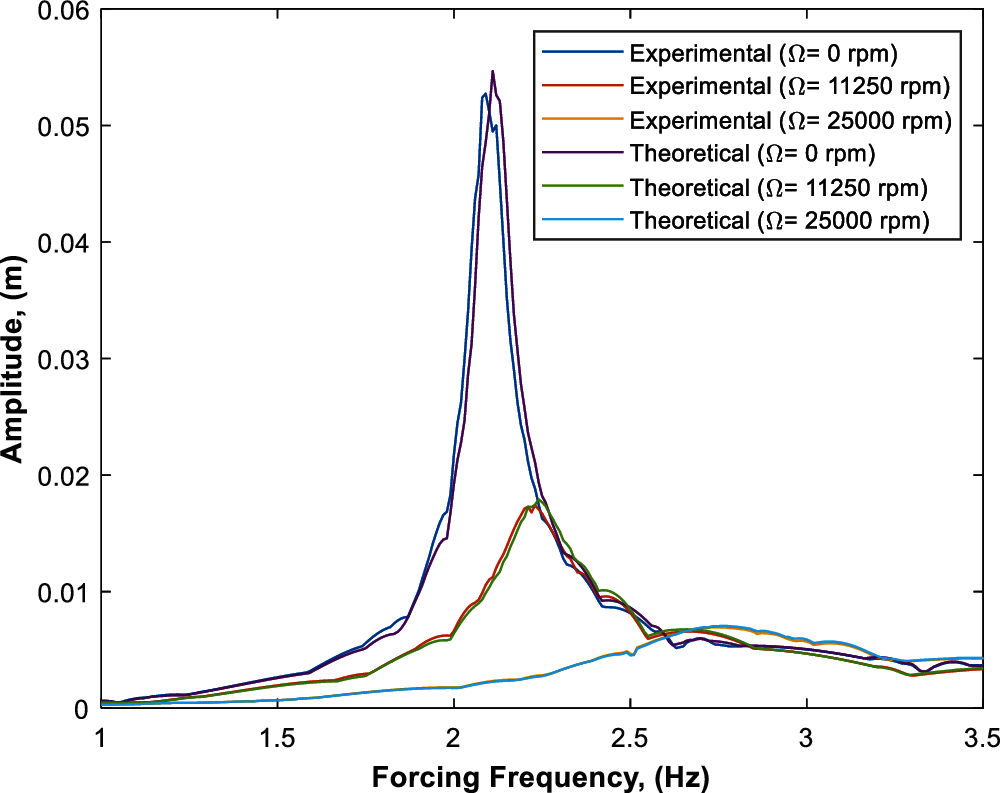 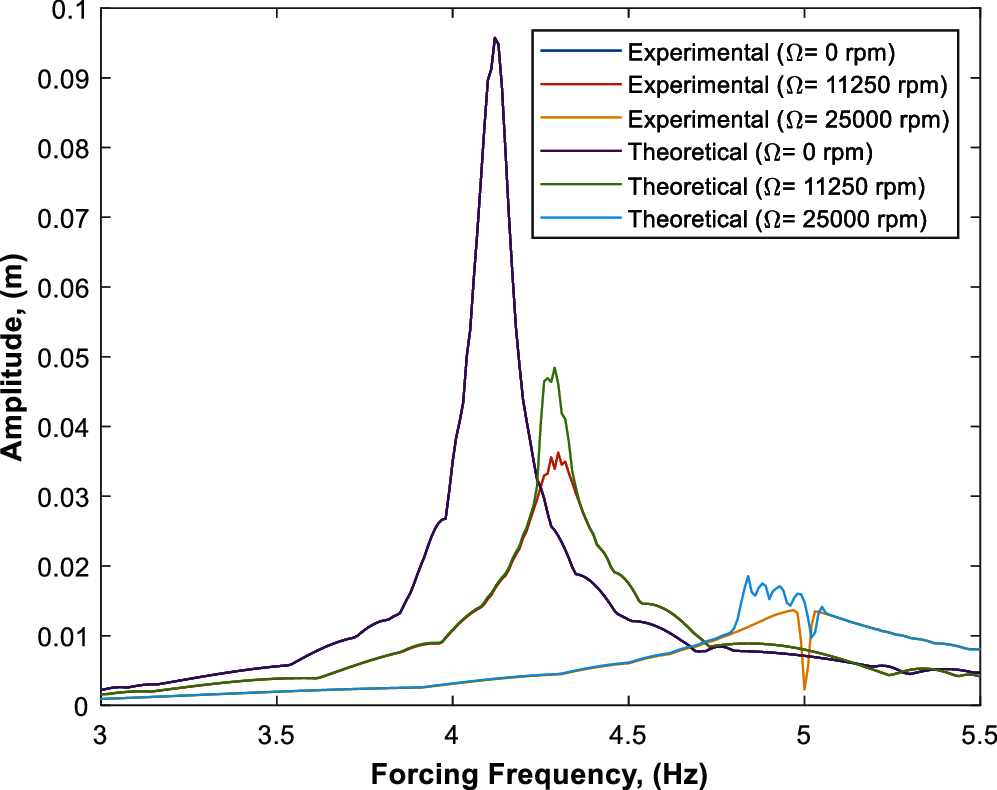 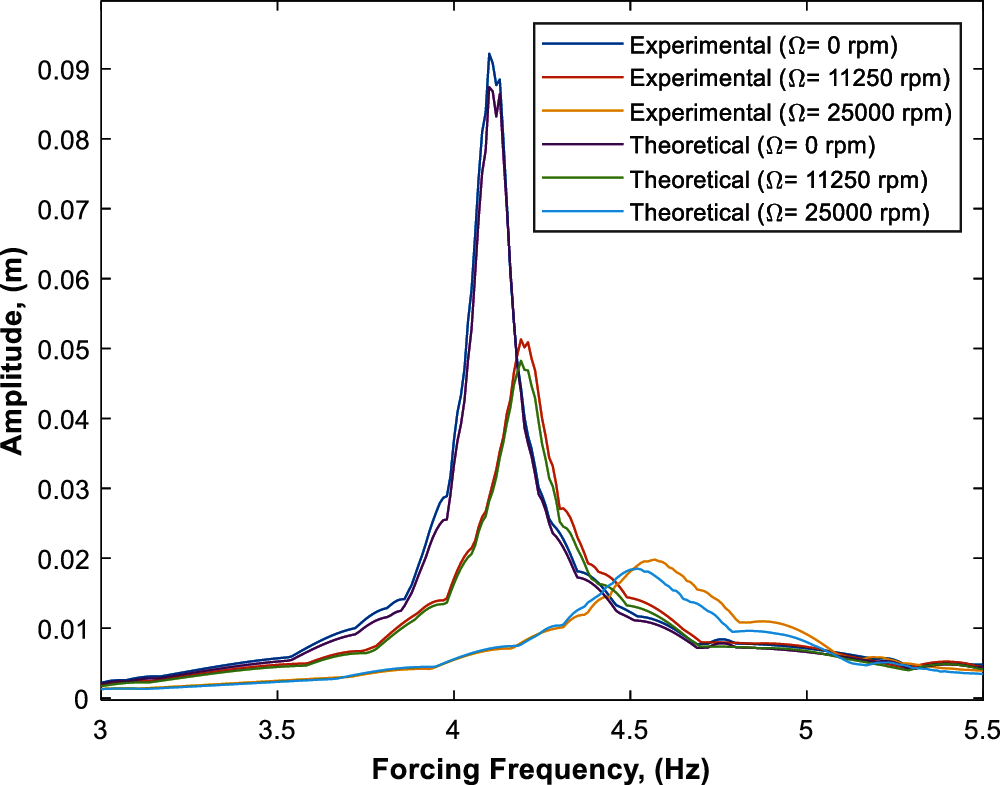 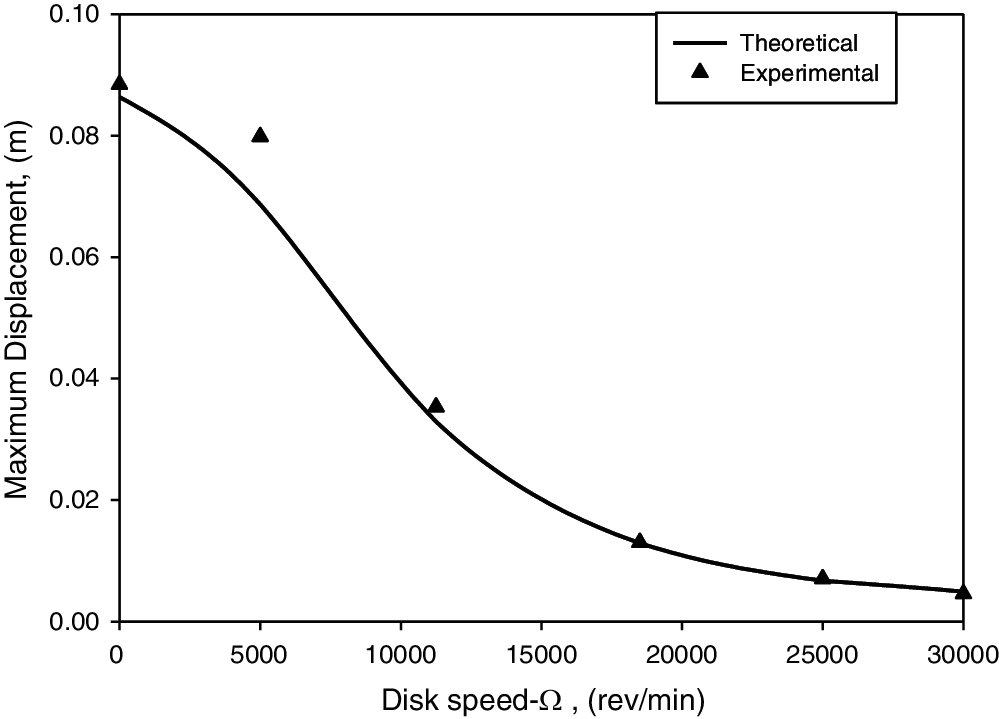 Theoretical and experimental frequency response curves of the beam with gyrostabilizer system were obtained with constant parameters of the system natural frequency (ωn = 4.13 Hz), forcing amplitude (z0 = 1.3 mm) and rotating mass (m = 0.0263 kg) and varying disk speeds of Ω = 0, 11250 and 25000 rpm as seen in Fig. 9. The only difference between Figs. 7 and 9 are the disk mass being 0.0344 kg in Fig. 7 and 0.0263 kg in Fig. 9. The reduction in disk mass showed less effect on reducing the amplitude of the system when compared to the higher disk mass due to the reduced inertia moment of the gyrostabilizer tip-mass.

The gyrostabilizer with lower disk mass also reduced beam amplitude sıgnificantly as seen from Fig. 10, however the amplitude of the beam was not significantly reduced after speeds of 20000 rpm. The only difference between Figs. 8 and 10 are the disk mass being 0.0344 kg in Fig. 8 and 0.0263 kg in Fig. 10. Reducing the disk mass was still effective in reducing the beam amplitude, but it caused an increase in the optimal speed of the disk due to decreasing the inertia moment of the gyrostabilizer as seen in Fig. 10.