Abstract: Urban road traffic noise pollution has always been identified as a severe problem that affects urban populants. In developing nation, road traffic noise pollution depends on the composition of heterogeneous traffic composition. These traffic compositions contain vehicles, which have different sizes, speeds variations, a different dimension of vehicles. Environmental noise measurements have been carried out during day-time and night-time in different locations of tier-II city of India. The noise levels have been continuously measured over 24 h periods using kimo DB 300 class-2 noise level meter. The data contained in this research paper represent 768 measurement hours. All the information has been used to investigate the time patterns of the noise levels under a wide range of different conditions and to study the relationships between noise levels and traffic in urban areas. Maximum LAeq was observed 73.3 dB(A) at B14 location and the minimum was recorded 65.7 dB(A) at C3 location, which was greater than the central pollution control board (CPCB) prescribed limits during night time. A major reason for the generation of road traffic noise is due to the equal composition of 2-wheeler and 4-wheeler on the arterial road and heavy vehicles were recorded during morning peak and evening peak even though they are prohibited during peak hours.

Various factors contribute to increase the noise levels in urban areas. One of the factors is the increase in the urban population, which contributes to high traffic volume combined with increased intensity [1]. In most urban areas, the corridors are developed in close proximity where people live and work, which leads to limited space and thus increases the number of high-rise buildings [2]. This type of settlement creates a dense environment in urban areas, thus increasing the traffic volume. Numerous countries have implemented new technologies to control noise pollution in urban areas [3]. For example, low noise generating vehicular engines, changes in quality of tires, changes in road material. These technologies have proven to reduce the noise on an individual scale. However, the overall noise pollution in urban areas is still increasing because of increasing traffic volume.

Road traffic noise is the most significant source of environmental noise pollution in cities. Noise is almost one of the harmful agents for citizenships; therefore, many countries have introduced noise emission limits for vehicles and issued other legislation to reduce road traffic noise [4]. In recent years, in certain countries, new restricting laws to control civic road traffic noise have been performed [5].

According to the literature available, it has been concluded that a large number of people are exposed to high traffic noise levels in the urban areas. KIMO DB300/2 sound level meter was used for noise data collection. The sound level meter is an acoustic measurement instrument from France with the main features of a conventional and integrating-averaging sound level meter and analyzer with storage.

The study area selected for noise mapping is Surat City (Fig. 1). The city covers an area about 326.515 sq. km and divided in seven zones. This research is based on the results of noise level measurements and traffic monitoring carried out 31 different locations of tier-II city (Surat City) of Gujarat state, India. Surat is a city located in the western part of India in the state of Gujarat. It is one of the most dynamic city of India with one of the fastest growth rates due to immigration from various parts of Gujarat and other states of India. The modern city of Surat is one of the fastest-growing places in the state of Gujarat. Famous all over the world for its diamond and textile business, Surat is the second-largest city in the state after Ahmedabad. Surat is regarded as 4th fastest developing cities of India with a bustling metropolitan area home to over 6 million people. According to a recent Census of India (2011), Surat has recorded a growth of 63.3% in its population from 2001 to 2011 [6]. 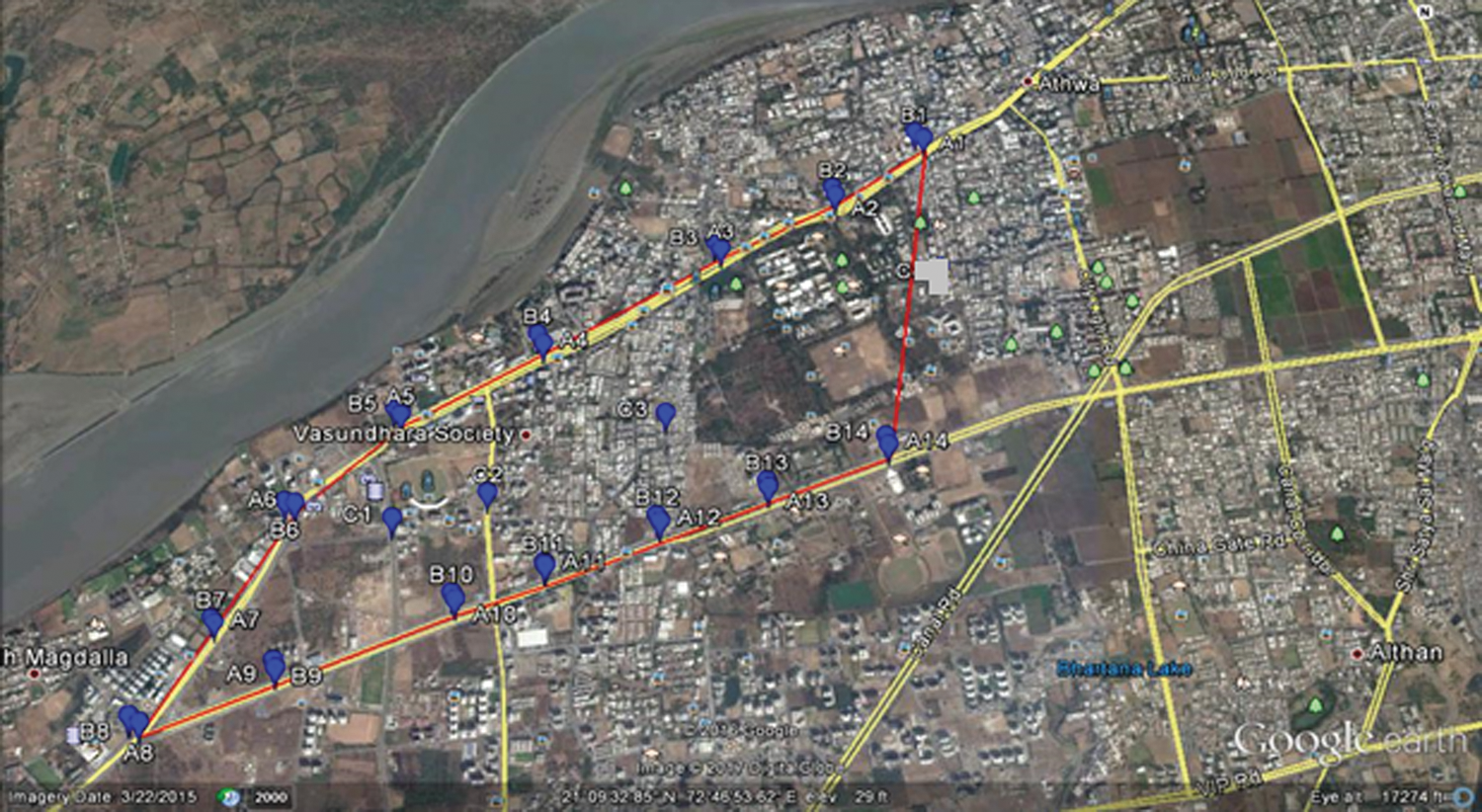 The study was conducted in month of May 2016 and done at 31 locations of South-West zone of Surat City’s arterial roads, with traffic volume and traffic speed. Measurements were carried out during Monday to Friday, the working days. Field measurements have been taken by using the KIMO DB 300/2, automatic sound level meter for 24-h duration. Monitoring was divided in two parts as per CPCB guidelines, day time 6.00 am to 10.00 pm and night time 10.00 pm to 6.00 am [8]. The sound level meter is calibrated prior to each measurement using a calibrator. Sound level meter is mounted on a tripod at 1.2 m above the floor level. The counts of number of vehicles that crossed the point of measurement from either direction on the road were recorded by videography. Vehicles were divided into five categories like 2-wheelers (motorcycle, mopeds), 3-wheelers (auto rickshaw), 4-wheelers (cars), bus, and truck. The speeds were also monitored with a hand-held radar gun along with the noise level. Table 1 depicts central pollution control board (CPCB) standards.

Noise monitoring was done on each location using KIMO DB 300/2 sound level meter. This instrument was set for A-weighting continuous 24 h and all the readings were taken as per CPCB protocol. LAeq with a 1-s sampling frequency was set in the sound level meter. Hence, for one individual location, 57,600 readings of day time and 28,800 readings of night time were recorded and stored. Hence, for all three zones, 35 lac readings were recorded and stored. Noise descriptors like Lmax, Lmin, L10, L50, L90, and LAeq, were assessed and are given in Table 2 for all locations.

Fig. 3 depicts the day time noise indices viz. LAeq, of different locations of South-West zone during the working days (Monday to Friday). It clearly shows that the highest LAeq observed was 76.6 dB(A) at B4 location. The day time LAeq observed on all locations of South-West zone was greater than the prescribed CPCB limits during day time, which is 50 dB(A) for silence zone, 55 dB(A) for residential area and 65 dB(A) for commercial area.

Fig. 4 depicts the night time noise indices viz. LAeq, of different locations of South-West zone. Maximum LAeq was observed 73.3 dB(A) at B14 location and minimum was recorded 65.7 dB(A) at C3 location at night time, which was greater than the prescribed CPCB limits during night time. All recoded LAeq values were above the prescribe CPCB limits.

Tables 3 and 4 give the classified as well as total traffic volume count at all 31 locations of South-West zone for day time and night time, respectively. 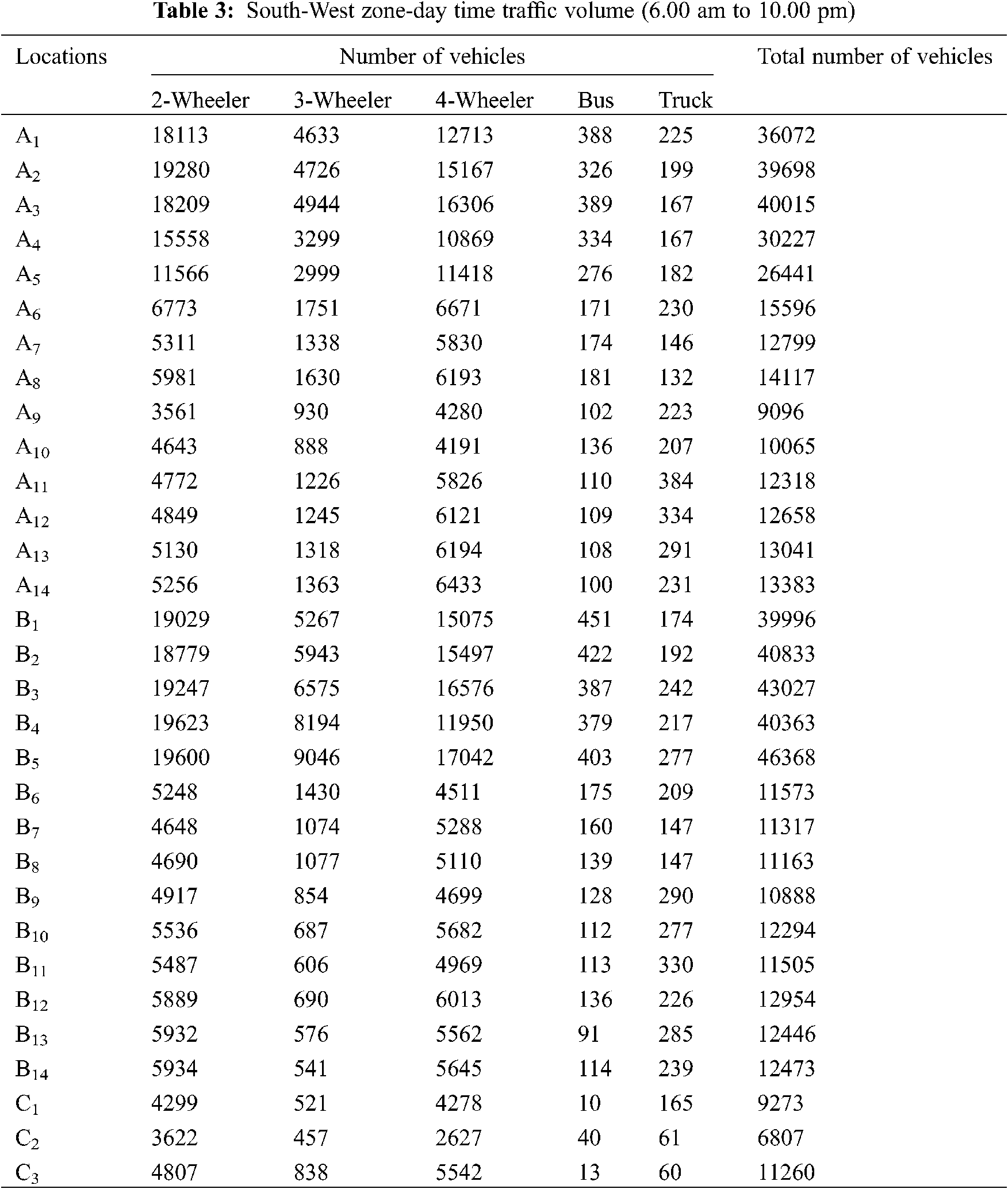 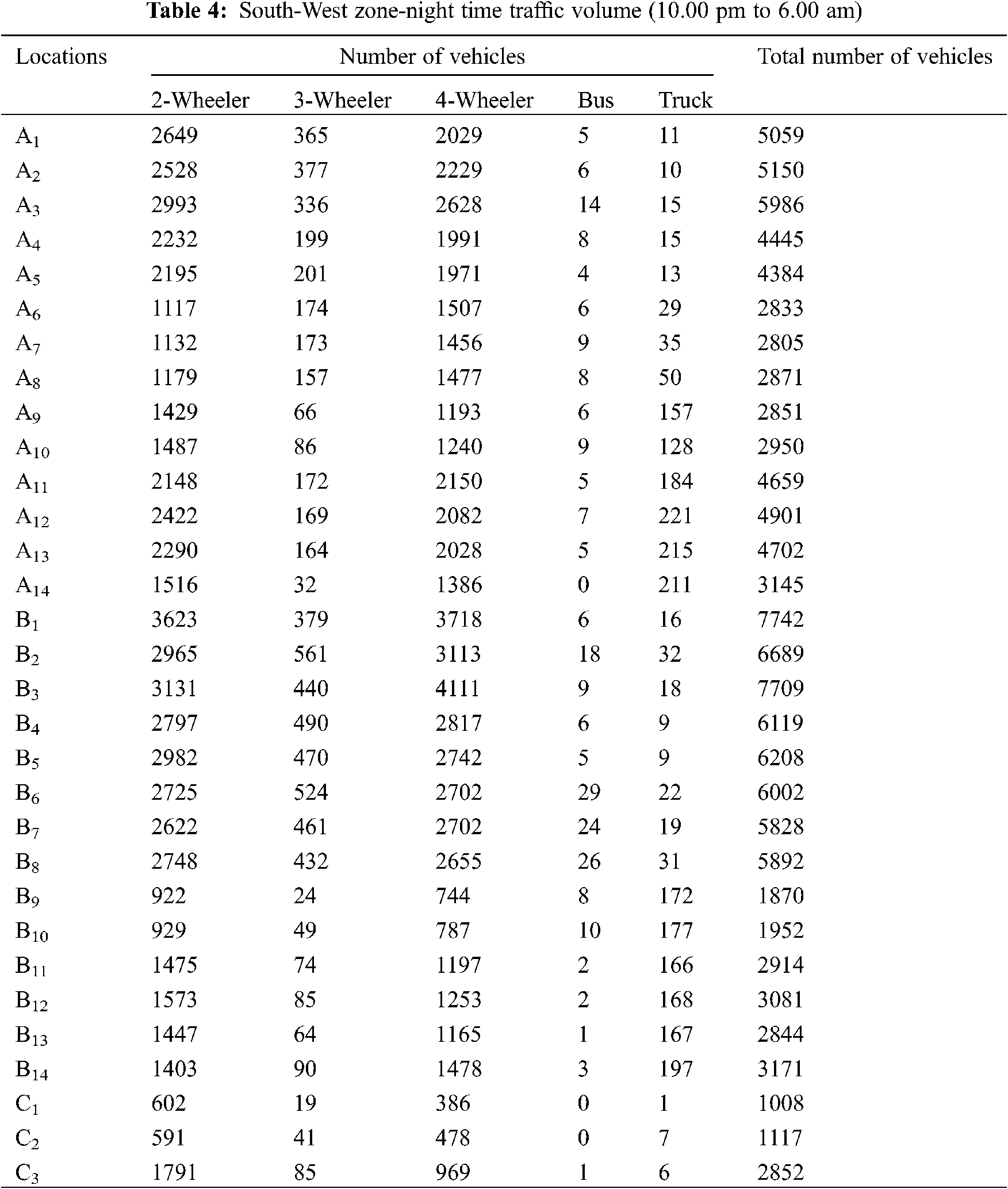 The traffic volume composition for day and night time at different locations of South-West zone in the study stretch was evaluated from the classified vehicular count data. Figs. 5 to 8 depict the composition of all category of vehicles for Athwa-Dumas and Magdalla-Udhna road, both for day time and night time.

All the traffic volume count, collected on arterial roads of South-West zone are shown in Figs. 5 and 6, which depicts that the composition of 2-wheelers and 4-wheelers was more on arterial road during day time (almost equal). 3-Wheeler had the least share 10% to 20% amongst the selected categories of vehicles. Since, the selected streets are arterial roads, heavy vehicles, i.e., buses and trucks are banned in municipal corporation limits during morning 9.00 am to 1.00 pm and again during evening 5.00 to 9.00 pm. This is the major reason for buses and trucks count being low as 1% to 2%. The 2-wheeler and 4-wheeler frequency were more during day time. Figs. 7 and 8 depict that on Udhna-Magdalla corridor during night time the truck frequency is slightly more, when compared to morning time, which is major reason for high levels of night time noise.

Spot speed survey was carried out using Falcon Radar guns. Two radar guns were employed to collect the spot speed data of the vehicles. This survey helps in determining the approach speed of vehicles. This survey was carried out on a working day. The spot speed of different vehicular categories was collected for every 15-min, 5 sample of each category vehicles. Readings of average spot speeds of individual vehicles for all zones sampling locations are given in Tables 5 to 6.

The sample size was random and was adopted depending on the traffic count. The speed survey was carried out for the day time 6.00 am to 10.00 pm and night time 10.00 pm to 6.00 am. This spot speed data can be used in adopting the speed distribution for different vehicular categories to be considered in noise model.

Spot Speed Study concentrates on measuring the speed characteristics at predetermined area under the natural conditions.The present spot speed studies are coordinated to assess the movement of rates of vehicles in a surge of activity at a particular region on a roadway. In this present study, the average speed of various category of vehicles are determined and analyzed.

Acknowledgement: I am thankful to S.V. National Institute of Technology, Surat for cooperation and assistance.