Abstract: In this manuscript, we analyze the solution for class of linear and nonlinear Caputo fractional Volterra Fredholm integro-differential equations with nonlinear time varying delay. Also, we demonstrate the stability analysis for these equations. Our paper provides a convergence of semi-analytical approximate method for these equations. It would be desirable to point out approximate results.

Nowadays, the study of differential equations with nonlinear time varying delay has attracted a wide-ranging interest [1–4]. Meanwhile, few research texts have been based on the theoretical aspects. It is worth to construct an accurate strategy that will facilitate the task of many scholars, followers and experts later. In mathematics, stability of the system is a mathematical property which deals with the behavior of the dynamic systems and corresponds to the convergence of solutions of differential, integro differential and fractional equations [5–12].

It considers as a suitable central role in the study of fractional system [13–15]. This work is perhaps the best straightforward technique to generalize the related papers [16–21].

In [21], Soliman et al. carried out a detailed and comprehensive analysis of fractional Volterra Fred-holm integro-differential equation with constant delay. Likewise, our present study motivated, constructed, continuously developed thus far parallels and properly cited (inspired) by the results of the above work [22–26]. It also includes analysis extensively, but differs significantly about the aforementioned work. It is an attempt to generalize different precedent works and in order to achieve a notable contribution with its counterparts. For more details, this context relied on the appropriate analysis of some linear and nonlinear problems described by fractional integro-differential equations with variable delays. More precisely, we receive a noticeable attention to the nonlinear integro-differential equations with nonlinear time varying delay as in [17]. So far, the strategy of the current research contains four beneficial items. At the first, existence and uniqueness of the solution of the proposed problem will be examined. Secondly, we will provide the readers with the stability and the convergence of this solution. At the end, we shall suggest a method and its convergence therein. This literature consists of five sections. Some basic definitions and theorems are introduced in the first section. Indeed, the suggested problem is discussed and analytical explanation of the proposed problem is detailed in section two. Some Important properties of the solution is mentioned in section three. A modified method is explained in section four. Finally, An experimental example is illustrated in section five.

The most commonly notations, definitions and theorems are mentioned. The presented preliminaries are related to our paper.

Definition 1.5. The Mittag-Leffler type is defined as

at b = 1, a > 0 the previous equation becomes the classical Mittag-Leffler.

t is the independent variable.

L > 0 with the following property: For each u(t) satisfying

then some solution u0(t) of the above equation such that

Definition 1.8. The sequence of functions converges uniformly on a set D if there exists

Let u and v be nonnegative continuous functions on some interval t ∈ [a, b]. Also, let the function f(t) be positive, continuous and monotonically non-decreasing on [a, b] and u satisfies the inequality

Then, there holds the inequality

Let (U, ‖ . ‖) be a closed, convex and nonempty subset of a Banach space C[a, b], suppose that σ:U → U is a continuous mapping such that σ(U) is a relatively compact subset of C[a, b]. Then σ has at least one fixed point in U.

2  Analytic Explanation of the Problem

Throughout this paper, we will consider Caputo fractional integro-differential equation of the form:

through the initial condition:

where refers to the α− th fractional derivative of the anonymous function u(t) ∈ U = C([a, b], ℝ4) which characterized by the Caputo operator, τ(t) is the time varying delay (continuous delay function),

Let us assume the following conditions:

Operate with , we have

Let σ:U → U, for any u ∈ U. Now, we establish the following theorem for the fixed point σ.

Theorem 2.2. The operator σ maps U into itself and it is also continuous on [a, b].

That is, σ maps U into itself. Also, A becomes uniformly bounded. Suppose a sufficiently small number n > 0,

Consequently, we thus conclude that

Then, σu(t) is continuous on [a, b]. Our approach for proving that σ is continuous, we suppose that un converge to u, Then

This is equivalent to

2.1 Existence and uniqueness of the solution for Eq. (14)

In what follows, we will investigate the existence and uniqueness of solution for the fractional integro-differential equation with time-varying delay (variable delay).

Theorem 2.3. Suppose that the conditions Eqs. (16)–(20) hold, then the non-linear fractional integro-differential Eq. (14) has at least a unique solution u ∈ U.

Proof. By analogous proof to the continuity of σ operator.

We conclude that σ is Lipschitz on U with Lipschitz constant Y. It is well known that σ is a fixed point as a consequence of Theorem 1.11., i.e., σ is a contractive mapping. Eq. (14) has immediately at least a unique solution u ∈ U.

Our following attention is focused on checking the stability of the solution u(t) for Eq. (14) in the frame of Ulam-Hyers and Ulam-Hyers-Rassias.

Theorem 2.4. Assume that the conditions Eqs. (16)–(20) hold. Then the non-linear fractional integro-differential Eq. (14) is Ulam-Hyers stable.

Proof. Let u ∈ U be a solution of Eq. (14), D(s) is a continuous and non negative function such that

Now, we are going to apply the integral operator to both sides of above equation, we arrive at

In consequence, the problem (14) is stable in the sense of Ulam-Hyers. This completes the proof.

Proof. Let w ∈ U be a solution of the following inequality

It can be easily noticed that

Let us extend our results to asymptotically stable solution. For that, we shall perform the absolute value for the solution of (14)

In fact, by means of Cauchy Schwartz inequality, we deduce

3  Some Important Properties of the Solution

There is no doubt that there are various properties that characterize solutions. So, we will look at two features, namely continuous dependence of solution and estimates on the solution.

Proof. Also, the proof is similar to the proof of Theorem 4.1.

The ongoing method is distinct and the results improve quickly. We will create the correct functional in the following form:

where λ is a Lagrange multiplier. The solution is defined by the infinite series

The nonlinear function can be written as [16,24]

Here, we give examples (application situations for the applied fractional equation) which clarifying the gained results.

In this subsection, we shall present the numerical results gained by employing iterative methods namely modified variational iteration method with Adomain decomposition method

By the same procedures of the previous example, we have u1 = t.

5.2 Graphical Representation of Solution for Eq. (43)

Firstly, let α approach to 0.5 and n = 1, the obtained solution for this case represent graphically in Fig. 1. 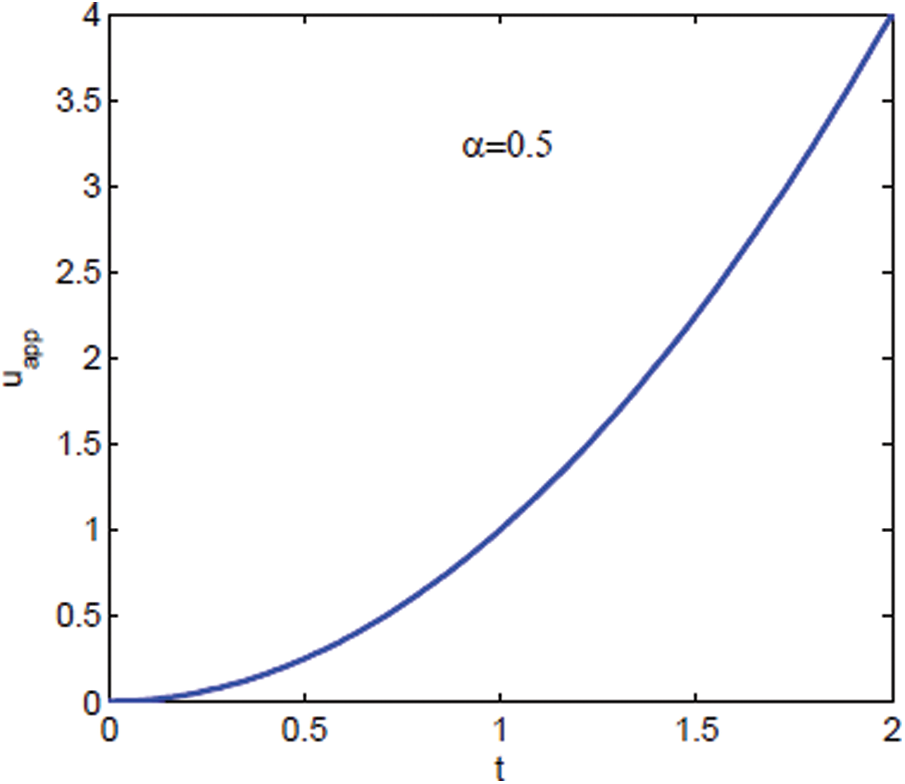 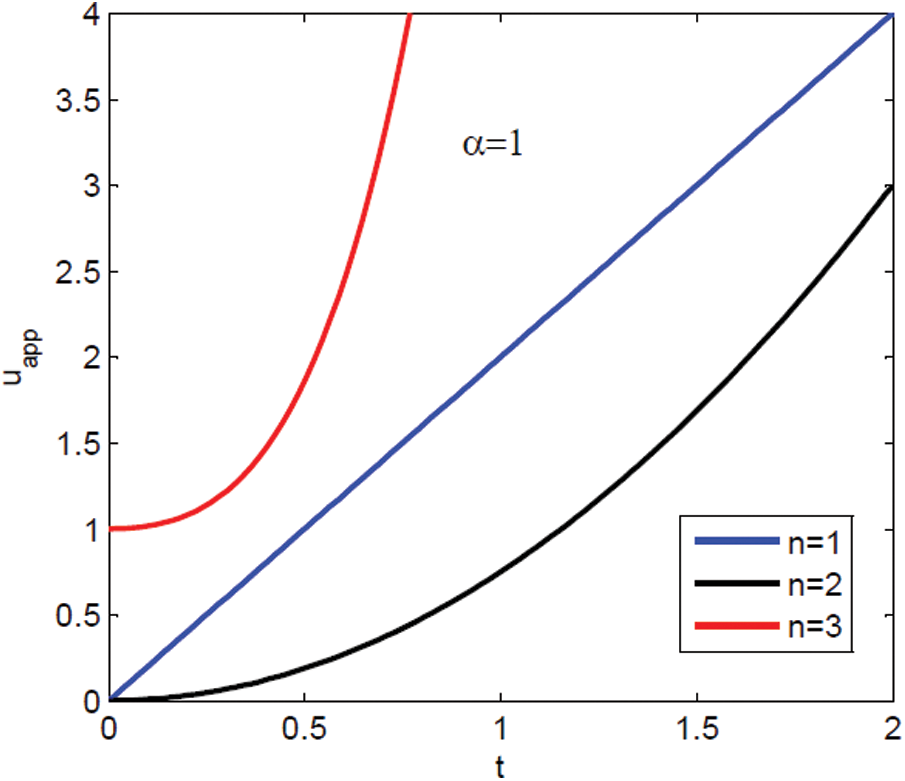 Figs. 1–2 indicate the difference to uapp at different values of n.

We emphasize that the analysis of fractional integro-differential equations with delay attracts considerable attention by many scientists [29,30]. The beneficial contribution of this work was the discovery much of the tools in the analysis process for many equations. It should be noted that the choice of α plays a vital role in the results of the suggested problem and this was evident in the examples that were listed in our research. We find that when the approximate solution and the exact solution apply when a value of α is at a certain value of n, and other than this value of n, the approximate solution is 0.

Acknowledgement: The authors are very grateful to the editors and reviewers for carefully reading the paper and for their comments and suggestions which have improved the paper.